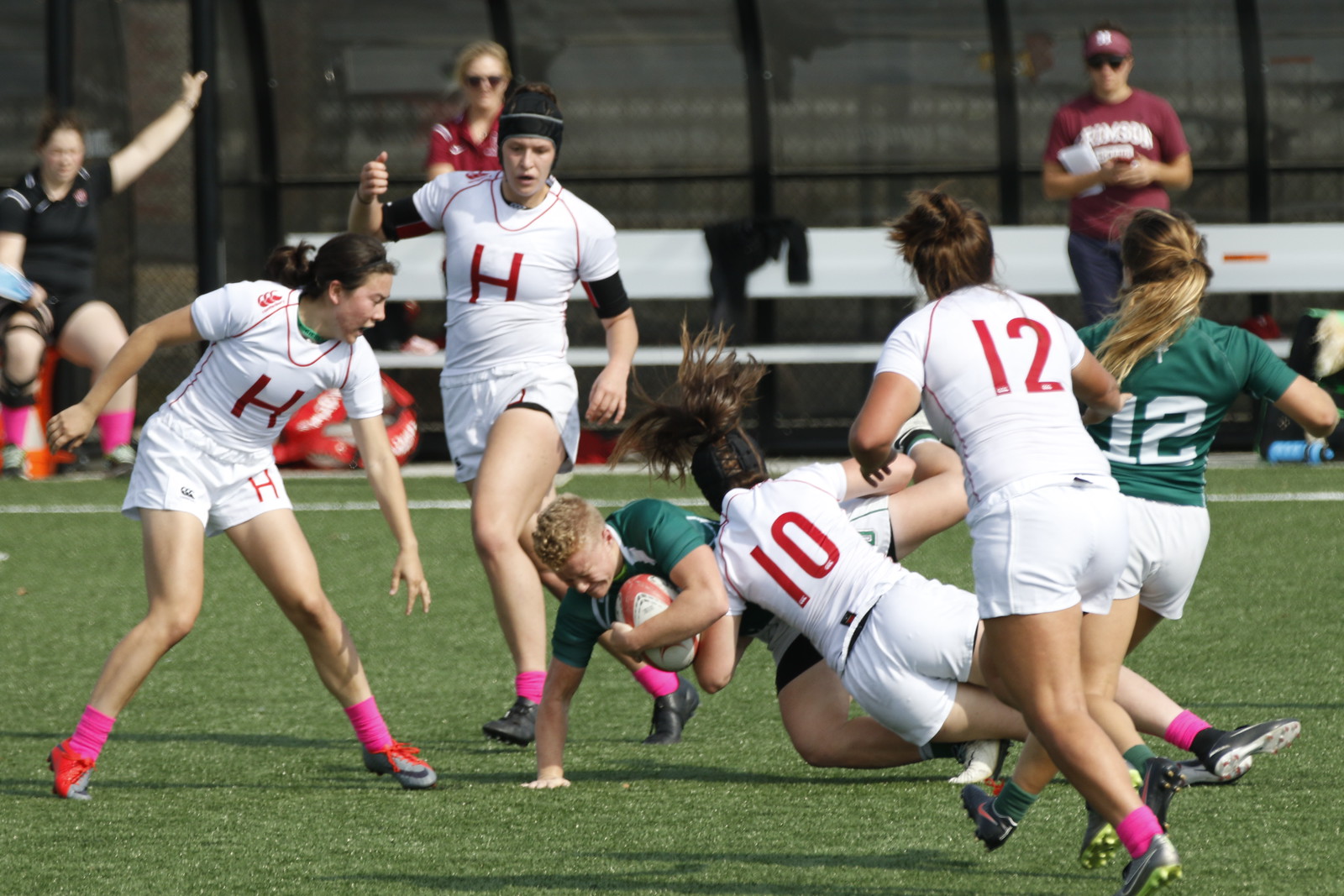 Harvard defenders swarm a Dartmouth ball-carrier in previous action. However, the Big Green stayed on its feet for the most part during its 22-8 Ivy Championship win.
By Kim Arango, Crimson Staff Writer

No. 2 Dartmouth (6-3, 3-0 Ivy), came into the match strong, rattling off a score in the first six minutes. These first five points came on an interception from Big Green senior Frankie Sands, though the following conversion was unsuccessful. Visitors to Brophy Field, No. 4 Harvard (3-2-1, 1-2) was immediately on the defensive.

“This week at practice we really focused on composure under a pressure defense,” sophomore Delia Hellander said. “[It] prepared us physically and mentally for this high intensity game.”

The Crimson’s defense has been its calling card so far this season. The team has two shutouts, and it held Ivy competitor and then-No. 10 ranked Brown to just eight points. However, Harvard allowed 22 on Saturday.

The attack struggled as well. Coming into the match, the Crimson had tallied an average of 63.6 points per game—its eight points marked the lowest offensive output all year.

Harvard did not immediately cave after Dartmouth’s opening score, and the Crimson responded by controlling the majority of the play into the latter portion of the first half. A second try by the Big Green appeared to break the Harvard defense, but it was ultimately not counted.

The scoreline stayed the same until the 24th minute when the Crimson received a penalty, allowing Dartmouth to open up a play on its own terms. Big Green sophomore Becca Jane Rosko proceeded to scored on a try off of the penalty, expanding the team’s lead to 10.

“We definitely brought the physicality and mental toughness to give Dartmouth a run for their money,” sophomore Tori Tong said. “I think we dominated in contact and scrums and staying connected with each other on defense and offense.”

Harvard junior Caitlin Weigel halted a Dartmouth run down the field only to have the Big Green tally a successful try on the opposite side. At 33 minutes into the half, Dartmouth had expanded its lead to 15, before a successful conversion upped the score to 17-0.

Momentum at its back, the Big Green’s Kat Ramage squeezed another score in before the half so that when the whistle sounded, it possessed a solid 22-0 margin.

However, a Dartmouth penalty merited a three-point kick after the whistle. Junior Jenny Kronish took the shot and converted, preventing the Crimson from heading into its locker room with a zero on the scoreboard.

“Our biggest fault in the first half was our poor alignment on defense near the wide channels,” Hellander said. “Once we fixed that, we dominated defensively which enabled us to maintain possession and play our game plan.”

The two teams returned to the second half invigorated and ready to battle for the Ivy League crown. Both Harvard and the Big Green both played aggressively throughout the second stanza, utilizing every minute of play.

For the first several minutes, each side was able to successfully prevent the other from scoring, though there were a few close calls.

The Crimson pushed for a try when junior Ginny Miller passed to Kronish at the line, but Kronish was unable to power across and tally the points. However, it would ultimately be Harvard that scored the only points in the second half. In the 80th minute, with no time remaining, the Crimson scored its only try of the match when freshman Erin Wright forced herself across the line to add five points, making the score 22-8.

With this loss, Harvard moves to 6-9 all-time against Dartmouth.

“I think we’re leaving this match and Ivy season with the knowledge that we have the skills and fortitude to play on a very high level against other challenging teams,” Tong said. “More than that we’re able to go into a match, play our game, come out of it and learn what we need to improve, work on that and bring all of that to our next game.”