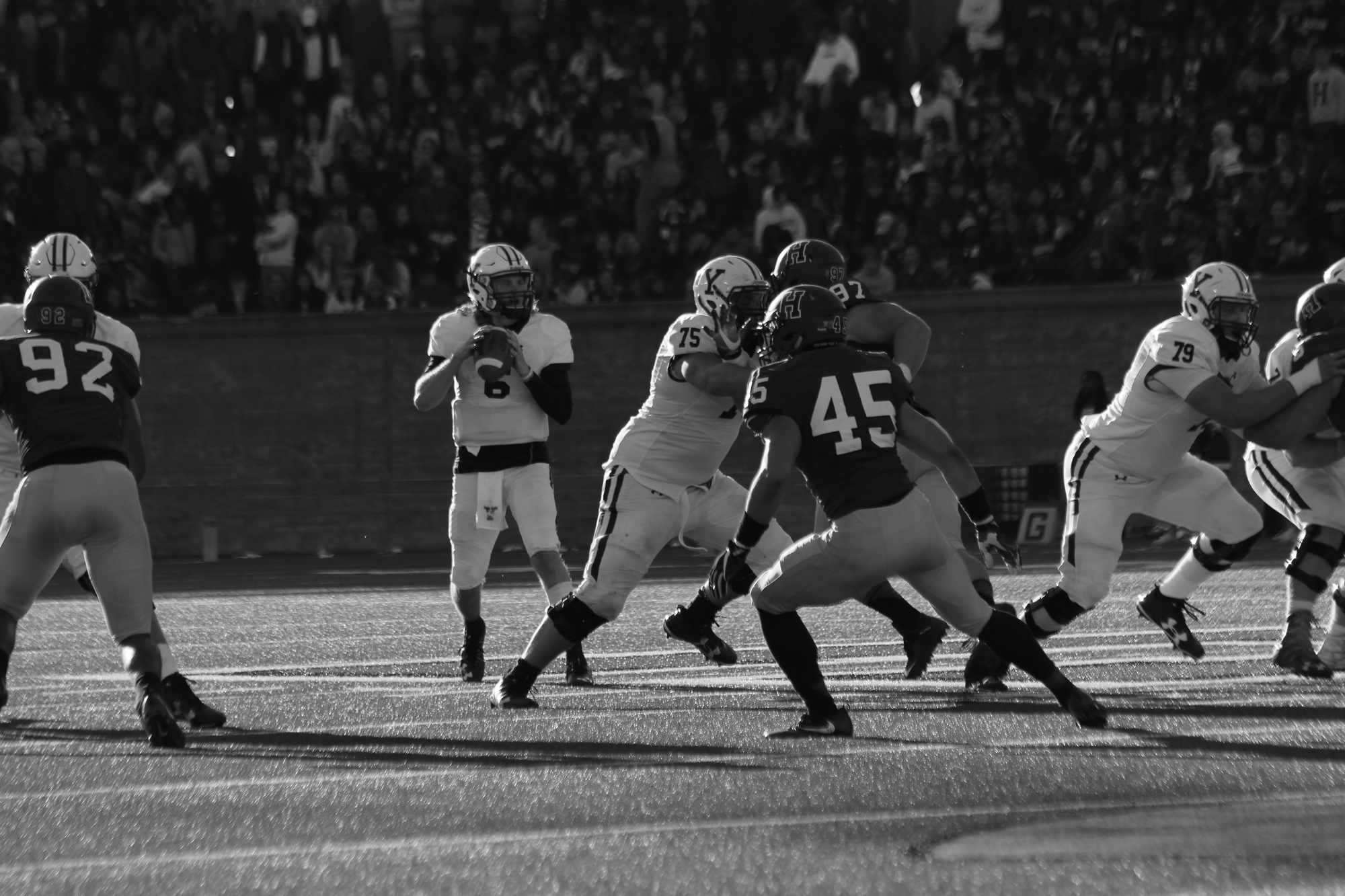 Yale sophomore quarterback Kurt Rawlings surveys the field last year at Harvard Stadium. Yale won its first game against Harvard in ten years in 2016 when Rawlings started as a freshman. Now the team looks to defend its home turf on Saturday and win its first Ivy title since 2006. By Matthew W DeShaw
By Kevin Bendesky, Contributing Writer

While preparing for the Sports Desk’s Yale-Harvard piece, I did what any scholarly columnist ought to do: scoured the web for disparaging Harvard news with which to fill my column. And because every headline was negative, I discovered and prepared to deploy news of the Harvard Institute of Politics granting boy-wiz Sean Spicer a fellowship in the same year that it granted Chelsea Manning one — before buckling under pressure and revoking the latter’s. I read up on how, once again, Harvard’s endowment growth was a lot like the Roman Empire’s: quite impressive before it wasn’t. I was all set to make snide remarks about how Harvard will win a whopping zero fall Ivy League championships.

If I was going to mention all these things in my column—which I of course abstained from doing—they would depict an institution resolutely inferior to our own. But instead, I decided to be magnanimous and overlook these flaws—shortcomings that our (Sterling, wink wink) PR team would have handled far better. But I’ll be the bigger man and focus this article on us, on Yale. Because, all jokes aside, Saturday will be a time—somewhat paradoxically—that is both singularly tailored to, and also entirely indicative of, our Yale experience.

As a history major, my farthest class is in WLH. Or, to stay on topic, about the length of a football field away from where I live. This means I almost never travel up Science Hill. As such, I end up missing the chance to see or even perhaps meet a large part of our student body. Such is the plight of many busy Yale students. We hurry by, task to task, class to class, day to day. But on Saturday, we all have no excuses: Thanksgiving break begins the day before the game. With nothing to do, and (hopefully) no assignments hanging over our heads, all of campus will take to the tailgates. In this sense, the freedom we all have to go to the game is quite unusual.

But one thing that has defined our experiences is that our parties and tailgates will be open to every person who comes — which in this case, is all of Yale. As my esteemed predecessor at the News put it perfectly, The Game is a Yalie’s “chance to yell and scream while surrounded by thousands of your peers, whether you’re the football fanatic or the friend asking what first down is.” And, despite never having met many of the students with whom I’ll share this memorable day — a product of our typical experience — on Saturday, our bond will never be stronger. This makes The Game unique.

For the football fanatic, tomorrow might be mainly about the fact that Yale, one season removed from the bottom of the standings, stands on the precipice of an outright title. This, for the four classes of sports enthusiasts currently attending Yale College, is unique.

And for the many more in the stands who are wondering why the field has so many damn lines, The Game is a chance to rub arms and handwarmers with the entire student body. Because, even if you don’t like football, even if your chief concern is staying awake after tailgating for the first time, you’re sharing that struggle with all your fellow classmates. Thus, for the sports averse, the game is unique in more than the obvious way.

For the thousands of alumni who attend, The Game is both a nostalgic experience and a new, visceral one. Saturday will be familiar for older alumni, who will walk into a packed stadium as they did every Sunday when Yale was one of the top teams in America. Yet, it will be new to see the stands full, in 2017. A returning graduate of any age will see many changes. Two new colleges have been erected and a longstanding college name has been changed. But despite those changes, a return is still a return. More than anything, campus will be familiar, reminiscent of fond memories.

It is impossible for a Yalie, or really anyone, to fully encapsulate what The Game means. But maybe nothing more is needed than to say that it is both something new and also intrinsic to who we are.