After three home games to start the season, the Crimson is set to hit the road for nine straight 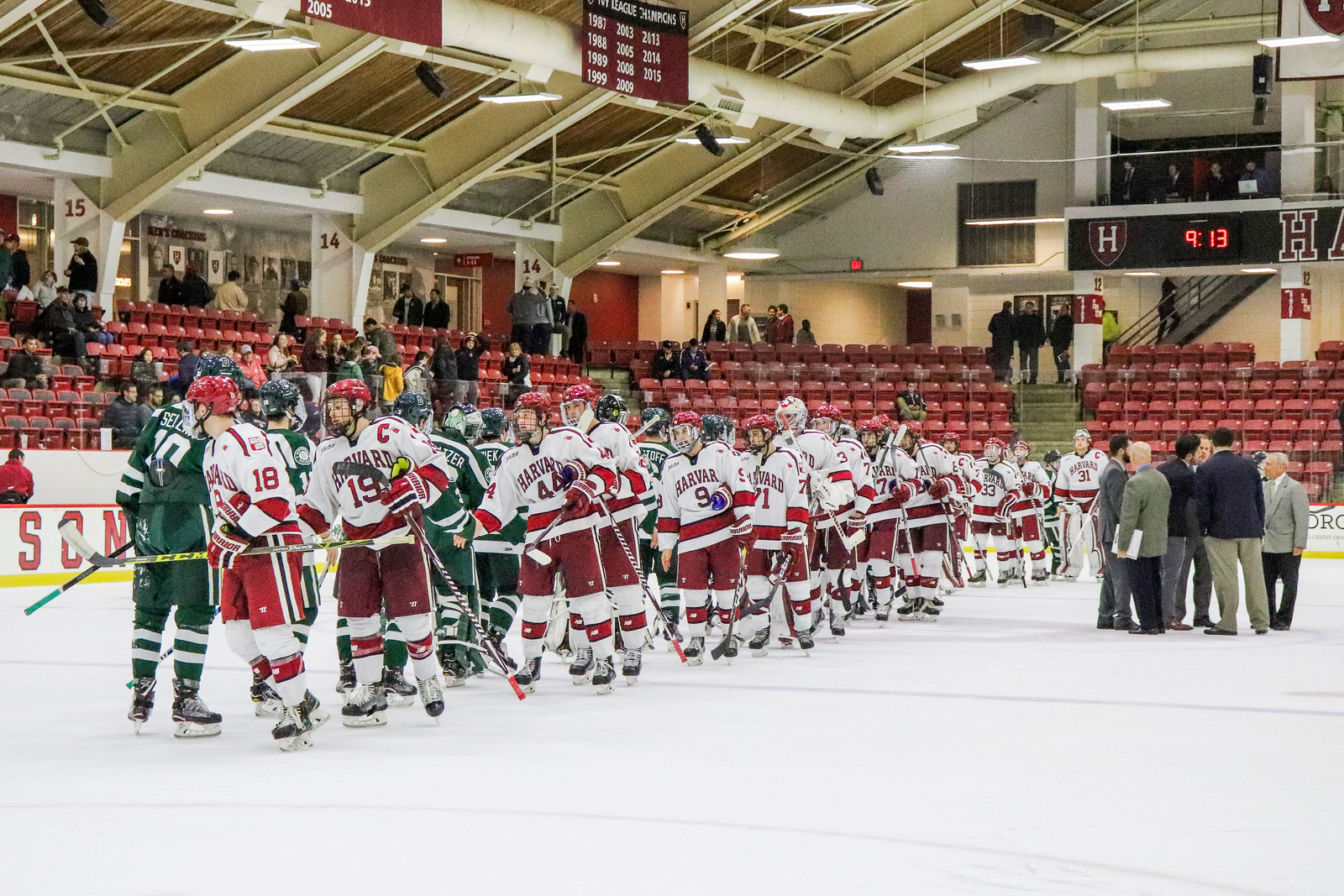 Harvard will savor its final pair of games at home before hitting the road for nine straight. The Bright-Landry Hockey Center was kind to the Crimson last year, as the senior-led squad boasted a 13-0-2 record there.
By Spencer R. Morris, Crimson Staff Writer

That’s how many seasons the Harvard men’s hockey team has played in its current home rink, now named the Bright-Landry Hockey Center. The only exception came in the 1978-1979 season, when renovations to the then-named Donald C. Watson Rink forced the squad to play in local facilities.

In those 62 seasons, never once has the Crimson ventured away from its home ice for more than eight consecutive games—until now. This season, Harvard’s slate includes a record nine-game streak of away contests.

“There’s no doubt that we have a huge upcoming road trip,” sophomore forward Nathan Krusko said. “Those are huge games for us...that we need to rely on at the end of the year to get us in [to the NCAA Tournament].”

In the 2017-2018 season, Harvard will play a regular slate of opponents. Seven non-conference games round out the standard 22 matchups with ECAC foes, with the Crimson visiting and hosting each of the other 11 teams.

The extended road trip, however, is far from ordinary. That stretch runs from early November to the end of the year and features, without a doubt, the stiffest block of competition that Harvard will face all season.

The Crimson will visit Cornell, Minnesota (twice), Boston College, and Quinnipiac, all of whom have cracked the top 20 in the USCHO Division I poll at some point this season. What’s more: These five games are all consecutive.

Since coach Ted Donato ’91 took the reins of the program in 2004, Harvard has seen some comparably long road trips. In 2015-2016, the Jimmy Vesey-led Crimson spent eight straight contests away from the Bright, and in the decade prior, Harvard had three seven-gamers.

In fairness, the length of the road trip is a bit deceptive. After returning from Princeton in early December, the Crimson has its annual four-week hiatus for the winter holidays. So its nine games are relatively spread out, concluding just before the new year.

Besides the copious rest, the team will enjoy a particularly easy Thanksgiving weekend. The “away” game at BC is Harvard’s sole matchup that weekend, as opposed to the usual Friday-Saturday combination. Still, the cross-town rival promises to give the Crimson a run. And playing a third of the season without a home game in between is never easy.

“It’s not like professional hockey where you’re on the road the whole time,” coach Donato said. “We’ll be home quite often in that stretch. We just won’t have a chance to play games at the friendly confines of Bright-Landry.”

Besides, sometimes playing on the road isn’t a bad thing at all.

“I honestly kind of prefer playing on the road,” tri-captain Jake Horton said. “Everything is very structured…. It feels like we’re at home in terms of the hockey aspect and how we’re getting treated, but you just get to focus solely on hockey. There’s none of the other distractors.”

Beyond the sheer length of the “roadie”, Harvard will experience the thrill—and challenge—of playing in some big-time rinks. It’s tough to match the atmosphere inside Minnesota’s 3M Arena at Mariucci, and BC fans always pack the Conte Forum. Plus, Cornell’s Lynah Rink is beyond rowdy for the fish-filled Harvard game each year.

Because of their intense settings, these matchups may present Crimson freshmen with novel and uncomfortable situations. TD Garden in early February is quite possibly the only environment that compares to these fierce barns. But Harvard’s rookies will not have experienced the Beanpot in time for the upcoming away contests. 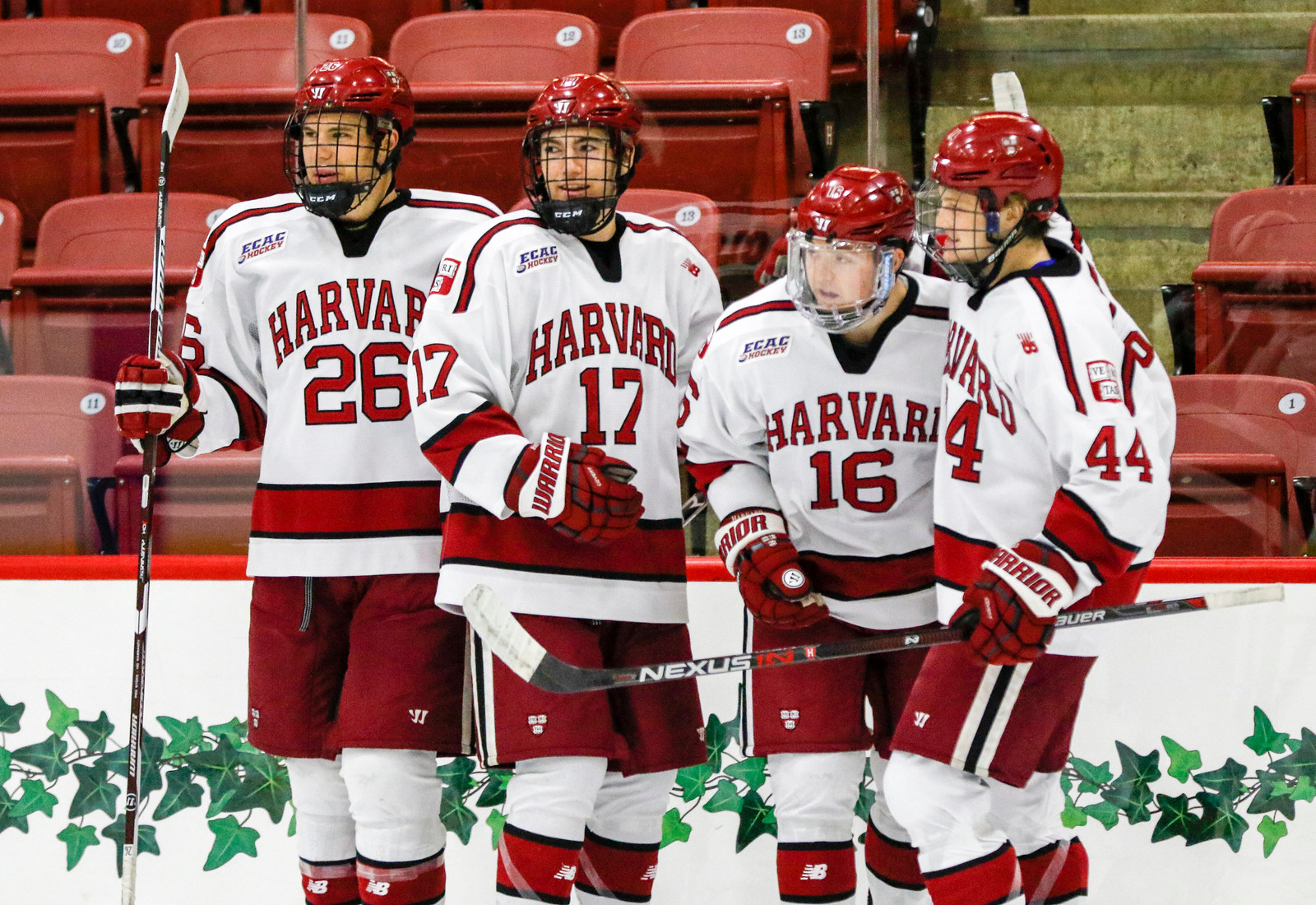 The Crimson hopes to be celebrating just this like all season. While on the road, Harvard will rely on its dynamic offensive talent, headed by junior Ryan Donato (#16), to carry its scoring in hostile away rinks. By Timothy R. O'Meara

Subsequently, one of the team’s major tasks in preparation for its long stretch of road play is to ready its youngest players—many of whom play key roles in Harvard’s game—for the big stage. Luckily, the returning players’ experience in the Frozen Four last season should help.

“We’re going to have to do an incredible job talking to [the freshmen], getting their minds right early on, letting them know to be comfortable and be confident,” Krusko said. “Right now, I’m playing with two freshmen, so I really have to carry the load now there.”

And the freshmen are eager to learn.

“It’s really exciting to be able to experience my first taste of other teams’ fan bases and atmospheres, and other college hockey arenas,” freshman forward Jack Badini said. “Nine games is a lot, but hopefully we use it to our advantage…. It’s a great test for us early on this season.”

The Crimson opens the long away spell at Colgate. The Raiders have been an ECAC bottom-dweller of late, so Harvard should have minimal trouble with them. The schedule escalates the following evening, however, when Harvard heads to Ithaca, N.Y.

A senior-led squad downed Cornell, often the Crimson’s toughest Ivy League foe, in all three meetings last season. Nevertheless, this game annually is a toss-up due to the high-energy atmosphere in Lynah. In the last decade, Harvard is 5-7-1 when visiting Cornell, including two ECAC Quarterfinal losses in 2009-2010.

Competition only gets stiffer by mid-November when the Crimson visits the Twin Cities over Harvard-Yale weekend. Harvard has seen Minnesota only once in the last five seasons, but this year the Golden Gophers will entertain the team on back-to-back nights.

That weekend is the litmus test of the Crimson’s season. When the two teams meet, the Golden Gophers will have played seven more games than Harvard, and against some of the nation’s best competition. Minnesota also boasts the second-highest NHL draft pick (8th overall) among NCAA players this season in freshman forward Casey Mittelstadt.

Whether the Crimson icemen pass this test or not, a hungry BC team will be waiting for them when they return to Boston. The Eagles are already in desperation mode after going 1-5-1 to start the season thanks to an obscenely difficult first month. All five teams that BC faced in October were ranked, including No. 1 Denver and now-No. 2 St. Cloud State. The Eagles’ early exposure to elite competition will put pressure on Harvard to quickly find its game legs for the contest on Commonwealth Ave.

The meat of the road trip finally in late-November with the Quinnipiac matchup. The Bobcats, led on the blue line by preseason all-ECAC selection Chase Priskie, are frontrunners to compete with the Crimson for the ECAC crown this season.

Ultimately, Harvard’s performance and growth on this road trip will define its season. Formidable opponents, big stages, and the normal adversity that comes with playing on the road all will be working against the Crimson.

“The most important aspect of any team sport is improvement throughout the year,” coach Donato said. “This will give us a chance to really evaluate what we have, what we can do better, and where we’re at. They’re huge games. However, we hope that we’ll play well enough that we’ll have opportunities to have really important games at the end of the season as well.”

The ECAC includes multiple quality teams, but it’s no Hockey East—nor is it the Big Ten or the NCHC. In order to remain atop the NCAA rankings with St. Cloud State and Denver, Harvard needs to prove that it can compete with the best teams. This season’s road stretch is the Crimson’s chance.