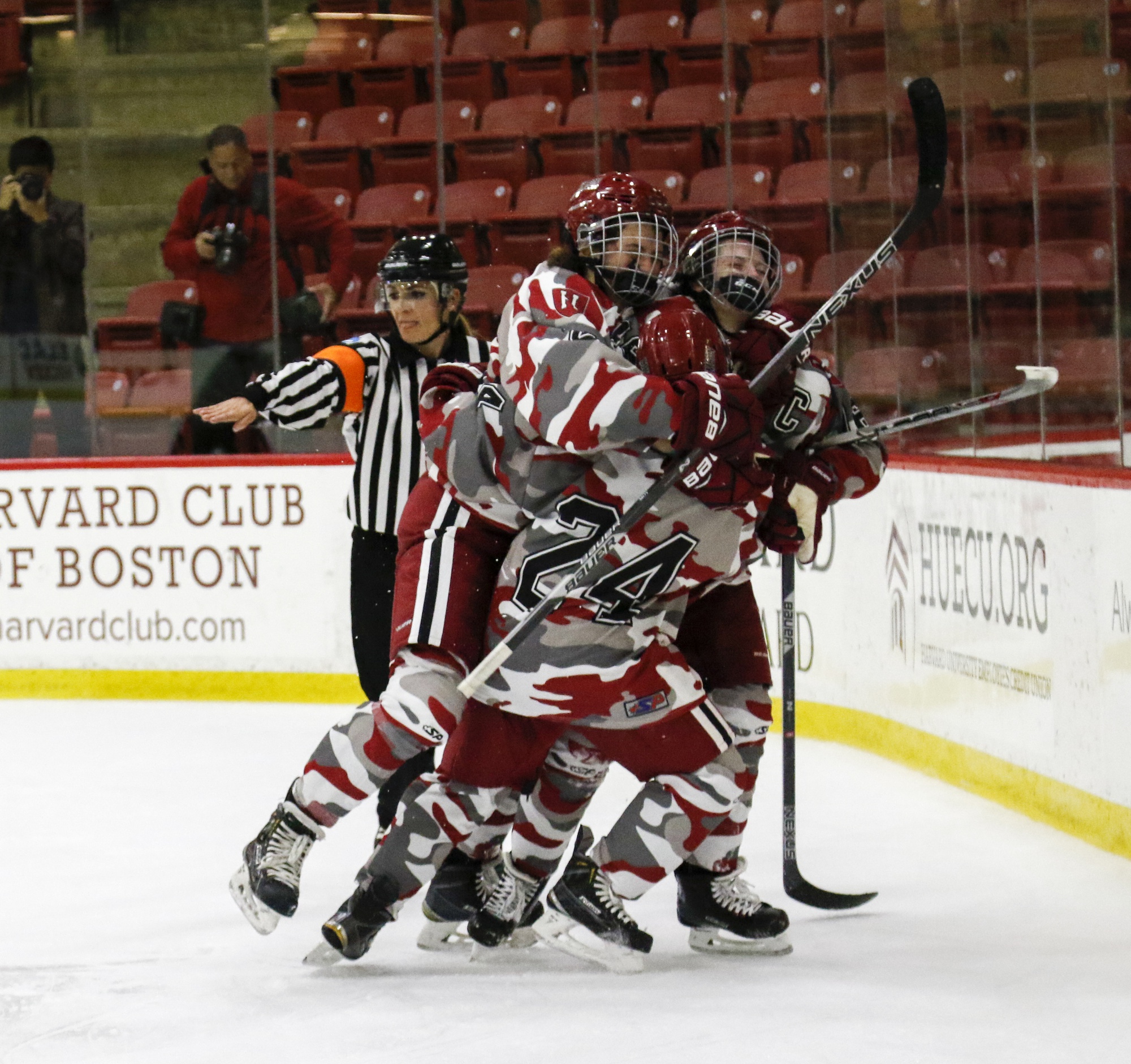 By Sean B. Chanicka, Crimson Staff Writer
Crimson players celebrate after a goal in an early win against Dartmouth. By Timothy R. O'Meara

Before 2016-2017, the last time the Harvard women’s ice hockey team won five games or fewer was its second season. That was back in 1979-1980, when it started the season with six consecutive losses and never quite recovered. The team finished with a record of 4-13.

Thirty-seven years later, the Crimson struggled to a 5-19-5 mark, racking up the most losses in team history. For Harvard head coach Katey Stone, though, the journey is nothing new—entering her 23rd season, Stone has experienced everything from 15-game winless streaks to 33-win seasons.

This is just part of the process.

Heading into the 2017-2018 season, though, the players donning the Crimson have set out to prove that last season was nothing more than an aberration in the rich, decades-long history of Harvard women’s hockey.

To this end, the Crimson has gotten off to the right foot, going 2-1 in three straight matchups against ECAC opponents to start the year. Harvard’s victories have been comfortable, too, as it has outscored its opposition, 9-4.

An even better sign for the team is that these results exclude the Crimson’s exhibition contest against McGill—Harvard dominated a McGill team that picked up 29 wins last season in a resounding 6-1 victory.

Ostensibly, last year’s 5-19-5 record seems like a big step back from the Crimson’s usual winning ways. However, those who watched the 2016-2017 games closely might know that the team was more the victim of bad timing than of bad team play.

Of Harvard’s losses, nine were by just one goal. Of its wins, only one came by the same margin. One stray shot or one extra pass could have been the difference between last year’s record and the one from the year prior, where the team went 17-12-3, ultimately losing to Colgate in the ECAC quarterfinals.

This year, the team is making sure to take the extra steps necessary to put away close games.

“Every week, we’re talking about what we need to do to be better going forward,” co-captain Kate Hallett said. “A big thing that we’re emphasizing is taking last year and learning from it. This year, we want to focus on playing a full 60 minutes, and holding each other accountable.”

Roster composition is another noticeable difference coming into this season. After graduating several key seniors, the 2016-2017 team relied on production from several of its freshmen and sophomores.

In addition, of the 21 members of last season’s roster, six were freshmen. With an extra year of experience under their belts, these players come into this season hopeful to build off their progress from last year.

“A huge piece of playing well is your relationship with the team and the comradery,” Hallett said. “Having another year to be with one another is only going to help us get better on the ice. 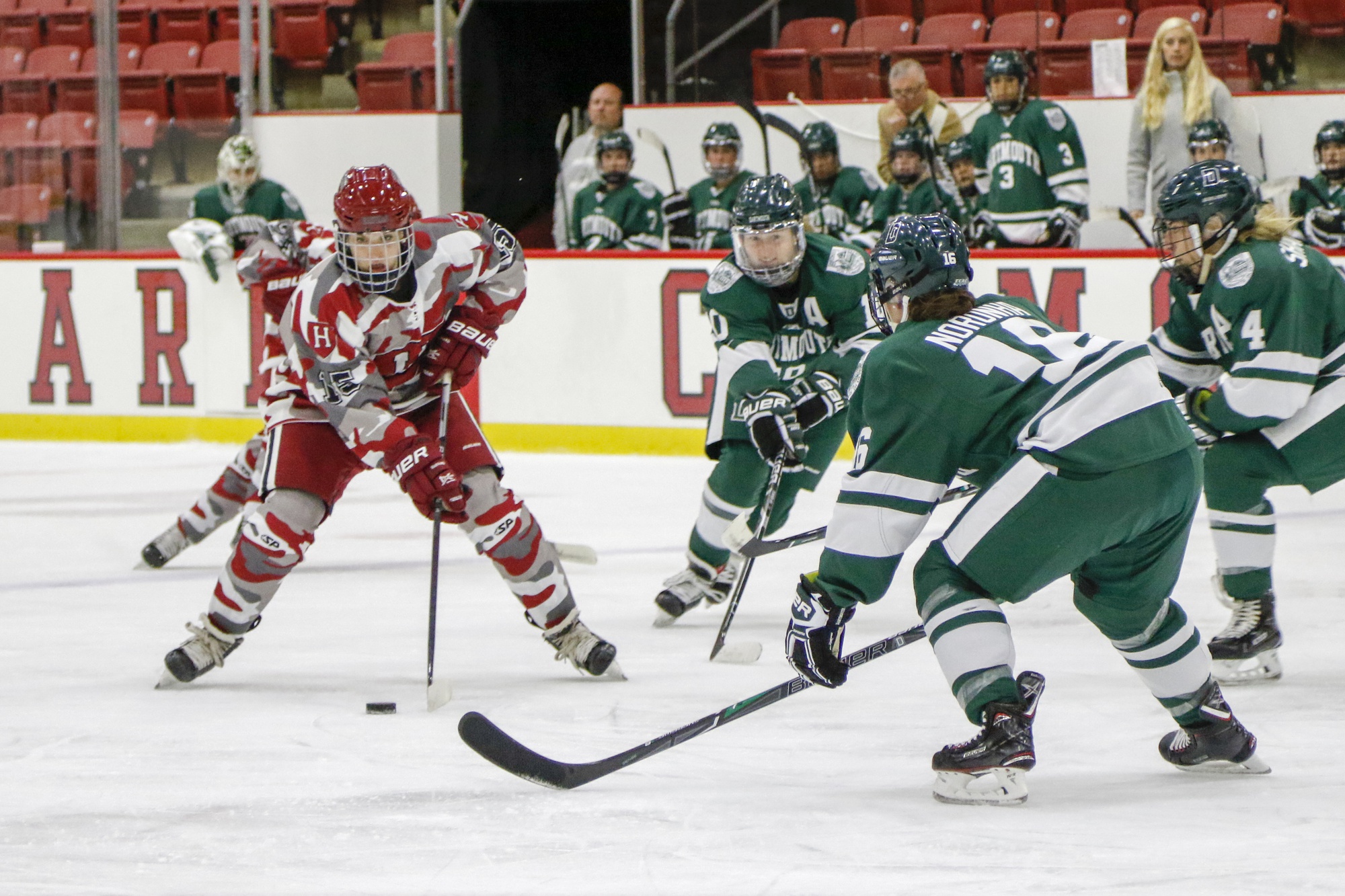 One of those players in particular is sophomore goalie Beth Larcom. As a freshman, Larcom was limited to just eight starts, as she was listed behind then-senior Molly Tissenbaum on the depth chart.

“Beth worked really hard all summer to put herself in the best possible position to help us win games,” senior defender Dani Krzyszczyk said. “Her hard work has definitely translated on the ice and has given her a lot of confidence, especially in high pressure situations. I also think she, like many others on our team, are really focusing on having fun and enjoying the moment”

Larcom has also anchored the team in making 75 total saves, good for a 93.8% save percentage. It is no surprise that she has been a big part in Harvard’s 2-1 start to the season. Larcom is just one example of how an extra year of growth and opportunity will help this year’s team going forward.

Bolstering the play of the team’s returners are eight rookies new to the Crimson roster. Although it’s expected that it will take time for freshmen to adjust to playing at the collegiate level, the Harvard freshmen this year have exceeded expectations.

In fact, the newcomers have been key to the team’s hot start. Freshman forwards Lunasa Sano, Keely Moy and Brooke Jovanovich were the reason Crimson beat Princeton 3-2 on Friday—the three rookies scored one goal apiece to make up the totality of the offense.

With only a few graduated players, the Tigers team is essentially the same one which defeated Harvard in both of its matchups last season. Friday’s result provides yet another look into the team’s potential as the season picks up.

Helping to oversee this change and acclimate the freshmen are the team’s three captains. Senior forwards Lexie Laing and Haley Mullins join Hallett in serving as the team’s newest tri-captains.

Laing enters the season a year after leading the team in points, scoring eight goals and contributing 13 assists last season. Following this season, she plans to join the Boston Pride in the NWHL after being selected with the 12th overall pick in the 2017 draft.

Mullins enters the season hoping to build off her career year last season, where she picked up 13 points off nine goals and four assists.

After contributing three goals and two assists in her sophomore season, Hallett finds herself as the Crimson’s first junior captain since the 2014-15 season.

“Having been elected captain was an incredible honor; there’s no words to say as to how much it means to me,” Hallett said. “In regards to preparing myself, I made sure that everything in my life was in check so that I could give myself fully to my team. That way, I can be there for all of my teammates and try to put them before myself.”

Amidst the changes and development of the players, Coach Stone remains the one constant. Anointed the Landry Family Head Coaching position just before the 1994-95 season, Stone has amassed over 450 victories en route to becoming the winningest coach in Division 1 women’s hockey.

In her career with the team, Stone has led the Crimson to four NCAA Division 1 championships, 11 tournament appearances, six ECAC tournament championships, and eight Ivy League titles. Stone’s only time away from the team came in 2013-14, when she served as the head coach for the United States Women’s Ice Hockey team at the Sochi Winter Olympics.

With all of these elements in place, Harvard is poised for success in the upcoming season. However, the team will need to maintain its high level of play if it wishes to stay competitive in the ECAC, which has traditionally been one of the toughest conferences in Division 1. The Crimson remains confident in its ability to rise to this challenge.

“Our team wants to win a national championship, but we also understand that that is not achieved overnight,” Krzyszczyk said. “This year we are really just trying to focus on one game at a time and not looking too far ahead. Every point is important in this league and we are truly focusing getting the next point.”