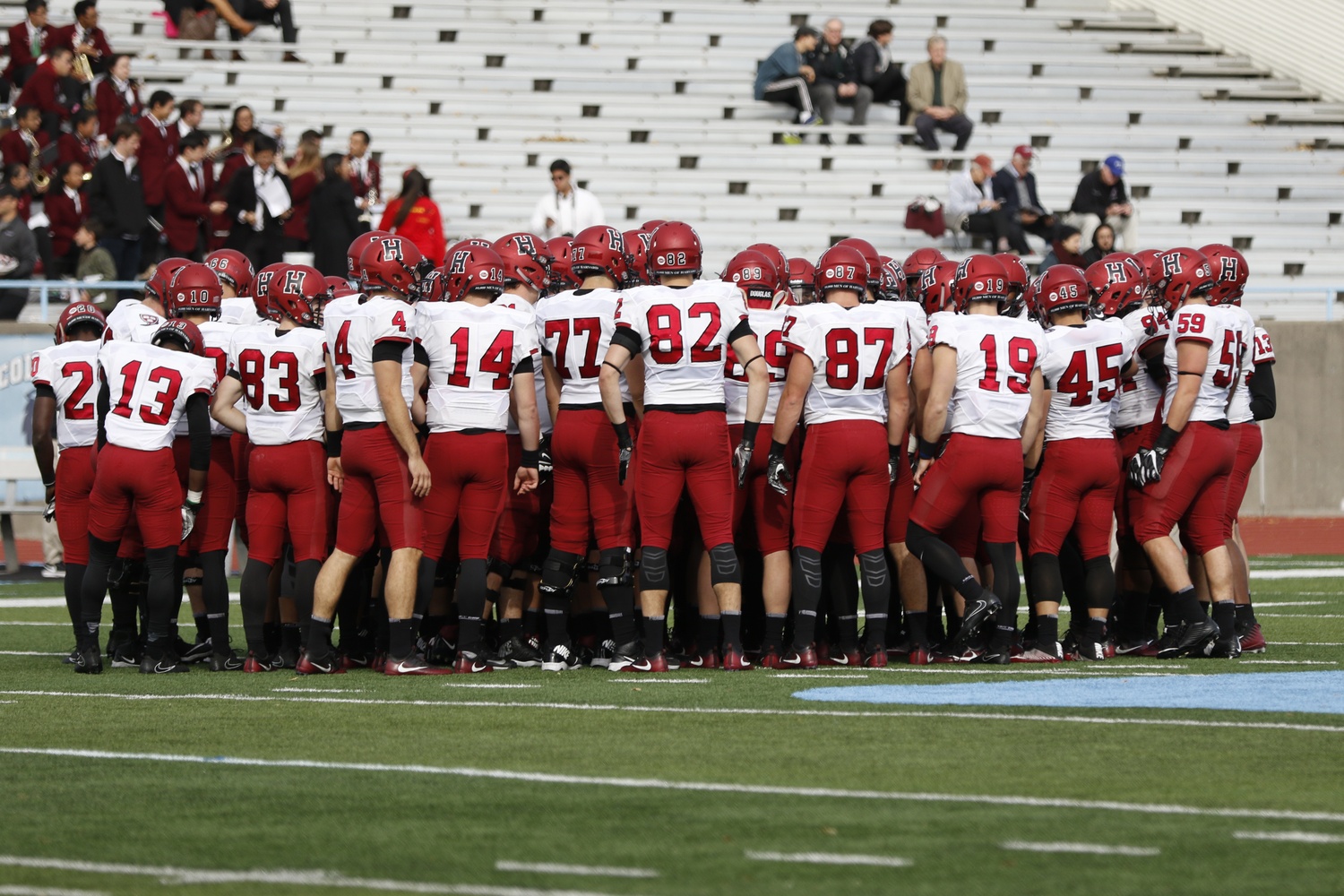 The Crimson huddles up at Columbia earlier this season. By Timothy R. O'Meara
By Sam Danello, Crimson Staff Writer

On Sept. 16, freshman defensive back Ben Abercrombie suffered a major cervical injury in a football game at Rhode Island. He collided with a wide receiver, fell motionless to the ground, and was rushed to a nearby hospital.

Three months later, Abercrombie faces an enormous struggle. The Hoover, Ala., native cannot move his limbs or breath on his own. His family must find ways to pay an ever-growing list of bills—medical expenses, home renovations to create an accessible environment, and other costs.

El Jefe’s Taqueria has decided to help. On Tuesday, the Harvard Square shop will hold a fundraiser for Abercrombie and his family.

During the event—which will run from 8 a.m. to 4 a.m.—El Jefe’s will donate all revenue to The Benson M. Abercrombie ‘21 Fund, which will provide financial help to the Abercrombie family. Customers can pledge extra money by dropping cash in a helmet or signing an electronic kiosk at the end of an order.

“Given the circumstances, Ben and his family are in great spirits,” Athletics Director Robert L. Scalise said. “But there is a long road ahead.”

The Harvard Varsity Club started the Abercrombie Fund on Oct. 4, roughly two weeks after Abercrombie’s injury. The account assists any Crimson player who “incurs a severe or catastrophic injury” during competition. Since then, the trust has gained over $220,000—some for Abercrombie to use and some for future student-athletes.

The fund supplements an NCAA-wide policy called the Catastrophic Injury Insurance Program, which covers medical expenses for injured athletes. However, the mechanism requires a $90,000 deductible and limits use of funds to narrow purposes.

For the past two months, Abercrombie has undergone a trying process of rehabilitation. On Oct. 12, he transferred to the Shepherd Center in Atlanta, which specializes in spinal cord injuries. The Abercrombie family has documented the journey through CaringBridge, a website that allows users to share medical updates.

Abercrombie has experienced slight improvements. He can eat non-hospital food—albeit slowly—and make trips outside the Shepherd Center. Last week, he received a switch device that enabled him to use his iPhone without help from others.

“Ben has started to interact more with his friends via text and social media,” wrote Ben’s father, Marty, in the most recent CaringBridge post. “He can no longer complain about Mom or Dad messing up his text messages!”

The next step for Abercrombie is a surgery to implant a diaphragm pacer. Ultimately, that device would allow the freshman to breath without a ventilator. Doctors have scheduled the surgery for this week.

Besides El Jefe’s, other establishments have held events for Abercrombie. Earlier this month, the Atlanta-based chain WingsZone offered five free wings to all customers and donated $1 for each giveaway. The promotion ran at 80 locations in the United States, including stores in Hoover and Tuscaloosa, Ala., that Ben’s father owns.

In addition, the tag #StandUpForBen has circulated on social media. On Dec. 3, Tampa Bay Buccaneers quarterback Ryan Fitzpatrick ‘05 took the cause national when he wore red cleats dedicated to Abercrombie. One side read “#StandUpForBen,” and the other read “Abercrombie.”

Several members of Harvard football, including head coach Tim Murphy, have visited the freshman. Senior safety Tanner Lee and freshman offensive lineman Josh Hall made the trip over Thanksgiving Break. A week before, teammates had named Lee the season MVP, earning the safety a commemorative watch. While at the Shepherd Center, Lee presented that prize to Abercrombie.

The El Jefe’s fundraiser comes as the most recent effort to support Abercrombie. Owner John Schall announced the initiative in a Nov. 29 email.

Schall has a history of supporting individuals after serious injures. Four decades ago, a car accident consigned his younger brother Mike to a wheelchair. And six years ago, Schall held an event for Brenna Bean, a high school senior who suffered partial paralysis after another crash.

That 2011 fundraiser raised tens of thousands of dollars. On Tuesday, patrons at El Jefe’s will have a chance to do the same.

“Ben is looking forward to a time when he and his family can be at their home instead of in the rehab center,” Scalise said. “Everybody realizes…there [are] a lot of uncertainties of what will happen.”