At a time when some are questioning Harvard’s commitment to free speech, the John Adams Society seeks to challenge what they see as the campus liberal orthodoxy—even if it means meeting in secret.
By Cecilia R. D'Arms and Sarah J. Hong 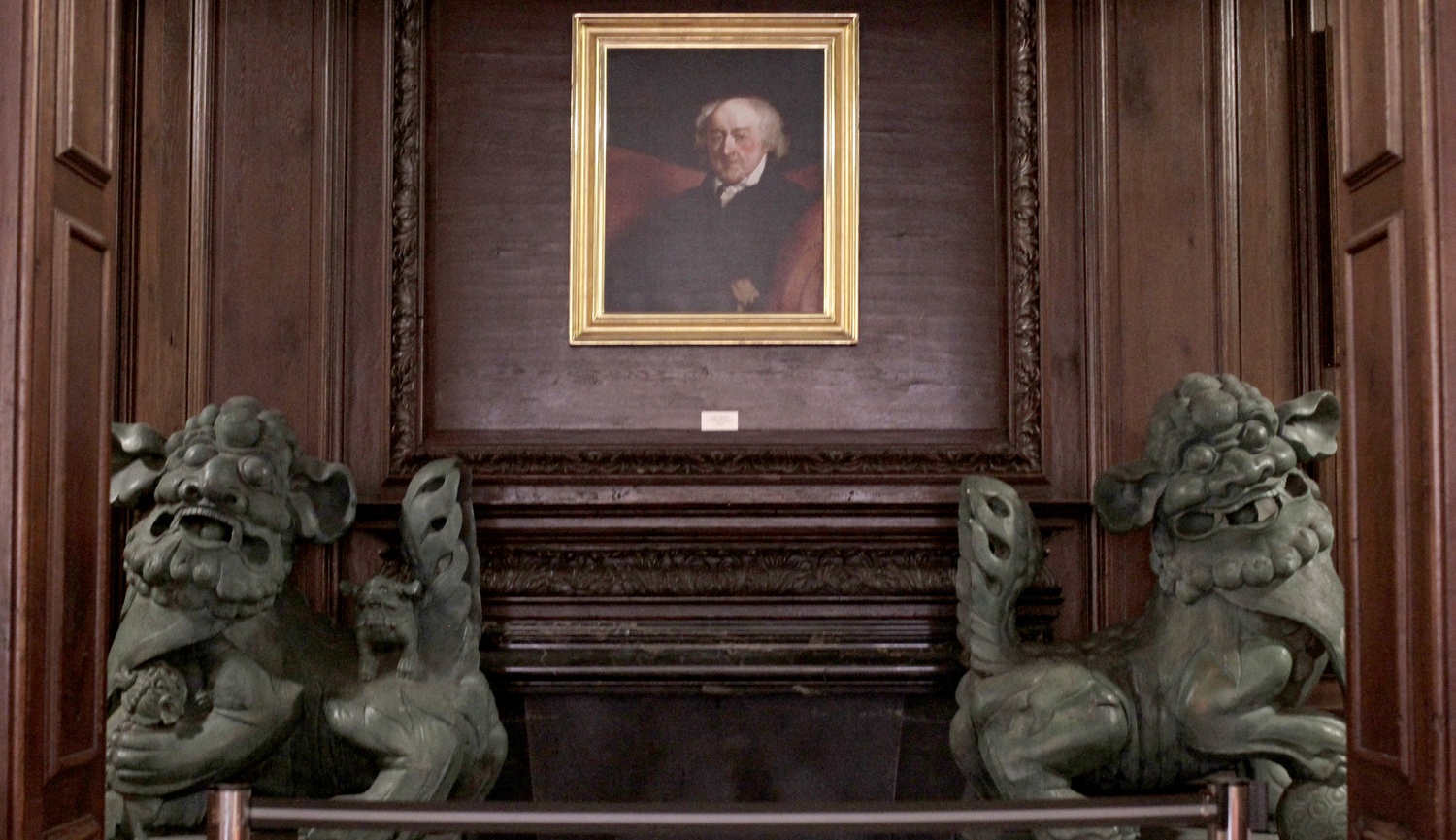 From his perch on a velvet couch beside the whiskey, the 20-year-old Lord Great Chamberlain watches the whole debate unfold.

The Whips sit in a broad circle, Right Honorable Chairman Robert Milton Hope III ’19 at its head. By decree, three books lie on a table to his right: “The King James Bible,” “The Conservative Mind,” and “The Political Writings of John Adams.” Behind his left shoulder stands the American flag.

Directly across the circle sits the Right Honorable Secretary; next to the door is the Sergeant at Arms. When a speaker, pacing in the center, says something the society likes, the members lean forward to pound their legs and their seats’ wooden arms. When a buzzword offends, it is met with hisses.

They call themselves the John Adams Society, “Harvard’s Premiere Debate Organization for Political and Moral Philosophy.” The society meets in the Adams House Junior Common Room up to nine times per semester to debate topics ranging from “Resolved, That a Novel’s Lessons Are Not Its Author’s” to “Resolved, that Conservatives and Libertarians Should Unite In Friendship”.

Their “Guide to Procedure” is 23 pages long, with four of those pages dedicated entirely to the process of delivering toasts. Petitioners must be addressed as “Gentleman” or “Lady,” and, at every debate, the Lord Great Chamberlain is required to, “with alacrity,” announce the “Drink of the Night.”

According to the John Adams Society’s website, the group’s mission is to “aspire to pursue the Truth together as a community of friends.” Members of the group say it provides a space for conservative-leaning students to debate and discuss topics they might not otherwise raise on an overwhelming liberal campus: According to The Crimson’s survey of the Class of 2017, 68 percent of respondents identified as liberal, while only ten percent identified themselves as conservative.

At a time when some are questioning Harvard’s—and higher education’s—commitment to free speech, the small conservative student group seeks to challenge what they see as the campus liberal orthodoxy. Even if it means meeting in secret.

'A Temperament of Socratic Curiosity'

While ambitious juniors dress up to pump the hands of their future bosses at Goldman Sachs and newly punched sophomores schmooze the final club members who will determine their social fate, a select group of freshmen don black tie attire for another purpose: they hope to comp or “petition” the John Adams Society.

The society’s “Information for Petitioners,” inscribed on its website in Latin, asks these petitioners to show “a temperament of Socratic curiosity,” “a strong sense of personal integrity” and an ability to engage with “extreme” perspectives without using “the easy rhetorical calumnies” which it suggests are common in mainstream political discourse.

Despite its gestures to antiquity, the John Adams Society began just three years ago in 2014. Cassandra Kane ’21, who attended a meeting at the beginning of the semester before ultimately deciding not to join, said the group’s preoccupation with the past was off-putting.

“It was just this wild, weird culture of pretending as though it were three centuries ago, kind of like a big blast to the past,” Kane said.

Though the Society’s information for petitioners is quick to note that “There is no political litmus test for membership in the Society,” members say the John Adams Society offers a political safe space of sorts for conservatives.

The Yale Conservative Party’s website claims credit for co-founding the John Adams Society and calls the society its “sister organization at Harvard College.” Harvey C. Mansfield ’53, a government professor and outspoken conservative who has attended some of the group’s events, said conservatives at Harvard often lack a forum for vigorous debate. 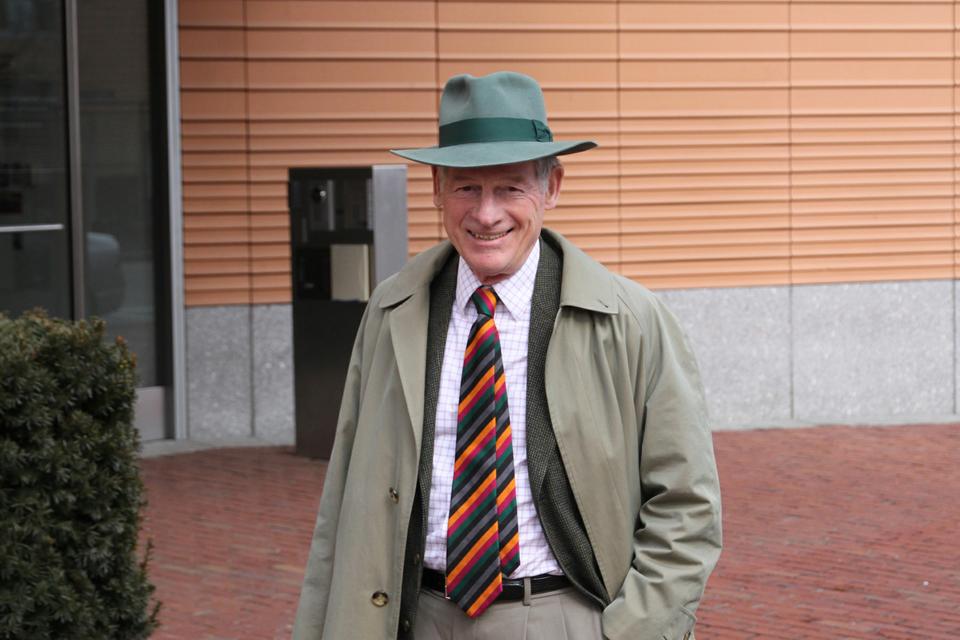 Harvey C. Mansfield '53, a government professor, has attended some of the John Adams Society's events. By Gregory B. Johnston

“As a conservative here, you’re embattled, and just to be together and to talk with people who take what you say seriously instead of merely politely, and find somebody who shares your views, that’s a real pleasure,” Mansfield said.

Kevin R. English ’20, who started a leftist political group on campus last year, thinks “it would be ideal” if more groups on campus could connect people across the political spectrum instead of pulling people deeper into their political niches. Right now, he’s “not sure that anything like that really exists.”

But Thomas P. Moriarty ’19, John Adams’ Right Honorable Vice Chairman, agreed with Mansfield about the value of a conservative group.

“I don’t think there’s anybody who could live in a conservative bubble at Harvard, so for a lot of conservatives, I think it’s very important to have a place to go and develop their views,” he said.

Beyond its political bent, the group also allows its members to engage with new ideas and debates.

“The people in it are the most intellectual and well-read people I know, and I learn something every time I go to a debate,” Portia C. Berry-Kilby ’20, Right Honorable Chief Whip, said.

The John Adams Society summarizes its ideological commitment as a dedication to “exploring the Western intellectual tradition.” On a campus that increasingly values multicuralism and non-Western thinkers, the explicit celebration of a tradition many criticize as narrow-minded is unusual.

Members of the society wrote in an emailed statement that the group’s focus on Western ideas reflects the belief that the Western tradition “has helped shape our college, our country, and our culture,” though they do not believe it superior to other cultural traditions. 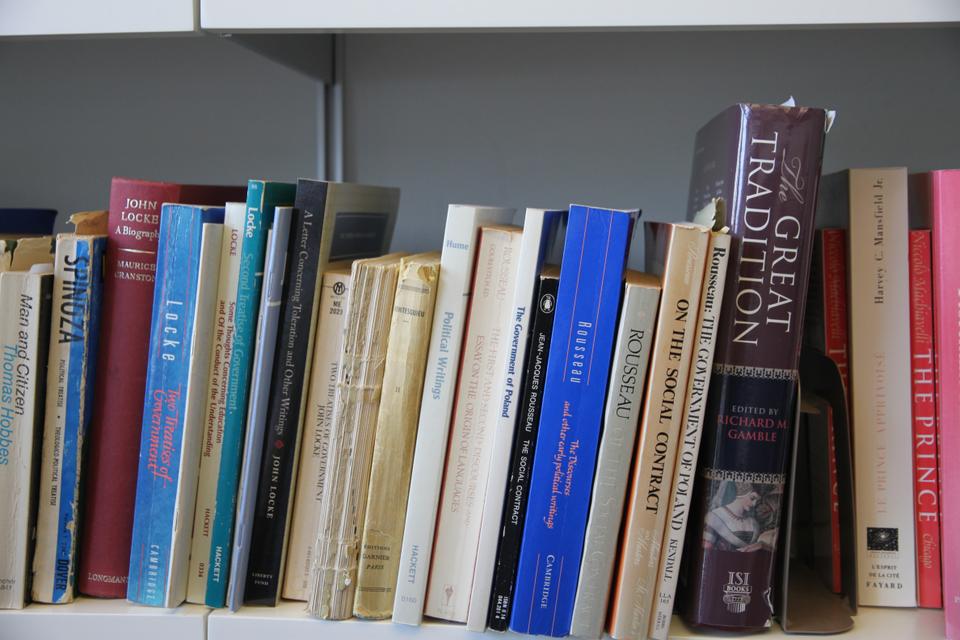 By Gregory B. Johnston

And even as the John Adams Society seeks to engage students in open intellectual debates, Moriarty acknowledged that the group’s members are mostly white men.

“I’m not sure why that is, it might be due to the fact that conservatives in the U.S. tend to skew white. I have to say it’s not ideal that that’s the case, or at least I personally believe that conservatism’s more of a universal thing, it’s for everybody, and I think in general that’s how people feel,” he said.

To begin each debate, Hope enters the room. Every member stands until he bangs his gavel and declares, “I do hereby call this debate caucus of the John Adams Society into order.”

This is the beginning of an elaborate evening of procedures, delineated in the group’s official guide. Besides outlining customs for toasts and Drinks of the Night, the Guide to Procedure also mentions traditions like “dueling” and the singing of “The Purplish Cup Song.”

Although this can be confusing to outsiders, Moriarty said that there is a well-founded reason for the Society’s emphasis on complex procedure: the rigid implementation of rules prevents debates from spiraling into unproductive “shouting matches.”

“Often when people are arguing with each other, if you don’t have order, it can degenerate into a shouting match,” Moriarty said. “And we’ve never had a shouting match at the John Adams Society, because I think the rules go further than simply having decorum. I think the fact that they go further means that nobody’s going to touch the decorum of it.”

As far as what exactly the group argues about, John Adams Society debates cover a variety of topics, exploring how conservative thinking applies to some of society’s most pressing issues. Kane said she remembers sitting in on a debate about “whether War is necessary for man” when she considered joining the group.

In addition to expounding politically conservative ideals, the John Adams Society also puts another ideology at the center of their organization: Christianity.

When toasting, members of the Society can celebrate “God, the United States of America, Harvard College, or the John Adams Society.” And at the end of every meeting, the group sings the phrase “Veritas pro Christo et Ecclesia,” which means “Truth for Christ and Church,” in one of their official songs.

At the close of debate, when the chalice has been passed around and members have sung the Star-Spangled Banner, the students gather together, arms around each other, to sing the society’s song: “Rule, John Adams.”