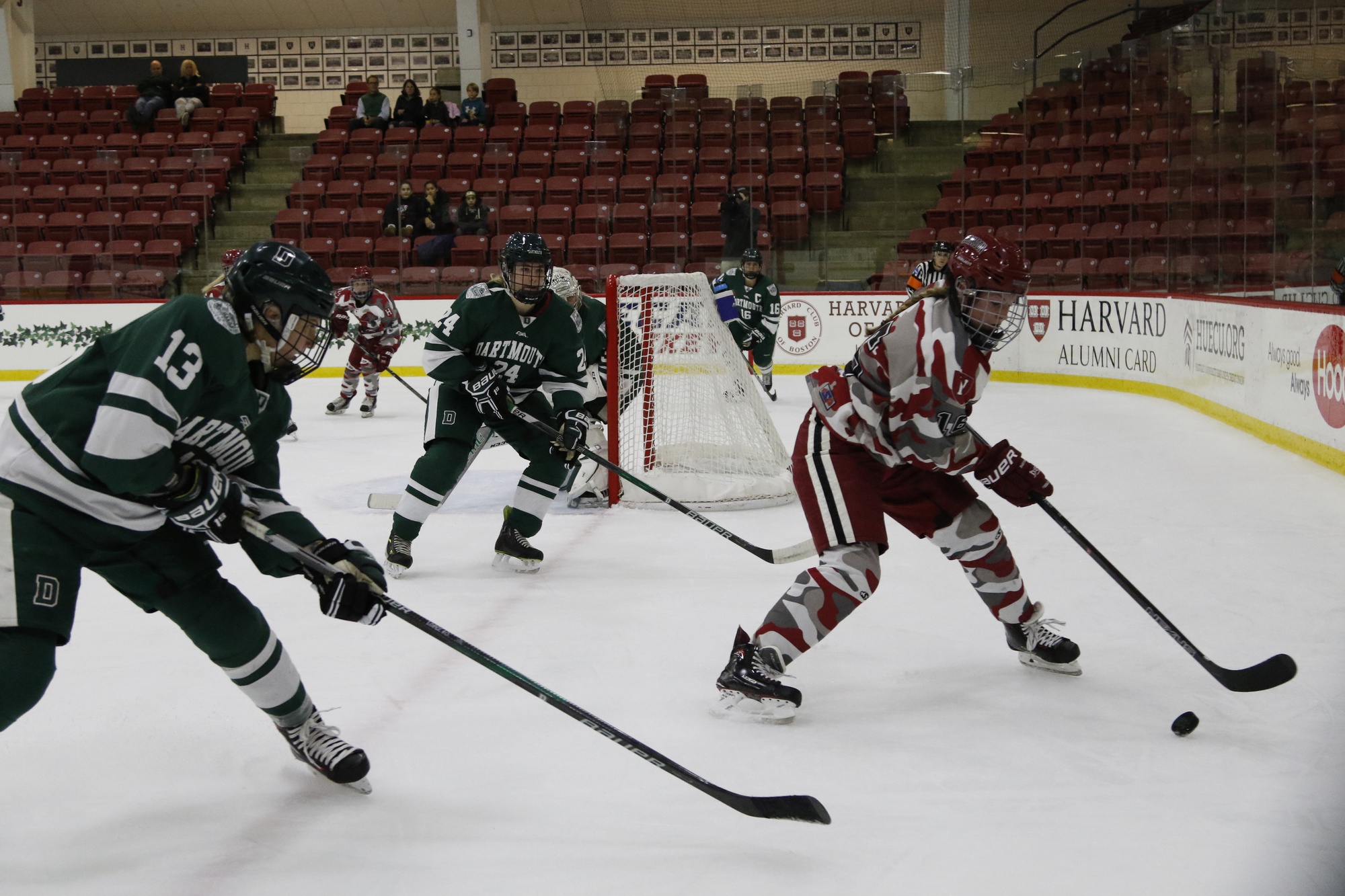 Freshman defender Sydney Sorkin retains possession and looks to find a way out as Dartmouth players close in around her. By Timothy R. O'Meara
By Sean B. Chanicka, Crimson Staff Writer

Coming off a statement win on Saturday against Princeton, Harvard women’s ice hockey looked to keep the momentum going as it traveled to Hanover, NH to face off against Dartmouth. Building off its strong defensive play from the weekend, the Crimson (7-4-1; 5-2-1 ECAC) shutout the Big Green (3-9-0; 1-7-0) 1-0. With the result, Harvard enters its winter break on a high note.

The last time Dartmouth and Harvard had met, Harvard was in control throughout all three periods with strong performances from several players. The underclassmen proved their worth, combining for eight points on the day and freshman forward Becca Gilmore leading the team with three points. The team was just as good on defense, killing six of the seven plays Dartmouth had. While the Crimson continued to work on growth and development over the next couple of months, so did the Big Green, so that this next meeting would be closer than the one in September.

The teams remained locked in a defensive stalemate for much of the match. For the Crimson, junior defender Kaitlin Tse’s play was crucial, as she accounted for 3 of 14 total blocks by Harvard’s blue line crew. In net, sophomore goalkeeper Beth Larcom continued her strong play, making 28 saves and earning her first shutout of the season. With her performance, Larcom raises her season save percentage to .912, placing her amongst the leaders in Division I play. Additionally, her 2.43 goals against average ranked 34th nationwide coming into play. Following today’s action, she is sure to see her spot rise on that leaderboard.

“Beth has had to play a big role this season so far with our two senior goalies graduating,” junior forward Bradley Fusco said. “She’s had a great attitude about it, and she’s gaining more confidence as the games continue on.”

“Our attitude about that is to work hard, pressure them, and don’t give them the time or opportunities they want,” Fusco said. “We want to play smart and fast on power play opportunities.”

Following the second period, both team’s held roughly equal shot totals. In the third, however, Harvard’s offense began to show signs of life. The team outshot Dartmouth 13-7 in the frame, peppering the Big Green goalkeeper with a flurry of shots. Finally, with just 6:23 remaining in regulation, the team managed to break through Dartmouth’s defense for the score.

“Val always has a ton of energy on the ice and gets a ton of shots on net,” Larcom said. “She gets behind the back line and creates so many chances for us.”

On the play, senior defender Chelsea Ziadie played the puck off the board in the defensive zone. Sophomore forward Val Turgeon gathered the loose puck before taking off down the ice. Just as she crossed into the right circle, the Denver, Co. native fired her shot up and over the Dartmouth goalkeeper’s glove for the score. The goal adds to Turgeon’s strong play as of late, as she has accumulated 5 goals and an assist over the team’s past four games.

Following the goal, Harvard’s defense continued to stifle the Big Green attack. With Dartmouth unable to score, the game ended with a 1-0 score line. Following today’s result, Harvard closes out its fall semester of competition. The team will resume play on January 5 and 6, as it travels to upstate New York to face off against Rensselaer and Union.

“We have improved a lot from our first game,” Fusco said. “It’s also important that we haven’t lost an Ivy game yet this season. We do have some tough games coming up, so hopefully we’ll be ready for those. Overall, however, we have done well with a young roster and hope to build upon our success thus far.”

—Staff writer Sean B. Chanicka can be reached at sean.chanicka@thecrimson.com.