Women’s Hockey Comes Up Short at the Beanpot 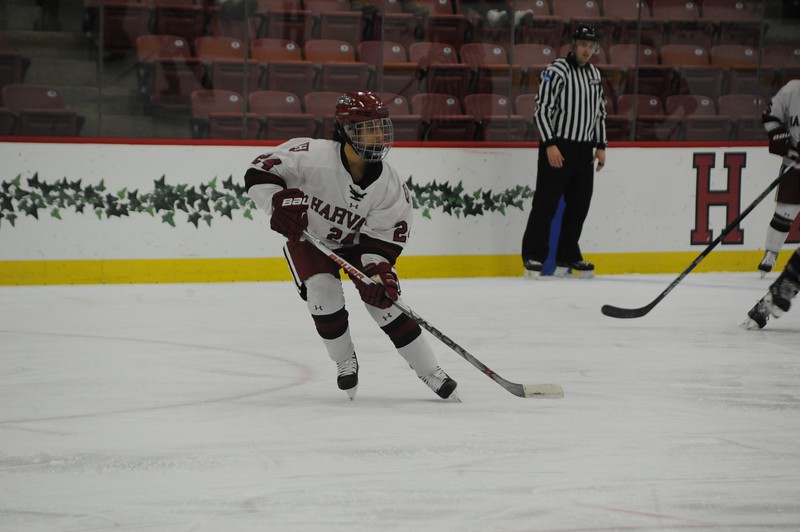 Despite a goal from junior forward Lexi Liang, the Harvard women’s ice hockey team simply couldn’t make up the defecit as a consistent effort from Northeastern took down the Crimson 4-1. The loss marks the second time in many years Harvard saw itself eliminated in the first round of play.
By Julio Fierro, Crimson Staff Writer

Looking to put its ECAC struggles behind, the Harvard women’s hockey team faced off against Beantown rival and host Northeastern in the first round of the 2017 Women’s Beanpot.

For the second consecutive year, however, the Crimson was unable to advance to the Boston tournament’s championship match as a brace by Northeastern winger Paige Savage keyed the Huskies (17-9-3, 12-7-2 Hockey East) to a 4-1 victory over Harvard (3-16-3, 3-10-3 ECAC).

“Obviously [it] was a very disappointing effort from us, right off the bat.” Harvard coach Katey stone said. “We got a little bit better as the game went on but unfortunately we weren’t very good on our own end tonight. We were playing catch-up the entire evening which is difficult thing to do against a good Northeastern team.”

After conceding a pair of early goals during a shaky first frame, Harvard began to find its rhythm offensively and looked to be back in the game as senior defender Natasha Rachlin and freshman winger Kat Hughes setup junior center Lexie Laing.

The Marblehead, Mass. native controlled the puck in the faceoff circle and sent a backhand past Northeastern goalie Britanny Bulgaski to cut the opponent’s lead to a 2-1 margin at 8:49.

Though the Crimson took advantage of the goal to put the Huskies on their heels, it did not take long for the hosts to recover, as Harvard found itself lucky not to concede with just under seven minutes left in the second stanza.

A Northeastern shot at goal triggered a scrum that allowed the puck to linger around the crease before freshman defender Kyra Colbert cleared it right as a Huskies’ stick looked to guide the puck home.

Less than a minute later, the horn went off as Savage bagged her second score of the night to give her team a 3-1 advantage. The senior took control of the puck along the boards and quickly wrapped around the net to easily score, as Tissenbaum was unable to shift stickside in time to prevent the goal.

“My linemates did at all. They pinned the [defense] back and I was able to walk it to the net and put the puck in.” Savage said.

Forward McKenna Brand put the finishing touches for the Huskies, as the junior netted her team’s fourth a mere 18 seconds into a powerplay situation after Crimson junior defender Chelsea Ziadie was sent to the box for body checking.

Things got off to a bad start for the Crimson from the get go, as the Huskies’ front line applied plenty of pressure to the Harvard blue line, not allowing it to establish its footing.

Less than a minute into the game, Northeastern forward Halee Silva took advantage set off the horn for the hosts as the junior redirected rookie defender Paige Capistran’s shot from the point gloveside past Crimson senior netminder Molly Tissenbaum.

Despite Harvard’s attempts at getting into a groove, the team struggled to string together a strong offensive sequence, failing to take advantage of an early powerplay situation after Huskies forward Denisa Krizova was sent to the penalty box for cross-checking.

Just over two minutes after Northeastern returned to full strength, Tissenbaum was forced to recover the puck from the back of her goal once again, as Savage snuck the puck stickside past Tissenbaum from the faceoff circle to double the Huskies’ lead and ultimately give her team all the space it needed.

Stone will look to take advantage of the upcoming games to continue adjusting her squad and make the needed changes to match last year’s third place finish next Tuesday. Though her team has had to deal with issues such as a short bench with a mere fifteen skaters, Stone insists Harvard needs to continue adjusting if they are to get on track.

“We’re going to piece it together the best we can.” Stone said. “No matter what I think we all feel like we could have played better tonight, every one of us. Regardless of the situation, it’s that next man up mentality. We’ve just got to sort through this and find a way to win some hockey games down the stretch.”

—Staff writer Julio Fierro can be reached at julio.fierro@thecrimson.com