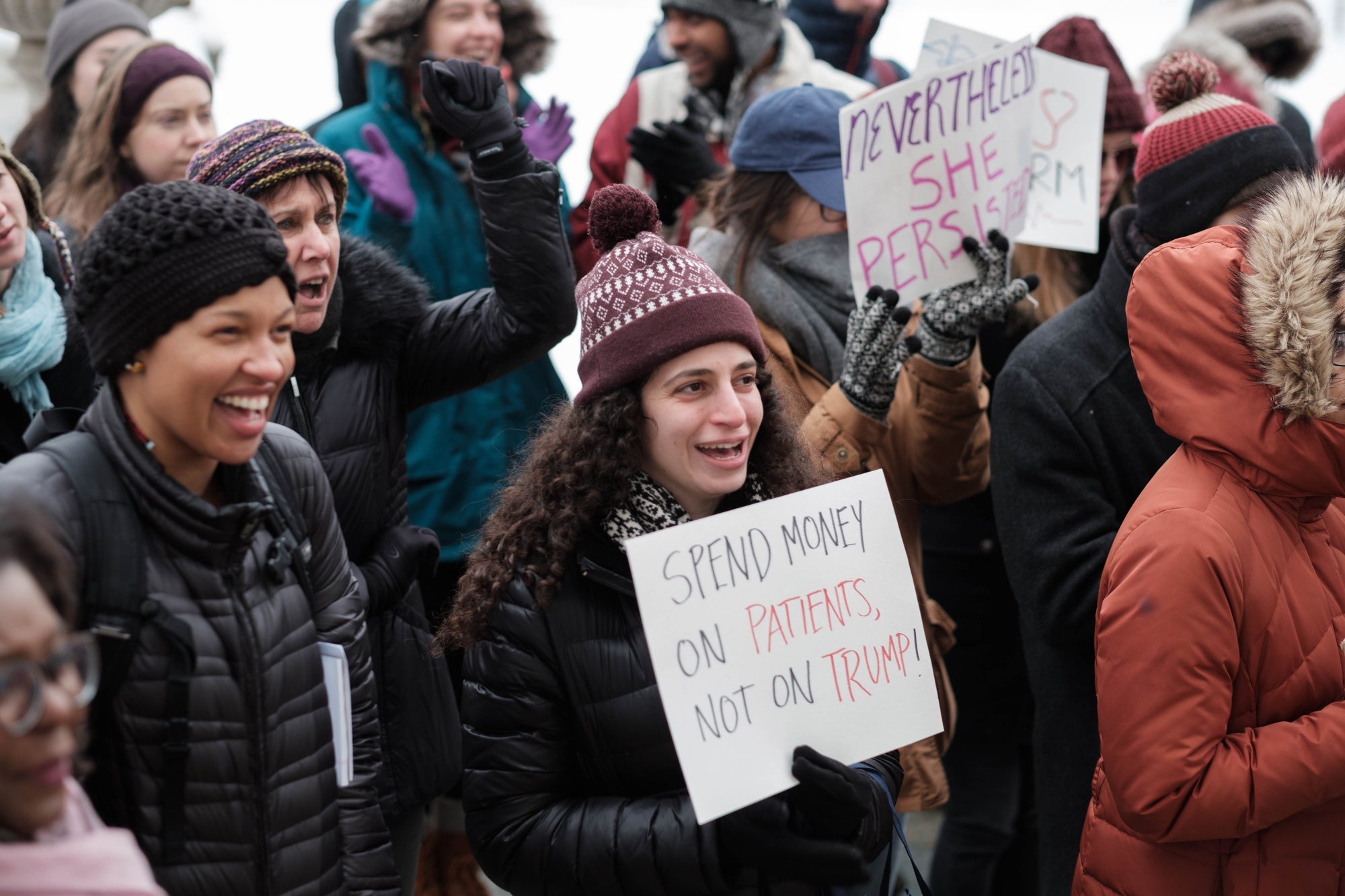 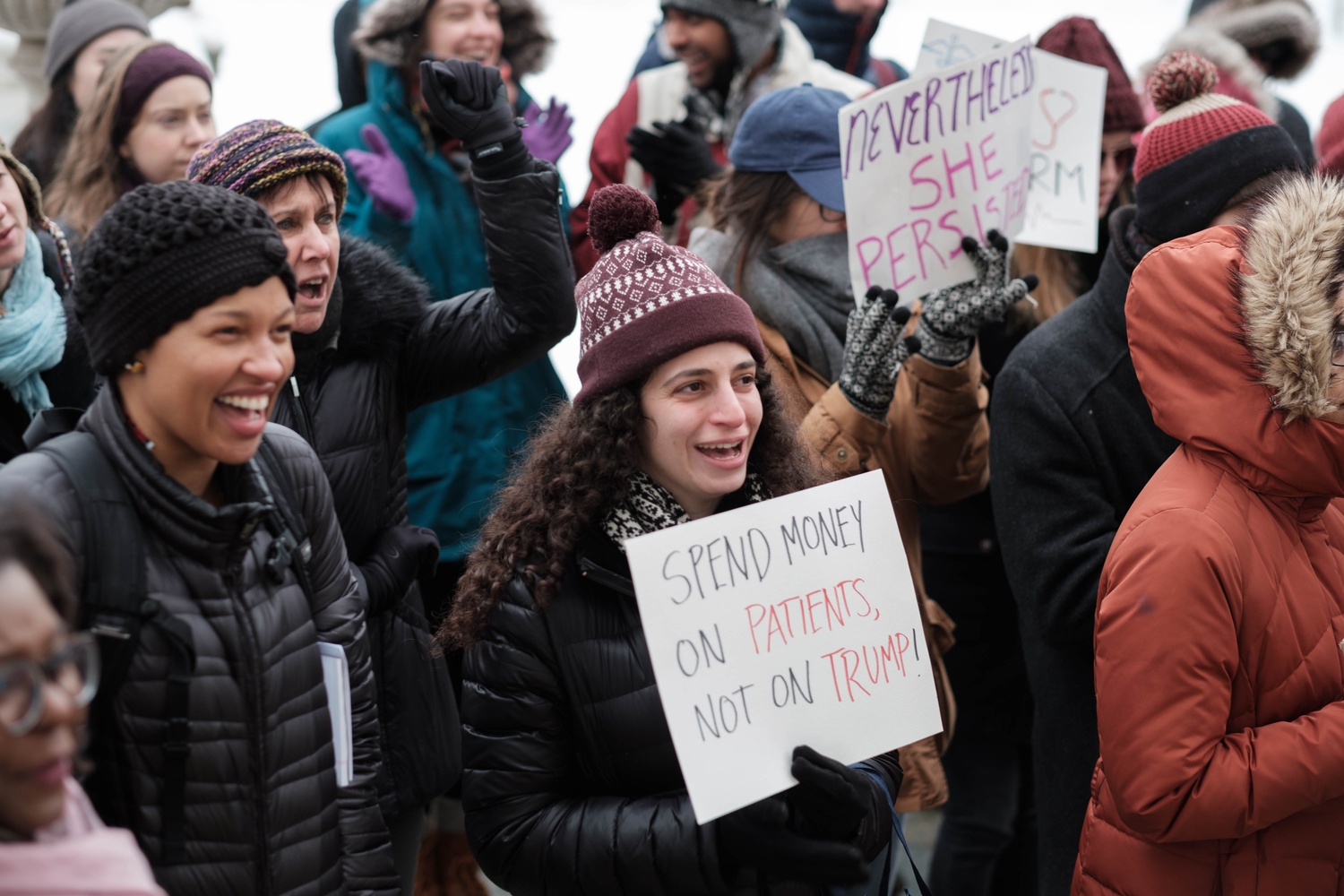 Dana-Farber, a Medical School teaching hospital, announced Thursday that it will keep this year’s annual fundraiser at Trump’s Palm Beach resort but vowed to “avoid controversial” venues in the future. In January, thousands of Medical School affiliates signed a petition supporting the relocation of the event after Trump signed an executive order barring immigration from seven predominantly Muslim countries.

Brandishing signs and wearing warm clothes on a chilly afternoon, the protesters cheered on patients, doctors, and students who spoke at the rally. Many discussed their immigrant backgrounds and thoughts on how Trump’s immigration executive order has negatively affected the medical field.

Celeste Royce, a doctor from Dorchester, said some immigrants have been deterred from seeking medical attention due to fear of prosecution after the presidential order. She urged audience members to advocate for vulnerable patients.

“If we do not speak out against the discriminatory policies, then who will?” Royce said.

Senan Ebrahim, a fourth year M.D./Ph.D. student whose mother is a Syrian immigrant, said he was concerned that many patients abroad—including his own grandmother—cannot seek quality medical care in the United States because of the executive order.

“Today, we are complicit in a grave and growing injustice,” Ebrahim said.

In a statement Thursday, top Dana-Farber administrators thanked patients, faculty, and staff for “their respectful and constructive concern,” but wrote that cancelling the fundraiser “would also be seen as a political statement.” Dana-Farber has paid Mar-a-Lago $150,000 every year since 2011 to hold its annual “Discovery Celebration” fundraiser.

“Our decision last year to continue to rent that facility for this long-standing fundraiser was never meant to be, and does not now intend to be, any type of political statement or endorsement of any political figure or policy position,” President of Dana-Farber Laurie H. Glimcher and Board of Trustees Chairman Joshua Bekenstein wrote.

At the protest, student activists challenged Glimcher and Bekenstein’s statement, which Medical School student Omar Bayomy said focused on “appeasement rather than the issues at hand.”

Bayomy said he respects and supports the Dana-Farber Institute and its mission, but challenged the hospital’s statement that the decision to hold the fundraiser at Mar-a-Lago was not intended to be a political endorsement.

“In my opinion, these issues are not political,” Bayomy said. “We are speaking about human life and the respect and dignity we uphold for such life—this is not politics, this is humanity.”

“We will be cold and be uncomfortable because this matters that much,” said student organizer Colleen M. Farrell to the crowd, which cheered in response.

Several Dana-Farber faculty members made closing remarks and said they were concerned about the Mar-a-Lago controversy.

“When many of us heard about the issue, we thought it would go away,” said Julie-Aurore Losman, a Medical School assistant professor who said many at Dana-Farber were “deeply troubled” by the Mar-a-Lago decision. “We have a moral imperative to not only stand up for our colleagues and families, but our patients.”

Dana B. Sarvey, a Medical School assistant professor who participated in the protest, described herself as “uncomfortable with sitting at home and doing nothing.”

“More physicians need to be involved in healthcare policy,” Sarvey said. “At times in the past, individuals in the medical profession haven’t always spoken up for patient interests for a variety of reasons, but now is the time to speak up. ”

At the conclusion of the event, Farrell encouraged the audience to keep “standing up for all the people in our community.” She described herself as “heartened” and “energized” by the support from not only students, but also faculty members for whom protesting is more “delicate.” Organizers will schedule a town hall meeting in the near future about the Mar-a-Lago event.

“Thank you and this is just the beginning,” Farrell said to the crowd.

A previous version of this article incorrectly indicated that Senan Ebrahim's parents are Syrian refugees. In fact, Ebrahim's mother is a Syrian immigrant, not a refugee.