Athlete of the Week: Aiken Makes His Case for Ivy League Rookie of the Year 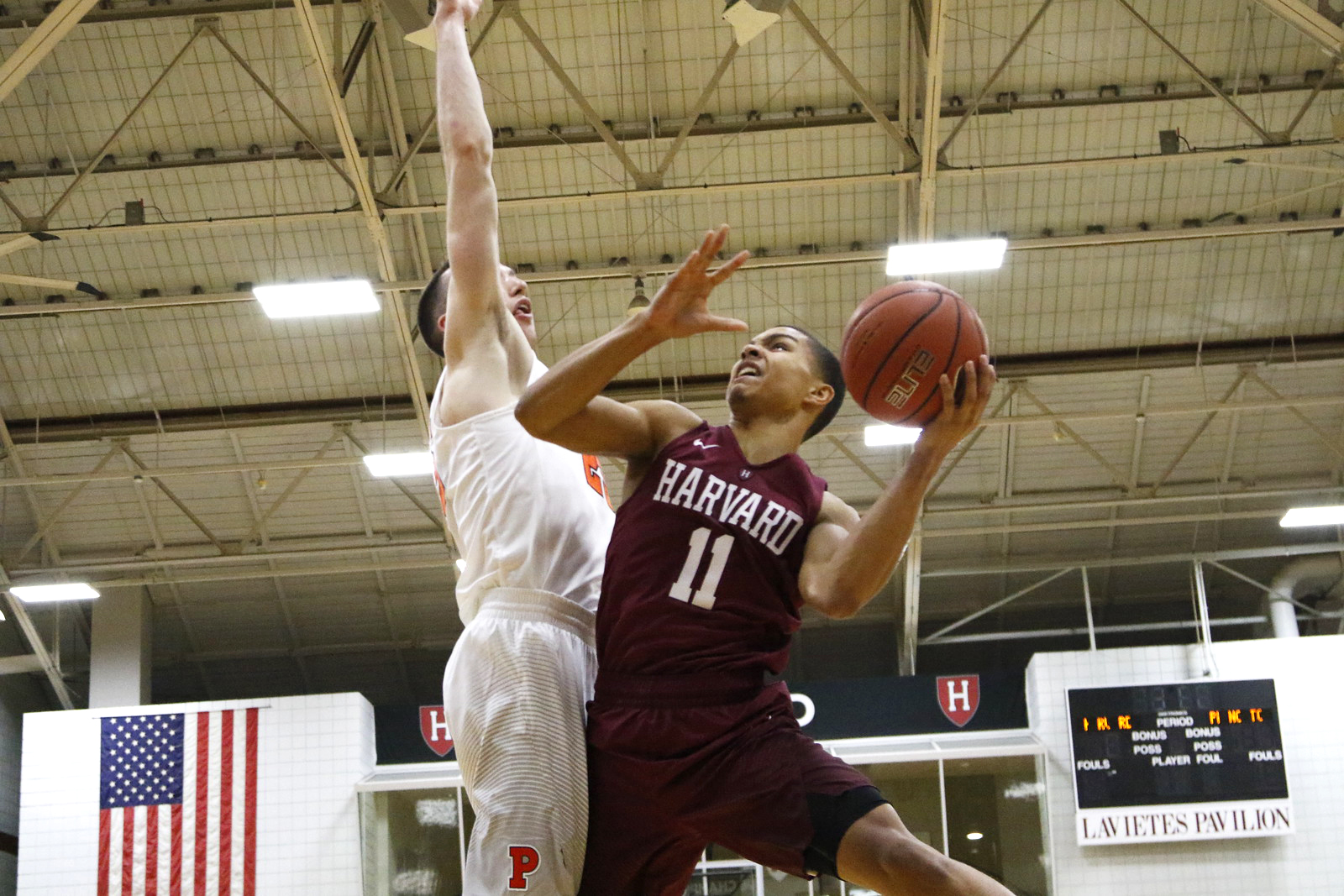 Although he is only a freshman, Bryce Aiken is making big shots for the Harvard men's basketball team this season. By Timothy R. O'Meara
By Theresa C. Hebert, Crimson Staff Writer

Saturday night’s Ivy League matchup between the Harvard men’s basketball team and Yale pitted two potential Ivy League rookies of the year against each other in the Crimson’s Bryce Aiken and the Bulldogs’ Miye Oni. At the end of the night however, only one could come out on top.

No, the Rookie of the Year honor isn’t decided by one night or by head-to-head matchups, but in a rivalry game on the road, Aiken silenced a gym full of Elis both on the court and in the stands, ending Yale’s 22-game home win streak.

Aiken put on a show for the crowd at Payne Whitney Gym, just a show it didn’t want to see. The rookie put up 27 points on 7-of-17 shooting, including 5-of-10 from behind the arc. He also added eight makes from the free throw line, a part of his game that Harvard was sorely lacking during the 2015-2016 season.

“We recruited him to do exactly what he’s doing for our team, have an impact,” Harvard coach Tommy Amaker said. “He’s capable of that and he’s capable of these kinds of nights.”

Saturday night wasn’t the only night Aiken made an impact. The previous night in Providence facing Brown, Aiken also had a career-night, tying his previous season high of 23 points, having previously achieved that feat against Howard in December.

While Aiken may be one of the smallest players on the Crimson’s roster—one of four players listed at six feet—he has no problem driving into a sea of post players and getting the ball over their hand, all while being bumped and often hitting the floor. With the contact he draws in the paint, Aiken has been Harvard’s best player at getting to the free throw line, a skill Amaker has previously noted the team was missing.

The New Jersey native is averaging just under four free throws per game, but this weekend he shot a combined 15 from the stripe. He is shooting at a 91 percent clip on the season, but missed only one all weekend.

Perhaps the most important foul that Aiken drew all weekend, though, didn’t come in the paint on a drive. After Yale went on a 9-1 run, Harvard responded with a 10-2 run, with Aiken scoring six of the 10 points. Four of those points came from one play. Fellow freshman Justin Bassey drove towards the basket with the intention of looking for a layup, but instead saw Aiken in the corner behind the perimeter. Bassey dished the ball to Aiken, who hit the three and was fouled.

“Terrific pass off [Bassey’s] penetration, he kicked it to me in the corner and I let it fly,” Aiken said. “At first, I wasn’t sure if the ball went in or not. I asked my teammates, they helped me up. But terrific pass and blessed enough to make that shot.”

Although Aiken is only a freshman, Harvard has looked to the rookie—a four star recruit in 2016—to take and make the big shots on multiple occasions this year. When he isn’t driving to the hoop through a crowd of defenders, Aiken is often found juking defenders for an open three, working to create his own shot off the dribble.

“Bryce played well this whole weekend, making timely shots, stepping up, being confident,” senior co-captain Siyani Chambers said. “For a guy like him it’s nothing new. For him to come in night after night and do it, that’s what we need. We weren’t really surprised by it because we know that’s how he plays but it was a big shot and we need those shots.”

One of Amaker’s mantras that he shares with his rookies is that by the time that Ivy League play comes around, they don’t have the excuse to say they are freshmen anymore. With more than half the season under his belt, Aiken certainly isn’t playing like someone who was in his first Harvard-Yale matchup on Saturday.

“It was fun. Our team had a tremendous team effort, 1 through 15,” Aiken said. “We were resilient tonight. I think we can out with a fire. We usually, we got some shaky starts but tonight we came out ready to play from the first minute all the way to the last.”