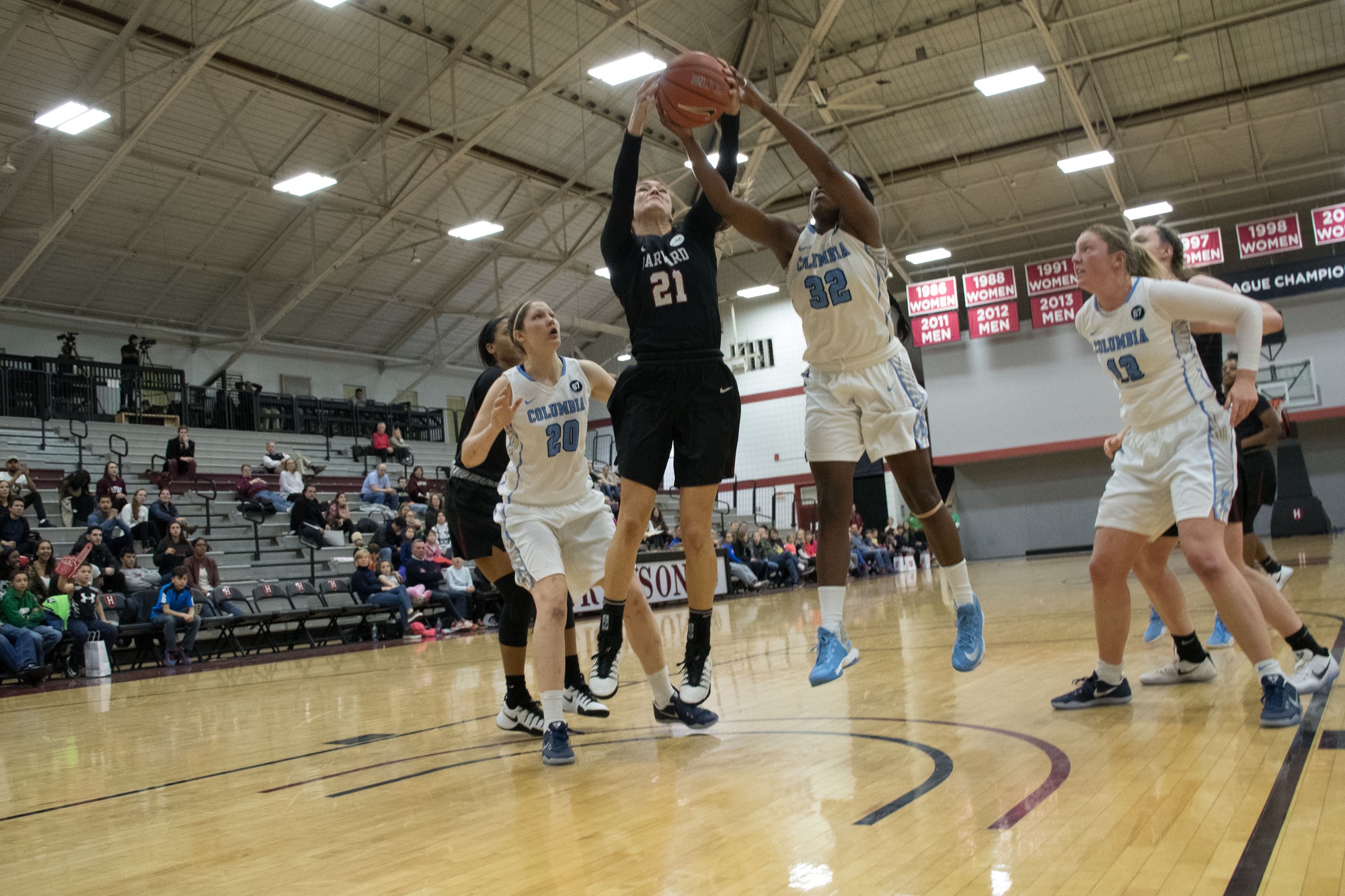 The Harvard women’s basketball team will face a stern test of its title-winning credentials this weekend as it travels to face the ‘Killer P’s’, Penn and Princeton, this weekend.

The Crimson (16-1, 4-0 Ivy), ranked 20th by RPI in the nation, has won 16 consecutive games heading into Friday’s contest at the Palestra where the team will match up with the Quakers (10-6, 3-0 Ivy), the only other undefeated program in Ancient Eight play. 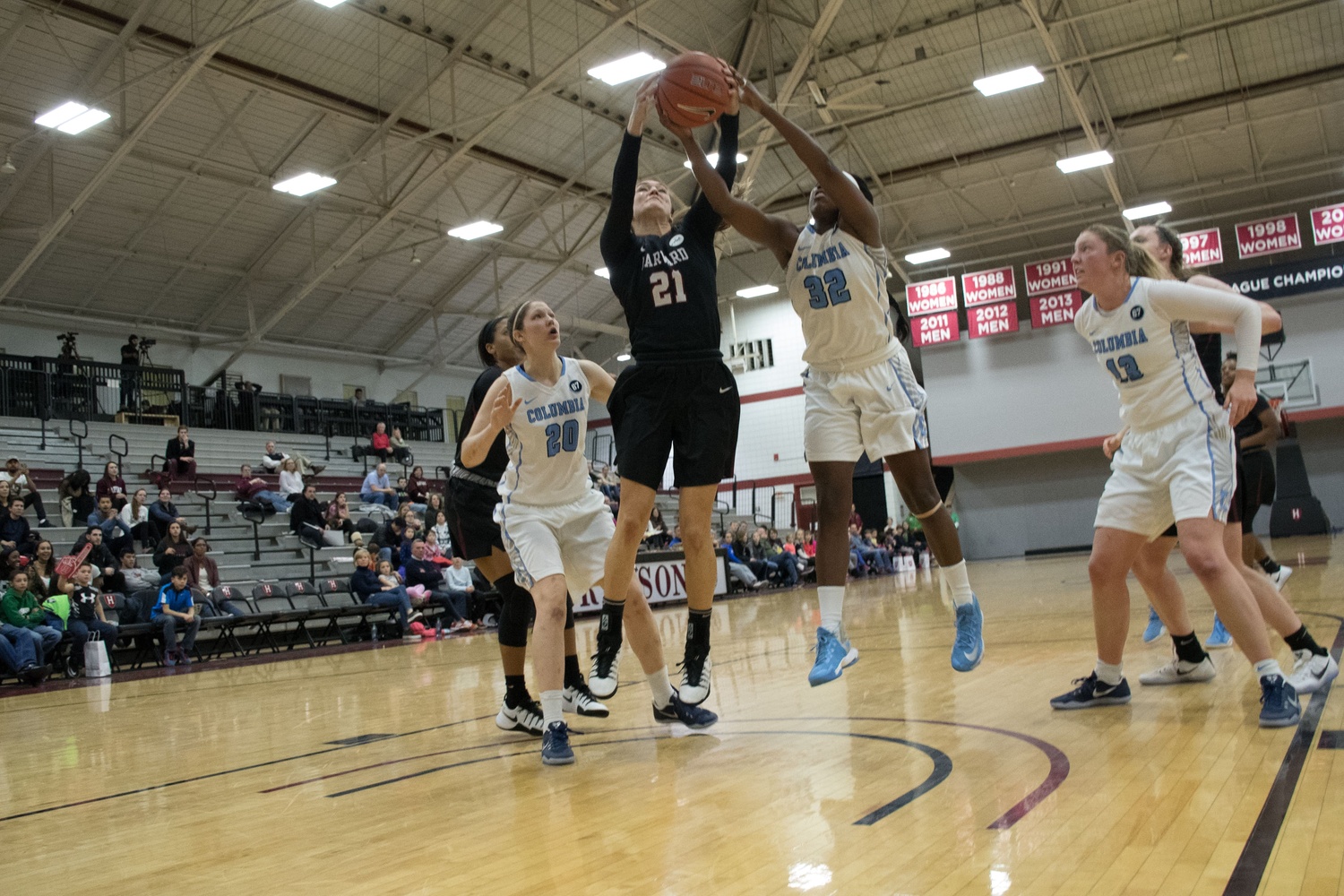 Senior captain Taylor Finley fights Columbia's Tori Oliver for a rebound in the Crimson's narrow win over the Lions. By Megan M. Ross

“We’re really being successful at taking every game at a time and not having any opponent be bigger than another,” Harvard coach Kathy Delaney-Smith said. “That being said, [Penn] did win last year, and they basically have everyone back. I’m sure there’s a little added motivation.”

Penn, which many tipped as the preseason favorite to win the Ivy League, will represent one of the visitors’ stiffest tests to date. Led by their “twin towers,” forwards Sydney Stipanovich and Michelle Nwokedi, the Quakers have allowed just 52.9 points per game, lowest in the conference. The visitors should have extra motivation, however, as a win in Philadelphia would push the winning streak to 17, the longest stretch in program history.

“The past few years, both Penn and Princeton have been the best in our league,” freshman guard Katie Benzan said. “In order to be the best, we have to beat the best.”

It will truly be a standout battle in the frontcourt, with Harvard possessing its own accomplished, albeit more diverse, set of forwards. Standing at 6’3”, freshman center Jeannie Boehm has come into her own this season, showing the skill and toughness that made her a McDonald’s All-American. She makes over half of her field goals, grabs 7.2 rebounds per game, and makes things tough for opposing players in the paint with 2.6 blocks per game.

She is often joined by captain Destiney Nunley, more of a stretch-four who will likely look to draw the Quakers’ forwards out of their defensive shape. Nunley is averaging 11.2 points and 6.9 rebounds per game but has put in crucial buckets when needed, including the game-winner against La Salle and 21 points in the statement win over Temple.

With Penn forcing 14.3 turnovers and blocking 5.9 shots per game, the Crimson will have to find a way to get their perimeter players open looks without being cavalier with the ball. On the flip side, the visitors will have to prevent Penn’s guards from dishing out feeds into the paint. Quakers guard Anna Ross leads the conference in assists, so freshman guard Madeline Raster, arguably Harvard’s best perimeter defender, will have her hands full.

“There’s no secret,” Delaney-Smith said. “They slow you down with a full-court press. They attack in zone and use their height in the back line. If you knock down your shots at Penn, then you can beat them.”

Following Friday’s game is a trip to central New Jersey on Saturday night to face Princeton. Last season, the Tigers became the first Ivy League team in history to enter the NCAA Tournament with an at-large bid. Unlike the Crimson, however, Princeton (7-9, 1-2 Ivy) has struggled to cope with the loss of graduating seniors and started the season on the wrong foot.

The Tigers dropped their first four games of the season before righting the ship. Their difficult non-conference schedule made the going tough, however, with losses against Kansas State and Georgia Tech stopping the team’s progress. Princeton then opened up Ivy League play with back-to-back losses at home against Penn and Brown before recording their first conference win over Yale.

Another stout defensive team, the Tigers rely heavily on 6-foot-4 freshman Bella Alarie, who leads the team with 12.2 points, 7.7 rebounds, 2.5 assists, and 1.6 blocks per game. The battle between her and Harvard’s own freshman forward, Boehm, will be fascinating to watch.

“They play good defense,” Benzan said. “We just have to play our A game. Hopefully we can grind out the win.”

Both teams are careless with the ball, with Princeton averaging 16.3 turnovers per game to the Crimson’s 15.6. The difference is that the Tigers force 16.3 turnovers per game as well while that number is only 10.8 for Delaney-Smith’s team. A key part of this game may be which team is able to break out of its habit and take care of the ball.

There will be opportunities for Harvard’s guards, especially Benzan, Raster, and sophomores Sydney Skinner and Nani Redford, to force mistakes on both ends from Princeton’s backcourt. Efficient guard play has propelled the Crimson to a few big wins this season, and the visitors will need that to continue if they want to extend their march to a regular season conference title.

“We’re downplaying [the winning streak],” Delaney-Smith said. “It honestly is your second season when nonconference is done. That just prepares you for conference…. We fully understand that this is a new season for us.”