Athlete of the Week: June Lee Leads Tennis to 3-0 Weekend 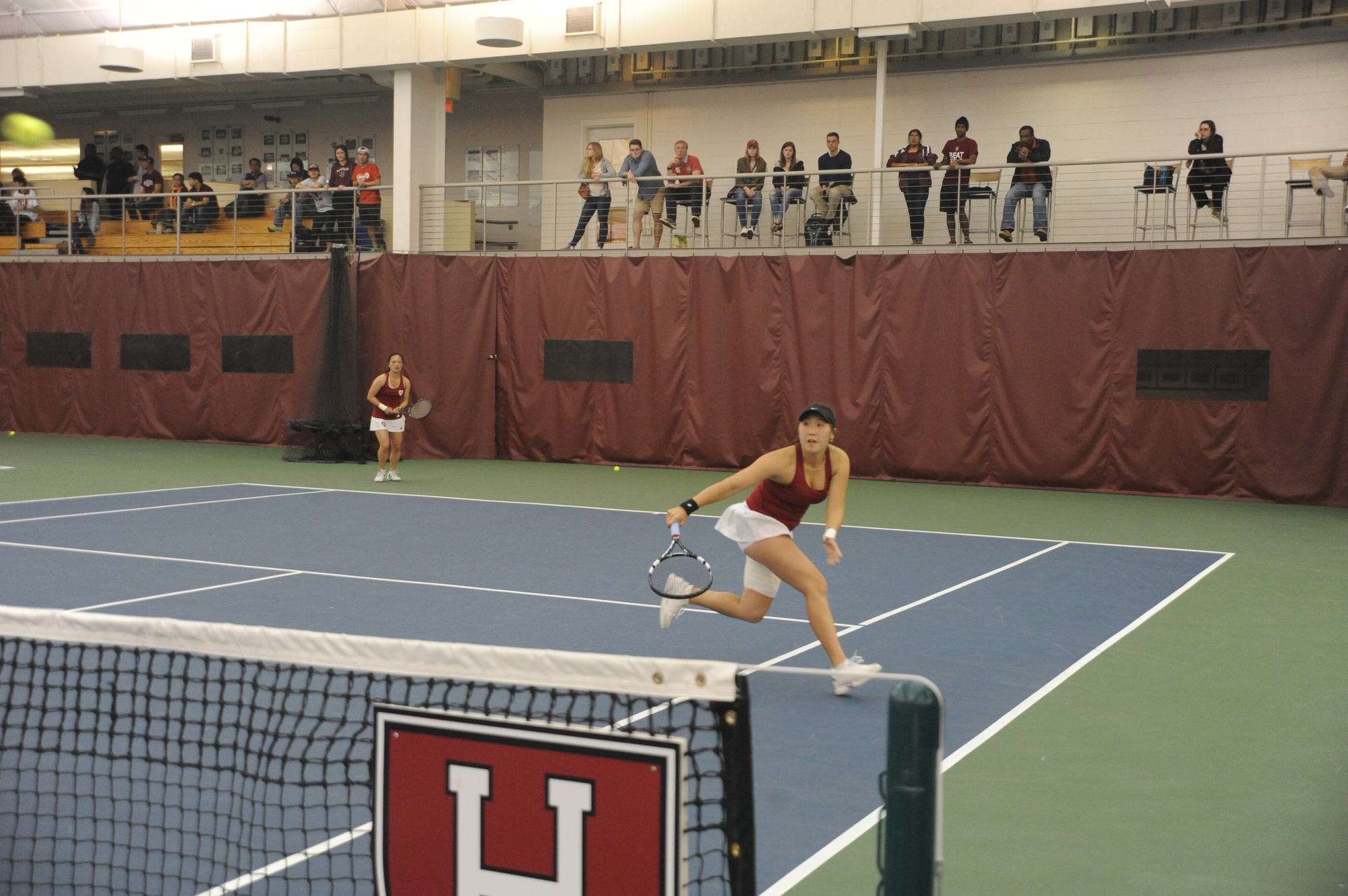 Captain June Lee leads the tennis team to an undefeated weekend against Rhode Island, Georgetown, and Boston College in the team’s first home match up of the season.
By Stephen J. Gleason, Crimson Staff Writer

There’s no place like home for the Harvard women’s tennis team. Playing its first matches of 2017 at the Murr Center, the squad picked up its first three victories of the season, stymieing Boston College, Georgetown, and Rhode Island over the weekend. Captain June Lee, junior Annika Ringblom, and freshman Irene Lu all won three singles matches over the two days. For her performance, Lee is The Crimson’s Athlete of the Week.

“We’re really proud of June and the way she’s been competing for us,” Harvard coach Traci Green said. “She’s really grown tremendously as a student and a leader on our team. Her fitness is impeccable, she’s been working a lot on that and her leadership was amazing this weekend. Without her leadership, we wouldn’t be in the same place. The biggest part of her game is her energy.”

Lee, the only senior on a team that features seven freshmen and just one other upperclassman, won all of her singles matches in straight sets, starting the Crimson (3-4) off on the right foot on Sunday against Rhode Island and clinching Saturday’s win over BC.

Harvard captured the doubles point in dominating fashion and never looked back, making quick work of the Rams (4-4) on Sunday afternoon. The freshman duo of Natasha Gonzalez and Irene Lu conceded just one game to their visitors from Kingston. Lee and sophomore Sabrina Xiong one-upped their first-year teammates, winning all six games against Rhode Island.

“It’s pretty tough to play three matches in one weekend, especially two matches in one day early on in the season to really test your fitness and focus,” Green said. “We definitely got a lot tougher from the overall experience and we’re looking to carry that momentum from those wins.”

With the doubles point in hand, Lee, Lu, and freshman Angelina Ye all secured two-set victories to end the match with the minimum number of completed games. Lee made the most of her first appearance of the weekend at the top singles spot, winning all 12 games against freshman and Norristown, Pa. native Mihaela Codreanu.

The Crimson’s closest match of the weekend came on Sunday morning. Harvard found itself down early after the Hoyas (1-1) secured the doubles point to begin the match. Sophomore Erica Oosterhout and Lee fell to Georgetown’s Victoria Saperstein and Risa Nakagawa to give Lee her only loss of the weekend in six matches. However, the senior proved to be the catalyst for the Crimson when the match switched to singles action.

“Individually, I thought it was a pretty solid weekend,” Lee said. “There’s still definitely more work to do in doubles, individually and as a team.”

Lee beat Nakagawa in the No. 2 position and teammates Ringblom, Lu, and Oosterhout all posted similar results to give Harvard a come-from-behind victory.

“When you’re playing your singles match, you want to make sure you’re being positive and pumping up your teammates, keeping your composure,” Lee said. “When your teammates playing next to you are looking around, they tend to see what your attitude and morale is and feed off that.”

The Crimson began the weekend against an Eagles team that has given it fits over the past few seasons. After losing the doubles point, it looked as though history was about to repeat itself in Cambridge.

However, Harvard’s fourth, fifth, and sixth players made sure to not let that happen. The trio of Ringblom, Lu, and Gonzalez all picked up straight set victories in their respective matches to give Harvard some much-needed momentum.

Oosterhout and Lee picked up signature wins from the top two positions to seal the win for the Crimson. Oosterhout upset Asiya Dair, the No. 104 player in the nation, in a thrilling 6-4, 2-6, 12-10 affair while Lee was victorious over Lexi Borr in straight sets.

“This weekend was a great opportunity for our team to play some tough opponents and really test our mental strength and also our fitness,” Green said. “I’m really proud of the way our gang came together under different circumstances for different matches and pulled out the win.”

—Staff writer Stephen J. Gleason can be reached at stephen.gleason@thecrimson.com