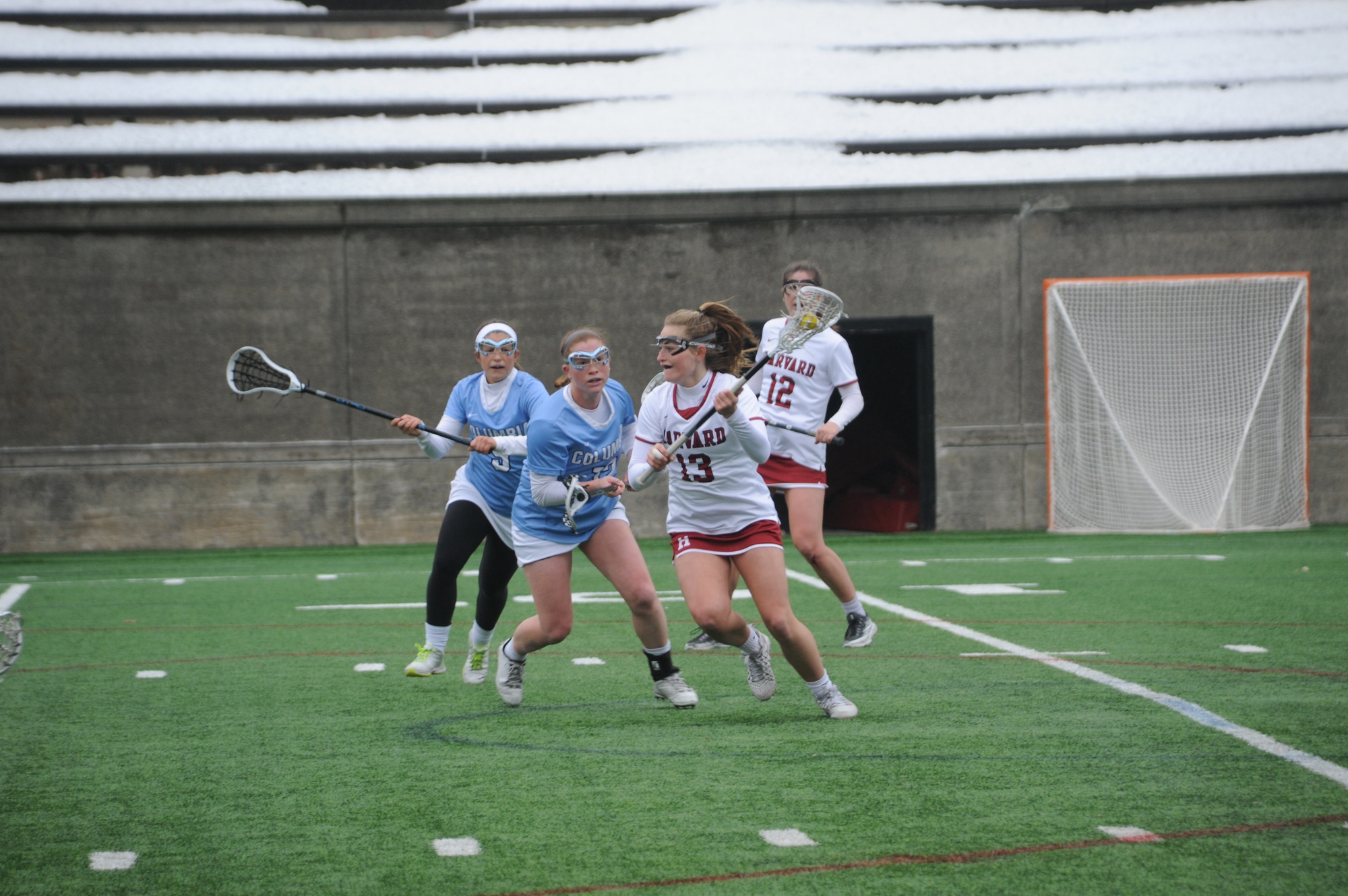 ­This Saturday, the Harvard Women’s Lacrosse team will travel to Hanover, N.H. to take on Ivy League foe Dartmouth. The Crimson’s third conference game of the season comes just four days after a narrow 10-9 loss to Stanford, in which the Crimson blew an 8-4 lead in the last 20 minutes of the contest.

“After the close loss to Stanford on Tuesday we’re excited to get back on the field practicing before Saturday’s game against Dartmouth,” tri-captain Megan Hennessey said. “We want to focus on beating a sagging zone defense and cleaning up the 50/50 plays, such as draw controls and ground balls.”

This will be a tall task, as Dartmouth (5-3, 0-2 Ivy League) boasts sophomore midfielder Katherine Giroux, whose 52 draw controls lead the Ancient Eight. Behind the sophomore’s efforts, the Big Green is third in the country for draw controls per game.

However, Giroux will face a tough opponent in Crimson tri-captain Maeve McMahon, who herself has 44 draw controls, coming in third in the Ancient Eight. It looks not only to be an entertaining match-up, but also an important one, as draw controls are critical in setting the tone of the game and establishing possession.

“We are preparing for [Dartmouth] to have a lot of energy and aggression because it’s a big Ivy League game and Ivy League teams always come out full of energy,” senior attacker Marisa Romeo said. “A lot is at stake.”

While the Crimson (5-4, 2-0 Ivy League) is looking to bounce back from its loss against Stanford, the Big Green will hope to replicate the success achieved in its last game against Siena, which ended in a lopsided 16-6 victory. Crucial to the win was senior attacker Courtney Weisse, whose five goals in the game brought her season total to a team-leading 27. The senior is currently ranked 28th in the country for goals per game.

Paired with sophomore midfielder Elizabeth Mastrio and junior attacker Cara DiPeppo, who each have 17 goals on the season, Wiesse represents a dangerous offensive threat for Dartmouth.

Defensively, the Big Green is anchored by freshman goalkeeper Kiera Vrindten. Despite her rookie status, Vrindten has started seven of the season’s eight contests, although she did not play against Siena. The first-year’s average of 11 saves per game is the seventh-highest in the nation.

The New Jersey native also ranks in the top five in the Ivy League in saves, save percentage, and goals against, holding opponents to an average of 11.8 goals per game in conference play. But in spite of Vrindten’s best efforts, Dartmouth has begun the season 0-2 in the Ancient Eight, with a seven-point loss to Columbia followed by an 18-8 loss to Princeton.

Harvard, on the other hand, will look to extend its unbeaten streak in Ivy League play after 14-13 and 10-8 victories over Yale and Columbia, respectively.

“Dartmouth is typically a very scrappy team,” Hennessey said. “We want to be prepared to handle the high pressure they may throw at us, while also executing our game plan.”

In order to keep its undefeated Ancient Eight run alive, the Crimson will look to senior attacker Marisa Romeo, the team’s leading scorer, whose 30 goals put her at third place in the Ancient Eight.

This season alone, the Syracuse, N.Y. native has racked up seven hat tricks in nine games, in addition to garnering two Ivy League Offensive Player of the Week awards. The senior also made it onto the Tewaaraton Award watch list and ranks 13th in the country for goals per game.

McMahon, junior Julia Glynn and sophomore Keeley MacAfee have also been offensive weapons for Harvard this season. McMahon has contributed four assists and 17 goals so far, including two behind-the-back finishes in the last week. MacAfee is second on the team for goals with 22, while Glynn has chipped in 15 points this year on 12 scores and 3 assists. The trio will look to continue their strong attacking play this Saturday against Dartmouth.

Another player to watch for the Crimson is freshman defender Tate Green, whose strong defensive work has earned her playing time in all nine games this season.

The last time Harvard faced the Big Green was almost exactly a year ago, when the Crimson came away with a dominant 17-9 victory at Harvard Stadium. If their previous Ivy League matchups—which Harvard won by narrow one and two-point margins—are any indication, Saturday’s game may prove closer than the last.

“Ivy League games always bring out the best in you and your opponent, so it is always a battle,” Hennessey said. “We want to keep working hard in practice and beat all of our league opponents one game at a time.”

—Contributing writer Leena Ambady can be reached at lambady@college.harvard.edu.