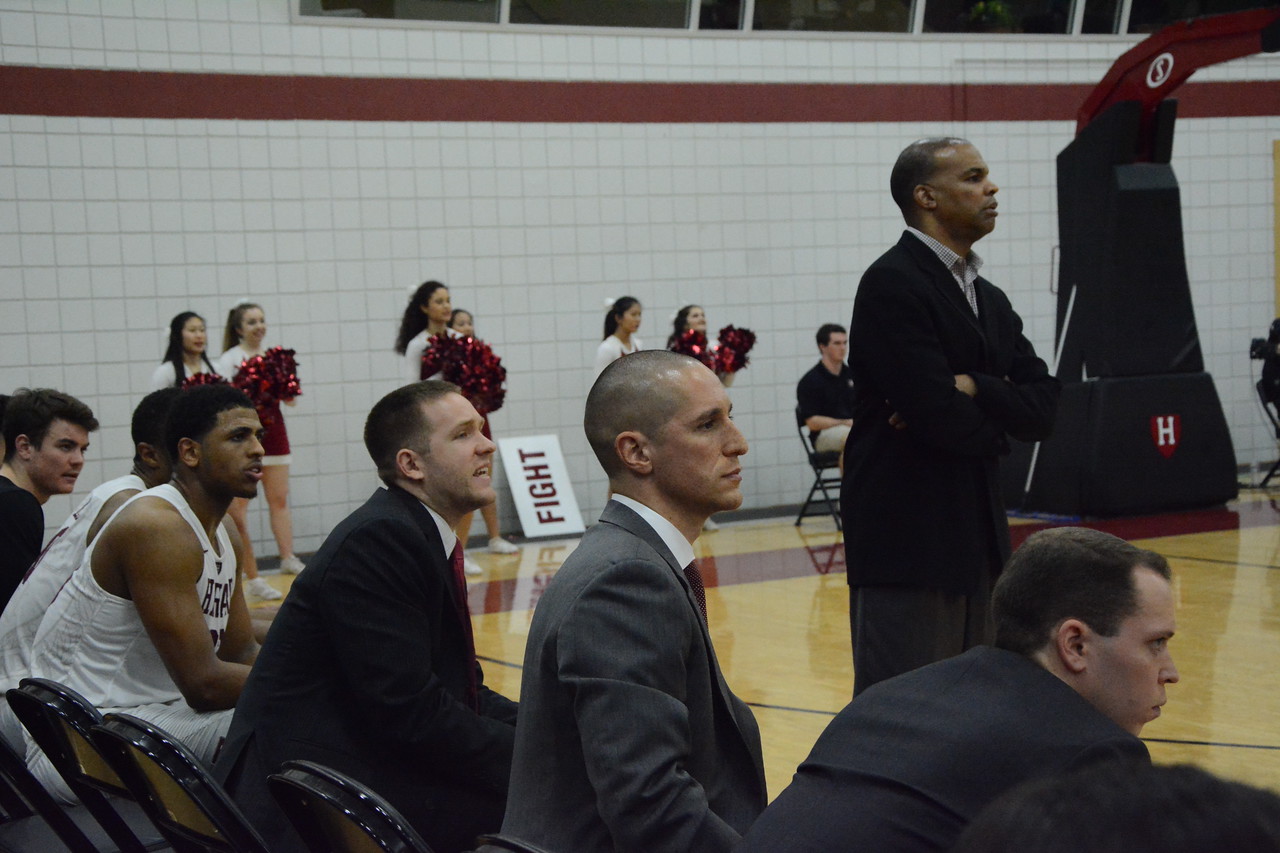 Fields, courts, mats, pools, tracks, rivers, and courses—Harvard student-athletes compete on all kinds of environments. And in each location, a predictable cast of characters helps the Crimson to success.

Head coaches guide, assistant coaches supplement, strength trainers toughen, and sports medicine professionals heal. Then, of course, there are the athletes themselves through which performances culminate.

This list is not complete, however. The efforts of one particular group of individuals affiliated with Harvard athletics goes largely unnoticed.

For the Crimson’s baseball, basketball, cross country, squash, women’s tennis, track and field, and water polo teams, student managers are an integral cog in the machine. By streamlining practices and helping with sideline management during games, these student managers simplify the lives of coaches and athletes—and make success that much easier.

Attention to detail is key when aiding in the everyday process. Student managers thrive in working on the small, sometimes overlooked aspects of a team. For the managers, it’s all just part of the job. Just ask senior Peyton Fine, a student manager for men’s basketball.

“I think it starts with just having everything ready for practice and that’s sort of the day-in, day-out of the role,” senior Peyton Fine said. “A lot of the time before practice the guys will do a lift, so we’ll be there towards the end of their lift just making sure waters are out, that the court is clean, that different extra equipment that we use during the practice is set up…. Within the games, it’s our job to make sure the bench is set up, making sure during timeouts that we…bring out the stools onto the court.”

Fine and the rest of the men’s basketball student management cohort tirelessly work to ensure the needs of the coaching staff and players are met such that the squad can perform to the best of its abilities without having to worry as much about the little things.

Managers on other teams provide similar assistance, but no manager is confined merely to aiding in equipment and electrolyte transfer.

For sophomore Rana Bansal, the No. 2 men’s squash manager, a typical practice day could involve anything from filming sessions to refereeing intra-squad matches, or even playing on-court with some members of the team. On match day, his responsibilities tend to revolve around score reporting and lending support to the team.

Fine has a more expansive role within the men’s basketball team, as well, as he handles much of the deeper analytics reporting that coaches rely on to color their decision-making processes.

“During the game, we’re tracking all the substitutions that come in and out of the game so we can do line-up efficiencies and line-up plus-minuses,” Fine said. “That’s a stat that in a lot of bigger conferences the media will take care of. If you have like the ACC, the Big Ten, or Big 12, there’s such a media presence at those games, that [they] can usually track those stats.... The one thing we don’t have [in the Ivy League] is [a lot of media coverage], so that’s something we have to do internally.”

Without much media coverage of Ancient Eight matchups, student managers are there to pick up the slack where it’s needed. Statistical tracking, statistical analysis, and score reporting can just another part of their role.

The ways in which such a role manifests itself can constantly change. Clearly, the duties of a singular student manager depend on the requirements of his or her individual team. Methodologies and personalities vary from team to team and sport to sport, resulting in different experiences across the board.

“I think being team manager entirely depends on the team you are working with, because each team has different needs and requirements for its players,” Bansal said. “I have been able to get close with the guys on the team and feel very strongly about making sure that we are successful not only in matches but the way the squad feels and approaches each match.”

Student managers become part of the fabric of their respective teams, and are treated as such. As their experience builds and familiarity grows, the certainty of this statement deepens even further.

Even so, the managers must live in multiple worlds. As an extension of the coaching staff, they have administrative responsibilities. But as Harvard students, they seem more liable to develop natural bonds with athletes. In reality, according to Fine, they foster solid connections with both parties, albeit connections of a dissimilar nature.

“Age-wise and experience-wise you’re going through the same things [as] the players. However, the person that we’re taking our direction from is a member of the coaching staff­—you do live in both worlds,” Fine said. “In terms of integration, we travel with the team just like a player would, we are at every practice just like a player would be, and just like a coach would be… There’s no way you can’t be [integrated] when you spend that kind of time, and so you do end up with both sides.”

Building these bonds allows student managers to access the wealth of experience and fellowship that the Crimson’s coaches and student-athletes have to provide.

“Being team manager means that you get to work closely with the coaching staff, which has been great especially for squash because the coaches are among the best in the world,” Bansal said. “At Harvard the coaching resources are almost unparalleled in the time and effort they dedicate into making sure you are successful as a student both in the athletic facilities and outside in the classroom and your personal life.”

In terms of commitment, the role can be taxing, as managers must spend a similar magnitude of time involved in sport as their student-athlete counterparts.

However, coaching staffs often offer some flexibility, recognizing that time can be scarce commodity for Harvard students.

“There’s a level of commitment that’s expected, but our coaches are really good about working with us,” Fine said. “As Harvard students, this is one of many things we have going on, and our coaching staff is really good about meeting us where we’re at.”

The Harvard Athletics Department isn’t the only entity that benefits from the relationship. For the managers, the experience can be rewarding, as well. They not only get to be involved in a sport that they love but also get some satisfaction from knowing that they are a part of the formula of their team’s success.

The position is also a platform to build upon one’s understanding of how a sport should be played. After observing firsthand how the coaches and players respond to different situations during practices and games, managers absorb pockets of useful information. Knowledge accrues, and working relationships build.

“I learned a ton about the game of basketball just by doing this,” Fine said. “I expected to gain basketball knowledge and [knowledge of] what a professional life in basketball could look like. I got that, but I also got so much more…. The relationships that I got out of it were way more than I expected.”

For those passionate about an individual sport, taking on a student manager position has seemed to have been gratifying route to stay involved through a role with the Crimson varsity squad. But according to Bansal, in terms of the experience, you get out of it what you put in.

“I would encourage others to pursue a role as team manager if they are really passionate about the sport and the team,” Bansal said. “The role is definitely worthwhile if you love the game you are spending time following, and tracking and the success of the experience depends on what you make of it.”