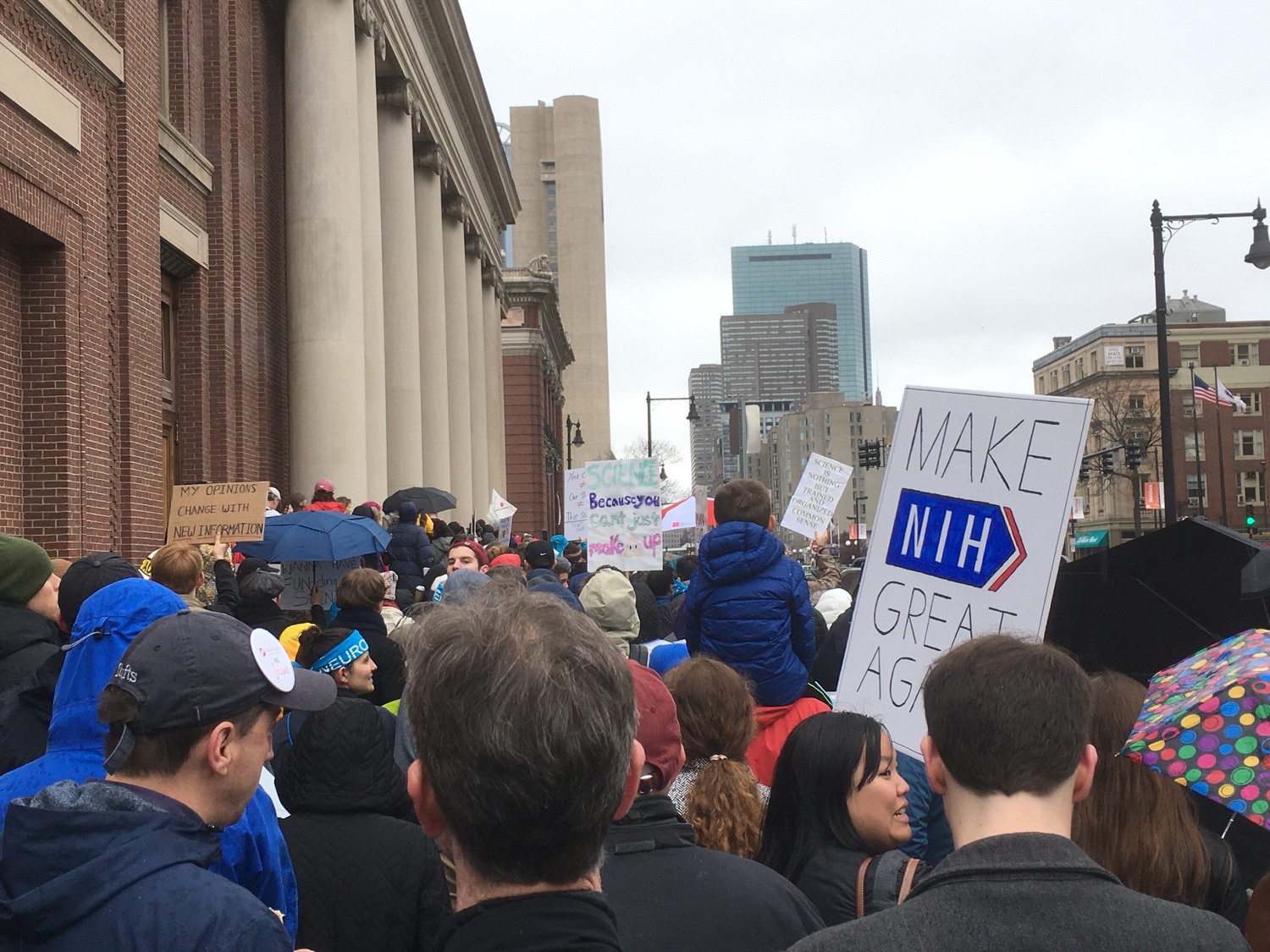 The demonstrations, which took place both on Harvard’s campus in Cambridge and in front of the Medical School in Longwood, occurred on the same day as the nationwide March for Science, a nonpartisan movement seeking to “champion robustly funded and publicly communicated science as a pillar of human freedom.”

University President Drew G. Faust gave opening remarks at the Cambridge rally, emphasizing the importance of science as a “foundation for our health, our prosperity, our possibilities.”

“We march today for a future in which the federal government supports the research and teaching essential to national and human progress,” Faust said. “We march because our future depends on the future of science.”

President Donald Trump’s proposals to significantly cut federal funding for scientific research has worried Harvard professors and administrators. In March, a University spokesperson harshly criticized the White House’s proposed budget—which could cut large portions of the Environmental Protection Agency and National Institute of Health’s budgets. Other Harvard affiliates have said they are concerned about Trump’s stance on climate change.

Hundreds, many with homemade signs and young children in tow, joined Daley at the Longwood rally, where Medical School students, patients, researchers and Dean of Students Fidencio Saldana all delivered speeches.

In his speech, Daley criticized the White House’s recently-proposed cuts to scientific research, citing examples of how federally funded research has helped save lives lost to heart disease, cancer, and HIV.

“Make no mistake. Like a slow-growing but ultimately malignant cancer, the metastasizing doubt of science will lead to harmful decisions and reckless policies,” he said.

Daley extolled the impact of scientific research and said that nearly half of new cancer drugs approved by the Food and Drug Administration in the last five years came from research funded by National Institutes of Health.

Amy Coughlin, the mother of an 11-year old daughter who was diagnosed with early-childhood neuroblastoma, described how new stem-cell treatments kept her daughter alive.

“That's research. It's messy and scary and completely necessary to save the people that we love,” said Coughlin. “Research is putting absolute trust and faith in doctors and scientists to cure your daughter.”

The Boston March for Science featured songs, speeches, and a children’s event. Church, recognized for his contributions to CRISPR gene editing, was among the first to speak.

Church urged to crowd to celebrate science funding and literacy regardless of affiliation.

“Today we show gratitude and concern for science funding and immigrant scientists from all around the world,” Church said. “Science is not optional, and we have big decisions to make and we need everyone engaged in this conversation, not just the elite.”

Welcome Bender, a medical school professor, held up a sign in the Longwood rally that read “Reality has a Truthiness All Its Own” on one side and “Reality is Not On TV” on the other. He said that he participated in the Longwood March simply “for science.”

“I think what’s really disturbing is that a large fraction of our country doesn’t think about evidence and science,” Bender said. “[This] always results in statements that cannot possibly be true.”