No. 11 Cornell Clamps Down on Women's Lacrosse 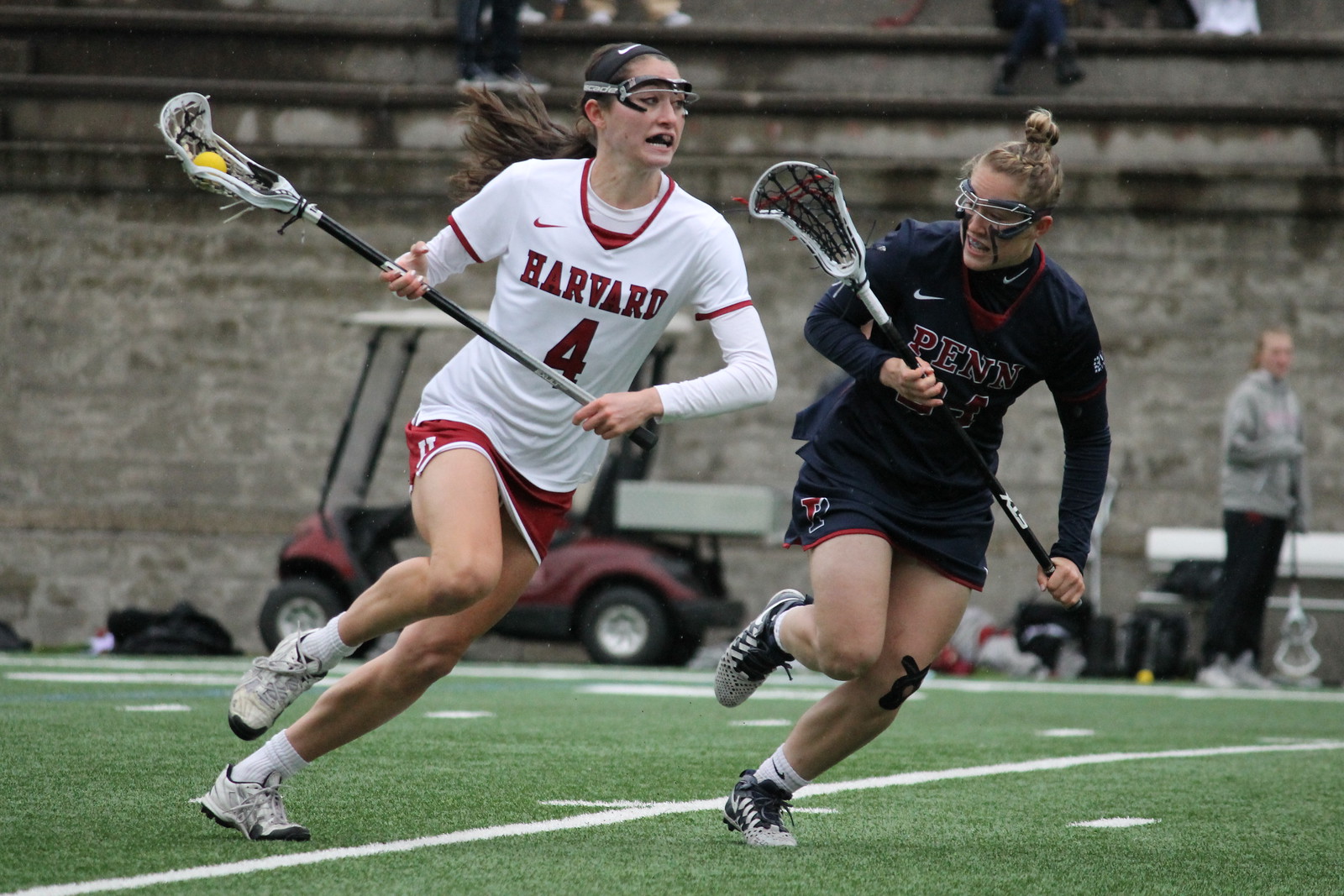 Tri-captain Emma Ford, pictured here driving to the net earlier in April against Penn. After this weekend's matchup with No. 11 Cornell, the Skaneateles, N.Y., native has 23 ground balls and 15 forced turnovers while manning the back line for the Crimson this season. By Kathryn S. Kuhar
By Sam O.M. Christenfeld, Crimson Staff Writer

This weekend, the Harvard women’s lacrosse team qualified for the Ivy League Tournament for the fourth time in as many years.

However, the Crimson did not find its way back into the conference tournament the way it would have liked. After opening its Ancient Eight campaign with three consecutive wins, Harvard picked up only a single victory in its final four league contests.

The Crimson’s most recent Ivy League loss came in Ithaca, N.Y., on Saturday, as the team took on No. 11 Cornell, its second straight nationally-ranked conference opponent. In a battle between Harvard’s top-25 offensive unit and the Big Red’s defense, which is ranked eighth in the nation, Cornell’s back line came out on top. The Crimson (8-7, 4-3 Ivy League) was held to its second-lowest single-game goals total of the season, while the Big Red (11-4, 6-1 Ivy) was able to cruise to a 13-6 win.

Despite the result, Harvard ended the campaign in fourth place in the Ancient Eight. The top-half finish means that the Crimson’s season will continue with a conference tournament semifinal next week.

““We played below our potential,” senior attacker Marisa Romeo said. “Luckily we have the tournament next week to play hard.”

Look for the team to focus on avoiding foul trouble in its upcoming tournament game. Harvard has committed 178 infractions to its opponents’ 136 over its last five games and leads the Ivy League in fouls per game. On Saturday, the Crimson registered 13 more fouls than Cornell, racking up 41 over the course of the matchup.

Four of Cornell’s penalty scores came in the first half, helping the Big Red to a five-point advantage by halftime.

Cornell jumped out to its lead quickly. The Big Red drew first blood, finding the back of the net less than two minutes into the game. Although junior midfielder Julia Glynn pulled the Crimson level with her 16th finish of the season a minute later, Cornell notched five unanswered goals, amassing a 6-1 lead by the 20 minute mark in the first period.

Harvard got two points back through a free position conversion from Romeo and a close-range finish from freshman midfielder Katie Muldoon, but the Big Red answered each Crimson score with one of its own to finish the first stanza ahead, 8-3.

The game marked one of just three times this season that Romeo, who is ranked 11th in the country for points per game, has been held to a single point. The senior fired off five shots on goal, but an outstanding performance from Cornell senior goalie Renee Poullott all but shut Romeo down.

The Big Red also topped the Crimson in turnovers, ground balls, and clear percentage in a stifling defensive showing.

Cornell’s offense also shone on the day, led by standout performances from co-captains Catherine Ellis and Kristy Gilbert. Ellis racked up five goals and an assist, while Gilbert accrued four scores and a helper. All of Gilbert’s finishes came from free position opportunities, as did one from Ellis.

Harvard could find no answer to the Big Red’s potent attacking duo. Glynn and Muldoon would each net another goal in the second half, but the team’s top two scorers, Romeo and sophomore midfielder Keeley MacAfee, were each limited to a goal apiece.

Glynn, MacAfee, and Muldoon did all of the Crimson’s scoring in the second half with a finish each, but Harvard could not break through Cornell’s defense until nearly halfway through the closing stanza.

Glynn picked up the Crimson’s first goal after the restart 14 minutes into the second period, when tri-captain attacker Maeve McMahon passed the ball away on a free position chance. Glynn fooled a Big Red defender with a shot fake before picking out the far side of the net to complete her brace.

By that point, though, Cornell had already scored three times, including a pair of free position conversions in three minutes from Gilbert.

With the result already out of reach, the teams would trade goals for the rest of the contest. First, MacAfee outpaced a defender with a roll dodge and netted her 35th finish of the season with five minutes remaining after a Big Red score.

Ellis picked up her fifth and final goal less than a minute after MacAfee, and Muldoon closed out the game with a score with just over 60 seconds left to play. Sophomore midfielder Caroline Garrity had her shot turned away, but Poullott couldn’t hold on to the ball, and Muldoon picked up the rebound and tucked it away from close range to settle the margin at 13-6.

Harvard will get a shot at redemption when it faces Cornell in the Ivy League Tournament semifinal.

“We played a talented team and we can't wait to play them again on Friday,” McMahon said.