Whether Harvard can successfully transform this quiet corner into the “engaging public realm” it envisions may provide a blueprint for the University’s future across the Charles.
By Sarah Wu 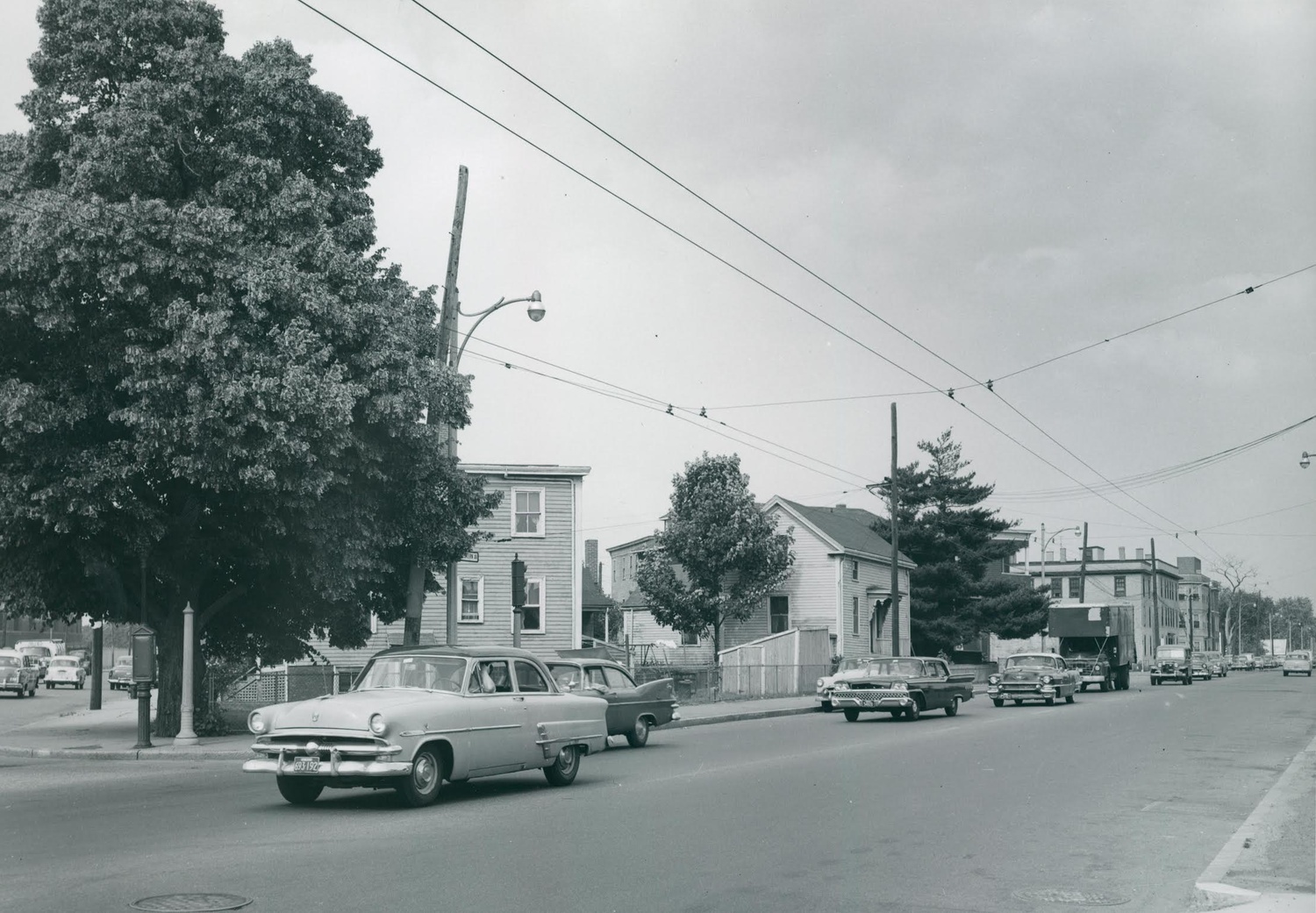 Barry's Corner, at the intersection of Western Ave and North Harvard St, circa 1960s. By Courtesy of Charlie Vasiliades

Barry’s Corner—the 9.3-acre slice of Allston at the intersection of North Harvard Street and Western Avenue—doesn’t quite look like the future of Harvard University.

The streets are mostly void of pedestrians. There’s a bakery, a pizza place, and a sleek new apartment complex still seeking its last retail tenant for its ground floor. The compact neighborhood is unassuming, for now mostly a thoroughfare between Harvard—a mile to the north across the Charles River—and the more bustling areas of Allston to the south.

But as Harvard pursues what University President Drew G. Faust has called “a future in which all roads lead to Allston,” it has big plans for Barry’s Corner. Revitalizing the once-vibrant neighborhood is a cornerstone of the University’s ambitious Institutional Master Plan for Allston.

And Harvard has history working against it. Many longtime residents are skeptical of redevelopment plans—the last of which, in the 1960s, razed every home in the neighborhood—and Harvard’s secret land acquisitions in the 1990s did little to foster town-gown relations.

Whether Harvard can successfully transform the quiet corner into the “engaging public realm” it envisions may provide a blueprint for the University’s future across the Charles.

'To Hell with Urban Renewal'

Long before Harvard set its sights on Barry’s Corner, the Boston Redevelopment Authority—a local government agency responsible for municipal planning—had another plan for the neighborhood. In 1961, according to the Brighton-Allston Historical Society, the BRA put forward a plan to demolish all 52 buildings in Barry’s Corner to make way for future development.

Residents received letters notifying them that their houses had been taken by eminent domain. Over the next few years, McCall and others recalled, residents mobilized and protested the redevelopment for years.

Despite intense backlash, the BRA moved forward with the redevelopment plan. As police and moving trucks came in to evict the remaining families, hundreds of demonstrators stood in their way. Nonetheless, the last homes were razed in 1969. 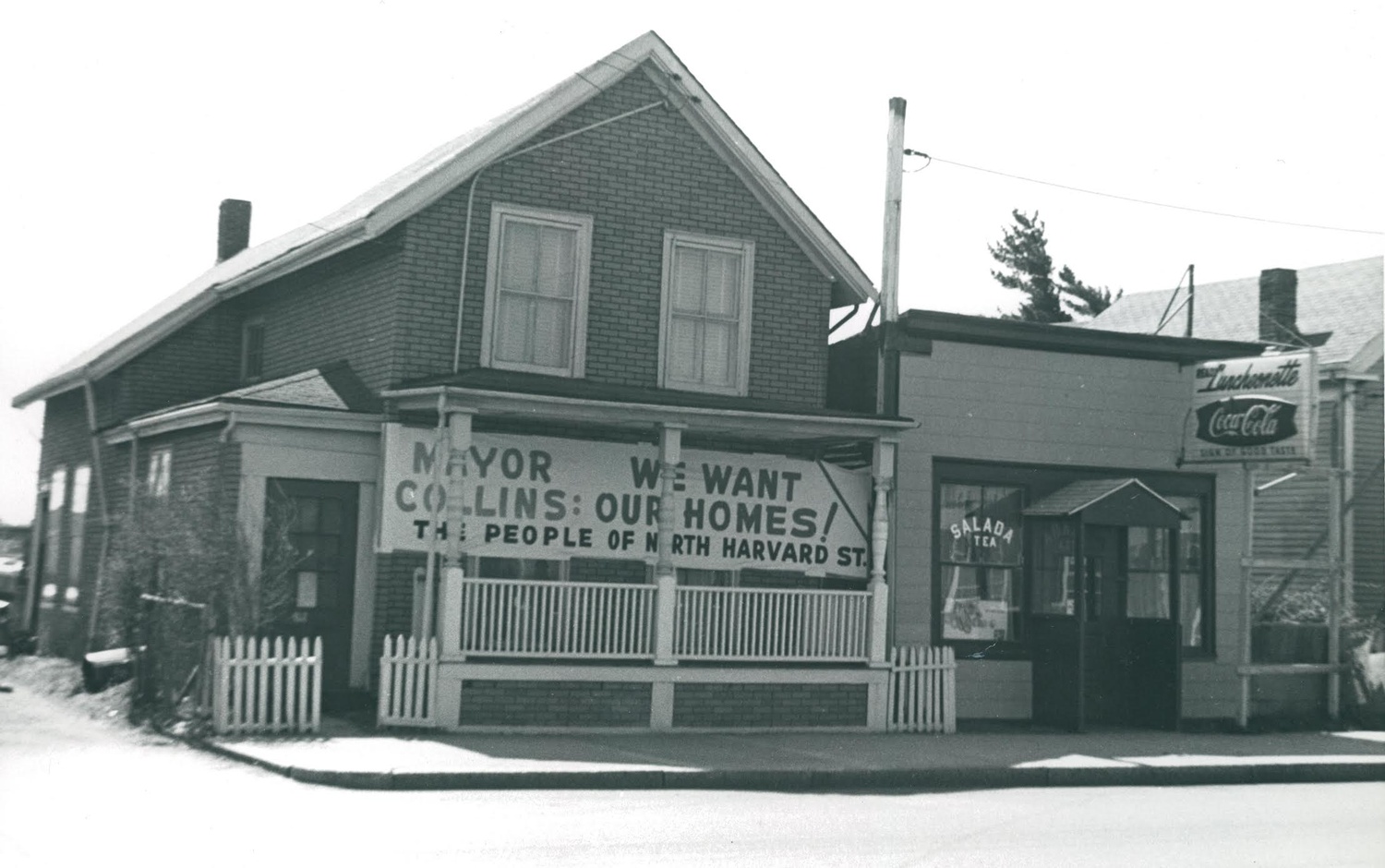 Irene S. McCall, a 92-year-old lifetime resident of Barry’s Corner, said her family was displaced by the BRA.

“We had a beautiful childhood there,” McCall said. “They called it a blighted area and it wasn’t blighted. It was a beautiful area.”

Kairos Shen, a BRA staffer since the 1990s and Chief Planner of Boston until 2015, said the BRA he knew was a “very different agency” than it had been in the years after it formed in 1957.

“I know that it is hard for many community members to think of the agency in this way, but during the time I worked for the agency, the BRA was very sensitive and inclusive of the community’s concerns,” he said.

Still, according to Tony D’Isidoro, a board member of the Allston Civic Association, this chapter of Barry’s Corner’s history has made many Allstonians “suspect” of new development ever since. When Harvard entered the picture as the key developer of Allston, residents say they were wary that the relationship would also be a one-way street.

When Harvard chose Allston—though home to the Harvard Stadium since 1903 and the Business School since 1927—as its new frontier, it got off to a rocky start. While the University now has several projects in motion, including a $1 billion science complex, a hotel and conference center, and a new basketball venue, the initial revelations of its land purchases in Allston unsettled residents.

In 1997, Harvard announced that it had secretly obtained 52 acres of land in Allston through a real estate firm. Though Harvard officials defended their land acquisition as economically “prudent,” the University paid a price in its public relations.

Former Boston Mayor Thomas M. Menino wrote a letter to then-University President Neil M. Rudenstine arguing that the move reflected “'the highest level of arrogance seen in our city in many years.”

The anonymity of the acquisitions also fostered tensions between Harvard and Allstonians, many of whom initially distrusted Harvard’s plans for their neighborhood.

Four years later, the day after Lawrence H. Summers was announced as Harvard’s next University President in 2001, Summers said, he called Menino in hopes of strengthening Harvard-Boston relations.

“When I got there, there were still very substantial scars from the secret purchasing,” Summers said.

Over Summers’s tenure, the University sought to rebuild trust through by sending representatives to Allston meetings and supporting neighborhood projects, he said. Summers said what residents call a lack of communication was often a result of complicated internal processes.

“So often what others regarded as non-transparency was really just Harvard not knowing the answers to the questions. We couldn’t tell them what we didn’t know,” Summers said.

Town-gown relations seemed to be on an upswing, Summers said. But in 2009, after the value of Harvard’s endowment dropped by nearly 30 percent, Faust announced she would halt Allston expansion plans.

The announcement was met with frustration and disappointment from residents, many of whom said they were wary of Harvard’s commitment to their neighborhood.

Harvard spokesperson Kevin Casey said Faust aimed to set a tone of “making a commitment that is deliverable and meeting milestones to build a level of trust with our community stakeholders” given the global financial collapse. Faust also commissioned the Allston Work Team, a 14-member committee tasked with making recommendations for Harvard’s future in Allston in the aftermath of the recession.

In Oct. 2013, and after months of heated negotiations between Harvard and Allstonians, the BRA approved a scaled-down Institutional Master Plan for Allston development, including a new Barry’s Corner Residential and Retail Commons and a $43 million community benefits package.

That December, Faust and Menino—wearing long dark coats and bearing shovels—ceremonially broke ground on the Barry’s Corner project, a retail and residential complex Faust said she hoped would bring “new energy to the intersection between Harvard and the Allston community.”

Nearly four years in, though, revitalization seems to be a work in progress. While some Harvard graduate students have moved to the area, many say Barry’s Corner is more subdued than Cambridge and the rest of Allston.

“I think it’s an up-and-coming area, but it is kind of slow right now,” said Kelly Burke, a Business School student who currently lives in Continuum, a luxury apartment and retail development that began leasing apartments in 2015.

Andrew Alesbury, a student at the Kennedy School and Design School who lives just outside of Barry’s Corner, said the area “feels a bit like a moonscape with the massive parking lots.”

“Only the Continuum building makes it feel like you’re not standing out in the middle of a foreign planet,” he said. 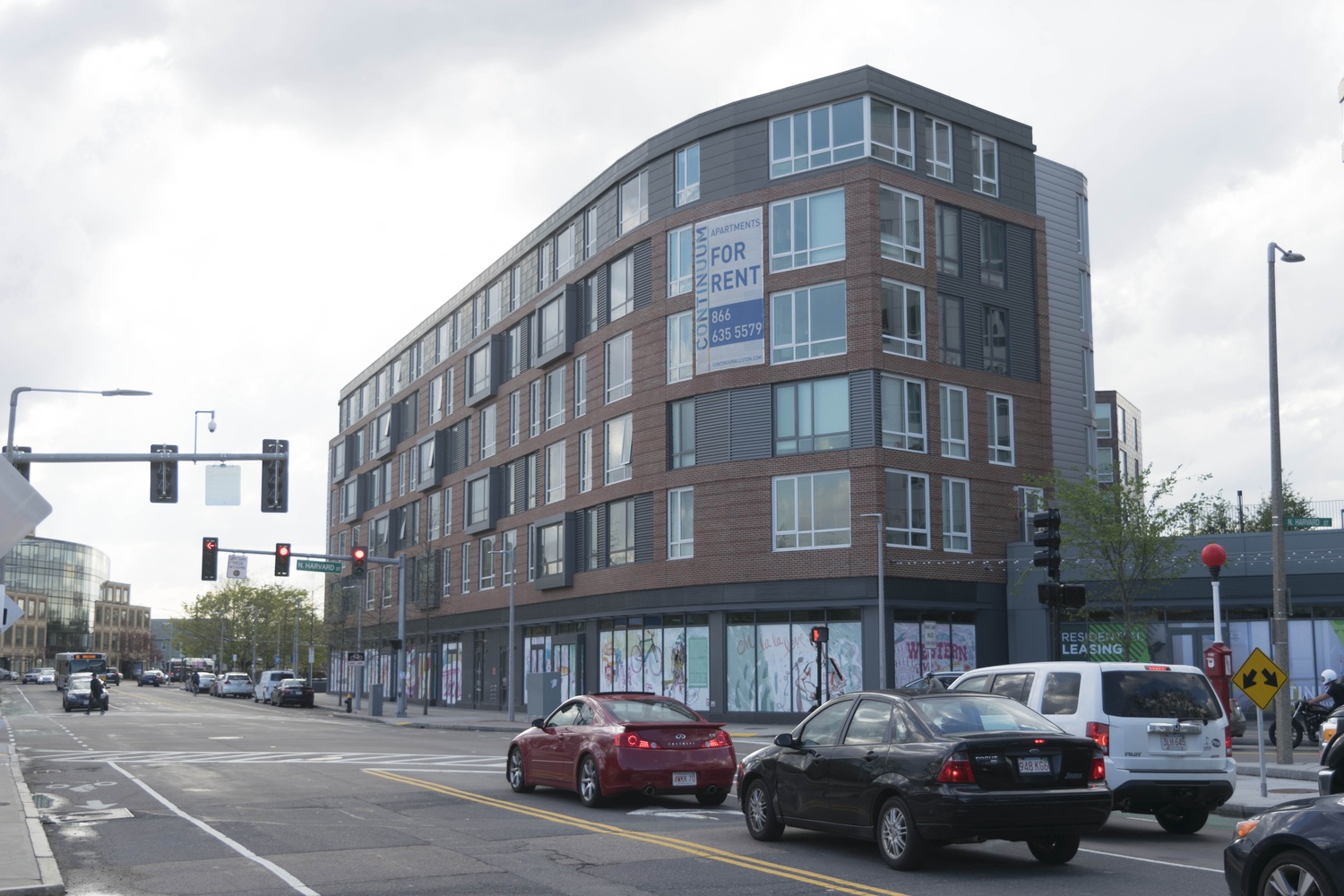 The Continuum apartment complex is located at the intersection of Western Ave and North Harvard St. By Grace Z. Li

For lifetime residents like McCall, too, the neighborhood has noticeably quieted since her childhood. “It doesn’t even feel like Barry’s Corner anymore. There’s nothing here,” she said.

There are, however, signs of progress. According to Samuels & Associates—the developers Harvard selected in 2012 to build Continuum—grocery store Trader Joe’s and restaurant Our Father’s Deli are slated to open Barry’s Corner locations later this year.

“There’s certainly more work to do, but when I started working in the neighborhood a decade ago, there was no Stone Hearth Pizza—that was a gas station,” said Gerald Autler, a senior project manager for the Boston Planning and Development Agency. “There was no Swissbäkers—that was a Volkswagen dealership. There was certainly no mixed-use residential and retail development like Continuum.”

Larger concerns loom as well. Allstonians have called for more affordable housing and increased homeownership in the neighborhood, a rental-dominated area that has one of the lowest homeownership rates in Boston.

Jo-Ann Barbour, the executive director of Charlesview Apartments—a mixed-income development in North Allston—said the neighborhood is in need of more affordable units for low-income residents. 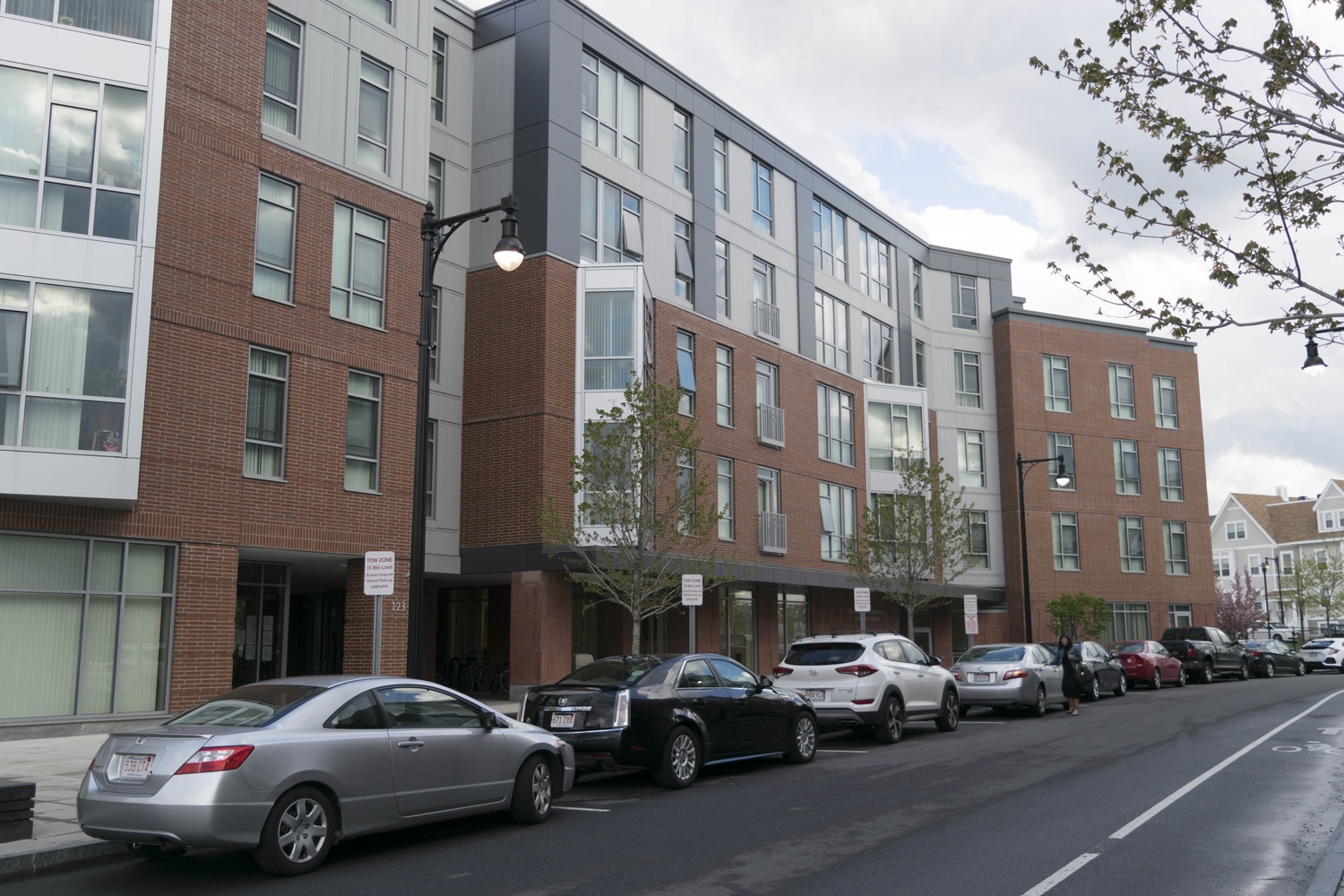 The Charlesview housing complex sits a few blocks down from Barry's Corner on Western Ave. By Grace Z. Li

“We have a waitlist of over 1,300 people. We moved in six new families last year. The turnover is very low,” said Barbour.

Rita M. DiGesse, who has lived in the same house in North Allston for the past 87 years, is one of many residents who have expressed concern about the impact of “transient populations” on Barry’s Corner: Residents “who come and go” and “probably don’t even know their neighbors,” she said, contribute to a lack of cohesion in the neighborhood.

“There’s more civic engagement when people are invested in the area and have something to protect,” agreed D’Isidoro, an Allston Civic Association board member.

Both the BPDA and Harvard officials have acknowledged these concerns, and part of the University’s community benefits package has been earmarked for housing initiatives.

Despite concerns about housing affordability and the slow rate of change in the neighborhood, both Allstonians and Harvard officials say town-gown relationships are improving.

The Harvard-Allston Task Force was appointed by the BRA in 2006 as a neighborhood advisory group for Harvard’s Allston developments. Residents continue to bombard the University with questions and requests at Task Force meetings because expectations of Harvard are higher now, said Shen, the former chief planner of Boston. 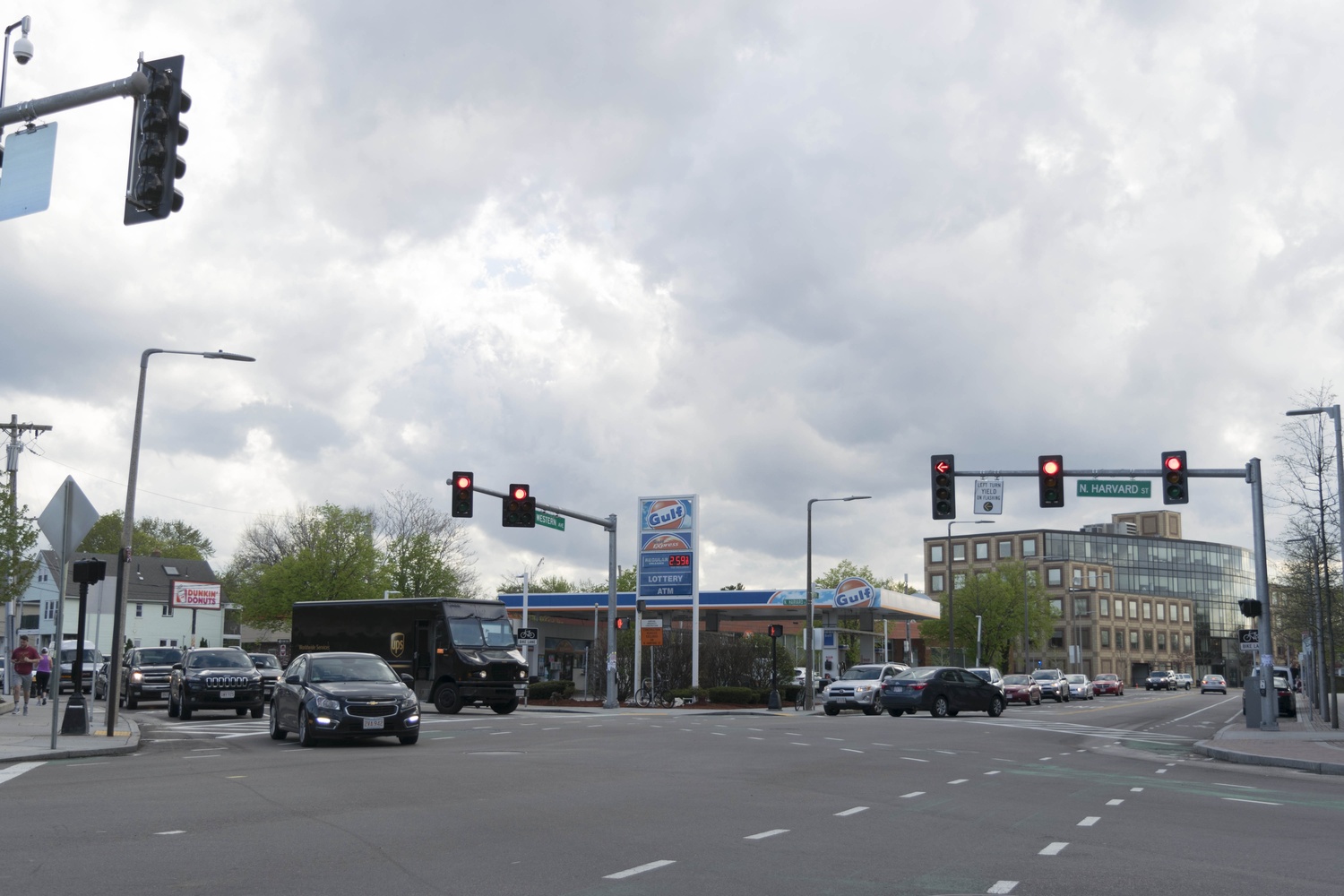 Barry's Corner today, at the intersection of Western Ave and North Harvard St in Allston. By Grace Z. Li

“There are things that they can ask Harvard that ten years ago would have been unthinkable to ask,” he said.

Casey, the Harvard spokesperson, agreed. “We had constructive tensions over issues because they were challenging us to do more,” he said.

And as Harvard works towards Faust’s imagined “future in which all roads lead to Allston,” Casey said, integrating North Allston residents with the University is “built into the design.” Plans for the new School of Engineering and Applied Sciences complex include multiple entrances along Western Ave. that lead to a food court and a green space open to the public, he said.

D’Isidoro and other Allstonians, too, are hopeful. After “a part of the community was severed in a very dramatic way” during redevelopment in the 1960s, former Barry’s Corner residents continued to hold reunions that were “unbelievably well-attended,” he said.

For D’Isidoro, Harvard’s Barry’s Corner developments may be a way to revive the sense of home that once existed at the corner of North Harvard St. and Western Ave.

“We are hopeful and optimistic that the sense of spirit and energy that was once present here will be back,” D’Isidoro said. “A lot has changed, but if done right, this could be a dynamic public square again.”