From a Queen to a Colony: The Bee Club was Born 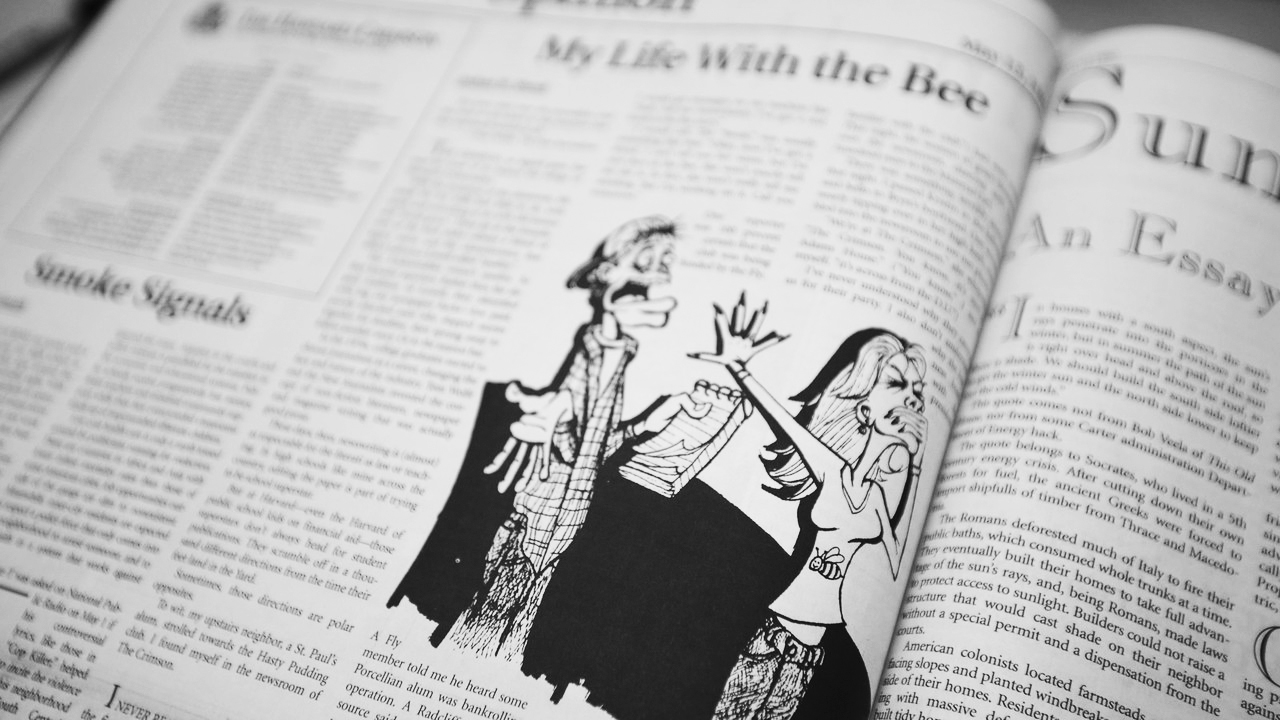 A cartoon about the then recently-frmed Bee Club, which appeared in The Crimson during the 1991-92 school year. By Annie E. Schugart
By William L. Wang, Crimson Staff Writer

In the fall of 1991, a group of undergraduate women formed an all-female social club they called the Bee. Though Harvard had had all-male final clubs for over a century, the Bee was the first final club for women. The campus was set abuzz.

Like the male final clubs, the up-and-coming organization would be best known for its silence. According to a December 1991 article published in The Crimson, alleged members of The Bee declined to comment, often responding to interview requests identically with: “I’m sorry. I cannot help you with your story.”

“It does a disservice to the women’s community here,” Frucher said at the time. “We should try things that aren’t exclusive.”

Yet the few Bee members willing to speak to the press insisted that it was a supportive and “empowering” space for women. “For me, it wasn’t about competing with the final clubs or replicating them,” Amy Salzhauer ’91, a trustee of the Bee, said in a recent interview. “It was more about making our own community for people who identify as women.”

The club was formed during a hostile time for single-gender social organizations.

The relationship between the clubs and the University had been tense since at least 1984, when administrators issued an ultimatum: go co-ed or go private. The all-male final clubs and fraternities chose the latter but remained a prominent element of Harvard’s social fabric, drawing the ire of administrators.

“Fraternities are illegal at Harvard,” Epps said in 1991. “We have very great doubts about the efficacy of fraternities because many have the reputation for the abuse of alcohol and for interference with academic work.”

Though the Bee was a novelty, administrators adhered to precedent: Then-Dean of Students Archie C. Epps III said in December 1991 that the Bee could not be recognized by the University.

Historically, all-female social spaces at Harvard and Radcliffe had struggled to get off the ground.

In the spring of 1990, students from the Radcliffe Union of Students called for the creation of a women’s center, gathering over 1,000 signatures to urge then-Radcliffe President Laura S. Wilson to consider the measure. However, such a building was never created.

Proposed sororities had neither the resources of established final clubs nor the support of national organizations. In November 1991, the National Panhellenic Conference withdrew from a planned Harvard sorority after learning about the College’s policies on fraternities and sororities.

Even the Athena Club, an inclusive all-female club founded in March 1990, was short-lived—it fizzled out within a few years of its creation.

Bereft, former Athena Club members formed the Bee, named after a “sewing bee” formed by Cambridge women during the Civil War. The club succeeded where others had failed.

“It was a very easy founding, I think, for the women on campus,” Salzhauer, who was also a founder of the Athena Club, said. “We really did have the support of the administration and the support of so many students and… existing organizations.”

Salzhauer said that she did not hear negative reactions during her involvement in the Athena Club and the Bee. Overall, she said she found the experience “positive,” “happy,” and “very empowering.”

Although the Bee has never owned its own building, members of the club found space. In its first year, the Bee held social events by renting the Harvard Advocate’s building in 21 South St. as well as The Crimson’s property at 14 Plympton St.

Eventually, the Bee started leasing the Fly Club’s location at 45 Dunster St., where it remains today.

Sororities have also grown to play an important role in campus social life, as seen by the record-breaking 286 women who rushed Harvard’s four sororities in 2017.

“The formation of the Bee served as a model for other clubs to follow,” J. Suzanne Mosher ’91 said “The premise was to provide women with the same opportunity to come together in a welcome space where individuals can be heard and find a pathway to leadership.”

In the spring of 2016, the University announced sweeping sanctions barring undergraduate members of unrecognized single-gender social organizations from holding athletic team captaincies and leadership positions in all recognized student groups and making them ineligible for College endorsement for prestigious awards such as the Rhodes scholarship.

Regardless of current sanctions, some club members are proud to have set the precedent of all-female social spaces on Harvard’s campus.

“The legacy of having a space that was controlled by the women, to me, is a really proud legacy,” Salzhauer said.