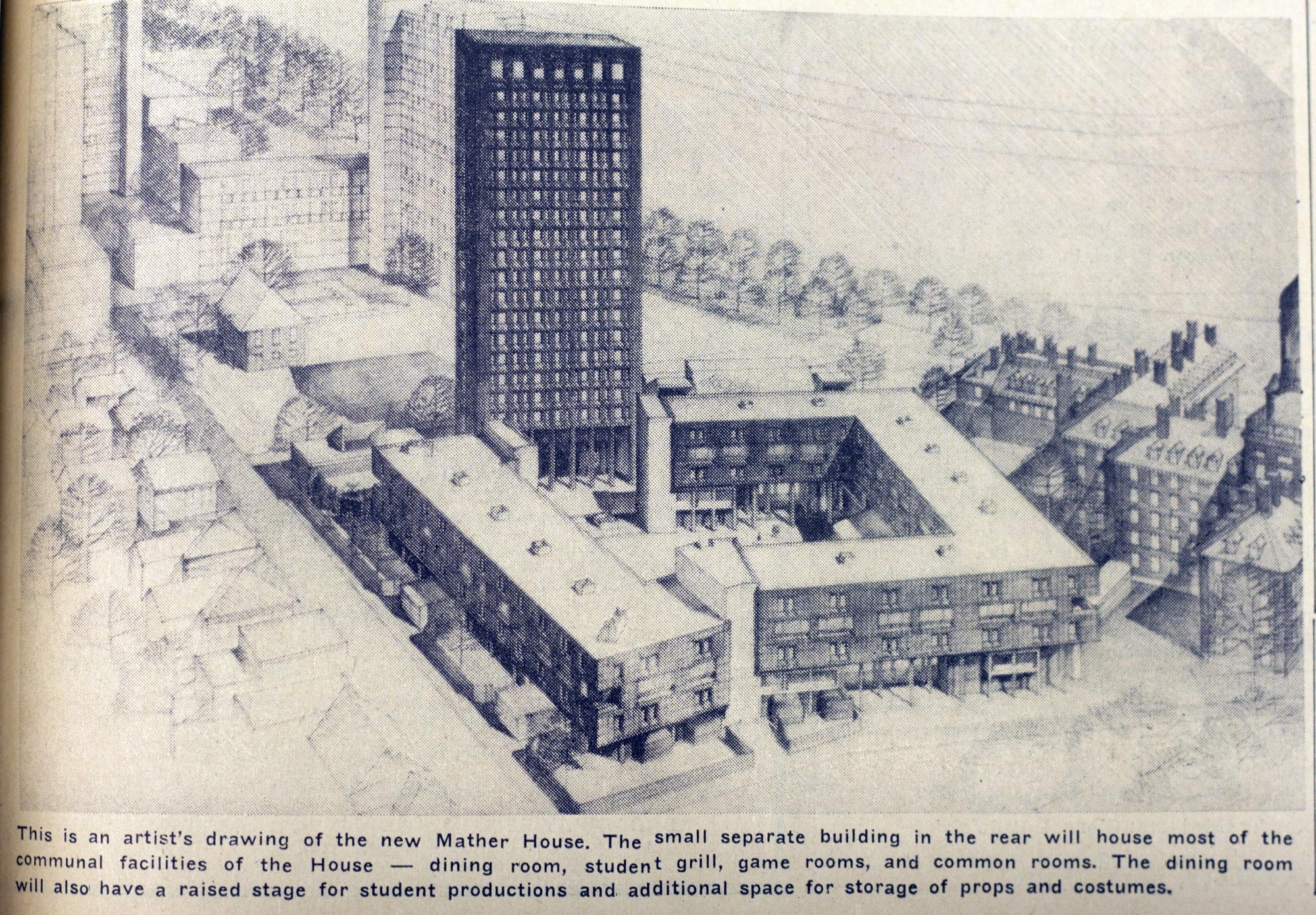 Big, bold, and Brutalist, Mather's signature nineteen-story monolith towers over the Charles from the corner of Cowperthwaite and Banks.
By Luke W. Xu

Of all the undergraduate Houses, Mather House is perhaps the most distinctive. Big, bold, and Brutalist, its signature nineteen-story monolith towers over the Charles from the corner of Cowperthwaite and Banks. Below, the Mather low-rise, squat and mechanical, encircles a quadrangle with trees and benches.

To many, Mather is known for its blocky appearance; some students even call it “the box that Dunster came in.” Mather does not immediately evoke the images of a classic Harvard that Eliot or Adams might. Instead, Mather points to a different Harvard era: the 1960s.

The decade was witness to a sharp overcrowding crisis among Harvard’s undergraduate Houses. The crisis reached a peak in the late 1960s, exacerbated by increased enrollment and an unwillingness of students to take leaves of absence, which would make them draft-eligible for the Vietnam War.

Harvard’s plan for the construction of Mather House was in many regards ambitious, but the project was plagued by delays and budgetary constraints.

Harvard hired architect Jean Paul Carlhian of Shepley Bulfinch Richardson and Abbot, the architecture firm that designed the other River Houses, as the chief designer of the tenth House.

The official cost estimate for construction was $8 million, but as construction progressed, University officials began to avoid talking about the figure and instead proposed cost-cutting measures such as replacing brick sidewalks with cement ones.

“The costs were much higher than we had anticipated,” Pusey admitted in a 1967 interview.

“There was supposed to be terracotta tiles on the outside and they shortchanged us one elevator, so right near the entrance as you walk in on the left side, there’s an empty elevator shaft,” he said. 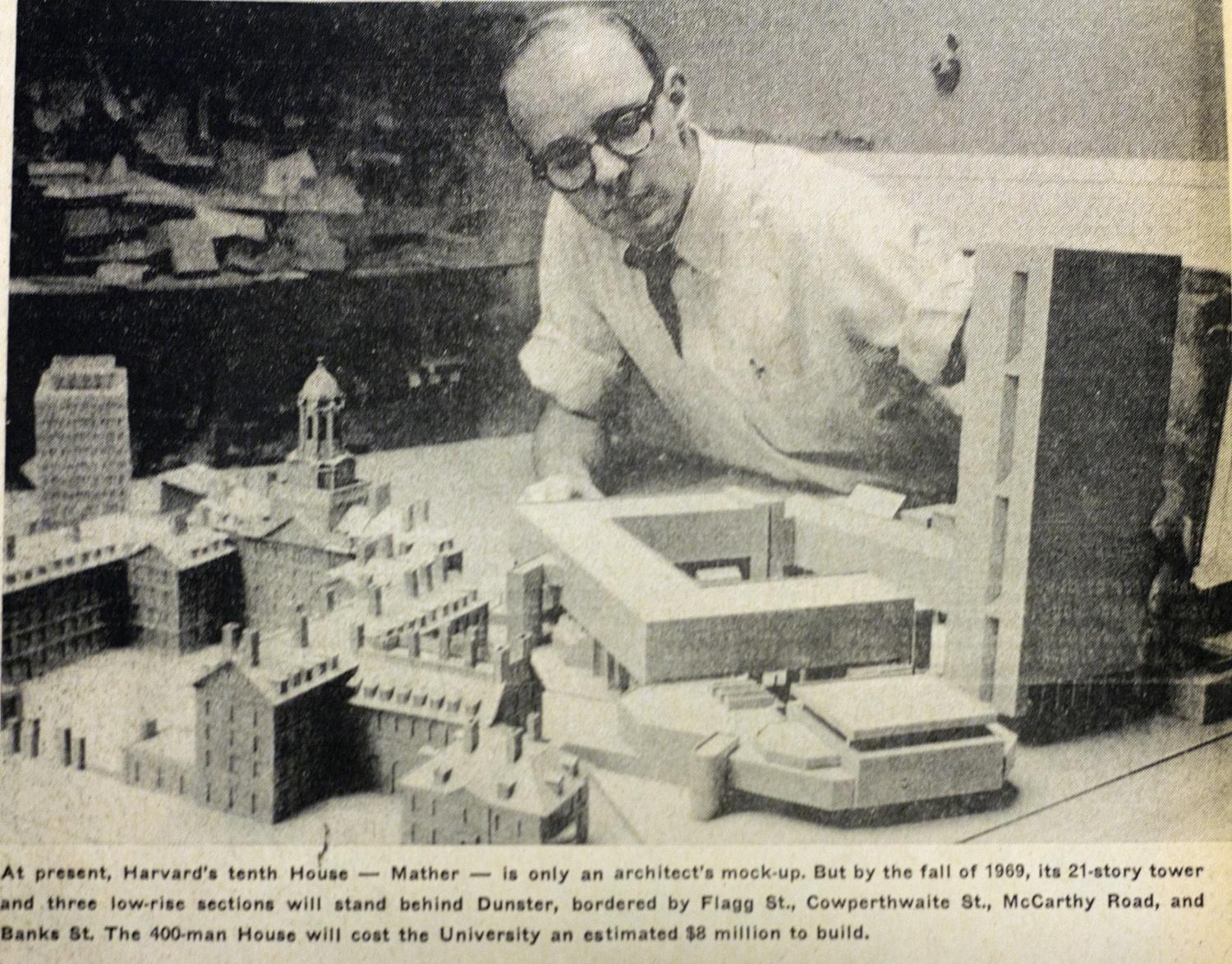 Additionally, according to McDonald, Carlhian planned for artwork to line Mather’s interior walls.

“Jean Paul Carlhian was determined at the time that there be art everywhere in Mather. Only his idea was that it would be art from the Fogg Museum and he wasn’t thinking about any kind of security problem,” she said.

Besides the tiles and the elevator, budget trimming also ended up doing away with soundproofing, carpeting, and closet doors.

Construction began in the late summer of 1966, but financial issues delayed Mather’s opening an entire year, from the originally projected Sept. of 1969 to the fall of 1970.

'For a Modern Student'

Predating the construction of the Science Center in 1972 and Canaday Hall in 1974, Mather was Harvard’s first truly modernist building. Despite the various amenities the new building offered, student reactions to Mather often ranged from apathetic to mixed.

“I don’t think it was a topic of much conversation. We were more worried about the Vietnam War,” he said. “Back then, people were into modern things. It was the tail-end of mid-century of modernism so people generally thought it was a cool looking building.” 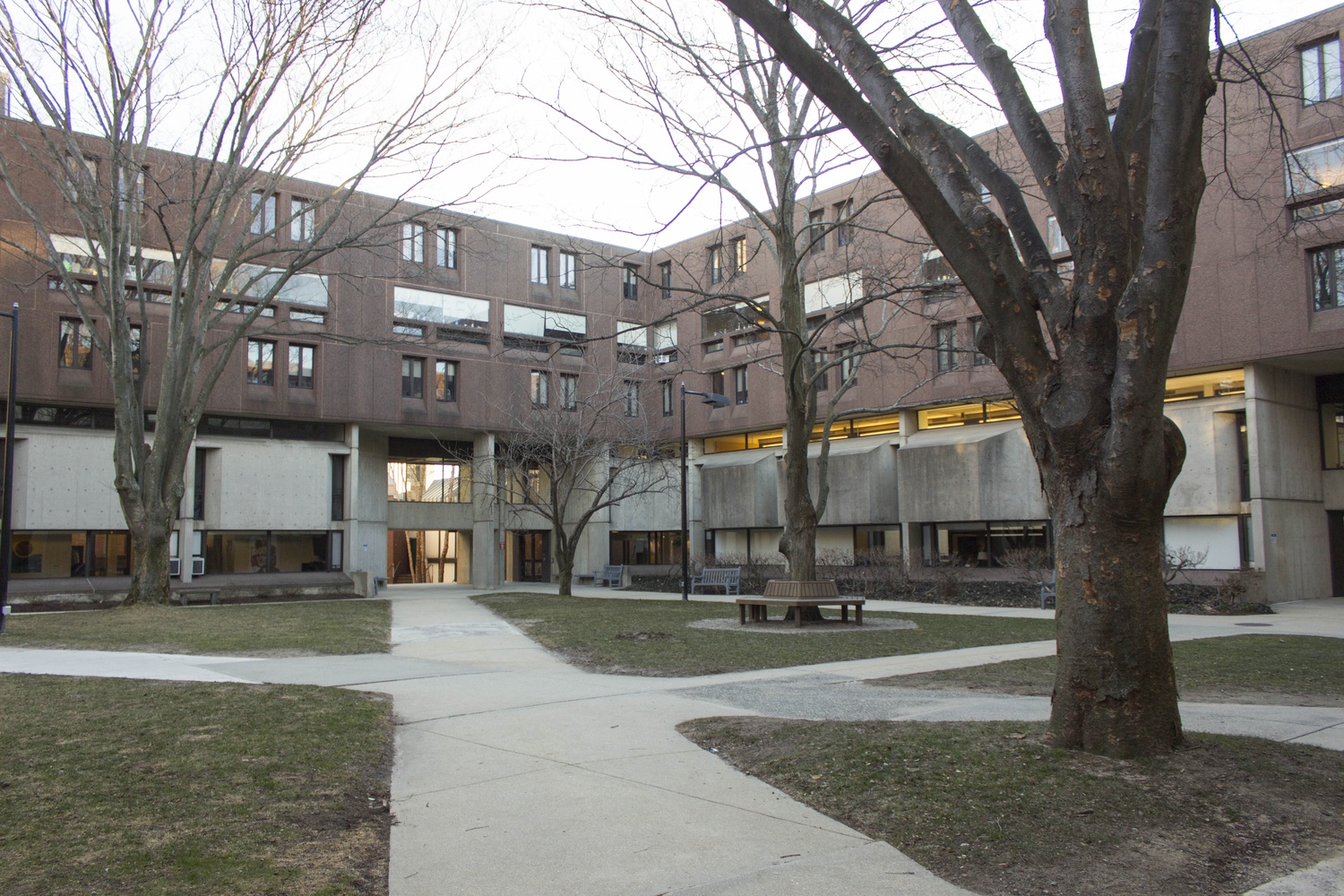 The courtyard in Mather House. By Gladys M Kisela

Other students, however, said they were decidedly unsatisfied with Mather’s architecture.

Martin H. Kaplan ’71, a former Dunster resident and Crimson editor, wrote in an op-ed at the time that he believed “Mather House almost demands that we abandon our way of seeing.”

“Mather House is the future. Stone cold, fluorescent, angular, it juts into our eyes like a stiletto from the next century,” Kaplan wrote.

Despite some shortcomings, Mather succeeded in alleviating the overcrowding crisis in the undergraduate Houses, Payne said.

“In Lowell House, we had four guys in a suite originally designed for two. One year I slept in the closet. My bed just fit into the closet. The next year, we had two bathrooms, so I turned one of the bathrooms into my bedroom,” Payne said. “I think in Mather we all had our separate bedrooms.”

The new space Mather provided allowed the College to lower the number of students permitted to live off-campus. Mather also gave Harvard the space necessary to temporarily halt its practice of turning doubles into triples and triples into quads to squeeze in more students.

The availability of guaranteed singles remains one of Mather’s biggest selling points today, and McDonald said that singles made a similar, radical impact back then.

“It was conceived as a modern house for a modern student, which was different from the way the conception of student life was in the 1930s. So the idea that every student would have a single was remarkable,” she said.

Despite being one of Harvard’s newest undergraduate Houses, Mather’s history goes back earlier to its namesake, Increase Mather, class of 1656.

Increase was a Puritanical minister and the first President of Harvard to be born in North America. He was first suggested as a possible namesake for what became Leverett House in 1930, but the Harvard Corporation shut down the idea.

Although he was heavily influential in securing charters for the Massachusetts Bay Colony and for Harvard, the decision to name the House after Increase was controversial: His son, Cotton Mather, was involved in the Salem Witch Trials, and Increase owned a number of slaves.

Earlier this year, the House unveiled an exhibit that delved into the life and history of Increase Mather. The project was led by Mather students, McDonald said, and inspired by ongoing debates about how best to confront Harvard’s involvement in slavery. 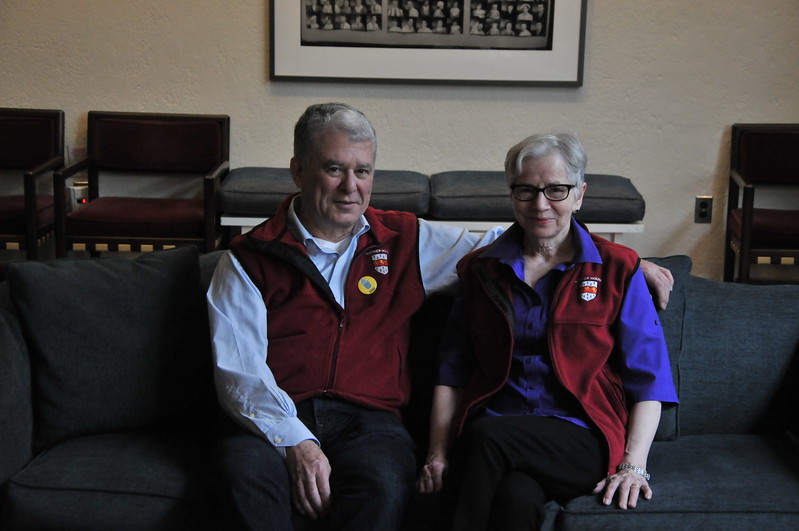 “I think everybody at Harvard is trying to address with this issue of what do you do with this history of slavery. Do you try to erase it pretend it didn’t happen, or do you try to make it available to everybody and make it public so that people can learn from it? That was one of the main motivations that started off this inquiry,” he said.

Rosengarten and McDonald also emphasized that Mather House’s values are not as puritanical as Increase Mather’s were.