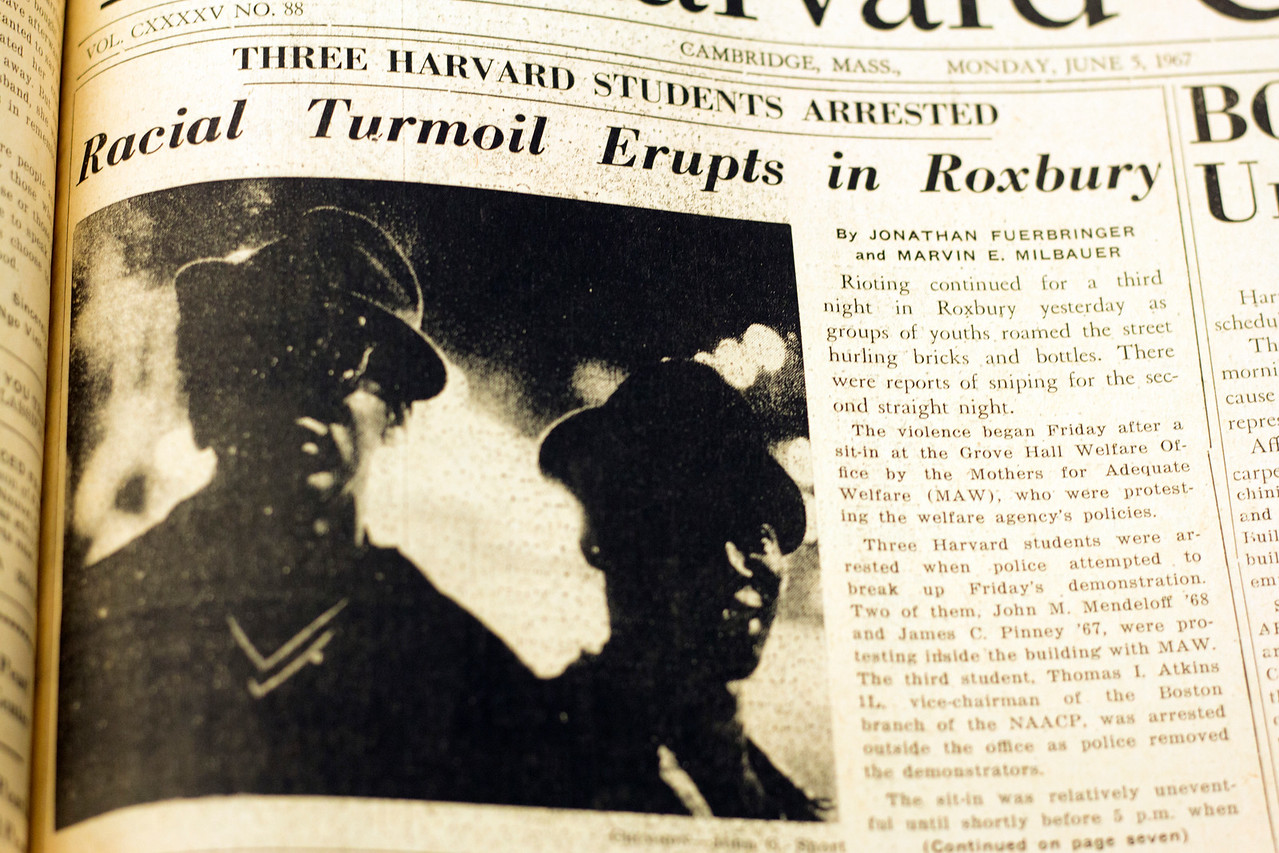 A small handful of Harvard students were there in Roxbury to watch a crucial moment in Boston history unfold.
By Jamie D. Halper

In the mid to late 1960s, race-fueled riots swept the country.

In cities like Detroit, Harlem, Philadelphia, and Los Angeles, daily routines ground to a halt as protesters took to streets and violence erupted amongst residents frustrated by the discrimination and poverty that plagued cities.

Despite the backdrop of tumultuous race relations, all was quiet in a section of Boston’s Roxbury neighborhood, which was similarly as poor and racially segregated as the cities where riots did take hold.

In 1965, Massachusetts State Representative Frank Holgate said that there was potential in many places for riots, but that he found it unlikely that violence would materialize in Roxbury, adding he found living conditions there to be better than in other cities where riots had taken place.

That same year, John Mendelhof an organizer with activist group Dudley Street Action Center said that instead of riots in Boston, he expected to see increased urban gang warfare.

Noel Day, head of Massachusetts Freedom Movement, another activist group, said in 1965 that cities like Indianapolis and Gary were closer to experiencing race-based violence than Boston. However, he said, "riots are inevitable as long as remedies are approached in a less than complete way."

A peaceful sit-in organized by Mothers for Adequate Welfare devolved into violent clashes between the police and demonstrators, ending months of peace in the previously quiet neighborhood.

A small handful of Harvard students were there to watch a crucial moment in Boston history unfold.

The MAW sit-in at the Welfare Administration Building in Roxbury aimed to protest inequalities in welfare benefit distribution and demand a response from the government to rectify the issue. When police arrived at the scene, they stormed the building where the sit-in was taking place and began to beat and arrest protesters—including students and mothers. 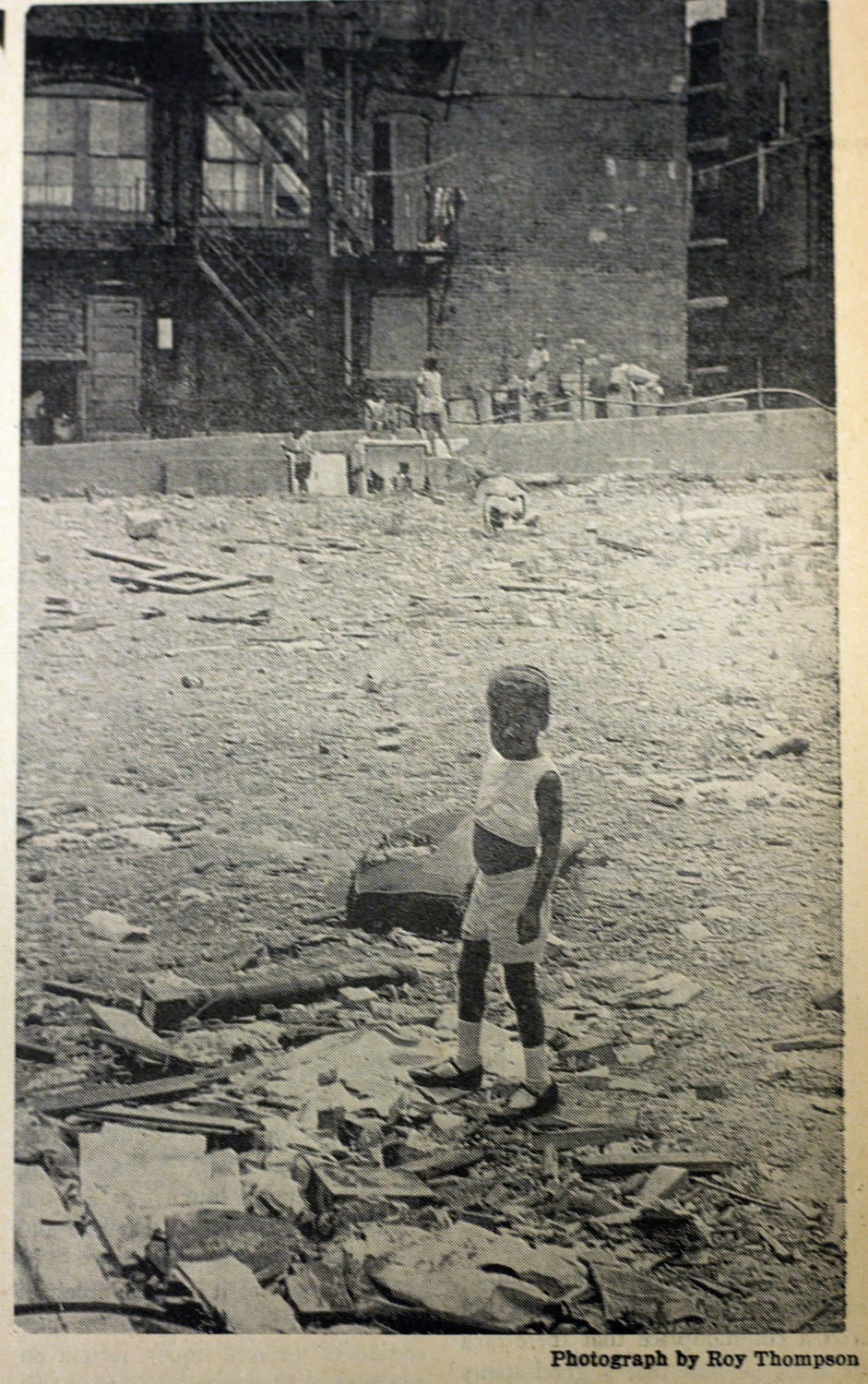 Massachusetts State Representative Byron D. Rushing ’64, a student at the riot, recalled that before violence broke out at the protest, there were many local residents at the building supporting the protesting women.

“The general feeling in the community was that they needed to maintain support for the mothers and that people perceived that the demonstration was going to be drawn out,” Rushing said.

Among those supporters were half a dozen Harvard students who were members of the school’s Students for a Democratic Society chapter. John M. Mendeloff ’68 was one such student.

“By that time, a fairly sizeable crowd gathered outside the building, and when the police started carrying people out, people in the crowd got quite upset, and I became no longer an observer,” Mendeloff said. “We were all taken to jail for the next several hours.”

Since he had been in custody during the bulk of the violence, Mendeloff didn’t find out until later that the confrontation had escalated into a full-scale riot. Rushing, on the other hand, though also arrested and taken to jail, was able to return and attempted to mediate the continuing conflict by speaking with police chased rioters down the streets of Roxbury.

Rushing said that the brutal police response shocked Roxbury’s black residents and contributed to a delayed response to the violence.

“They were surprised by it,” Rushing said. “It took a while for the black leadership and the people to get a sense of how angry black people were in Roxbury at the time, and this was the event that allowed them to express that anger.”

Immediately following the riots, anger was rife in Roxbury, Rushing said. The city, which was at the time transitioning between the mayorship of John F. Collins and Kevin White, did not attempt to strike a reconciliatory tone with the demonstrators, according to Rushing.

“There was no attempt, no symbolic ‘let’s calm everyone down’ thing,” Rushing said. “Kevin White had no clue about the black community in Boston, so he had no staff people who might say, ‘It might be a good thing if you appeared a day or two later and said sorry that this happened.’”

No Justice, No Peace

For some, the lack of government response foreclosed the possibility for justice.

“There was a feeling that any of the discussion that had gone on up until there about working together with black people just dissolved,” Rushing said.

The riot had a chilling effect on further race-related demonstrations. After Martin Luther King, Jr. was assassinated in 1968, instead of reacting violently as many did across the country, the black Boston residents decided not riot and instead recentered organizing efforts around ending residential segregation and promoting economic development.

“There was violence after the announcement of Martin Luther King’s assassination, but there was a general feeling among the young people that it wasn't worth it, that they had to find a new way to express their anger,” Rushing said. “There was a lot of movement to increase the areas in Boston in which black people would be allowed to live.” 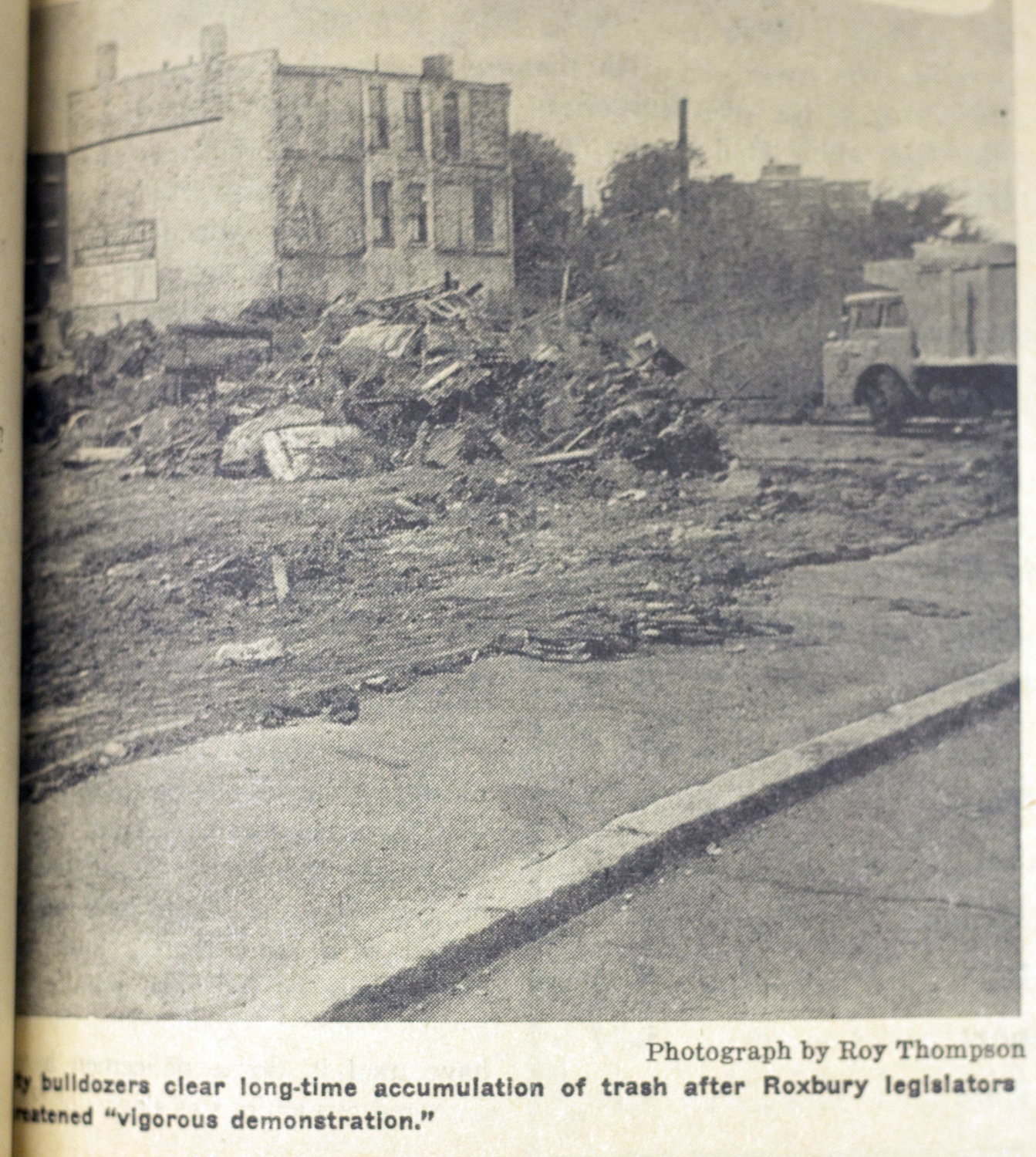 In addition to these efforts, organizations like Youth Alliance were established to deal with various community issues and needs. Youth Alliance’s headquarters were on Blue Hills Ave., the same street as the welfare office where the riots began. At first, its members worked as nightly neighborhood patrols to remove the need for city police in the community.

As the organization grew, it began to provide educational opportunities for black youth in the community, particularly those who had dropped out of schools for various reasons, including a the failure of the school system to cater to students from non-white backgrounds.

Despite the prominence of these events in Boston’s history, most Harvard students at the time were more preoccupied with the Vietnam War and draft resistance than the Roxbury race riot.

establish the group, but by the time the demonstration happened, the group was led by other people who were working more full time and students were more of an ancillary role,” Mendeloff said.