Forward She Goes: Female Athlete of the Year 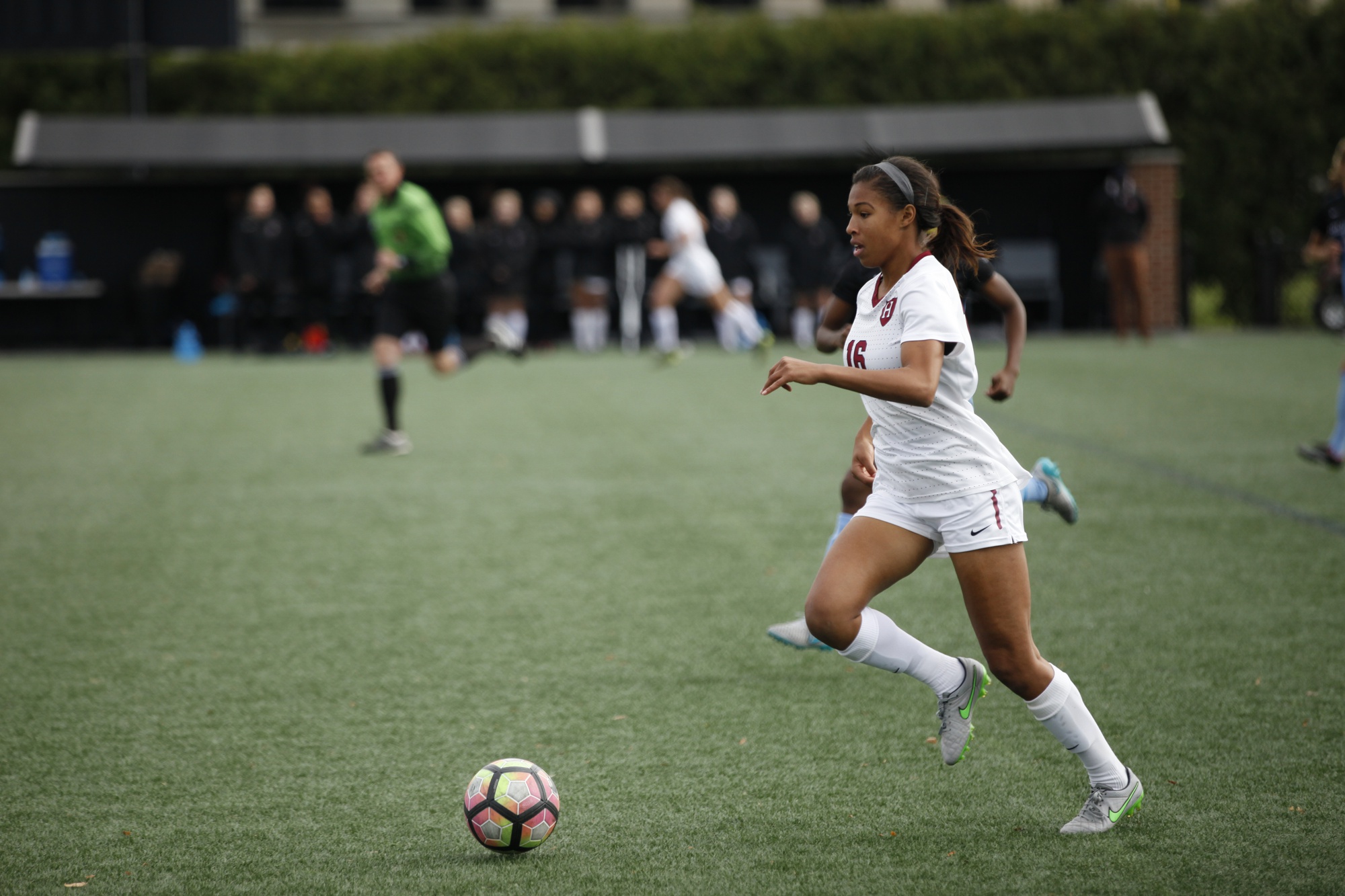 As the sun set on Stevenson-Pincince Field on a clear October day in Providence, R.I., the Harvard women’s soccer team lined up for a free kick near midfield in the 89th minute. The squad knew that this shot would be one of its last chances to tie the game.

As the ball left the foot of sophomore Leah Mohammadi, a connection that would happen several times over the course of the season snapped into place. The ball arced toward the left side. Senior forward Midge Purce one-touched it to classmate Rachel Garcia, who flew into the box and finished the ball into the top left corner. Header, header, goal.

What significance did these six seconds hold? The game finished tied at one apiece in double-overtime to keep the Crimson undefeated in Ivy League play. Three matchups later, Harvard would go on to take the conference crown and preserve an undefeated record, with Brown in close pursuit at second place.

Purce, the Ivy League Player of the Year, points to that game-saving sequence as one of her favorite moments from her title-winning senior season. In a year of clutch goals, Garcia’s Providence score was especially important, as it warded off the Bears’ upset bid and kept Harvard in the driver’s seat midway through Ivy play.

Purce has garnered countless accolades as her four-year career with the Crimson draws to a close. Certainly, the senior from Olney, Md. fueled the team’s 2016 title run.

But whether it be Garcia’s goal at Brown, Caroline Chagares’ goal against Yale, or the combined team effort in the championship-clinching game against Columbia, Purce tends to highlight her teammates when recalling the high points of her senior season.

“It was an amazing experience,” she said. “I wouldn’t trade it for the world.”

Few question who was at the fore of women’s soccer run to an Ivy championship.

Let’s get Purce’s individual accomplishments out of the way. The veteran earned a spot on the NSCAA All-American First Team, was selected as the Ivy League Player of the Year for the second time, was chosen as a semifinalist for the MAC Hermann Award, and made it to the All-Ivy League First Team for the fourth straight year. 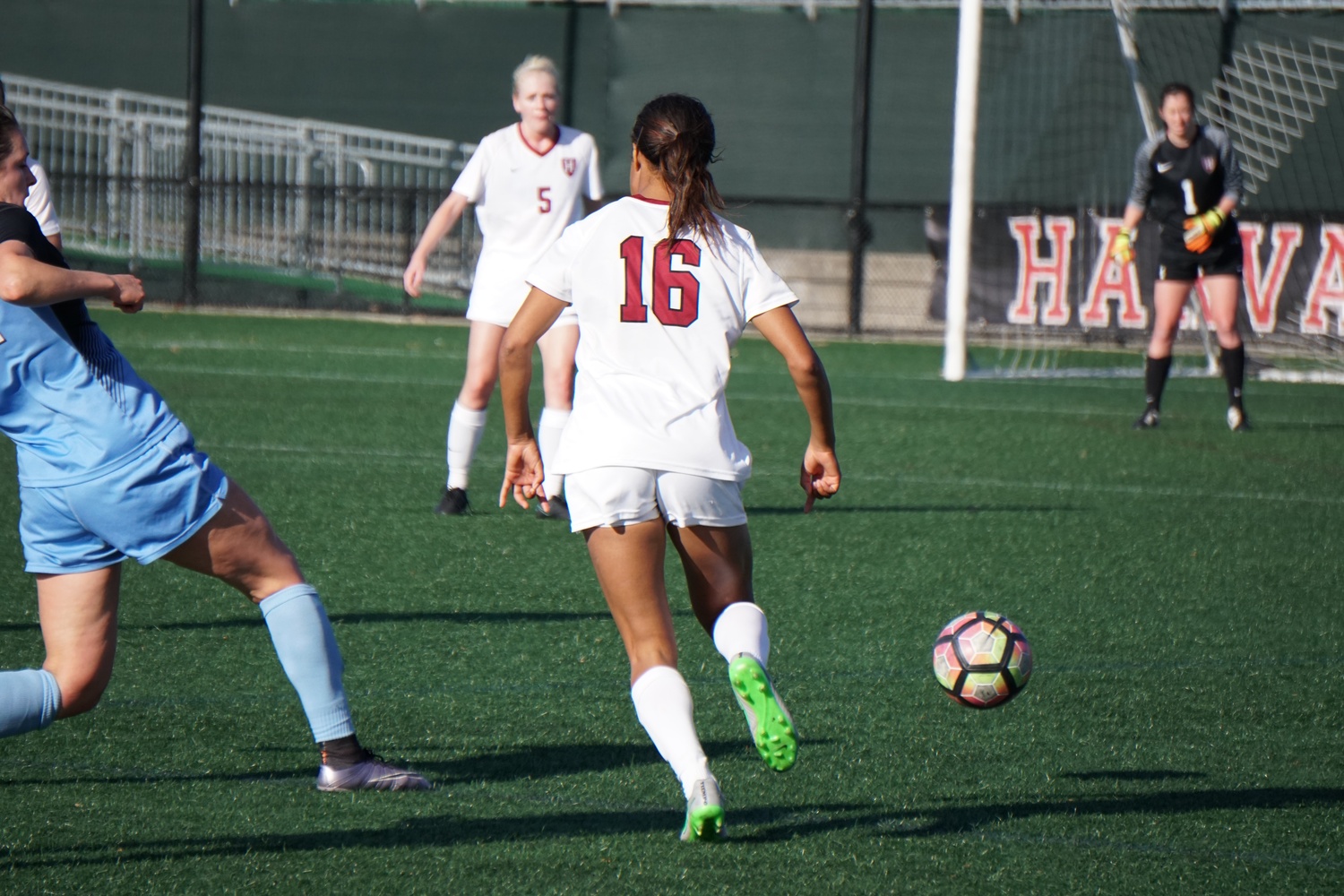 The forward led the Ancient Eight in goals (12), points (28), shots (87), and game-winning goals (four). She ranks third all-time in the program and seventh all-time in Ivy League history with 42 career finishes. As a result of this success, Purce was drafted ninth overall in the first round by the Boston Breakers of the National Women’s Soccer League.

“She really was one of the top players in Ivy League history,” Harvard coach Chris Hamblin said. “If you look at it from a statistical standpoint, that’s clearly demonstrated. If you look at it in the games, over the course of her career, she was a threat in every game she played.”

Over the season, Purce added four assists, good for second on the team. Her speed and attacking presence warranted constant defense from the opposition and opened opportunities for her teammates.

Purce also spent time at a new position this season: Hamblin utilized Purce’s attacking versatility to put her on the wings for a good portion of 2016. The move came with great effect in the 3-5-2 setup that the Crimson deployed all season long, which Hamblin explains as “one less defender and one more midfield player, which gave us a little bit more of an attacking presence.”

“She spent time at center-forward, but I think that while Midge was incredibly dominant as a forward. she was very, very challenging to defend from a wide position, because she had more time and space,” Hamblin said. “Tactically, we were able to move Midge around a lot, and that caused teams a lot of problems.”

Along with co-captain Bailey Gary and junior Dani Stollar, Purce was one of three players to start all 17 games for Harvard. Her consistency and final-third execution led the team to a 10-4-3 record overall and a 5-0-2 record in Ivy League play. Across four seasons, Purce was part of a senior class that won 22 conference games and lost just two.

“The high accolades are worthy,” Hamblin said. “There’s no doubt in my mind [that] she goes down as a Harvard women’s soccer legend.”

DEFERRING TO THE TEAM

While Purce can go toe-to-toe with anyone when it comes to individual accolades, she prefers to talk about her teammates first.

“My team did an absolutely incredible job this year,” Purce said. “This was a very special season, and it has to be my favorite, by far, because these girls have overcome so many hindrances that were posed throughout the year.”

“I just happen to be the person who puts the ball into the back of the net—the last person to touch the ball—but there’s so much buildup to that. That’s what people miss,” she added. “Even the people whom you don’t always see on the field, they contributed in such amazing ways to allow us to have the results we did.”

Purce gave just a couple examples of the intangibles that made this year’s squad a championship-caliber team.

“[Senior] Marissa Segala was absolutely remarkable,” Purce said. “I would come to her and ask her, ‘What do you think, what do you see?’ [Freshman] Kat Hess, the same thing—‘What do you think we need to change?’ They’re fantastic soccer minds. Those are a few examples, but it was the definition of a team effort, where every single person was on board.”

In explaining how the 3-5-2 system bore fruit, Purce credited the stability and discipline of the defense and midfield. Having a veteran core of senior goalkeeper Lizzie Durack, junior Candy Janachowski, Segala, and Gary also helped.

“That was a huge change,” Purce said. “I’d never played [that system] with Harvard before.”

No matter the positional adjustments, consistent results followed. What Purce achieved since arriving in Cambridge from Good Counsel High School will be difficult for any future player to replicate.

"There's no doubt in my mind [that] she goes down as a Harvard women's soccer legend," Harvard coach Chris Hamblin said.

Right off the bat, Purce won Ivy League Rookie of the Year and Player of the Year in 2013—something no Ivy League competitor had ever done. She then won three conference titles in four years, which culminated in the program’s 16th trip to the NCAA tournament last November.

“I’m so happy I got to meet the people that I met, “ Purce said. “We faced a lot of external hindrances and issues that really could have changed our season. I’m so proud of the team and how they handled it with so much class. The end of the season was just fantastic.”

A CAREER IN BOSTON

On Jan. 12, 2017, the Boston Breakers drafted Purce ninth overall, making the forward the highest Ivy League draft pick ever, and the first player from Harvard to appear in the NWSL. Two months later, she signed with the team.

“She was a highly attractive prospect across the league,” Hamblin said. “[Breakers coach Matt] Beard being local, being able to see her on a consistent basis, really was able to understand her qualities. [He[ obviously thought high enough of her to take her in the first round.”

The Breakers play at Jordan Field, also the home field of both Crimson soccer teams. In the team’s press release, Beard wrote that, “Midge has really impressed since our preseason camp started. She is a quick, versatile forward who will give us something a bit different to the forwards that we already have.”

As for Purce? She’s already started three games for the Breakers.