No Days Off for Farris: Male Rookie of the Year 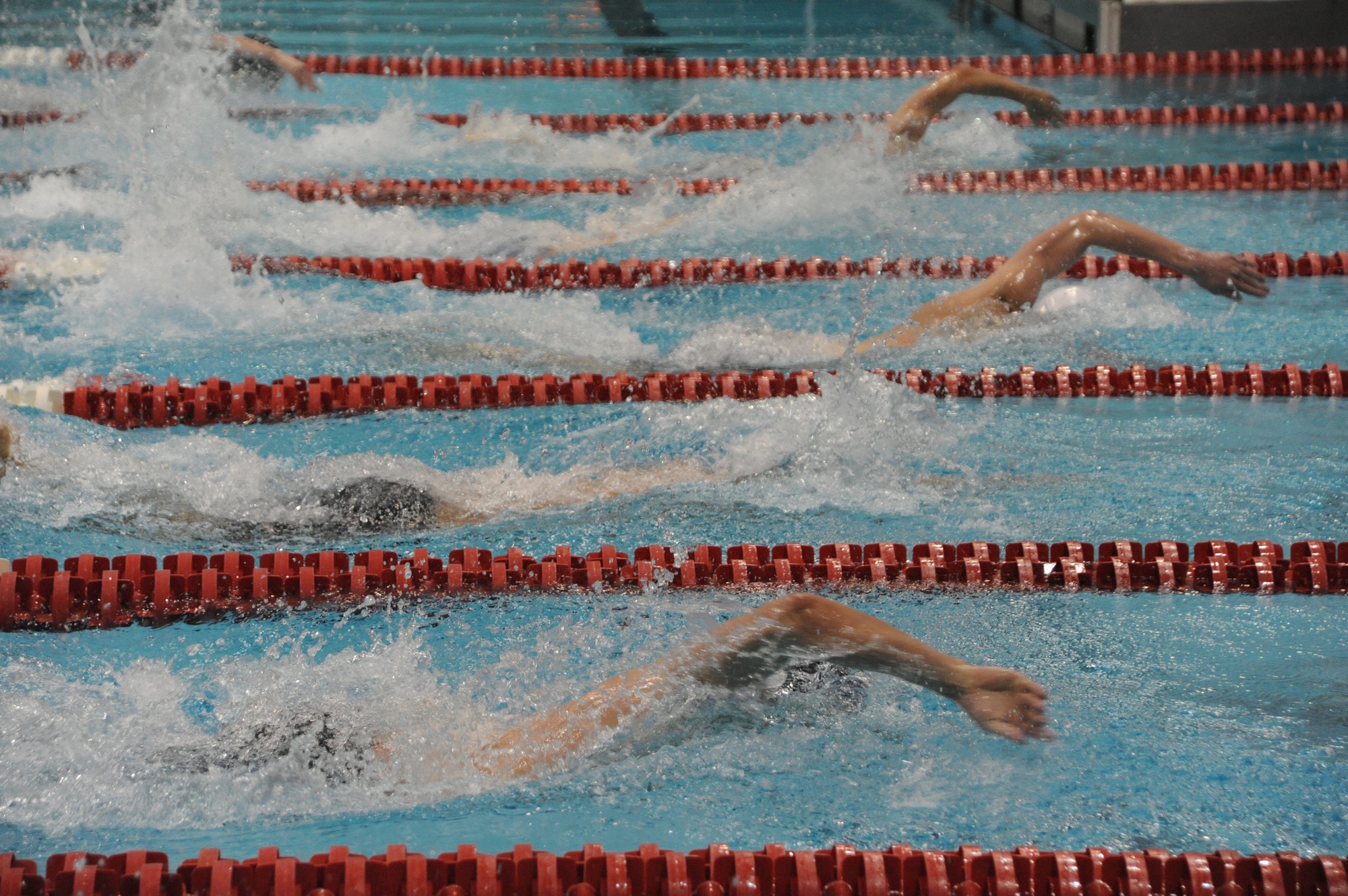 The 200-yard freestyle final at this year’s Ivy League men’s swimming championships was effectively over after the first 50 yards.

One lap in, freshman Dean Farris was already a second ahead of the next closest competitor and appeared to be extending his lead. By the time that he kicked off the race’s final 50 yards, the freshman was a full two seconds and a body-length in front of the second-place swimmer.

As he continued to pull away from the competition in the last lap, the question wasn’t whether Farris would win the race, but what his time would be.

The rookie arrived at Harvard with a personal-best mark of 1:36.0 in the 200 free. By the start of his finals race, he had cut that time down by nearly four seconds, setting a new personal record of 1:32.70 in the prelims of the event.

As Farris cruised through the final 25 yards, the expectant crowd filling up Blodgett Pool waited to see if the freshman could break his own record. The cheering started as soon as Farris touched the wall—two body lengths in front of the second-place finisher. Not only had the first-year won an Ivy League title and outdone his own personal-best time, but he’d broken his record by over a second. His final mark was 1:31.56.

Farris hadn’t been thinking about his time during the race.

“I was pretty nervous walking out to the blocks because of expectations I put on myself, but once I got into the water, all my training took over,” Farris said. “I just executed my race plan. It was like I was on autopilot.”

However, the rookie’s time was significant. His mark of 1:31.56 was the fastest in collegiate swimming for the season, making him the top-seeded swimmer in the 200 free for NCAA Championships.

His result also broke the event records for Harvard, Blodgett Pool, and the Ivy League Championship meet. In addition, Farris’ time was the sixth-fastest in collegiate history in the event. All five swimmers ahead of the first-year on the all-time record list were Olympians.

“Dean’s 200 free final at Ivy Champs was the single greatest performance I’ve witnessed in my four years at Harvard,” co-captain Eric Ronda said. “Not only was his time incredibly fast, but his pure dominance over the rest of the field was impressive and a lot of fun to watch.”

However, while Farris' teammates were impressed by his performance, they were not surprised by it. The rookie's 200 free final showing was just one highlight in a debut season filled with jaw-dropping results.

At the Ivy League Championships, Farris won seven events, breaking the same number of pool records, as well as setting six new school-best marks and smashing four meet records. For his efforts, the freshman was awarded the Phil Moriarty Award, given to the meet’s high-point swimmer.

Farris’ strong showing at the conference championships included individual wins in the 100 freestyle and 100 backstroke as well as victories in the 200 and 400 medley relays and 400 and 800 freestyle relays. Those first-place results helped propel Harvard to its first Ivy League title since 2014.

Farris played a similarly important part on the team throughout his rookie season.

“Dean was a significant source of reassurance for all of us on the team because we could always count on him to execute when we needed him to,” junior Koya Osada said. “I think Dean is certainly one of the most talented swimmers to ever come through the Harvard swimming program, but talent aside, his work ethic and dedication are unmatched.”

Farris arrived at Harvard with an already impressive résumé, including two junior national championships and a pair of Georgia state titles. The first-year also qualified for four events at the 2016 Olympic Trials and picked up top-75 finishes in each race, highlighted by a 39th-place result in the 100 freestyle.

As such, it was little surprise that he started contributing to Harvard’s success immediately after arriving in Cambridge. In his first meet for the Crimson, Farris picked up two individual wins, taking top marks in the 100 freestyle and 100 butterfly in a victory over Dartmouth and Cornell.

Between that first meet and the Ivy League Championships two months later, he failed to take first in just a single race in dual competition—the 50 freestyle against Brown and Penn, in which he finished second.

Along the way, Farris quickly grew into a consistently strong performer for Harvard and one of the top swimmers in the Ancient Eight. The first-year cemented his place among the Crimson’s most reliable athletes with 12 individual victories in dual meets, including five first-place finishes each in the 100 and 200 freestyle events.

Farris also secured a spot as an essential member of Harvard’s relay unit, which did not lose a single race in the regular season. The rookie played a vital part in that success, regularly competing in the Crimson’s top lineups for the 200 and 400 freestyle relays and as the anchor for the 400 medley relay squad, which beat out top programs like BYU and perennial rival Yale.

Led by its standout freshman, Harvard cruised to its third undefeated dual season in four years. The team also won the regular season Ivy League title and cracked the top-25 in the national rankings.

"He elevated the level of everyone around him, and I think that's what made him the ultimate teammate," junior Koya Osada said.

Throughout the successful campaign, in which he played a leading role, Farris remained humble and focused on his teammates.

“Dean is the perfect teammate, and I don't say that lightly,” senior Max Yakubovich said. “He cares about how your races went, he doesn't get down on himself after his own sub-par swims, and he always emanates positivity in and out of practice. All he wants is for his teammates to succeed.”

Not only did the freshman value the success of the team as a whole, he actually improved it through his hard work and inherent ability, according to his teammates. For his contributions to the program, Farris was honored with the Iron Man Award, which is presented to the rookie who best embodies the values of the team.

“By watching Dean on a day-to-day basis, we all were able to learn what it takes to prepare your mind and body for peak performances in competition,” Osada said. “He elevated the level of everyone around him and I think that's what made him the ultimate teammate.”

Part of Farris’ positive effect on his teammates stemmed from the fact that he was constantly improving. Though his talent was already well-established when he arrived at Harvard, he worked extremely hard to get faster. This dedication to improvement was reflected in the fact that Farris set a new personal-best time in every event that he raced in during the 2016-17 season.

“Dean's a freak of nature,” Osada said. “He's definitely naturally gifted, but above all, his competitiveness and passion for the sport are what set him apart from the rest. He is never satisfied with his results and he constantly finds areas for improvement. The internal fire that motivates Dean to push himself is unique and brilliant.”

That fire propelled the freshman to his first NCAA championships in March. Competing in the 200 free and 200 backstroke against an extremely experienced field as a first-year, Farris could easily have been intimidated. If he was, though, it didn’t show.

The rookie qualified for the A final of the 200 free and swam to a fourth-place finish behind three Olympians, two of them gold medalists. The result earned Farris first-team All-America honors, making him the first Harvard swimmer to receive the award since 2010.

“I imagine that he definitely felt quite a bit of pressure as a freshman, but he rarely showed it,” Yakubovich said. “The only time I noticed any sort of nervousness with Dean was when he stepped up on the blocks for the 200 free NCAA ‘A’ Final. He was shaking a little bit. But then he drove home like it was nothing and got fourth behind three Olympians. The guy doesn't crack.”

Farris wasn’t done, though. The freshman went on to break the school record in the 200 back prelims before finishing 14th overall and garnering honorable mention All-America recognition. He is the first Crimson swimmer to earn All-America status in two individual events since 2008.

The Atlanta, Ga., native also picked up a third honor, finishing 14th in the 800 freestyle relay, good for another honorable mention All-America award.

Farris’ standout performance at NCAAs was a fitting conclusion to an outstanding debut season in which the first-year established himself as one of the top swimmers not just in the Ivy League, but in the entire country.

If he can continue to show the same improvement that characterized his freshman campaign, there’s no knowing what Farris might accomplish in the years to come.

“Not only did Dean catapult Harvard men's swimming into the national spotlight this year with multiple world-class performances, but he did so with the poise, determination, and leadership of a true champion,” Ronda said. “I am very excited to see what Dean does in the future.”