“Untapped potential.” Not a statement often attributed to a player who leads her team in rebounds and ranks as one of its top scorers and defenders.

“A work in progress.” Not a phrase often attached to an All-Ivy honorable mention and co-captain of the Harvard women’s basketball team.

However, this year’s Female Breakout Athlete of the Year fits these descriptions perfectly. For as impressive as her numbers may be, this athlete stands out for her immense ability and athleticism. She may have experienced a breakout in 2017, but with so much natural talent, the possibilities tantalize.

Destiny Nunley, a senior forward for the Crimson, led the program to a 21-9 record and a third-place finish in the Ancient Eight after an 8-6 conference record. Nunley captained a squad headlined by four underclassmen, two of whom were freshman, to a historic 16-game win streak, the program’s longest since the 2002-2003 season.

Despite such a monumental season, her final one in crimson and white, Nunley’s senior campaign offers a mere glimpse of her skills and leadership abilities.

“She’s as long and athletic as it gets, and she can jump really high and uses her body really well on the court,” co-captain Taylor Finley said. “Those are things that are just natural, raw talent that are amazing for a coach to work with coming into college. Also, she’s a great scorer, too, but I think her defense is what stood out to me compared to other athletes I’ve seen.”

Nunley, a native of North Richland Hills, Texas, was equipped as a freshman with the physical tools to have a huge impact for the Crimson. At 6’1”, she had the length and quickness to have a positive influence on both ends of the floor from multiple positions.

“When I was recruiting her as a high school student-athlete, I was blown away by her potential,” Harvard coach Kathy Delaney-Smith said. “Her athleticism is in the top percentage of athletes that have played here and been successful. She’s an incredible athlete.”

Not only did the forward catch the eyes of fellow recruits and the coaching staff, but also older players saw her potential.

“I think versatility is a trait that she has,” said Shilpa Tummala ’16, a teammate of Nunley’s for three seasons. “Versatility on the defensive end, specifically being able to guard inside [and] outside. She was able to be in the passing lane [and] be a full court on-ball defender. The length really helped her.”

Nunley was no stranger to playing at an elite level before coming to Harvard. As a junior, the Richland High School product led her club team, Cy-Fair, to a Nike Nationals championship, and to a bi-district championship her senior year. Nunley was a three-time all-district selection, was named to the Fort Worth Region Super Team in 2013, and was selected as the 5A District MVP as a senior.

With all the tools and experience to match, Nunley was poised to have a similarly decorated collegiate career. But to the frustration of Nunley and disappointment of her teammates and coaches, injuries plagued her early years in Cambridge.

The All-Ivy pick did not have the smooth transition to the college level that many had hoped. As a freshman, Nunley suffered an injury that sidelined her before the beginning of play. The effects weighed heavily on the young player.

“She unfortunately had surgery before coming to Harvard, and she almost decided to stop playing basketball,” Delaney-Smith said. “And then she sort of changed her mind and struggled for two years with the knee and plaguing injuries. She never really played for two years.

Nunley saw limited action as a sophomore. Despite playing in 27 contests, she averaged only 2.6 points, 2.1 rebounds, and 14 minutes per game.

“She sort of was on an offensive roller coaster regarding her ability to put the ball in the net,” Delaney-Smith said. “Which was an irony because she put in a lot of time. She worked really hard, but then she got into her own head”

The Texan entered her junior campaign with playing experience under her belt and a productive offseason behind her. She began to settle into Delaney-Smith’s system and to find her groove.

Although averaging 6.6 points per game to go along with five rebounds per contest is not a stat line that jumps off the page, the intangible lessons learned during a season that saw the Crimson go 9-5 in conference play would lead Nunley to her breakout performance the next year.

“Her [work ethic] was a work in progress, to be honest,” Delaney-Smith said. “She was able to make a turnaround after her sophomore year. What a waste of talent if you don’t have the work ethic to match it, so I think she turned it on.” 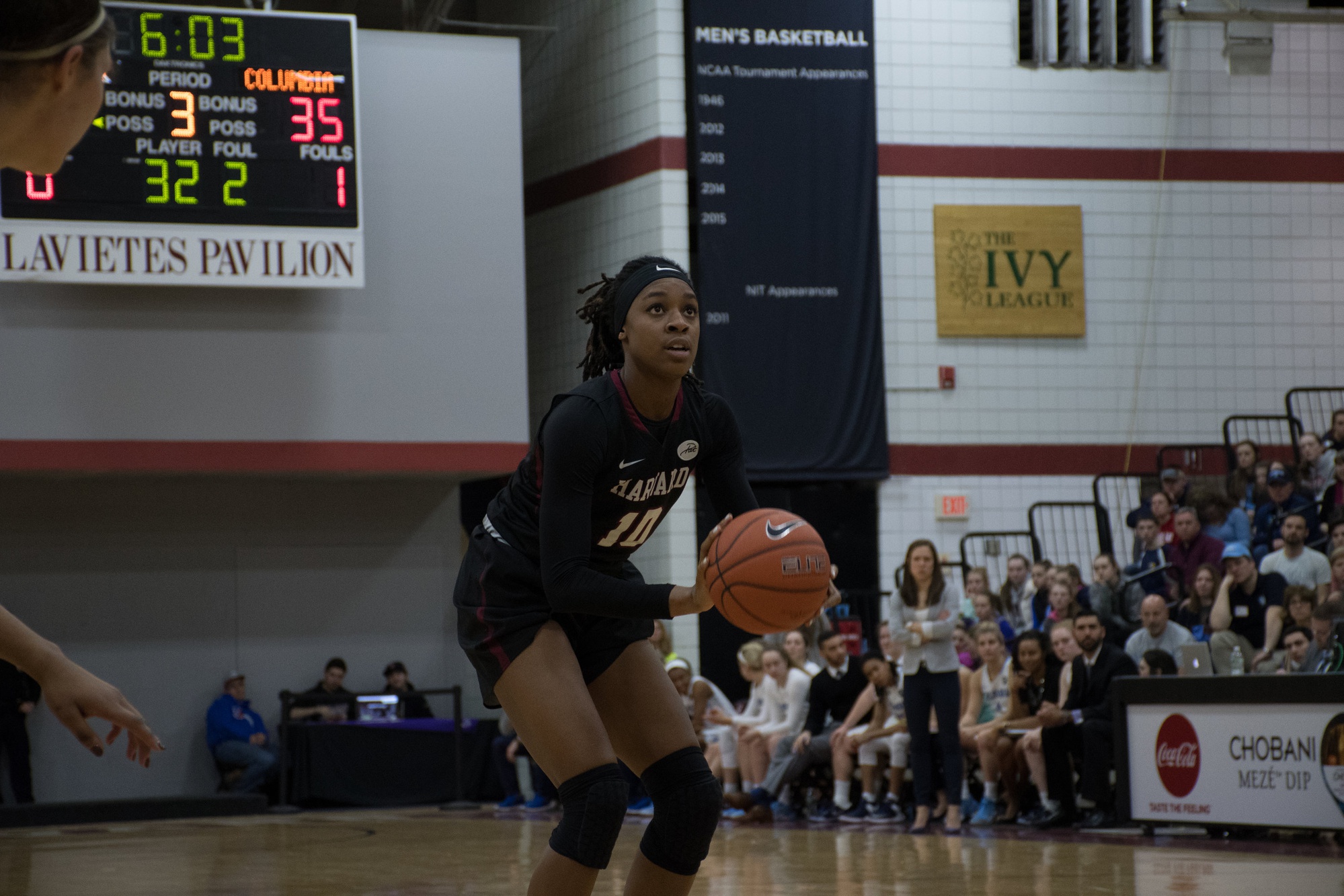 Co-captain Destiny Nunley, who will join Georgetown next year, battled through injuries during her first two years before leading Harvard to the Women’s National Invitational Tournament in 2017. By Megan M. Ross

After her junior year, Nunley was named co-captain with teammate Finley, and the challenge of winning an Ivy League championship with a young and inexperienced squad fell on their shoulders. Finley, much like Nunley, suffered injuries in her career, and she was sidelined her for the majority of her senior season.

As a result, Nunley had to lead the team on the floor, a task that she grew into.

“With Destiny, I think it was amazing being her co-captain, and we worked well together,” Finley said. “I think she grew a lot as a leader. I don’t think anyone’s ready to have that title or that position coming into it, but I think she definitely grew a lot. And being a vocal leader wasn’t necessarily her strong suit, but it was an area that she definitely grew [into].”

After a 103-87 loss to Minnesota in the first game of the season, the Crimson, led by the senior forward, went on 16-game win streak, a feat not many would have predicted for the team. Nunley went on to average 11 points and 7.1 rebounds per contest while commanding the squad. Harvard went 13-3 in nonconference play, took home the Fordham Holiday Classic, and made it to the second round of the women’s National Invitational Tournament to close out its season.

Although Harvard had an average Ancient Eight mark, Nunley’s leadership and guidance set the Crimson on a path of future success.

“I think they appreciated her honesty and her accountability. When she made a mistake regarding being a leader, she stepped up, and she worked at it,” Delaney-Smith said. “I thought she worked endlessly at trying to be a leader for the team, and that was great.”

Following her breakout year, Nunley earned a lot of interest for her final season of eligibility and made the decision to join the Georgetown women’s team next year.

“Obviously [Nunley is] one of the most fun people to play with,” Finley said. “You definitely want to have her on your team because she’s an unbelievable defender and not a lot of people in basketball like to defend. It’s hard for people to shoot over her. Whether that’s blocking shots or having your back when you get beat on defense, she has your back and is a great player to play with.”

As the Hoyas experience coaching changes, a few questions linger about the direction of the Big East program. But one thing is for certain: Nunley’s ability, perseverance, and drive will make her an asset to whoever takes the reigns next. That coach will be the beneficiary of an athlete who has only begun to hit her stride.

—Staff writer Stuart Johnson can be reached at stuart.johnson@thecrimson.com.