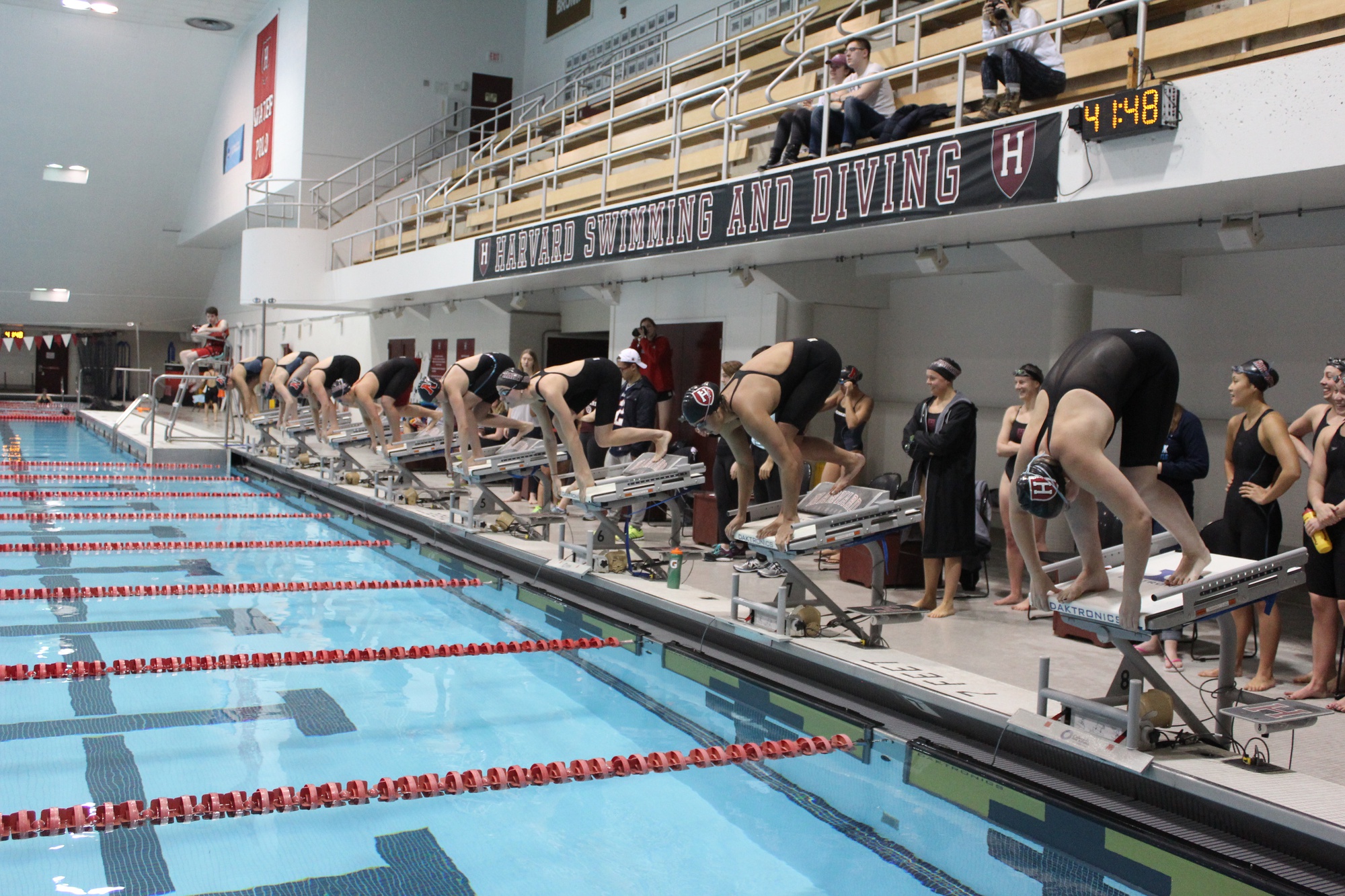 A Backbreaking Win: Female Comeback Athlete of the Year

Swimmers take their marks against Northeastern on Feb. 5. By Tiana A Abdulmassih
After a promising freshman campaign, sophomore swimmer Sonia Wang battled injuries throughout most of 2017. However, when an Ivy League championship was on the line, Wang came to play.
By Leena Ambady

When sophomore Sonia Wang dove into the pool for the 400-yard individual medley at this year’s Ivy League Swimming and Diving Championships, Harvard coach Stephanie Morawski expected no more than a few points from her performance. The goal was simply to move the Crimson up a place or two on the scoreboard.

Instead, Wang delivered a first-place finish, breaking the previous record at Brown’s Katherine Moran Coleman Aquatic Center, while catapulting Harvard to a second place finish overall. And she did it all with a broken back.

“She swam on heart alone,” Morawski said. “She swam for the team.”

Coming off a remarkable freshman year complete with two victories at the Ivy League Championships, All-Ivy honors, a trip to NCAA Championships, and several broken school records, Wang was sidelined for the majority of her second collegiate season. A stress fracture in the lower sacral region of her back kept her out of the pool and in doctor’s offices and waiting rooms as she visited specialist after specialist in hopes of finding a quick route to recovery.

But frustratingly, there was no easy fix for her back pain. Wang was forced to shift her focus from earning a spot on the winner’s podium to simply returning to the starting blocks.

“Last year, Sonia’s role was someone who would get in and win events for us whenever we needed it most,” Morawski said. “It’s very hard to switch from that role to a more diminished role, where it’s not about you winning anymore.”

Over winter break, Wang and Morawski decided that it would be best for the sophomore standout to train through the pain, as she wished to contribute something to her team, even it was only consolation points.

That’s how the Upland, Calif., native ended up diving into the pool on the morning of Feb. 17, participating in the preliminaries for the 400 individual medley, a race that’d she won at the Ivy League Championships a year before. Wang swam cautiously in the preliminaries, managing to sneak into the top eight and qualify for the finals.

Yet the minute Wang came off the blocks, she led the pack of swimmers, touching first at the end of the freestyle leg. Her pace had increased from the morning’s preliminaries, with faster tempo and arm speed.

"She swam on heart alone. She swam for the team," Harvard coach Stephanie Morawski said.

By the breaststroke leg, Wang had a clear lead and seemed poised to defend her title in her first meet of the season.

“When she was still leading with one lap to go, I knew that she was going to win,” Morawski said. “There is no way that Sonia Wang was going to let anyone pass her on the freestyle leg of the race. No way.”

Morawski’s faith in her swimmer was not misplaced, as Wang touched the wall for a time of 4:14.21, almost four seconds faster than her performance in the preliminaries. It was good enough to top Yale sophomore Destiny Nelson, who finished just a second later. Wang’s performance stunned coaches and teammates alike.

“It was a beautiful race by her, and watching it was amazing,” co-captain Summer Schmitt said. “Just watching her race was kind of unreal.”

Wang’s dominant return to the pool did not end with the 400 IM, as she earned third place finishes in both the 200-yard individual medley and the 200-yard butterfly. Her unlikely victories motivated her teammates, whose performances earned them a silver medal behind the Bulldogs.

“All of the women swam well and swam for the team.” Schmitt said. “We were all doing it for each other—that’s the mentality that we wanted to go into each race with, and it was most clear in Sonia’s race.”

Since the Ivy Championships, however, Wang has still been plagued by her stress fracture, and will rest her back according to doctor’s instructions this summer. As incredible as it was, she hopes not to have to repeat her broken-backed victory but rather return to the pool next semester at full strength. Whatever the recovery process, Wang’s improbable comeback serves as a testament to her determination to overcome any obstacle in her path.

But for Morawski, even more impressive than Wang’s resilience and fight is her selflessness and team spirit.

—Staff writer Leena Ambady can be reached at leena.ambady@thecrimson.com.