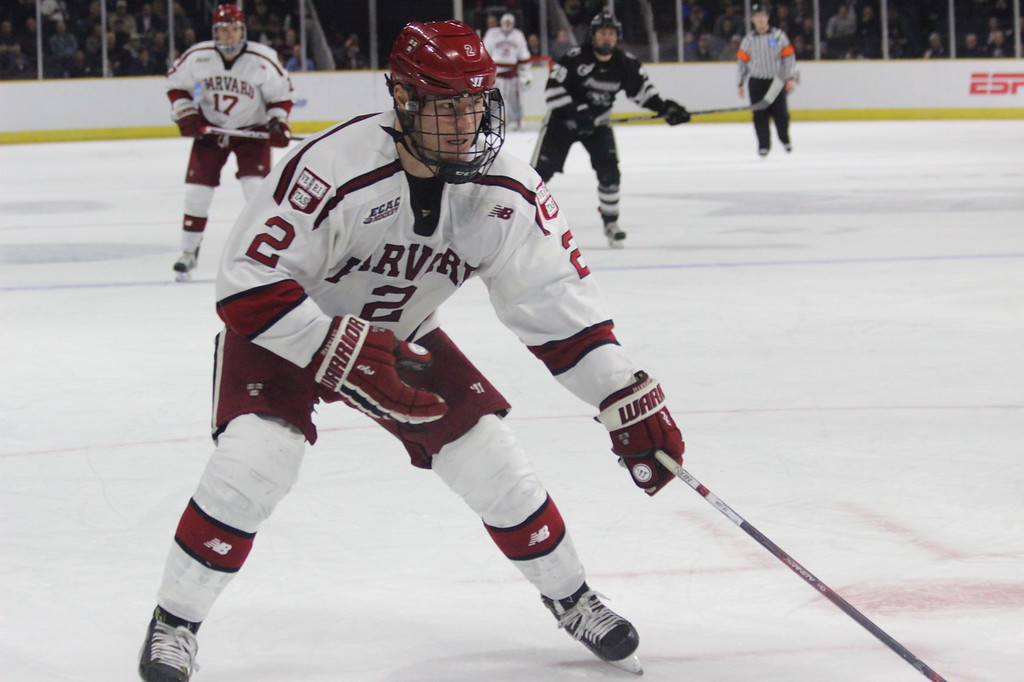 Moy Oh My: Male Breakout Athlete of the Year, Runner-Up

The 2016-2017 campaign was essentially a breakout season for the entire Harvard men’s ice hockey team. The group soared to new heights, hogging almost all the available accolades. After a Beanpot victory, an Ivy League title, and the ECAC crown in both the regular season and the playoffs, the Crimson emerged from the NCAA Tournament’s East Regional before bowing out in the Frozen Four semifinals.

All along, Harvard coach Ted Donato ’91 knew that in order for his team to achieve this level of success, individual players would need to elevate their games.

“[Next year] we’ll have to have some guys have breakthrough seasons up front, which sounds kind of similar to what we were saying last year,” said Donato, reflecting on the Crimson’s historic 2016-2017 season. “I think the one part that sometimes gets missed is the improvement that guys make—are they ready for that next step?”

Clearly, Harvard’s players, particularly its rising seniors, were indeed ready for that next step. And no skater took a larger leap than Tyler Moy.

“I think guys like Tyler Moy…just dedicated themselves on and off the ice to getting better,” Donato lauded. “And you saw the rate of improvement. They had good junior years and breakthrough senior years.” 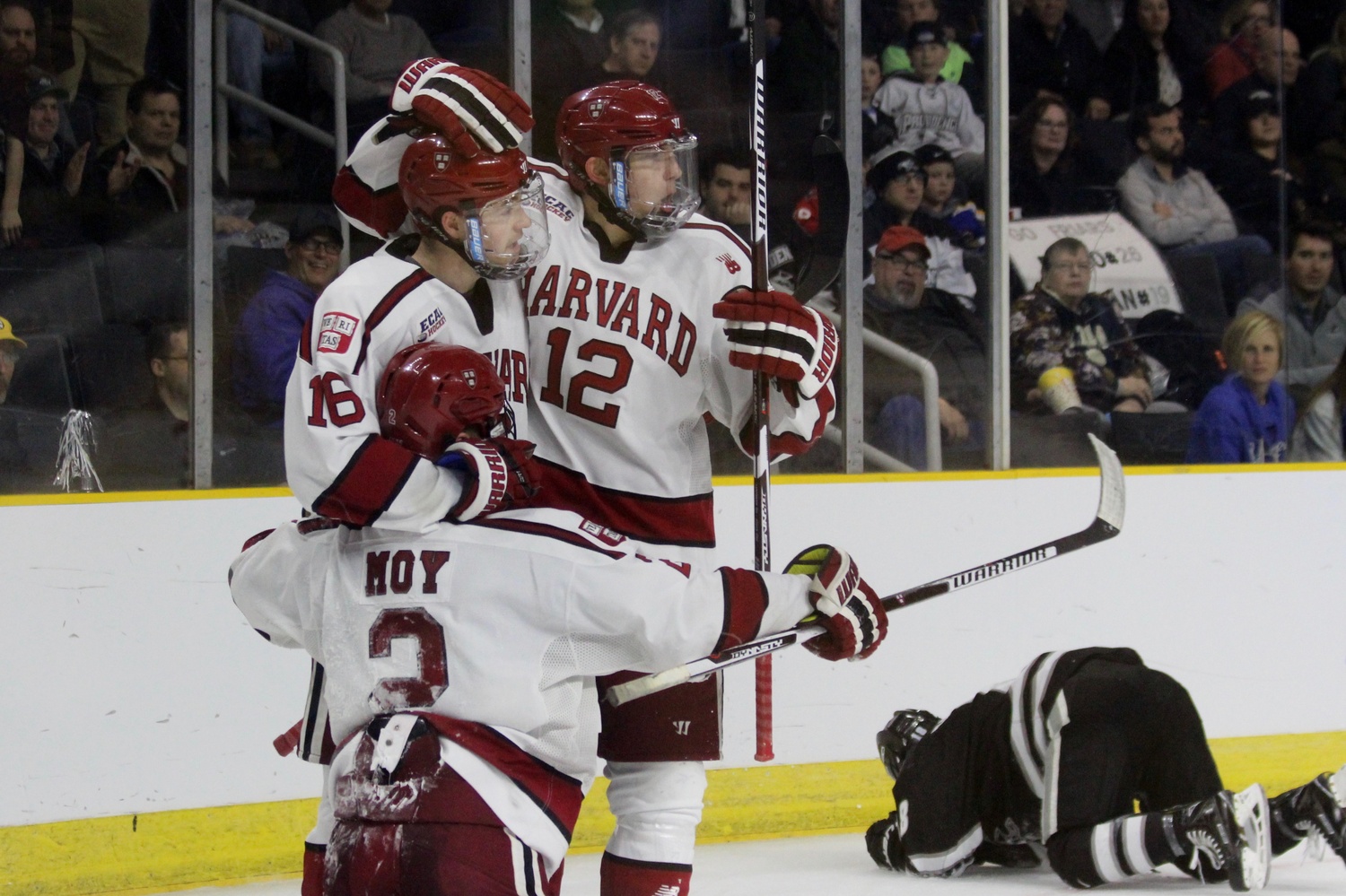 Tyler Moy celebrate's Harvard's third and final goal against Providence with teammates Ryan Donato, and John Marino. With the point, the Crimson advanced to a second NCAA tournament game for the first time in 23 years. By Thomas W. Franck

In 31 appearances in 2015-2016, Moy logged seven goals and 12 assists, and his 19 points were tied for sixth-best on the Jimmy Vesey-led Crimson squad. Flash-forward to this season, and the San Diego, Calif., native sat atop his team’s scoring ranks, tied with co-captain Alexander Kerfoot at 45 points. Moy’s 22 goals, including 10 on the power play and five of the game-winning variety, also led the team.

"In the locker room, we didn't really have a shred of doubt that we [had] the firepower to be able to make it very far," said Moy about this season's Harvard team prior to the Frozen Four. "People doubting us and saying that we're not supposed to be as good anymore when we lost Jimmy [Vesey '16], Crisco [Kyle Criscuolo '16], Blackie [Colin Blackwell '16].... I think we've kind of taken that personally and come back to prove a statement."

Motivated by such feelings, Moy stepped up his game this winter. The NCAA All-East Region selection saw his production jump by a staggering 26 points, the greatest year-to-year point differential on the Crimson roster.

This spike accounted for almost a quarter of the 193 points tallied by Harvard seniors. No NCAA program boasted as high-scoring a cohort of fourth-years.

Moy rounded out one of the most dominant forward lines in all of college hockey. The trio of Sean Malone, Luke Esposito, and Moy—all seniors—tallied the most points of any line that Donato put on the ice this year.

“The amount of chemistry we were able to have on that line was something I’ll never forget,” Moy said. “It was a great send-off to have my last year have that much success.”

Contributing to such a high-powered line, Moy always seemed to have an impact on the Crimson’s most important games. The Nashville Predators’ prospect found the score sheet against ranked opponents Boston College, Boston University (twice), Quinnipiac (twice), St. Lawrence, and Union (twice), while notching 11 points in Harvard’s seven playoff games, split between the ECAC and NCAA brackets.

“There’s a lot of guys who work really hard on this team, but I don’t think anyone works harder than [Moy],” said Kerfoot in mid-February after a 6-0 victory over Brown. “I think the improvement in his game over four years has been incredible. He’s a force to play against down low and off the rush; he’s got a ton of skill. He’s been unreal for us this season, and he’s going to continue to be like that down the stretch.”

Moy’s work ethic propelled his game to a new echelon this year—one defined by consistency and reliability. In his junior season, Moy was a relatively streaky scorer, with clusters of points breaking long dry spells. When his stick was hot, it was deadly, but otherwise, Moy stayed quiet. Of the Crimson’s 11 losses that year, the San Diego native was held pointless in eight.

As a more complete senior, working harder than ever in his final opportunity to take his team to the promised land, Moy flipped the script. After opening the campaign with 12 points over an eight-game stretch, the winger never went more than two contests without inking the score sheet. In his final collegiate season, Moy scored a point in over three-quarters of Harvard’s games, including the team’s only goal in its Frozen Four loss to Minnesota-Duluth.

"There's a lot of guys who work really hard on this team, but I don't think anyone works harder than [Moy]," co-captain Alexander Kerfoot said.

Moy’s breakout year crystallized his future in professional hockey. Just four days after the Crimson’s season concluded, the Predators announced the signing of Moy, their sixth-round pick in 2015, to an entry-level deal.

Moy promptly joined the Milwaukee Admirals, Nashville’s American Hockey League affiliate, and played three games at the end of their regular season as well as two Calder Cup playoff games. In his first taste of professional hockey, he added four points in the three regular season contests. He found the net for his first career goal against the Grand Rapids Griffins, the current allegiance of Criscuolo, former captain of the Harvard program.

“Obviously it’s a pretty exciting time and something you dream about as a kid,” said Moy about his future in professional hockey. “It’s tough to end the collegiate season and career on that [Frozen Four loss], but I couldn’t be more excited to be here in Milwaukee and try to help out the Admirals in any way I can…. It’s a really great opportunity for me, and I couldn’t be more thankful for it.”