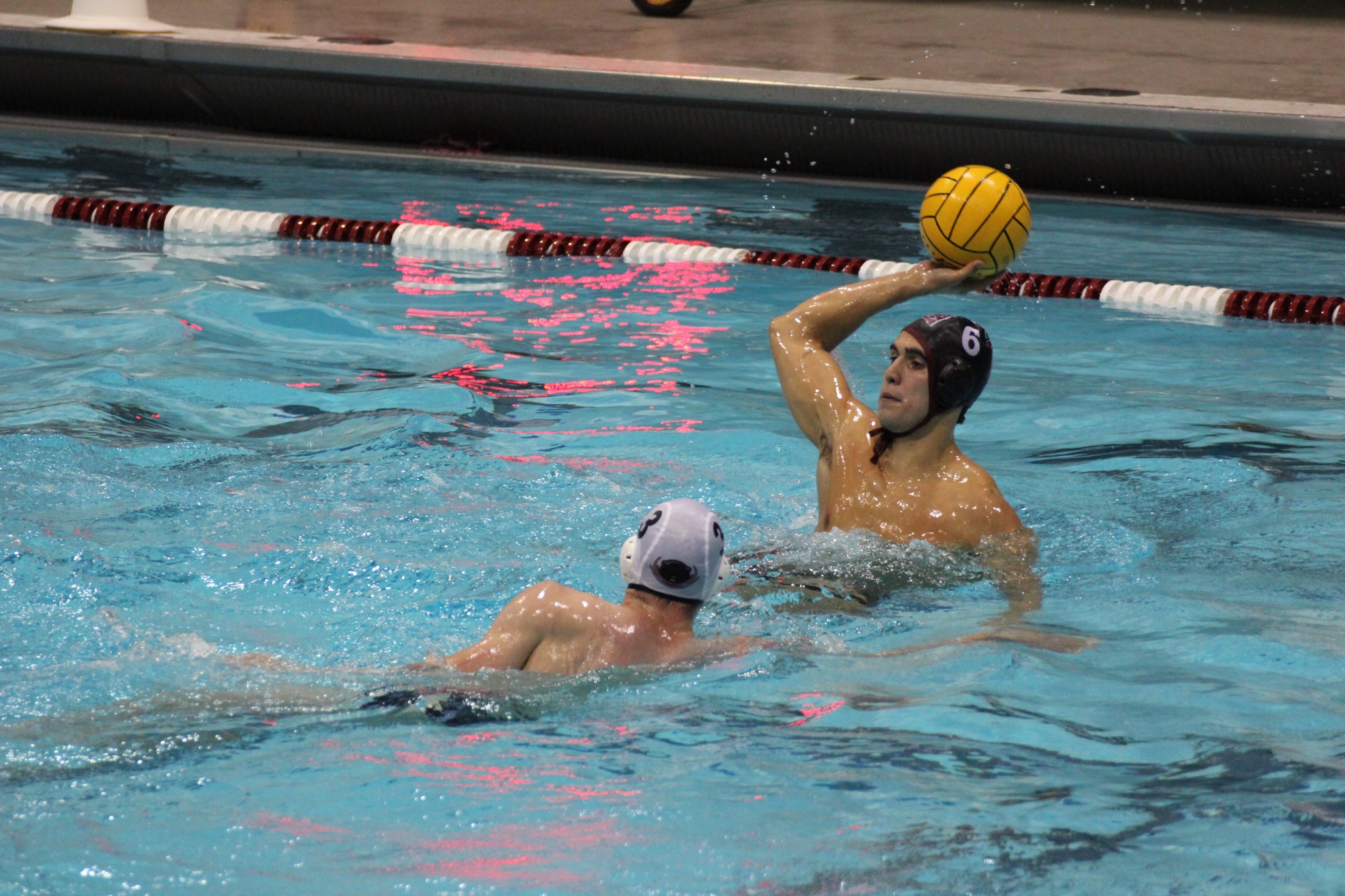 Sophomore attacker Grayson Judge winds up for a throw in an October match against MIT. By Margaret F. Ross
Led by coach Ted Minnis and fifth-year star Noah Harrison, Harvard men's water polo made its first-ever trip to the Final Four.
By Ginny Miller

Entering the 2016 season, Harvard men’s water polo had its sights firmly set on a long-held goal—to win the Northeast Water Polo Conference for the first time in program history.

The Crimson achieved that goal, but didn’t stop there. Coach Ted Minnis’ squad kept winning, in unexpected fashion, all the way to the Final Four of the NCAA tournament.

“I think the team was a much more cohesive unit,” junior co-captain Harry Tafur said. “We focused less on our individual stats and focused more on the team goals and winning and losing as a team. You could feel that from the spring when we were training off season last year, and it carried over into the summer and into the fall. Everyone was not only training and working for themselves but also putting an emphasis on the whole team side of things.”

The Crimson headed into the NWPC tournament with a winning mentality.

In regular season play, Harvard had split its matchups with both Brown and Princeton, perennial East Coast water polo powerhouses. Behind a hat trick from junior Colin Chiapello and two late goals from captain Joey Colton, the Crimson edged out the Tigers by one goal with a 14-13 finish in the semifinal match.

In the championship game against the Bears, Harvard jumped out to a 3-0 lead and never looked back. With a hat trick from junior Harry Tafur and some stifling defense, the Crimson came away with an 11-7 win. The victory gave Harvard the NWPC championship and also clinched one of the coveted seven spots in the NCAA tournament.

The journey to the Final Four ran through two high-pressure, overtime play-in games.

The Crimson earned its first ever NCAA championship win in program history against Bucknell in a 13-12 thriller. After trading leads throughout the course of the matchup, the Bison tied up the game 10-10 with only 19 seconds left on the clock.

Bucknell then headed into the second period of overtime with a 12-11 advantage, but a late goal from freshman Austin Sechrest off the assist from Colton put Harvard on the board to force a sudden-death overtime. With the defense tight, sophomore Anthony Ridgley found Tafur flying down the pool to win the game and end what was, without a doubt, the most exciting game of the season.

The Crimson improved its record to 26-6, the best in program history.

"Everyone was not only training and working for themselves but also putting an emphasis on the whole team side of things," junior co-captain Harry Tafur said.

In the midst of reading period, the team traveled to Berkeley, Calif., to play University of California, Davis, for a chance at the Final Four. Eleven of the 16 players on Harvard’s roster are California products, so the playoff game was essentially a homecoming.

“Not only is most of our team from California, but [also] most of our alumni still live out there and have family out there. It was great to see current players’ families, old players, their families, families that support our program,” Tafur said. “They all came out to Berkeley and watched a ton of our games. It was awesome to see just how influential the Crimson water polo has been to so many people throughout time and how it has impacted their lives.”

Again, Harvard knew a win against UC Davis was within reach, having split two games against the Aggies in regular season play and falling by just a single goal the last time out.

A close round of regulation play ended with a late goal UC Davis that tied the score at 14-14, forcing yet another overtime game. In the first part of this extra period, senior Viktor Wrobel found the back of the net to give the Crimson the early 15-14 advantage. In the second period, with 55 seconds left, Sechrest scored to provide Harvard a two-goal cushion and secure the Crimson’s victory.

Ultimately, Harvard defeated the Aggies, 16-15, to earned a spot in the Final Four, rewriting history once again.

Although the season ended with a 19-4 loss to the University of Southern California, the Crimson had already reached new heights. Thanks to the historic run, Harvard has put its name at the top of East Coast water polo.

“It was just about enjoying it, enjoying the moment, and continuing to write the story that we were having for that season,” Minnis said. “I think once we kind of sat back and enjoyed it and the pressure was off for winning the [conference] championship, we just started playing really well and continued to play really well."

—Staff writer Ginny Miller can be reached at ginny.miller@thecrimson.com.