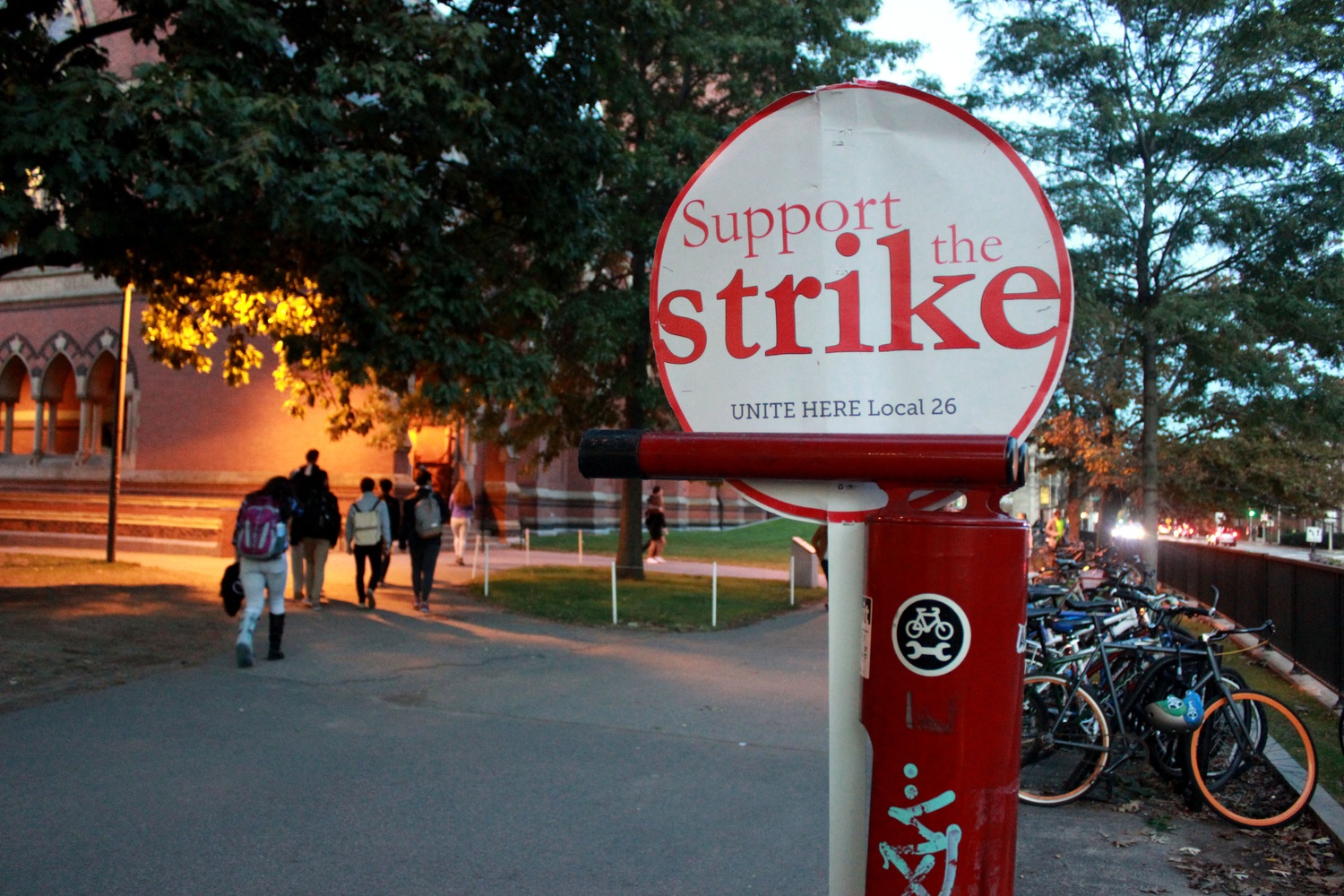 Nearly a year ago, Harvard’s dining workers traded in their serving utensils for picket signs in a 22-day strike that handicapped the University’s food-service operation.

Now, as the anniversary of that strike looms in October, the union that represents Harvard’s dining workers is mounting for a strike at Northeastern University, it also represents approximately 300 workers. As organizing at Northeastern has progressed, the union's success at Harvard has served as an inspiration.

Those workers have been embroiled in contract negotiations with Northeastern’s food vendor, Chartwells, since April. Their contract was set to expire at the end of August, but was extended until the end of September.

In a press release, Tiffany Ten Eyck—the spokesperson for UNITE HERE Local 26, the Boston-based union representing Harvard and Northeastern dining workers—announced the workers will hold a vote to authorize a strike on October 4.

She specifically invoked Harvard’s dining workers strike in the release. It reads, “Inspired by last October’s strike at Harvard University, food service workers at Northeastern University will announce preparations for a potential strike of their own.”

The dining workers at Northeastern, a mid-sized research university not far from Harvard’s campus, “are making the same demands that led to a 22-day strike at Harvard University,” the release reads.

Those demands include an effective $35,000 salary for full-time employees and “affordable” health care. At Harvard, dining workers reached an agreement that covers copayments, and does not feature increases in cost.

Matthew McDonald, a spokesperson for Northeastern, wrote in a statement that the school “looks forward to the union and the employer reaching an amicable agreement.”

For Thomas Gross, a dining worker at Northeastern, the stakes of this round of contract negotiations are high. A Roxbury resident, Gross is the main provider in a large household, and has a seven-year old daughter whose safety he fears for in Roxbury.

“There’s a lot of violence in Roxbury. I have a seven year old daughter. It’s hard to take her to the park. $35,000 a year will be good leverage for me to move to a better environment,” he said.

Gross currently makes $15 per hour for a schedule that he says fluctuates weekly. He said he is hoping for a more stable routine and a higher salary so he and his family can move to a different neighborhood.

Shante McCorvey, another Northeastern worker, said she cannot afford academic programs for her 11-year-old daughter, who shares a room with her two sisters.

“We live in low-income housing and every day is a struggle,” McCorvey said.

At an event Wednesday afternoon, the workers formally announced strike preparations and unveiled a 30-foot-long mural emblazoned with the photographs of hundreds of workers who have already committed to striking if they cannot reach an accord with Chartwells. If the vote swings in favor of a strike, the union’s bargaining committee will be able to call one to order at any point.

If the Northeastern dining workers do go on strike, they may borrow tactics Local 26 employed during Harvard’s strike. Large rallies, food strikes, and coalition-building across several campuses and Boston unions might punctuate an organized labor action that could stretch on for nearly a month, barring an immediate solution.

Gross said the workers at Northeastern have been motivated by the Harvard strike.

“It was inspirational seeing all the workers united there,” Gross said. “We deserve better, and we’re going to do anything and everything to get it.”