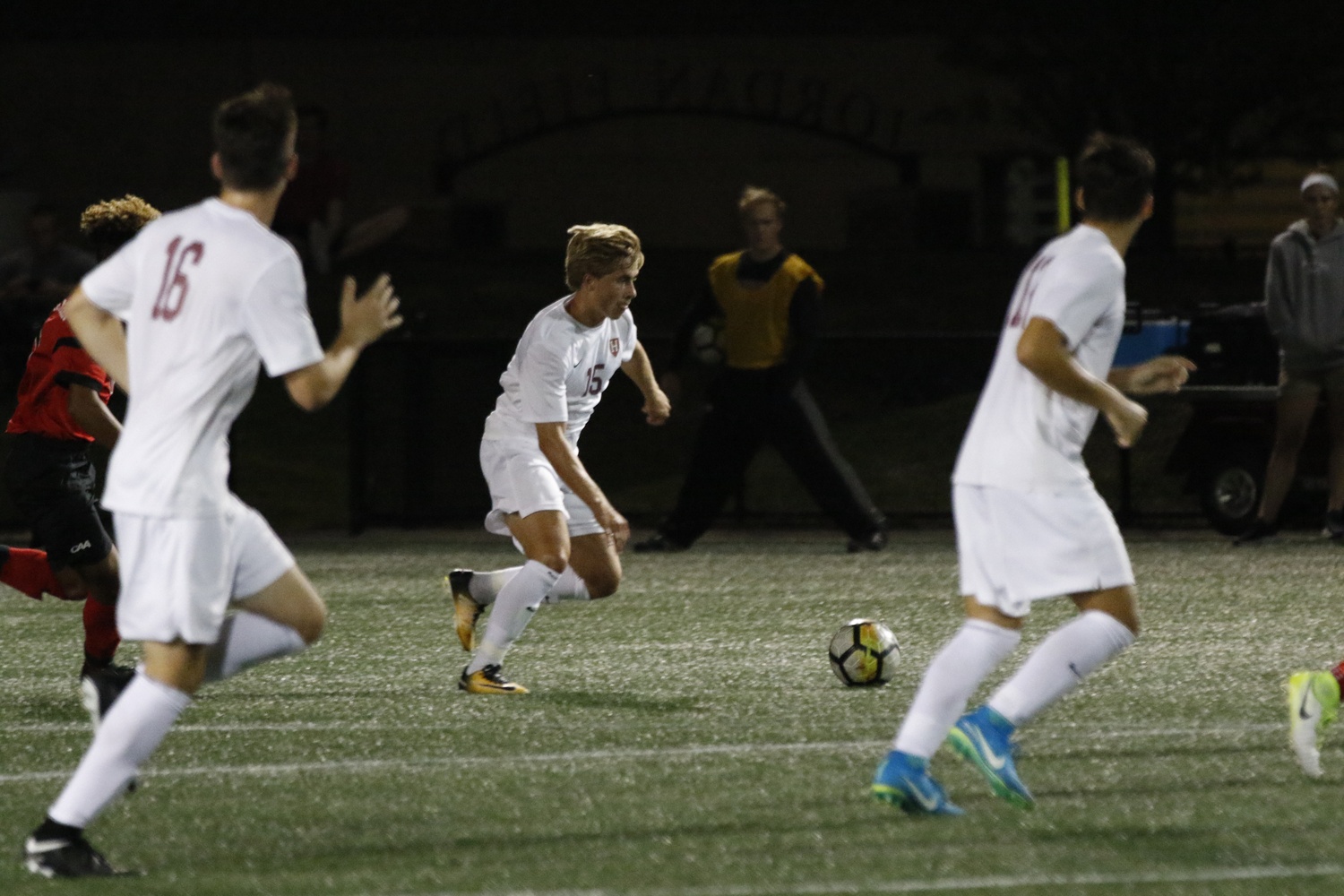 Freshman midfielder Cornelius Bencsik carries the offense forward in a transition toward the opposing goal. Harvard was forced to play mostly defense, quadrupling the number of saves made its opponent. By Timothy R. O'Meara
By Katherine H. Scott, Crimson Staff Writer

Despite a strong showing at Jordan field, the Harvard men’s soccer team (1-5-1) fell to Vermont (5-4) in its last home game before the start of conference play. Finding the net on both a penalty and corner kick, the Catamounts exploited set pieces to down the Crimson on their turf.

“It’s hard to look at the scoreline and just think it’s a bad loss,” sophomore midfielder Matthew Glass said. “I think we did well. We obviously got unlucky with the red card in the second half and the PK came with that.”

This was the first meeting between the two teams since 2011, and the second ever. The Crimson offense was aggressive from the start, earning a corner kick within the first three minutes. Though the team was unable to capitalize on the set piece, the strong start indicated an offensive heavy night for Harvard and that there would be several more shots at the goal throughout the game.

However, Vermont came into the match prepared and countered. Half a minute after freshman midfielder Cornelius Bencsik’s corner kick, the Catamounts’ first attempt at the goal was deflected by Crimson senior goalie Kyle Parks.

For the rest of the half, Vermont and Harvard traded shots and fouls, with Vermont’s offense recording a couple more shots than its opponent. The Catamounts made some good attempts at the goal against a Crimson defense that had, over the past few games, been extremely stout. Despite the bevy of attacks, Harvard’s back line, led by Parks’ four saves, kept Vermont off the scoreboard.

Going into the second half, Harvard made a change in the back line, giving freshman goalie Matt Freese some playing time between the posts. Freese was immediately tested by Vermont, and made three saves in his first ten minutes. His time in goal was cut short, though, after a foul resulted in him being sent off in the 55th minute. Vermont scored on the resulting penalty kick, putting it up 1-0.

“The way the guys on the field responded to the goals scored against us improved a lot from the last game,” said co-captain and defender Eric Gylling.

The Crimson bounced back, and remained strong in defense and offense. Though it did not manage to find opportunities to attack, the defense was a wall. The times that the Catamounts did find shots on the goal, they were blocked or saved.

Fifteen minutes after the penalty kick, Vermont worked its way near Harvard’s goal again. A deflected shot on goal earned the visiting team a corner kick. Despite the early success in defending the Catamounts’ early set plays, Harvard’s defense faltered. The highflying ball found Vermont’s Ivar Orn Amason, who placed it in the far corner of the net.

“I think a lot of the goals we’ve been giving up are pretty fixable, but we just need to keep going out and fix those things, and get ready for the next game,” Glass said.

With nearly twenty minutes left to play, there was still time left for Harvard to mount a comeback, which it immediately set out to do. Farias and sophomore defender Gavin Baker-Greene took shots on goal three minutes after Vermont’s shot, but both attempts were blocked. The Crimson’s increased pressure kept them in Vermont’s half, and freshman midfielder and forward Paolo Belloni-Urso and Lindner-Liaw made the final attempts at getting on the scoreboard.

Though it was not the result that the team wanted, Harvard had a strong performance—something that the team can carry with it going into the second half of the season.

“We’re definitely going to work on defensive set pieces, we’ve been working on them a lot,” Glass said. “And definitely being positive, especially going into the Ivy League.”

“We're taking one thing at a time going into Ivy play, and the overall attitude we’re looking to bring is calm, relaxed, and sharp,” Gylling added. “Number one thing for us is to stay together and support each other through tough times, and keep grinding onto the next chance we get.”