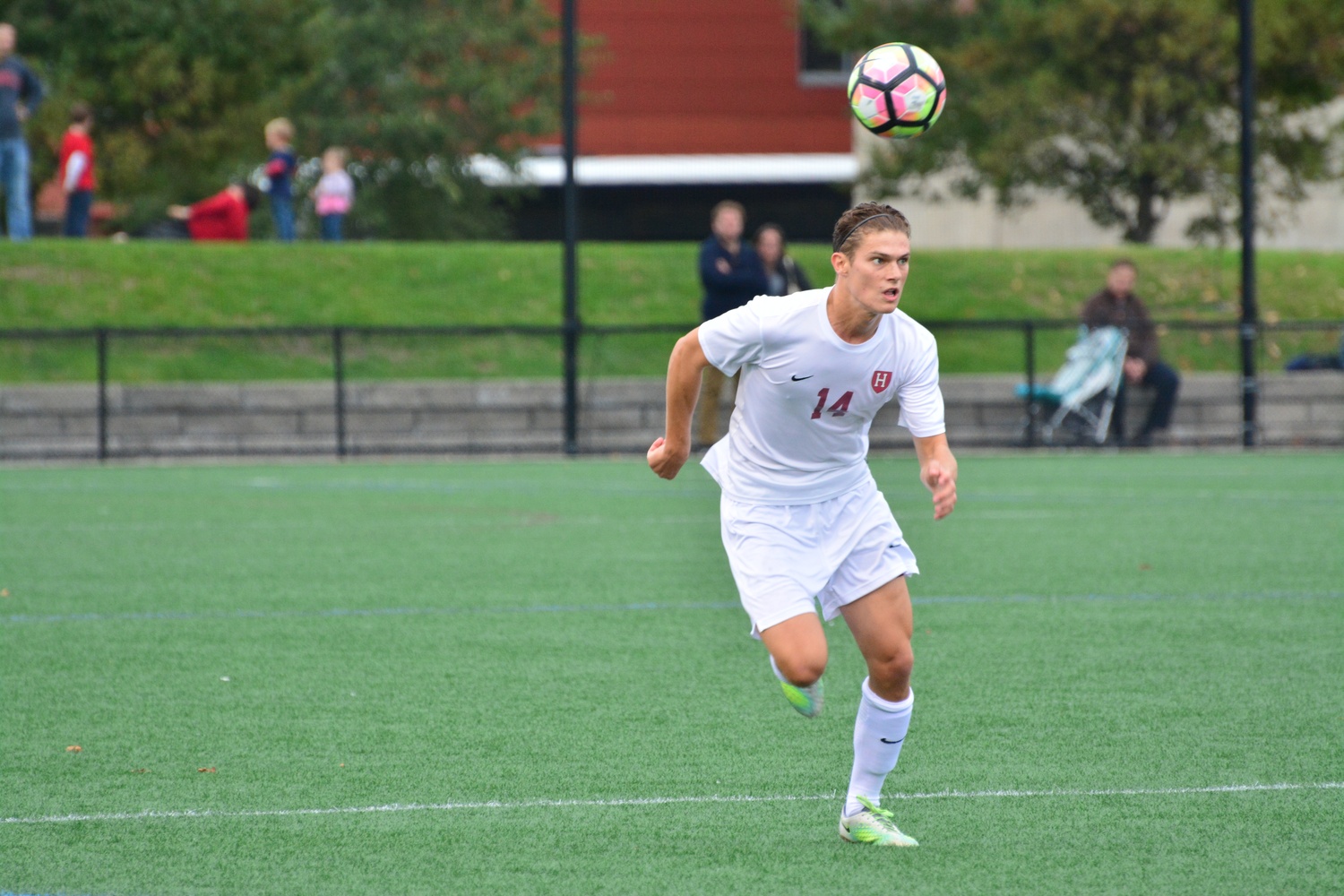 Co-captain Justin Crichlow hustles after a ball. The defender led his team into battle twice this weekend, against Xavier and UMass Lowell. By Charles K. Michael
By Katherine H. Scott, Crimson Staff Writer

Not only does the Crimson return most of its leading scorers, but also the team has added six new freshmen. Throw in extended rest time before the start of competition, and Harvard seems poised for a dominant opening.

What will become of the season remains to be seen, but for now it appears that the Crimson is still trying to find cohesion amongst individual talent. This difficulty in finding tempo resulted in a slow start this weekend, as Harvard dropped its first home and road matchups.

With one game and numerous practices under its belt, the Crimson had a reason for optimism heading into its second non-conference game of the season against UMass Lowell (3-0, 0-0 America East) on Monday. Any hopes fell flat, however, as the River Hawks cruised to a two-goal win.

Although Harvard didn’t score in the first half, the team put up a physical defensive effort, picking up several fouls as a result.

UMass broke the stalemate in the 52nd minute, with defender Chase Reichenberg catching the Crimson by surprise with a quick rebound. He scored after senior goalie Kyle Parks had saved a shot just seconds previously.

For the next 10 minutes, the Crimson stepped up the pressure and found itself in the attacking third often. While the team had two successive corner kicks, neither effort found the back of the net.

The River Hawks were quick to mount a counterattack after the second Crimson corner kick. Midfielder Dario Jovanovski scored off a through ball from the left side to put up UMass, 2-0.

Harvard quickly went back to work after conceding Jovanovski’s goal. Sophomores Taner Dogan and Matthew Glass gave the offense new life with creative play in the midfield. This offense was not enough, though, to put a point on the scoreboard. Nor could the players prevent UMass from scoring again in the 90th minute.

For the second game in a row, Parks recorded six saves. While the offense was stronger, it still was out shot by the River Hawks 12-6, with only one of its six shots on target.

“I think there were a lot of things that were just off here and there, and it added up to not a great rhythm for the group,” head coach Pieter Lehrer said. “In training, it’s really intense, and it’s sharp. I think it’ll come. We’ve got to maintain the lack of frustration and keep going.”

Three days earlier, Crimson found itself struggling with both first-game jitters and finding a rhythm in a 3-0 loss to Xavier (2-1, 0-0 Big East) at Ohiri field.

The Musketeers dominated from the starting whistle, immediately putting pressure on Harvard. The high pressure paid off, with midfielder Simen Hestnes making a diving header to find the back of the net in the 11th minute.

Ten minutes later, Hestnes and Xavier’s forward Matt Vasquenza struck again, with Vasquenza connecting with his teammate for the second time to extend the Musketeers’ lead to 2-0. The Crimson stepped up its defense for the rest of the half but could not answer with any goals

Harvard regrouped during halftime, and came out stronger in the second half. The team found itself in the attacking third more often but failed to connect passes or capitalize on any opportunities.

Towards the last half-hour, the hosts started to tire. The Musketeers, which had time to get into game shape in their previous two games, took advantage. Forward Samson Sergi buried a ball from 15 yards out to make the score 3-0.

Despite struggles with finding a flow, players performed on an individual level. Parks made six saves for the Crimson, and freshman Paolo Belloni-Urso led the offense with four shots. Co-captain and defender Eric Gylling tallied the other three of Harvard’s total seven shots.