Protesters Call on Harvard to Divest from Puerto Rican Debt 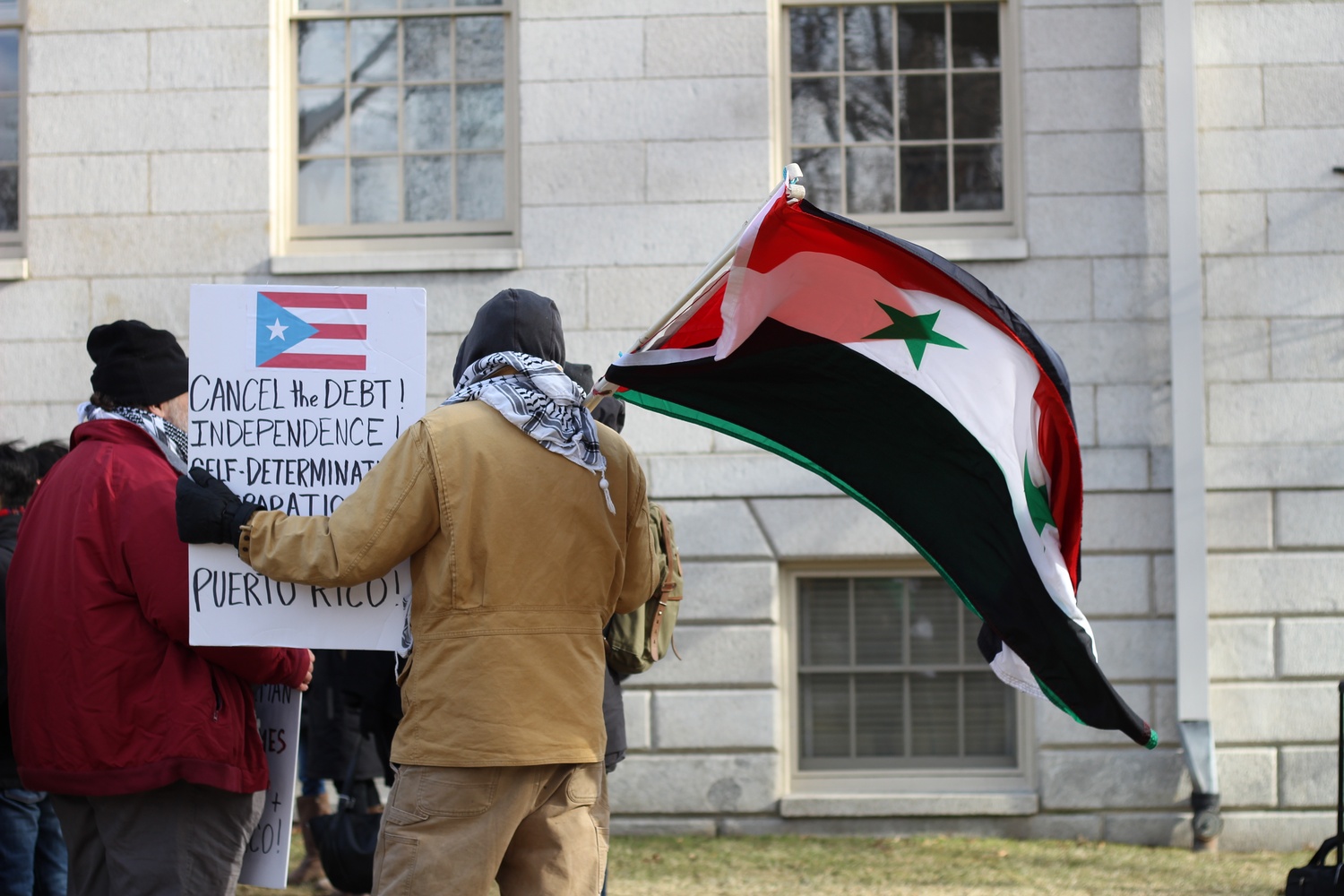 Hundreds of protesters marched across campus Wednesday to urge Harvard to divest from the Boston-based Baupost Group unless the hedge fund cancels its holdings of Puerto Rican debt.

The protest, organized by Harvard affiliates and local activist organizations, ispart of a series of protests calling for higher education institutions to divest from financial groups with significant Puerto Rico debt holdings. Rallies at Yale University, Columbia University, and the University of Phoenix are slated to take place within the next week.

Armed with signs reading “Drop the Debt” and “Harvard Divest from Baupost,” protesters marched through Johnston Gate, walked past the School of Education, and concluded the march at Harvard Business School.

Protesters called for the University to divest $2 billion from Baupost Group, which holds nearly $1 billion of Puerto Rico’s $70 billion debt.

Cassandra Fradera, a graduate of the extension school who spoke at the protest, told the gathered crowd that Harvard needed to divest the University’s endowment in order to “align with its values.”

“We are asking Harvard’s endowment, which has been undergoing changes in the recent years, to divest from Baupost unless it cancels its Puerto Rico holdings,” she said. “We need to restructure this debt to get the release that we need, and we need to start talking about Puerto Rico.”

Last September, Category 5 hurricanes Irma and Maria slammed into Puerto Rico within the span of two weeks, shutting off water and electricity on the island and cutting off students’ hopes of contacting their families.

Klarman previously drew condemnation from protesters at Baupost headquarters in October after he said expunging Puerto Rico’s debt would be “impractical.”

In an emailed statement Wednesday, Klarman reaffirmed his support for Puerto Rico.

“The U.S. government should support the people in Puerto Rico as it does in other disaster relief efforts. In the meantime, Baupost plans to continue to be a constructive partner in seeking a restructuring resolution that results in a fair outcome for all parties, including the people of Puerto Rico,” he wrote. “A full and sustainable financial recovery for Puerto Rico is in the best interest of all constituents, including creditors.”

Apart from denouncing Klarman, protesters on Wednesday demanded that the University halt investments in Baupost.

“We know that Harvard is a large university with a big endowment, and it can set a tone for how higher education universities invest,” protest organizer Julio Lopez Varona said. “It could make investments that are moral and not hurt anybody.”

A spokesperson for Baupost said the group has not purchased more bonds since the hurricanes last September.

In the past, Harvard has been reluctant to change its investment strategy as a result of student activism. In response to calls for the University to divest its fossil fuel holdings in 2013, President Drew G. Faust wrote in an open letter that the University maintains “a strong presumption against divesting investment assets for reasons unrelated to the endowment’s financial strength and its ability to advance our academic goals.”

Since then, student activists have continued to call for permanent divestment from fossil fuels and, more recently, from private prisons.

A previous version of this story indicated that Cassandra Fradera is a former Extension School student. To clarify, she is a graduate of the extension school.