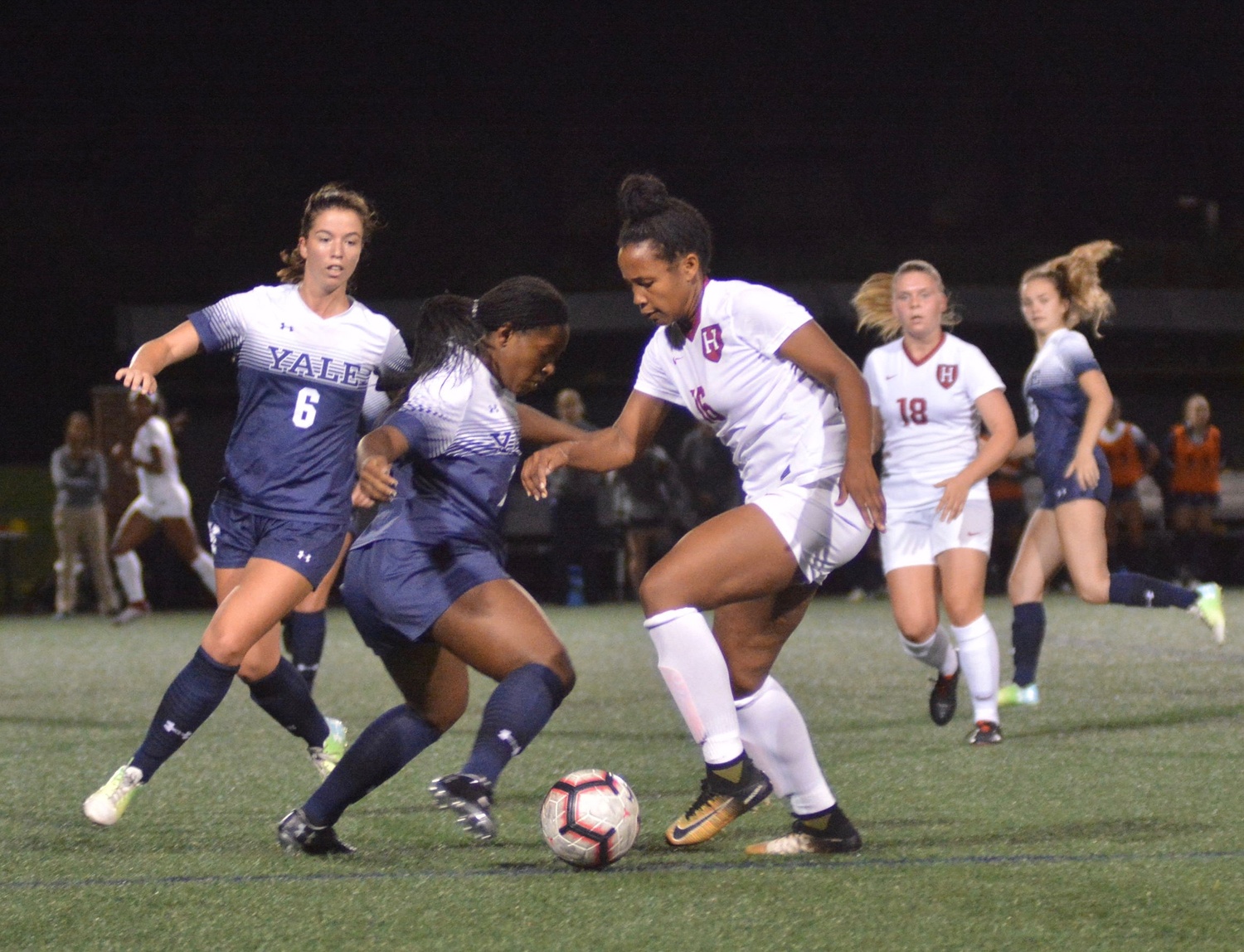 Imagine a slow chess match. Both sides have time to think, to calculate.

Now imagine a third baseman fielding a rocket line drive. There’s no time to calculate — only time for instinct to kick in.

The Harvard women’s soccer team returned home this weekend to take on the Yale Bulldogs in a fast-paced, back-and-forth game decided by which team had the greater killer instinct. A moment’s hesitation on either side of the ball meant a missed opportunity or an allowed goal.

“Yale has a high-powered offense, but we knew that they’d also been susceptible at the back,” head coach Chris Hamblin said. “We knew this was going to be a wide-open game. We said to the team before the game, ‘We have to make sure that we are taking advantage of their backline better than they take advantage of ours.’”

With an incessantly aggressive defense, yet another shutout performance by its goalkeeper, and a first-half game-winner from freshman defender Jillian Wachira, the Crimson demonstrated how effective its hunger to win can be in a 1-0 victory over Yale on Saturday night.

Wachira, a rookie out of Plainsboro, N.J., provided the decisive lift to the Crimson squad with a left-footed strike just inside the box past Yale junior goalie Alyssa Fagel in the 29th minute. The tally, aside from being the game-winner, was also Wachira’s first career goal.

“I just saw the pocket and I went,” Wachira said. “Lara [Schenk] got the ball, I called for it, luckily she played me, and I was like, ‘You know what, I might as well take it.’ I beat the girl and I just shot.”

Freshman midfielder Lara Schenk, previously a member of the German Youth National Team U15-U19, was credited with her first points of the season. Playing her first game in a Harvard jersey, Schenk provided the assist to Wachira from midfield. Wachira gathered the pass, beat the first defender, and rocketed a shot inside the right post with another defender in her face.

“I was afraid it wasn’t going to go in,” Wachira added with a laugh. “But, you know, I took my chance.”

With the scoreline at 1-0, the Crimson kept up its high-energy play to keep the Bulldogs off the board.

Junior defender Kimaya Cole, sophomore defender Linda Liedel, and Wachira were at the heart of an assertive defense that controlled the sidelines and pushed up to challenge every Yale attack. As a unit, the Crimson has not allowed a goal in its last three games, and on the season, has won all four of its victories in shutout fashion.

Anchoring the defense thus far has been senior goalkeeper Danielle Etzel. The veteran has allowed only two goals in nine games this season, sporting a .913 save percentage and a 4-2-1 win-loss record.

In fact, Etzel hasn’t allowed a goal since Aug. 26, over a month ago. In addition, the senior out of Madison, Conn., leads the Ivy League with a 0.30 goals-against-average over 600-plus minutes of action.

On Saturday night, Etzel made three saves in 90 minutes of work for her fourth individual shutout of the season. One of those saves was a crucial leg save late in the first half to preserve the 1-0 lead.

“I think it just comes down to trust and working for each other, working with each other,” Etzel said. “We all have that same mindset, that same goal that we’re achieving — to get a shutout — and we lift each other up.”

On the other end of the ball, Hamblin noted that Harvard created a bevy of scoring chances but failed to capitalize on them in the heat of the frenzies. The Crimson took 11 shots to the Bulldogs’ nine, and took three corners while Yale took four. Sophomore forward Murphy Agnew took four of Harvard’s shots, two of them forcing saves.

“We did a really good job in creating chances today —w e probably created as many chances as we’ve created this season,” Hamblin said. “We’d have liked to have scored more, but we didn’t. We had to rely on team defensive play to enable us to get out with a win. It showed us we have the quality to get good chances, but now we have to go and make sure we’re putting those away.”

Notably, in the first minute of the second half, both Agnew and freshman forward Sophie Hirst had chances deep in the box to score with the Bulldog goalie on the ground, but the ball was cleared following a scramble in front of the net.

Senior co-captain Zayne Matulis subsequently cleaned up the rebound and sent a shot directly into the body of her teammate Hirst, who unknowingly saved a goal for Yale whilst on the ground.

Throughout the game, it was clear that the scoreline could easily have been more than just 1-0. Moving forward, key for the Crimson will be finishing the opportunities it creates.

But until next weekend, when it takes on Cornell at home, Harvard can practice this week knowing it surpassed its Ivy League rival in a game full of counterattacks and all-out sprints. Keeping up the energy to compete stride-for-stride with its competition was paramount.

“It comes from the team atmosphere, us holding each other up, knowing that we were getting fatigued,” Wachira said. “We’re very close as a team — we don’t really have cliques, everyone is very close with everyone, and I think that helps because it creates such a supportive environment.”

That kind of team chemistry was fostered enormously by last year’s graduating Crimson seniors of 2018, with whom Wachira and her fellow rookies didn’t get to play, but with whom players such as Etzel and the rest of the upperclassmen did. The holdover environment has seemingly been passed on to the 2018-19 squad.

With one win and one draw under its belt in Ivy League play, Harvard can look to the future with optimism.

“I think just build on momentum,” said Etzel of the approach to the team’s upcoming games. “We played pretty well this game, not getting too far ahead of ourselves and keeping our heads down and [keeping on] working.”

The Crimson’s 1-0 victory over Yale on Saturday night is a form of revenge for Harvard, which lost handily to the Bulldogs in New Haven last year, 3-0.

—Staff writer Bryan Hu can be reached at bryan.hu@thecrimson.com