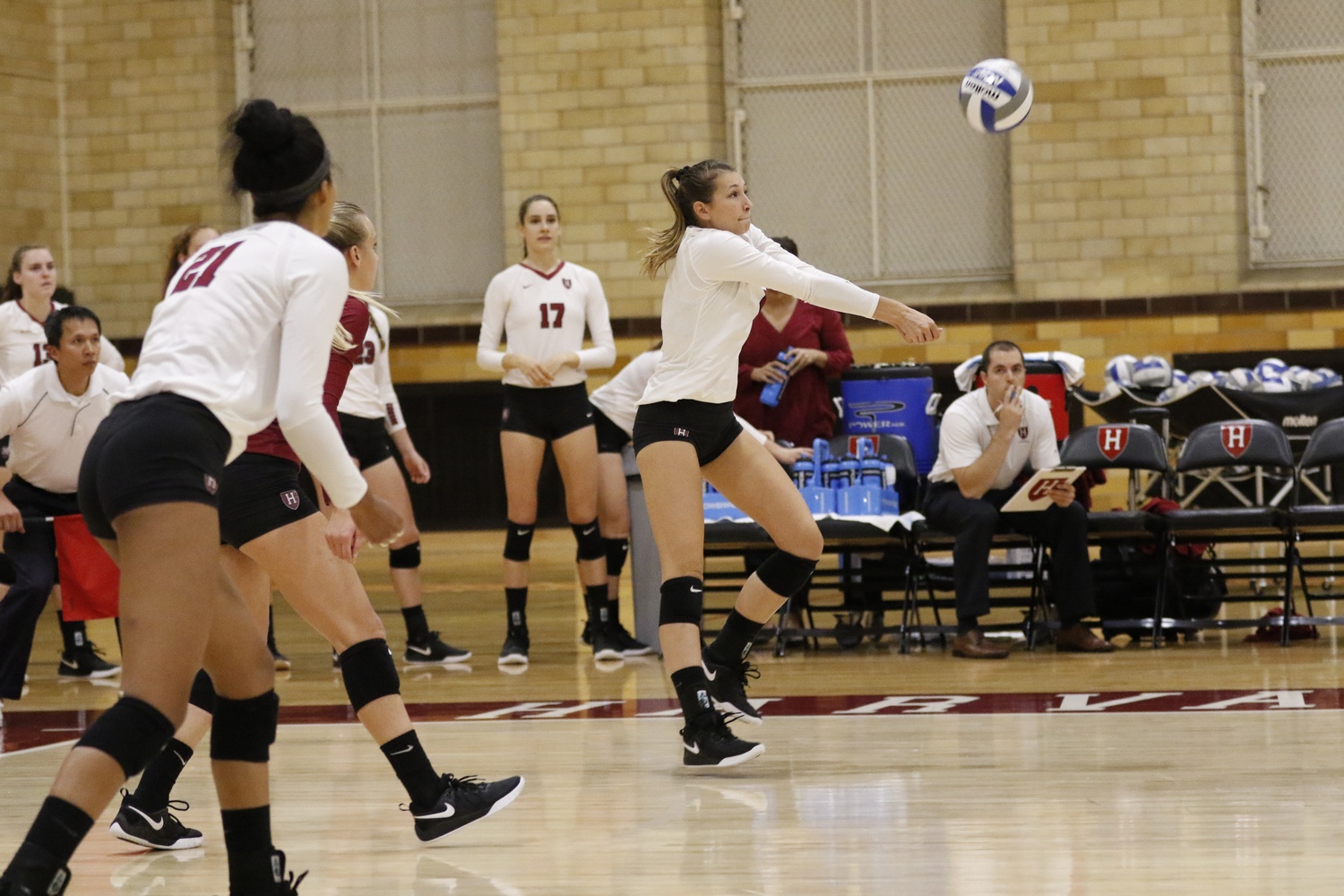 With the two losses, Harvard’s record falls to 5-7 and the team remains winless in the Ivy League. By Timothy R. O'Meara
By Katie O'Meara, Crimson Staff Writer

Though co-captain Christina Cornelius secured 23 kills for the Crimson over two Ivy League conference games, Harvard fell 3-1 to both Cornell and Columbia on the road this weekend.

Following a four game win streak in the middle of September, the Crimson’s quest for the Ancient Eight title has hit a roadblock with the start of Ivy League play. Since Sept. 21, Harvard (5-7, 0-3 Ivy) has lost to Dartmouth (5-8, 1-2), Cornell (8-5, 3-0) and Columbia (8-5, 3-1). These games have been marked by strong defensive plays and offensive struggles.

On Saturday, the Crimson traveled to New York City to take on Columbia. Following a career high 43 assists against Columbia, freshman setter and outside hitter Bella Almanza recorded 27 of Harvard’s 38 assists on the game, helping Cornelius connect on 15 kills, two shy of her career record of 17.

After Columbia captured the first set, 25-19, and the second set, 25-16, Cornelius came alive with five kills, each assisted by Almanza, in the third set.

At first, the Lions and the Crimson traded points, until Harvard went on a 10-2 run, allowing the momentum of the set to turn their direction. Within this run, Almanza assisted on the kills, which came from across all the Crimson’s court.

Even with the momentum of the third set, Harvard battled, but dropped the fourth set, 22-25, to go 0-2 on the weekend.

On Friday, the Crimson fought against Cornell in all four sets, losing 20-25 in the first, 19-25 in the third, and 17-25 in the fourth. Sophomore outside hitter Mindie Mabry had a standout game against the Big Red as she amassed 10 kills over the four sets.

In the first set, Harvard was down by as many as nine points, ultimately fighting back to only lose the set by five. According to senior middle/right side attacker Jocelyn Meyer, the Crimson struggled at the start against the Big Red.

“Definitely at the beginning of both matches we were struggling to get started,” Meyer said. “But once we got started we were making some pretty great plays, getting scrappy touches, picking it up on our block, getting touches on the block, but from there we were not translating those touches into offensive points.”

Harvard bounced back after the slow first set. After three straight kills by Mabry, junior outside hitter Grace Roberts Burbank, and junior middle blocker Maclaine Fields, the Crimson stole the momentum of the match early. But the Big Red continued to put up a fight, creating a battle between the two sides.

At one point tied 15-15, Harvard capitalized on Cornell errors to pull the set away, ultimately winning 25-21. Following the second set, the momentum turned toward the Big Red as the home team captured both the third set, 19-25, and the fourth set, 17-25.

Looking forward, Cornelius hopes that the team uses this weekend to help light a fire under the team during practice.

“We just need to get into our season,” Cornelius said. “One thing that our team talks about all the time is ‘glurgency’ in practice, which basically means game-like urgency. So in practice instead of thinking, ‘Oh it’s just practice,’ I am going to play with the mentality that I would play with in a game. So making sure that we are intentional about every pass, every set, every hit that we do. Making sure that when we see our own players on the other side of the net we are actually imagining playing Penn, Princeton, Yale.”

As the team’s season continues, both Meyer and Cornelius are excited at the team’s prospects, as the Crimson plays each conference team twice.