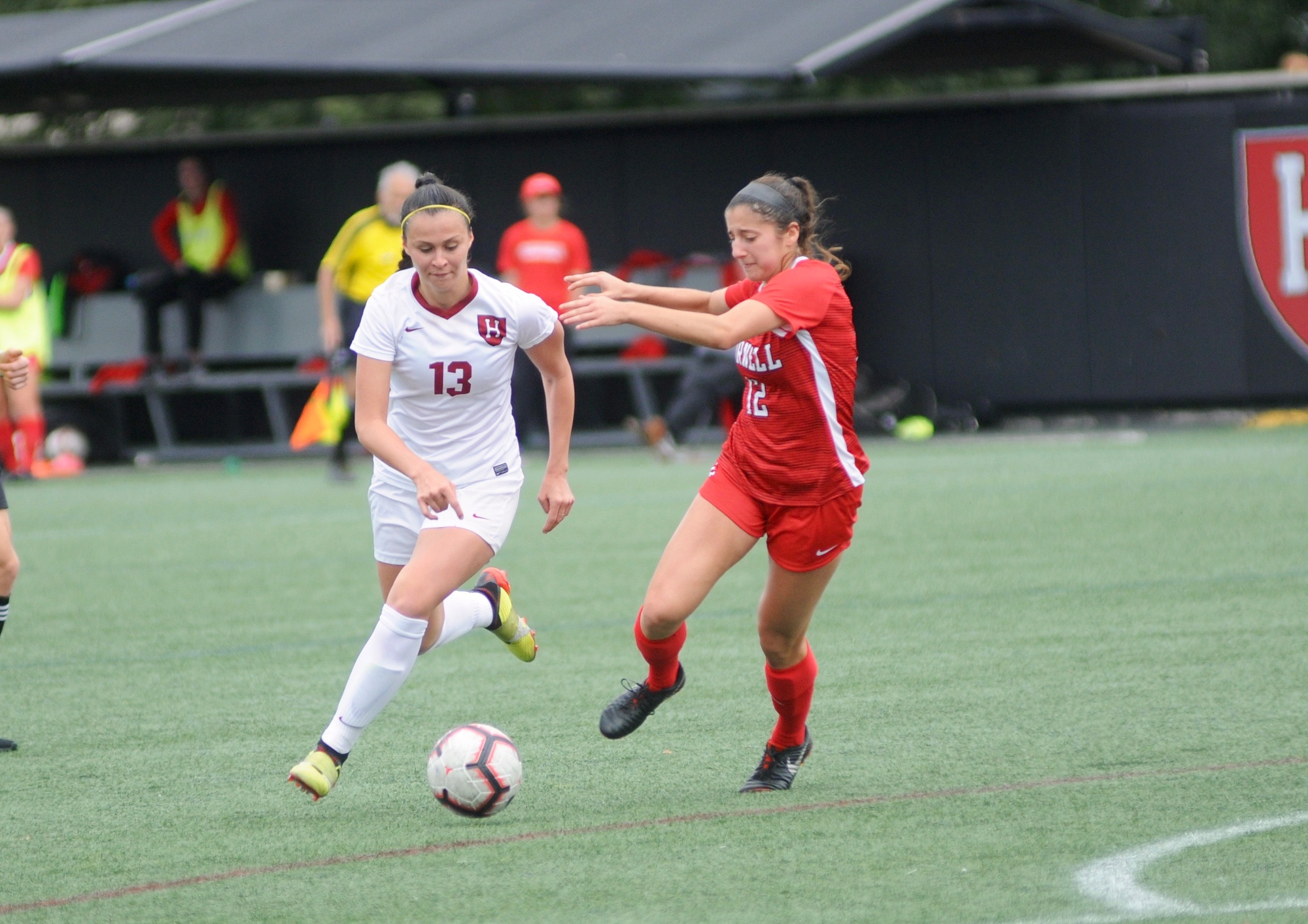 The Harvard women’s soccer team entered Tuesday night’s matchup against Boston University with the chance to make it one full month since last conceding a goal. Even against a potent Terriers attack that had scored in five consecutive contests, the Crimson defense held strong for nearly 89 minutes.

With only 1:07 remaining in the second half, however, BU broke through. A well-placed corner by Terriers sophomore forward Anna Heilferty came down just a few feet in front of the goal, and after deflecting off several players, trickled across the line. Just like that, Harvard’s streak of 478 minutes without allowing a goal ended.

Having seized the momentum, BU went on to dominate the run of play in the first overtime period and ultimately found the winner in the 96th minute, when freshman forward Lauren Adelman drilled the ball home following another corner.

The golden goal pushed the visiting Terriers’ win streak to five, and BU (6-7-2, 4-0-1 Patriot) now returns to conference play with its momentum further bolstered by the comeback victory. The Crimson (5-5-1, 2-0-1 Ivy), on the other hand, still holds on to its undefeated conference record but must find a way to respond quickly as it hits the road for three straight away games beginning Saturday.

“It was a difficult way to lose a game, of course, but we can take a lot of positives from the way we played against a very good side,” Harvard coach Chris Hamblin said. “We’ll go back and assess what happened in the last few minutes there and make sure they’re sorted out before we go back into Ivy play.”

Both sides had the chance to shake up their lineups for Tuesday’s clash, as younger players gained valuable experience while spelling the usual starters. The Terriers made eight changes to their starting lineup from last Friday against Navy, while Harvard made six changes to its lineup from last Saturday against Cornell.

Despite rotating out its goalkeeper and two center backs, the Crimson kept BU off the scoresheet for nearly the full 90 minutes. Sophomores Chamberlain Mathis and Cammie Dopke got the starts at the heart of the home side’s back line, while junior Kat Hess returned between the posts.

Hess played perhaps her best game in a Crimson uniform, collecting eight saves while holding the opposition scoreless over 55 minutes of play. The total doubled her previous career high of four saves, which she recorded last season against Seton Hall.

“We had players making their college debuts today, players trying out new positions,” Hamblin said. “A lot of people stepped up to put us in the position we were in near the end, and that’s a credit to the strong culture on this team.”

“I’ve been trying to make sure that my corners are more consistent, with the spin and getting them closer to the goal,” Mohammadi said. “I felt pretty good about my first one [corner] in terms of location, so I decided to just go for it, hit it a little harder towards the back post, and luckily it worked.”

Adelman turned out to be the only other recorded goalscorer in the matchup when she provided the winner in the 96th minute. Her goal was assisted by junior Ann Marie Jaworski and freshman Lily Perryman, who tallied the first points of her college career.

Tuesday’s contest also marked the collegiate debuts of two Crimson freshmen, Elizabeth Saoud and Margaret Cote. Saoud recorded 18 minutes of game time for the home side, while Cote recorded 12, both in midfield roles.

“I think we had a strong game overall, even though we’re definitely disappointed about the loss,” Mohammadi said. “But we’ll make sure to use it as motivation to get better as we go back to playing Ivy league games.”