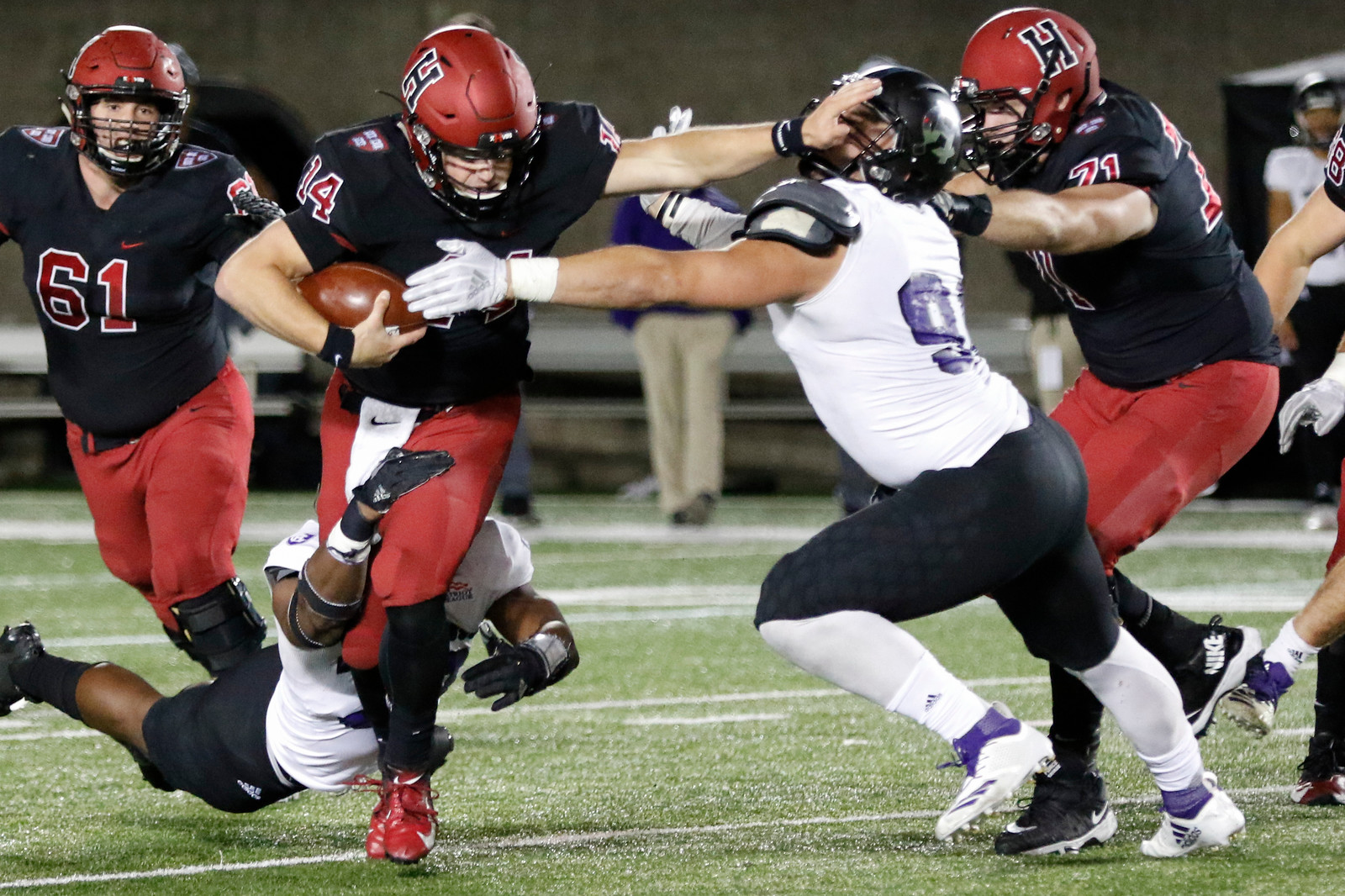 One play during the third quarter of Harvard’s clash with Holy Cross on Friday night effectively summed up the entire matchup.

Sophomore running back Aaron Shampklin secured the handoff from quarterback Tom Stewart and burst forward. Shampklin advanced 16 yards to the Crimson’s 38, but that’s where everything went awry. During a collision, his grasp on the ball faltered and all of a sudden possession was up for grabs.

Crusaders cornerback Josh Hicks scooped up the bouncing ball, but as soon as he appeared set on guiding his team toward Harvard’s end zone, he too fumbled. The Crimson’s John Stivers recovered and took the ball to his team’s 33 yard line. Gain of 11 yards, first down.

Harvard led for most of the contest, surrendered its lead in gut-wrenching fashion, and just as quickly settled down to reclaim its edge. Though Crimson fans may have been expecting their team to triumph more comfortably over Holy Cross, the final score is much more important than the way in which points find themselves added to the board, just as Harvard’s offense was more than content with an 11-yard gain after two fumbles.

“First of all, I don’t think I could be any prouder of our kids, every one of them,” Crimson coach Tim Murphy said. “We always talk situationally about [how to] expect adversity, to embrace adversity...and you’ve just got to fight through it. That’s all we did. We had to make play after play after play, after being 16 points up in the fourth quarter.”

Four plays during Harvard’s final drive stood out above the rest.

Facing third-and-two at the Crusaders’ 49, senior running back Charlie Booker jutted forward out of the backfield only to be enveloped by a mass of his own linemen and opposing defenders. The pile’s tug of war ultimately came up Crimson, as Booker forced the ball just inches past the first down marker.

Several snaps later and in a worse spot, Stewart took to the air on fourth-and-four. His throw found its target, as sophomore Tyler Adams corralled the pass just before absorbing a big hit. The sophomore maintained possession and again did just enough to move the chains.

On the very next play, Stewart hit Adams again. This connection was good for 30 yards, and it was on this play that Harvard dramatically increased its chances of winning. Without a large gain such as this one, the Crimson would have been in no man’s land outside of field goal range with a clock quickly ticking down to 0:00.

Last but not least, kicker Jake McIntyre delivered in a pressure-packed situation. With two seconds on the clock — and as a result no room for error — the junior was iced but coolly knocked the 25-yard kick through the uprights to seal the 33-31 victory as time expired.

With number one receiver Justice Shelton-Mosley out of action for the Holy Cross contest, Murphy had to toss another wideout into the mix. That receiver turned out to be Adams.

“Tyler’s obviously a great athlete,” Stewart said. “You saw him on that one quick slant over the middle, he was able to break a tackle and take it to the end zone. And then when we needed him the most he came up with a play and made a catch — a very tough, contested catch that was a pass interference. I believe in every single one of my guys regardless of what’s going on, and it was incredible. Incredible effort out of him and an incredible team win tonight.”

All told, Adams recorded 117 total yards, 110 more than he had posted in his collegiate career before Friday night.

Perhaps surprisingly, Adams was not the only sophomore receiver who caught his first career touchdown pass on Friday night. In the second quarter, James Batch grabbed a pass from Stewart to extend Harvard’s lead to 20-7 heading into the locker room.

A consistent descriptor of Murphy’s defense this year has been “bend but don’t break.” The defensive unit did exactly that against the Crusaders this past weekend.

“I’m just really proud of the guys, the resiliency we showed,” said captain and defensive back Zach Miller. “It starts with those guys up front. They bust their butts every single down. They go unnoticed a lot, those D-linemen, and they’re some of the top guys in the league, so for them to establish the line of scrimmage two yards back, three yards back every play, that’s such a huge opportunity. And it’s impactful for the guys on the back end, the second and third level.”

Though this cannot be pinned entirely on the defense, as the offense and the special teams unit have struggled, the Crimson has blown double-digit leads in back-to-back weeks. Against Cornell, the defense was unable to counteract that of the Big Red, which held Harvard scoreless for the final 10 minutes. This week, however, the defense came up with a huge stop in the fourth quarter that allowed the Crimson time to get down the field for its game-winning drive.

After stuffing Stewart on a fourth-and-five run, there appeared to be a buzz on the Holy Cross sideline. The visitors commanded a slim one-point lead, but they would get the ball back with just over five minutes remaining on the clock.

As it had all game, though, Harvard’s run defense stepped up to the task. Crusaders running back Domenic Cozier took the handoff three times in a row, and he lost five yards in the process. Just like that, the Crimson procured a crucial three-and-out to return possession to Stewart and his offensive cache.

With one half of the season in the books, it has become clear that Harvard has made a number of costly mistakes on special teams that have cost the team points and have disrupted its offensive rhythm.

The team has surrendered two safeties thus far. The first came against Rhode Island when freshman punter Jon Sot was pinned back against his own end zone, received a difficult snap, and booted the ball off his own lineman’s back. On Friday night, Stewart found himself in a similar situation in which the snap simply flew high and out of the end zone.

It may surprise some to learn that the most recent safety occurred directly following a kickoff. With the current kickoff rules, it is difficult not to advance the ball to at least your own 20, but this time, an apparent miscommunication led to return man Adam Scott having to make a desperation dive to stop the ball on his own two yard line.

After regrouping from the safety, the Crimson had to offer a free kick from its own 20. Holy Cross picked up an early first down on this drive, but that is all it would get, as junior defensive end Brogan McPartland sacked quarterback Geoff Wade to force a punt. On this punt, Harvard would make another costly special teams mistake. Returner Henry Taylor muffed the fair catch, and the Crusaders’ Cristos Argys recovered at the Crimson’s 13. This change in possession allowed Wade to hit receiver Martin Dorsey to put Holy Cross up, 31-30.