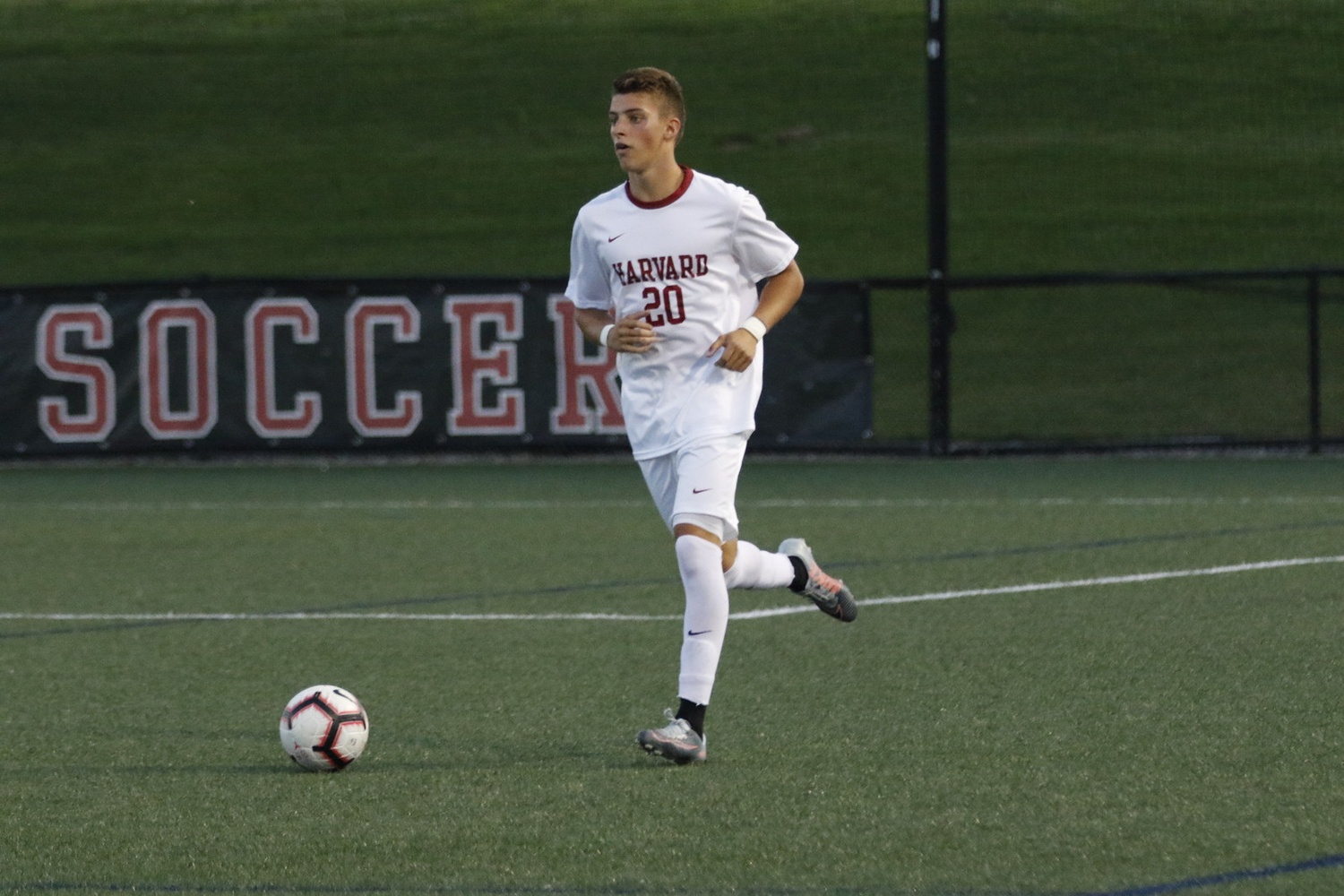 Sophomore defender Fernando Docters advances the ball in his own half in Saturday's overtime loss. By Timothy R. O'Meara
By Ronni Cuccia, Crimson Staff Writer

On Saturday the Harvard men’s soccer team (3-9-0, 1-2-0 Ivy) participated in a hard fought match against Brown (6-5-0, 1-2-0) that ultimately ended in a 1-0 loss for the Crimson. Brown earned their second straight victory and its first Ivy League win of the season.

After this weekend’s games, Princeton remains at the top of the Ivy League with seven points by keeping an undefeated conference record (7-4-1, 2-0-1 Ivy). Brown and Harvard are tied for sixth with three points each.

The Crimson went into the game after another very close 1-0 loss against Boston College in a non conference game on Tuesday October 9th.

“We felt pretty good going into the game even though we lost midweek at Boston College,” Harvard captain Sam Brown said. “We actually played really well and dominated large spells of that game so I think everyone was pretty confident going into Saturday. And I think whenever we have a good week of training which we did, guys are more confident and there is no sense of nervousness.”

This most recent match for Harvard went into double overtime. The only goal of the game was scored in the 103rd minute by Bears' senior forward Toby Howell. This was the third game of the season that Brown won in overtime this season.

Under the lights at Stevenson-Pincince Field in Providence, R.I., the game winning play began when junior midfielder and Bears' leading goal-scorer Daniel Schiller ran down the left flank of the field and sent a cross towards the Harvard goal. Howell put himself in striking position and hit the ball first time into the back of the net. It was Howell’s second goal of the season.

Despite the low score, there was plenty of action throughout the match. In the 68th minute Brown had a scoring opportunity when Howell dribbled down the right side of the field and passed the ball to freshman midfielder Nicolas Perez. Perez’ shot went just wide of the net.

With just ten minutes left in regulation, Harvard senior forward Cesar Farias Jr. fired a shot on target, but Bears' keeper freshman James Swomley managed to leap into the air and knock the ball over the crossbar to keep Brown in the game.

Once regulation play ended, the game went into overtime, which was two ten minute halves. In the first half of overtime, Harvard took the only two shots, even though on the pitch Brown had most of the possession.

“Brown gave us a good amount of space in the midfield and we probably had most of the ball that we had all year so we had a lot of possession,” Brown said. “So I think that with possession comes more chances to create opportunities which led to more shots obviously. I think we kind of settled down probably midway into the first half and then we kind of carried that momentum into the second half as well and had the ball for large chunks of the second half.”

The Crimson left the match with impressive statistics. Harvard outshot the Bears 8-7 in the first half. The team had a season high of 16 shots with 2 on goal. Sophomore goalie Matt Freese was solid in the net with four saves. Freshman forward Alfred Perez and freshman forward/ midfield Nico Garcia- Morillo led the Crimson’s offense with four shots each. Harvard also had seven corner kicks throughout the game.

This is a significant difference from Harvard’s previous game against Boston College where the Crimson had 10 shots total and 2 on goal. Looking forward to their next game against Princeton, the team hopes to carry similar momentum and offensive success.

“Everyone was obviously pretty disappointed and down just because we were not happy to lose in overtime and then obviously in the Ivy League it’s tough because each game matters so much,” Brown said. “We haven't thought of any major changes, maybe one or two minor adjustments, but that also comes with preparing for what Princeton brings. So we will try to look at them and see what they have and see where we can kind of exploit them.”