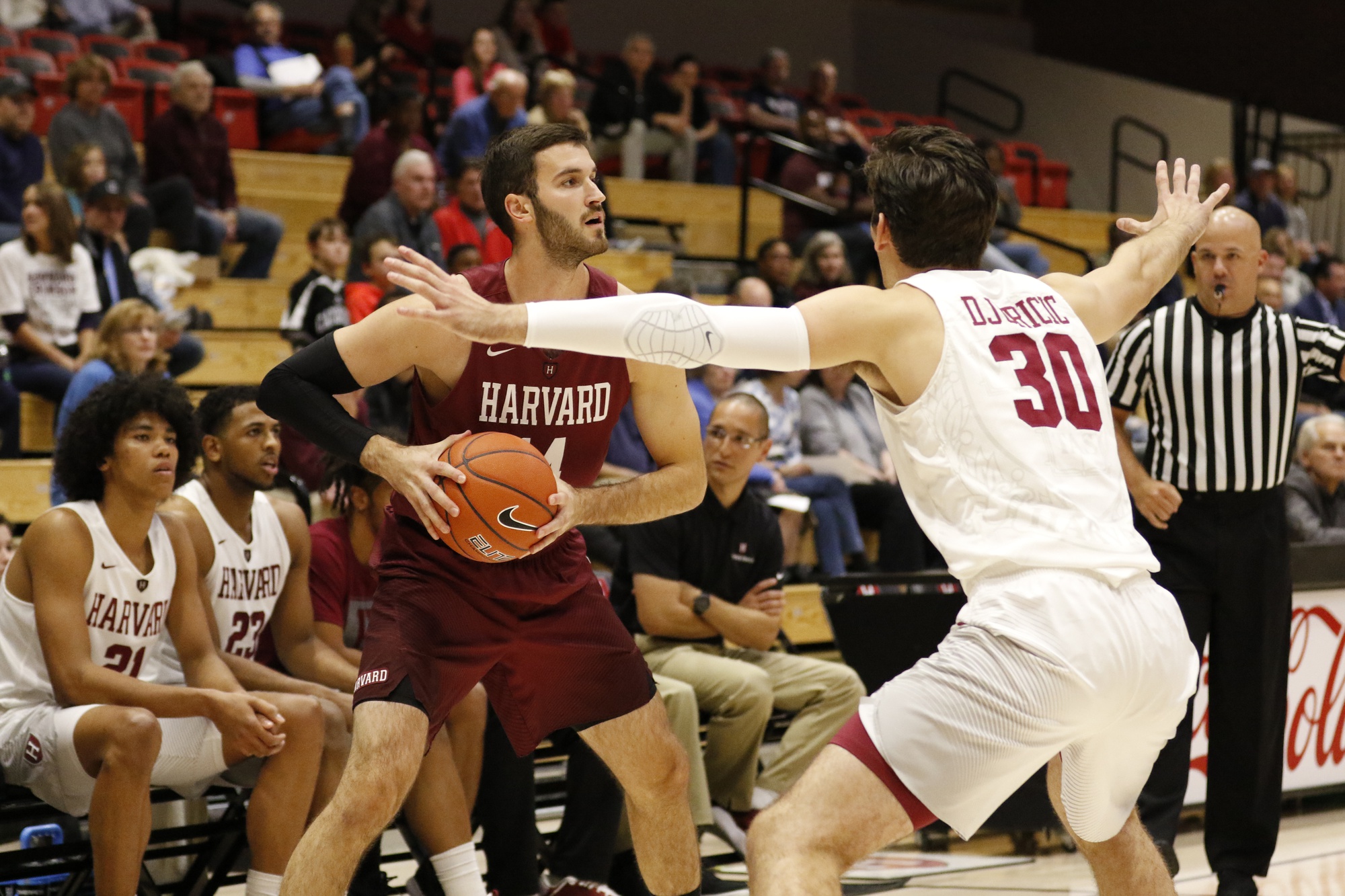 Senior Balsa Dragovic has played sparingly in his time with the Crimson but seeks to make his first NCAA Tournament appearance this season. By Timothy R. O'Meara
By Joseph W. Minatel, Crimson Staff Writer

For the second straight season, Harvard men’s basketball has been pegged as the preseason favorite to win the Ivy League. A panel of media representatives granted Harvard 12 of the possible 18 first place votes in the poll, doling out five to Penn and one to Yale. The Quakers shared the Ivy League title with the Crimson last season, winning on its home court in a 68-65 nailbiter to clinch a berth to the NCAA Tournament.

It is no surprise that the current outlook of the conference places Harvard’s squad firmly atop the Ancient Eight, as the Crimson returns a strong batch of juniors. Harvard’s Class of 2020 includes reigning Ivy League Player of the Year forward Seth Towns, All-Ivy first team forward Chris Lewis, and 2016 Rookie of the Year guard Bryce Aiken, who will be returning from an injury that sidelined him for most of last season. The junior class accounted for over 76 percent of the team’s scoring and 67 percent of the Crimson’s minutes. The rest of the returning roster combined with the juniors to return 99.4 percent of Harvard’s scoring from last season, the second most in the country.

Penn has a similarly talented duo of juniors in forward AJ Brodeur and guard Ryan Betley, two key pieces in the Quakers’ run to March Madness last season. Both were All-Ivy selections at the end of last season, with Brodeur being a unanimous selection. The clashes between the two squads will not only have familiar faces, but will also prove to be key determinants to the Ivy League crown.

Although this title is decided within regular season play, a new element was added two seasons ago in the form of a conference tournament. The relatively new four-team format keeps the end of the season exciting for most—if not all—of the Ancient Eight. Last season, seven of the eight teams in the conference were playing for a possible conference tournament bid in the final weekend of the season, ensuring that every single matchup heading into the final slate of games carried weight.

Despite this fact, the preseason poll seems to suggest a division within the Ivy League between an upper and lower half. The Crimson, receiving a leading 137 points, was ranked 15 points above Penn’s 122, who lead Yale by only 12 points. Fourth-ranked Princeton, however, received 92 points in the poll, in front of a fifth-placed Brown team that headed up the bottom half of the poll with only 64 points. Cornell and Columbia followed closely behind with 54 and 43 points, respectively, leaving Dartmouth deep into the cellar at only 21 points.

Even if parity is perceived to be relatively low for the bottom half of the league, the Ancient Eight as a whole has a bright future ahead. The conference will field similar players with an extra year of seasoning under their belts. Twelve of the top 15 scorers from last season will be suiting up again, including the entire All-Ivy first team and six of the seven players that made up last year’s second team. Like Harvard, the Ivy League boasts a talented crop of returning young standouts that are sure to make a serious impact.