It is difficult to walk on to most collegiate sports teams, but crew is one exception. With the contributions of a legion of walk-on members, Harvard's rowing program strengthens both its performances on the course and the community within its ranks.
By Mohamed Ahmed 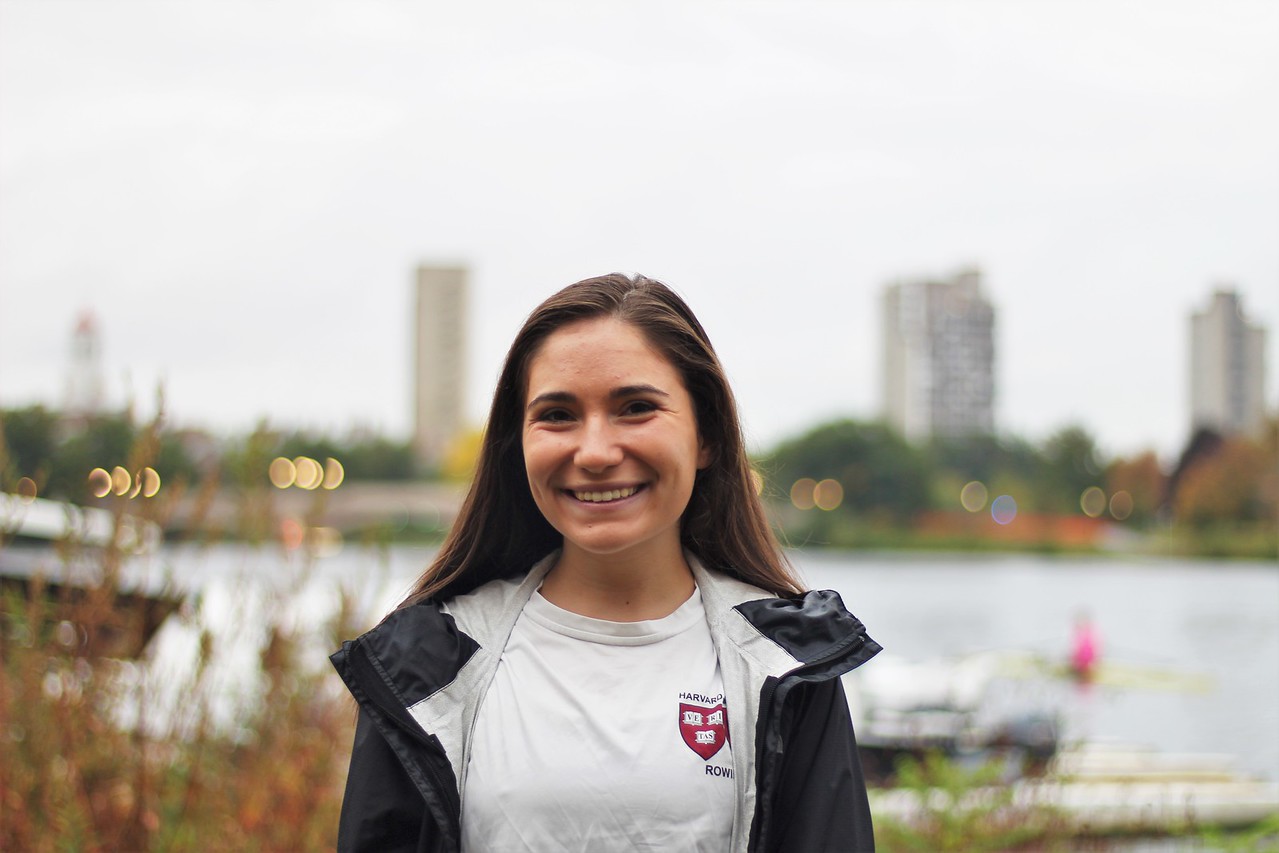 Junior Juliet Pesner is one of the many talented walk-ons for the Crimson. By Krystal K. Phu

While many collegiate sports at Harvard accept walk-ons, few are more walk-on friendly than Harvard crew. Every fall, the program welcomes a new, wide-eyed class of freshman eager to make their mark on campus.

For current walk-ons, a shared desire to continue their athletic careers, be a part of a larger community, and exploring a new passion combine to form strong bonds among this group.

One of those first year walk-ons is current member of Harvard men’s heavyweight crew, Zach Keller.

“I had never rowed before, but they actually have a novice program [last] fall, where a coach teaches [prospective students] who want to join the team [how] to row,” said Keller when talking about his rowing experience.

Keller, a current sophomore from Summit, N.J., fondly remembers his journey as a walk-on. While attending The Pingry School, Keller played both basketball and baseball. He quickly realized that he did not want to pursue them on a club level at Harvard. Still wanting to compete athletically, Keller decided to set his sights on a new sport. Intrigued by the well-established walk-on process and recommendations from others, Keller ultimately decided to join the heavyweight team.

“I’m working a lot harder now, but that is the function of playing at a collegiate level,” the Summit, N.J., native said. “There is a much bigger fitness component in rowing.”

Senior Emily Moya, who joined the women’s lightweight crew as a walk-on sophomore year, echoed Keller’s sentiment about the increase in workload associated with being a varsity athlete for the Crimson.

Moya attended Boston Latin School, where she was a cross country and track runner. In high school, athletics were a huge part of her identity and was a feeling she missed during her freshman year. Her desire to re-engage with sports lead her to join the women’s lightweight crew her sophomore year as a walk-on.

“Being an athlete here at Harvard, it definitely changes the way you are as a person,” Moya said. “It helps you become more organized and a big aspect of crew is it brings a lot of grit to the sport, as well as perseverance.It has transitioned into my academics, and that is where I have seen myself grow a lot.”

While some walk-ons have no prior rowing experience, that is not the case for sophomore Andrew Haimovici. A member of the men’s heavyweight crew, Andrew had previous rowing experience in high school and enjoyed crew.

“I already did it in high school, so I might as well give it a go here,” Haimovici said. “It is a legendary team with all the history — I thought it would be cool to join.”

The day before move-in day, Haimovici emailed the coach inquiring about joining the team. After some back and forth with the coach, including a primary assessment of his abilities, he was invited to the team practice. During his freshman and sophomore years of high school, Haimovici did not enjoy rowing that much, citing the intensity involved in rowing and the time commitment required. But as Haimovici’s skills started to develop and his ability to compete increased, his enjoyment of rowing grew.

“I live with rowers,” Haimovici said. “I eat almost every meal with rowers. If I go out on the weekends, I’m going to go out with rowers. It’s not one of those teams that you just show up at the boathouse and that’s over with.”

The strong presence of community that Haimovici talks about can be felt as soon as you join the team, as is the case for freshmen and Pennypacker resident Noor Kamal.

Coming to Harvard, Kamal wanted to try something new and step outside her comfort zone. The Long Island, N.Y., native was introduced to coxswaining by her friend who had been a steerer for the Crimson and another person from her high school had also coxed. Kamal credits her teammates and coaches for the wonderful advice she has received as she navigates her first year at Harvard.

“It’s awesome...the guys, it truly is beautiful to see the sense of camaraderie they have for each other,” Noor said. “Getting the boats out the dock...they’re all having such a blast.”

A very important part of the Harvard crew experience is the sense of community. This camaraderie creates an atmosphere of support and not only allows each individual person to grow but also lets the whole team grow as well.

An example of this very tight knit community is the training that occurs for the Harvard-Yale Regatta. To train for this race, the team goes to a special training facility called Red Top, located in Connecticut. This training facility exists for the sole purpose of training for this race. The rowers spend two entire weeks there, devoting their time extensively to prepare for the race.

“You literally do everything with the guys on the team,” Keller said. “You bunk together. You eat and train together. It was awesome. It felt like I really got to know the guys a lot better and develop really close bonds with them.”