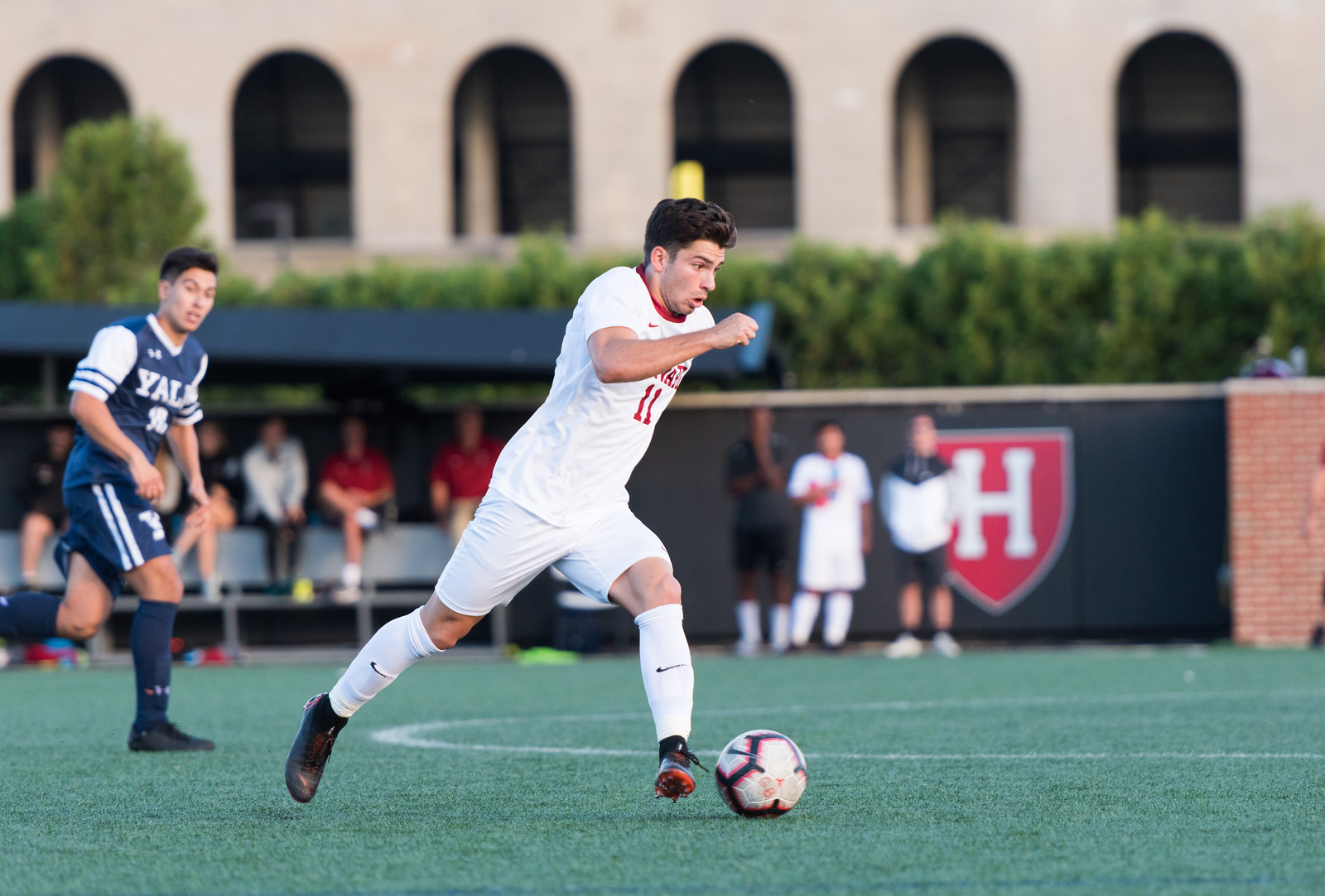 Coach Fucito has returned to his alma mater to apply his offensive expertise to the Crimson's forward corps. By Justin Chiang
By Shuvom N. Sadhuka, Contributing Writer

For years, the men’s soccer team would walk back to the locker room to see the jersey of one of its legends, Mike Fucito ’08, hanging up on the wall. Fucito played for the Crimson for all four years, racking up the Ivy League Rookie of the Year award, three All-Ivy first teams, and scoring 32 goals. Today, he is back at Harvard as the squad’s new Assistant Coach.

A native of Westford, Massachusetts, Fucito grew up a hockey player, wrestler, and soccer forward before making his way to Cambridge. His time with the Crimson was marked with great success on the field, enough to be drafted by Seattle Sounders FC in the 2nd round (46th pick overall) of the 2009 MLS SuperDraft.

After three years with the Sounders, Fucito made stops with the Montreal Impact, Portland Timbers, and San Jose Earthquakes, totaling 53 games over his career before taking up a Harvard coaching position — first with the men’s golf team.

“I sort of needed a break from soccer, and golf has always been one of my passions,” Fucito said. “Golf also opened my mind up to coaching as a career.”

Even as a golfer, Fucito has had an impressive career, being named to the Golf Digest Magazine’s Top 100 Professional Athlete Golfers in December of 2015.

But eventually, Fucito felt an urge to return to soccer, transitioning from the links to the pitch.

“[The men’s soccer team is] a great group of guys,” Fucito reflected. “[Soccer] is all I’ve done, all I’ve known for my whole life, so coming back and coaching is a pretty natural fit.”

Fucito’s stellar playing career and coaching background helped him transition to the soccer team this past June through being able to see the game from both the players’ and coaches’ perspectives.

“Immediately, he got a lot of respect from the players,” said captain and midfielder Sam Brown. “People pay attention more to him, more than guys and coaches who maybe haven’t gone to the professional level.”

For now, Fucito is working with the team’s forwards, which means his primary focus is on honing the Crimson’s offense. But in many ways, Fucito still feels like a player leading his team rather than a coach.

“I still see myself as a player,” Fucito said. “You look at the game with a different lens [as a coach], obviously. It’s definitely different. When you’re playing, you have direct control over what happens in the game. As a player, you’re always thinking, ‘What can I do on the field to help my team win?’ but as a coach you’re sort of looking at how all the pieces fit together.”

Fucito’s experience at all levels of soccer helps him bring new perspectives to his coaching, being able to compare side-by-side the differences in play between college and professional soccer.

“In college I was always the fastest player,” Fucito said. “I was still pretty fast in the MLS, but the whole game just moves faster. Everyone is fit, everyone is skilled, so it becomes much more of a question of how you’re reading the game and how you are executing tactics. The season is more tiring, with more games than college, and things like the three [substitution] rule, and so you also have to take care of your body more.”

Coach Fucito’s relative youth and recent exposure to the game also help him in sharpening his players’ skills.

“He’ll sometimes just jump into drills and play with us,” Brown said. “It honestly feels like he’s one of us.”

As the Crimson looks to finish its season on a positive note, Fucito’s competitiveness in practice and in games distinguishes him from previous coaches and promises to give his group a boost down the stretch.

“[Fucito] is super different from any coaches that I’ve had. Probably the intensity and competitiveness that he brings is something that I’ve not worked with before,” Brown concluded.