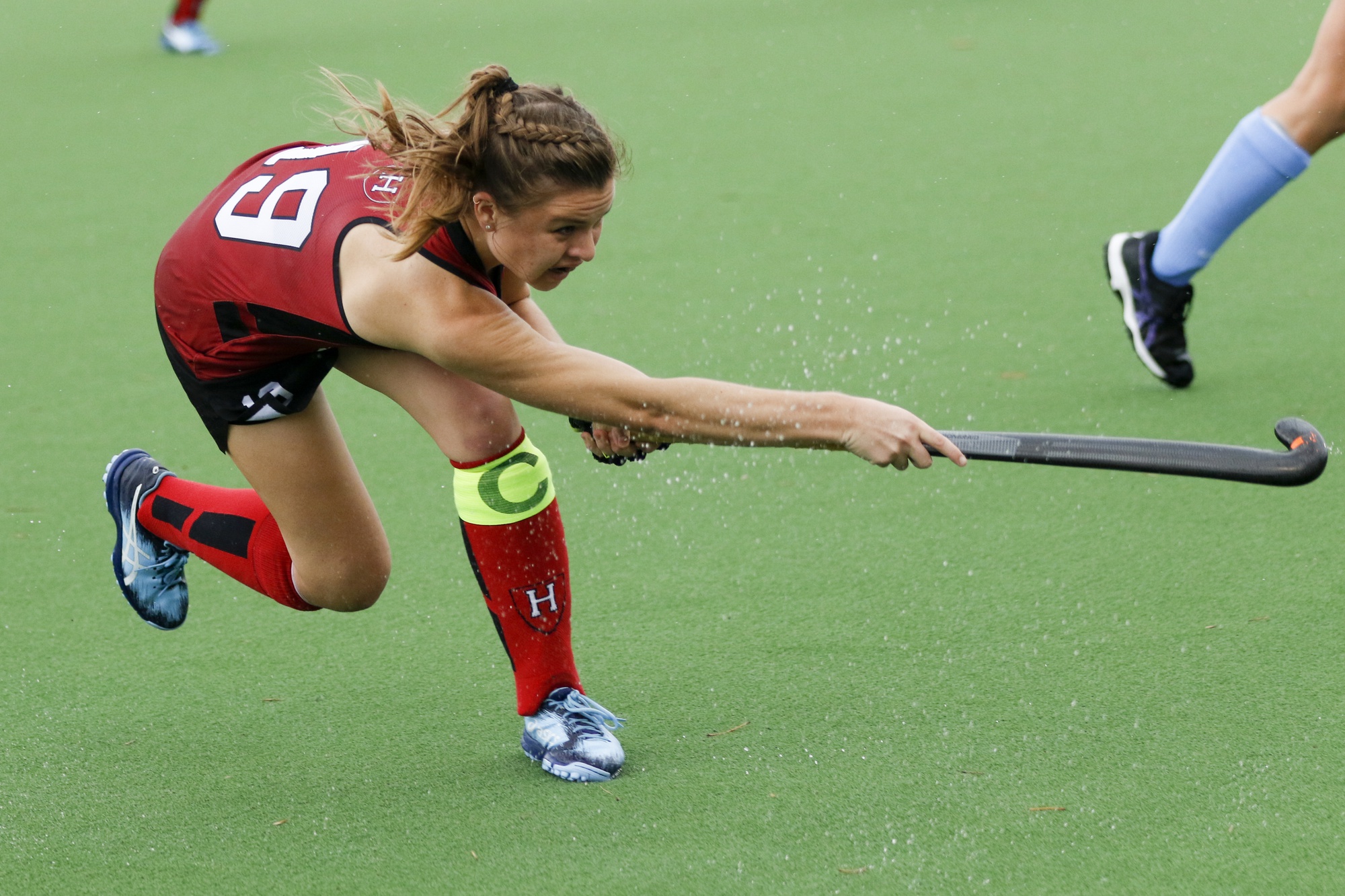 For the first time in school history, No. 6 Harvard field hockey (17-1) earned an NCAA tournament win and will advance to the NCAA quarterfinals. This was its first victory after five losses in previous tournament berths, beating No. 9 Penn State (12-6) in the inaugural meeting between these two programs.

The Crimson’s resilience was a significant contributor to its dominant performance. First year goalkeeper Ellie Shahbo, whose defensive efforts were critical in the win, remarked on the team’s fierce mentality heading into the game.

“Everyone was determined today and everyone had faith that if we worked that little bit harder over the field and trust the game plan we had set out, we would be fine,” Shahbo said. “The team just had so much grit and determination to win, especially when we put our mind to it.”

Harvard demonstrated its tough mentality from the outset of the game. It secured initial momentum with early saves from Shahbo and scored two goals within the first few minutes of the game. Head Coach Tjerk van Herwaarden recognized the importance of having an aggressive mentality at the beginning of the game.

“You never know what they’re going to bring in the beginning,” van Herwaarden said. “We were able to withhold pressure from them in the first 10 minutes. We got a critical boost from our first two goals.”

A mere 23 seconds later, Harvard had its second goal of the game after sophomore forward Tessel Huibregtsen had a great run into the circle to set up a powerful shot by junior forward Bente van Vlijmen.

The Crimson’s offensive flurry would not stop there. Having already had a defensive play that set up their first goal, Greenwood exhibited her two-way versatility with an array of shifty moves as she weaved through the Nittany Lion defense. She then scored on a reverse stick shot to put Harvard up by three.

In less than five minutes, what was once a 0-0 defensive battle turned into a Harvard offensive showcase that resulted in a sizeable 3-0 lead for the Crimson. Although Penn State would soon score off a penalty corner, Harvard had a comfortable 3-1 lead heading into the half.

Despite being up by two, the Crimson remained aggressive with its scoring attack and played relentless defense to prevent the Nittany Lions from having any chance of posing a comeback threat. A spectacular run by Huibregtsen from the near sideline led to a low hard shot into the cage. Then freshman forward Olivia Hoover corralled a long pass from senior back Olivia Allin to score and make it 5-1.

With these two quick scores, Harvard put the game out of reach and cruised to victory the remainder of the game. At the very end, Young put the exclamation point on the Crimson’s first ever NCAA tournament win with a goal at the last minute.

A strong component of Harvard’s domination not only during this game but throughout the season has been their impeccable teamwork and camaraderie. Coach Tjerk alluded to the unity amongst the team as an integral part of its historic run.

“I think the connection amongst these girls is truly amazing, they’re willing to sacrifice a lot for their teammates,” van Herwaarden said. “The senior class is full of great leaders. They’re able to do the work and set the pace, and everyone follows them.”

Having already made history, this Crimson team can continue to rewrite the record books by securing a win in its quarterfinal match against No. 3 Princeton (14-4). They have already beaten the Tigers on its home field thanks to a strong defense that only allowed one goal to a Princeton team which had been averaging over three a game. Freshman phenom goalkeeper Ellie Shahbo will have to continue to be a stalwart for the Crimson to have the defensive presence necessary to advance to the semifinals.

Look for Harvard’s road to a national championship to continue on Sunday at 1 pm where it hopes to oust the Tigers and make history once again.