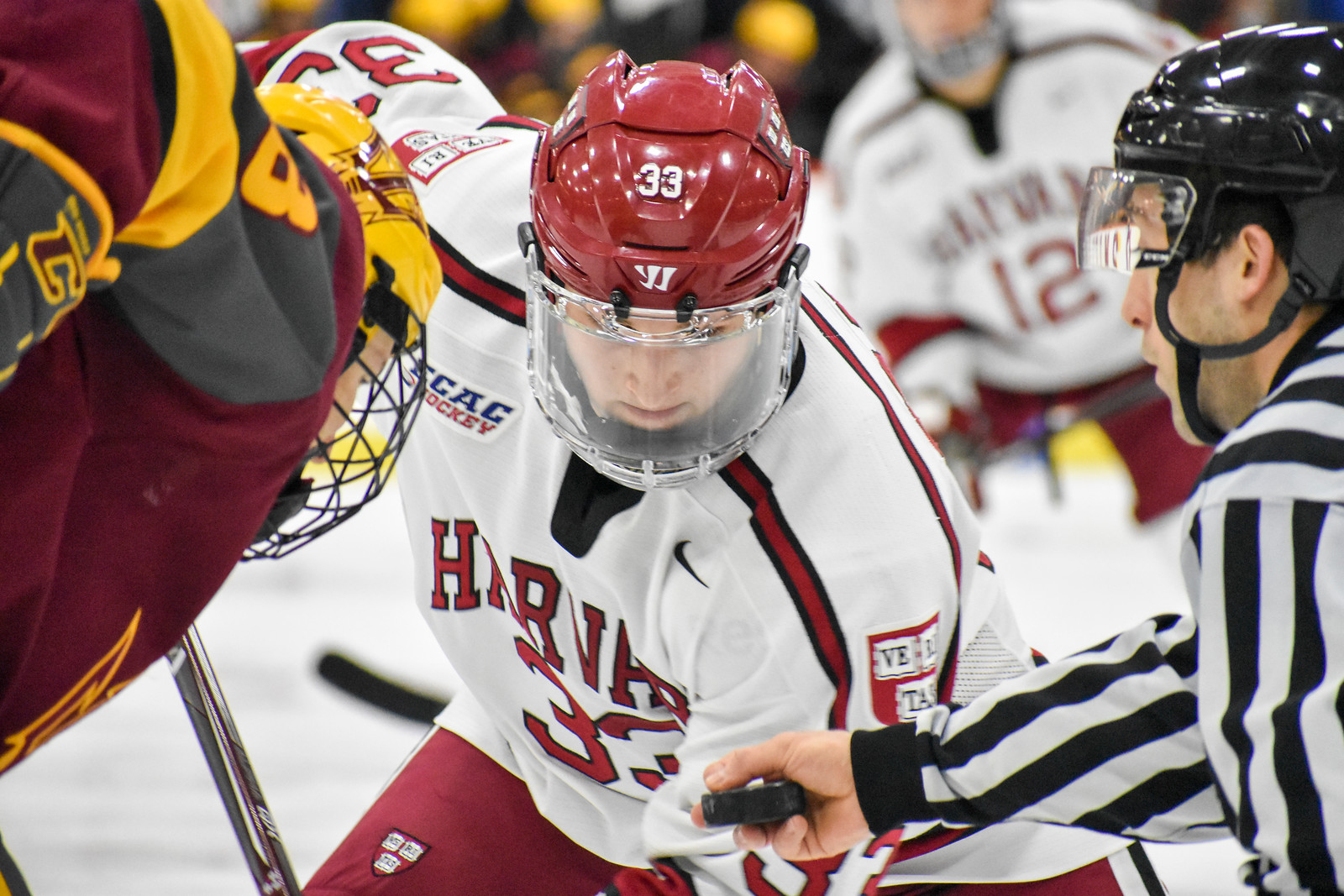 The Crimson walked away from the weekend with just two points despite carrying play for much of the back-to-back. By Amanda M. DiMartini
By Spencer R. Morris and Stuti R. Telidevara, Crimson Staff Writers

While most Harvard students geared up to enjoy the annual Harvard-Yale football game, the men’s hockey team prepared for a two-game home stand against No. 18 Arizona State.

The Sun Devils have clashed with the Crimson just once before, falling 7-0 and 6-2 to the Crimson in 2016. But this year’s iteration of the Southwestern foe was nationally ranked, having beaten Nebraska Omaha, Michigan State, and No. 6 Penn State in the early portion of its schedule.

After a winning performance against the Sun Devils on Friday, the Crimson skated in a rematch with Arizona State on Saturday despite most of the attention around Harvard Athletics being directed to Fenway Park for this year’s installment of The Game.

The Crimson had the chance to earn its first four-point weekend of the season and build a small win streak of three games. For most of the contest, Harvard looked as though it would achieve these minor milestones, but the game unraveled in the latter half of the third period.

“We had our opportunities, and then some,” Crimson coach Ted Donato ’91 said. “It’s not like I’m disappointed in the caliber of our play. I thought we worked hard, we controlled the puck a lot, we had numerous chances…. When it was all said and done, we didn’t get it done.”

With nine minutes remaining in the final frame and Harvard ahead, 2-1, Sun Devils forward Johnny Walker, who entered the weekend atop the nation in scoring (11–6—17), was sent to the box for boarding. The Crimson’s ensuing powerplay provided an opportunity to extend the lead to two goals. Instead of padding its advantage, though, Harvard ceded a shorthanded goal.

Arizona State senior Dylan Hollman skated the puck into the zone to the left of Crimson net-minder Michael Lackey. The forward, driving hard to the middle of the ice, lost his footing and slid through the slot after a backchecking freshman Casey Dornbach tied him up. With commotion in front of Lackey, senior forward Anthony Croston picked up the loose puck and fired it through Lackey’s five-hole, tying the game.

The tilt would remain even until the end of regulation. Three minutes into overtime, Sun Devils freshman blueliner Josh Maniscalco threw a puck toward the cage from the point. The low shot found its way through traffic and beat Lackey, causing Arizona State players to spill over the boards.

And just like that, a Harvard team that controlled the pace of play for the majority of the first 50 minutes of regulation left the Bright-Landry Hockey Center on Saturday night without a point.

“We played awfully well to end up with no points tonight,” Coach Donato said. “It’s frustrating, but I think we’re starting to build a lot of the things into our game that will allow us to have success.”

The Crimson’s powerplay, which cashed in three times this weekend, was a major part of its success against the Sun Devils, who came to Cambridge this weekend as owners of the top penalty kill in the NCAA (92.7%). 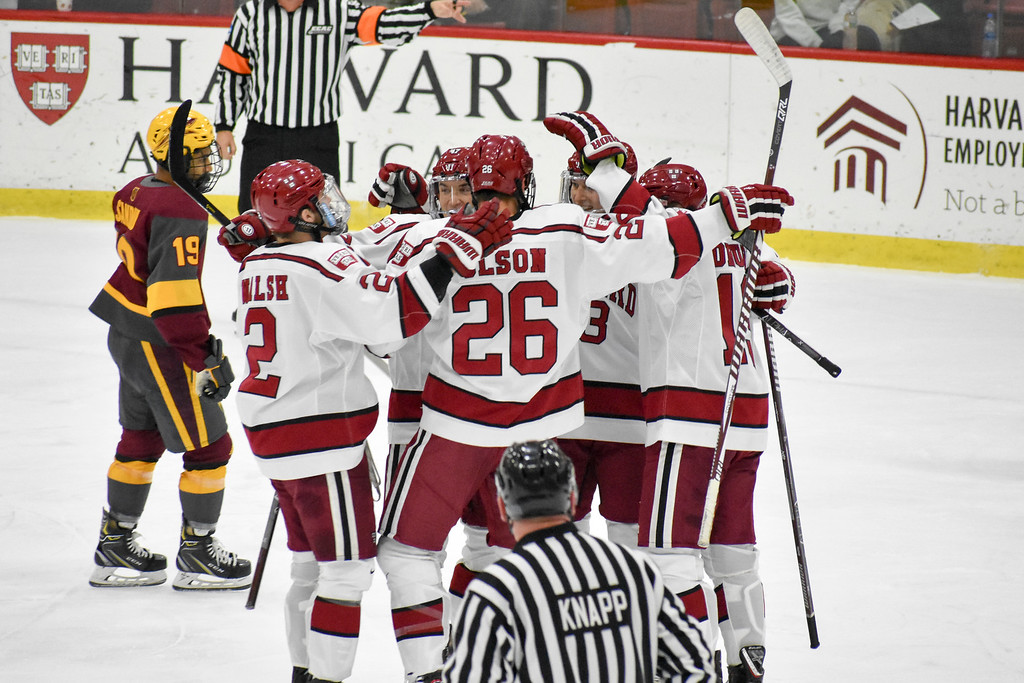 Harvard struck three times on the powerplay this weekend, but its man-up success seemed to run out on Saturday just when the team needed it most. By Amanda M. DiMartini

Co-captain Lewis Zerter-Gossage contributed to the flourishing powerplay with a goal on the man-advantage to open the scoring in the first period. The senior was responsible for both of his team’s goals on Saturday night and finished with four points (3–1—4) on the weekend.

The success of Harvard’s man-up unit, however, seemed to run out just when the team needed it most.

After allowing the game-tying tally, the Crimson had a powerplay opportunity with five minutes to go in regulation, as well as one to open the overtime frame. Frustratingly, neither attempt proved fruitful, and Arizona State goaltender Joey Daccord was a major reason why.

The junior backstop fended off an onslaught of chances on Saturday (2 GA, .952 SV%), eclipsing the 40-save threshold for the 15th time in his career.

“That’s why we think we have the best goalie in the country, and he proved it tonight,” Sun Devils coach Greg Powers said. “To have a great penalty kill, your best PK guy has always got to be your goalie…. The guys in front of him worked their tails off, too.”

Daccord’s performance, plus his team’s late-game perseverance and a few fortuitous bounces, allowed the Sun Devils to overcome adversity from the officiating (38 penalty minutes) and steal a win from Harvard to split the weekend.

Friday’s matchup was expected to be defined by Harvard’s power play, then-second in the NCAA, and Arizona State’s then top-ranked penalty kill. Special teams did prove to be a significant factor, and not one that went in the Sun Devils’ favor.

The Crimson’s man-advantage unit led the hosts to victory, going 2-for-4 on the night. Harvard also saw considerable improvement in its penalty-killing, which owned a lackluster 61.1% kill rate prior to Friday’s game. Despite this, coach Donato saw room for improvement moving forward.

“We’re happy to come away with the win,” coach Donato said. “I don’t think we played very intelligently in the second half of the game, whether it was turnovers, or taking penalties. I think we did a lot of things to hurt ourselves. I give Arizona State credit...but I think that for me, as a staff, we were a little bit frustrated.”

After outshooting Arizona State 14-2 in the first frame, Harvard left the ice with a 1-0 lead thanks to a tip-in from sophomore forward Jack Badini. Both teams racked up shots in the second, thanks to five minor penalties, and both cashed in on the power play that period. Junior defenseman Adam Fox found the net before the Sun Devils could, on a sharp-angle shot by the goal line.

“I was just trying to put the puck on net,” Fox said. “I saw a little area, I was lucky enough to hit the spot I wanted. There was obviously a good screen in front.”

After an Arizona State goal trimmed the Crimson’s lead, Harvard regained a two-goal cushion, again on the man advantage. Freshman forward Jack Drury stuffed in a rebound despite Daccord’s best efforts to deny him. Daccord, who has been crucial this season to the Sun Devils’ penalty-killing success, was unable to keep Harvard out on half its power play opportunities. 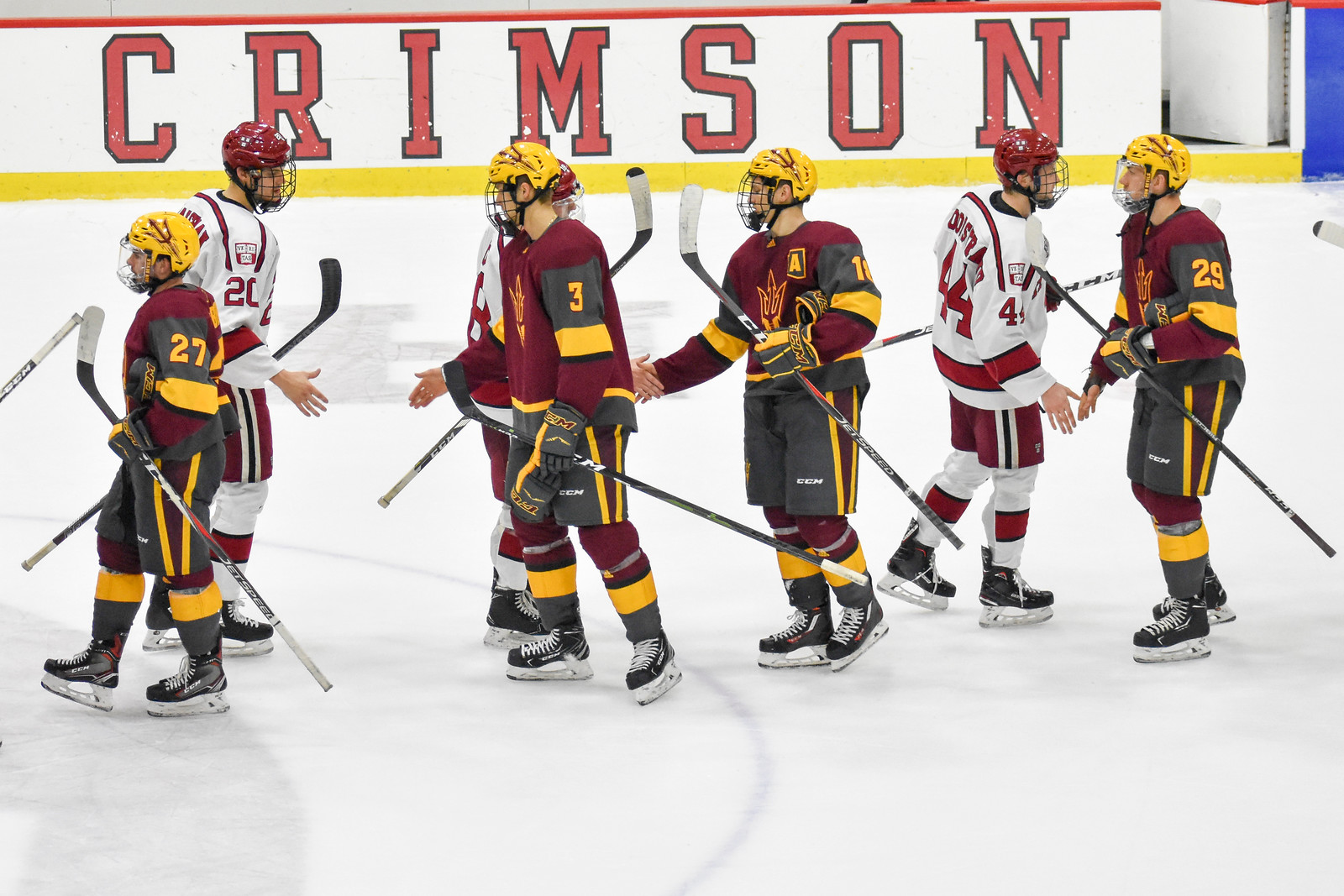 While coach Donato's squad realizes it squandered a chance at a four-point weekend, it showed that it can skate with ranked opponents by taking a game from No. 18 Arizona St. By Amanda M. DiMartini

At the other end of the ice, Lackey was key to the Crimson’s successful night. By the end of the night he was sitting on a .968 save percentage, a career-best other than his one shutout. While Harvard worked well to keep the visitors to the outside, Lackey stymied nearly all of the attempts thrown his way, including six shots from the lethal Walker.

“[Lackey] made a couple of key saves at key times in the game, especially on their power play,” coach Donato said. “Over the last three games, he’s looked like he’s getting more comfortable. It’s very difficult to have success without getting great goaltending, and I thought tonight we were a lot closer to that than we were earlier in the year.”

The night’s goal-scoring was capped off by a breakaway goal from Zerter-Gossage, courtesy of a tape-to-tape stretch pass from Fox as he exited the box. Zerter-Gossage fended off the defenseman pursuing him to chip the puck over Daccord’s blocker.

The Sun Devils had been inching closer through the second half of the game, piling shots on Lackey’s net as several Crimson players were whistled for minor infractions. The fourth goal late in the third frame put victory for the visitors out of reach.

“We had good times, bad times, I think we still need to sharpen things up,” Zerter-Gossage said. “It’s definitely something to build off of.”