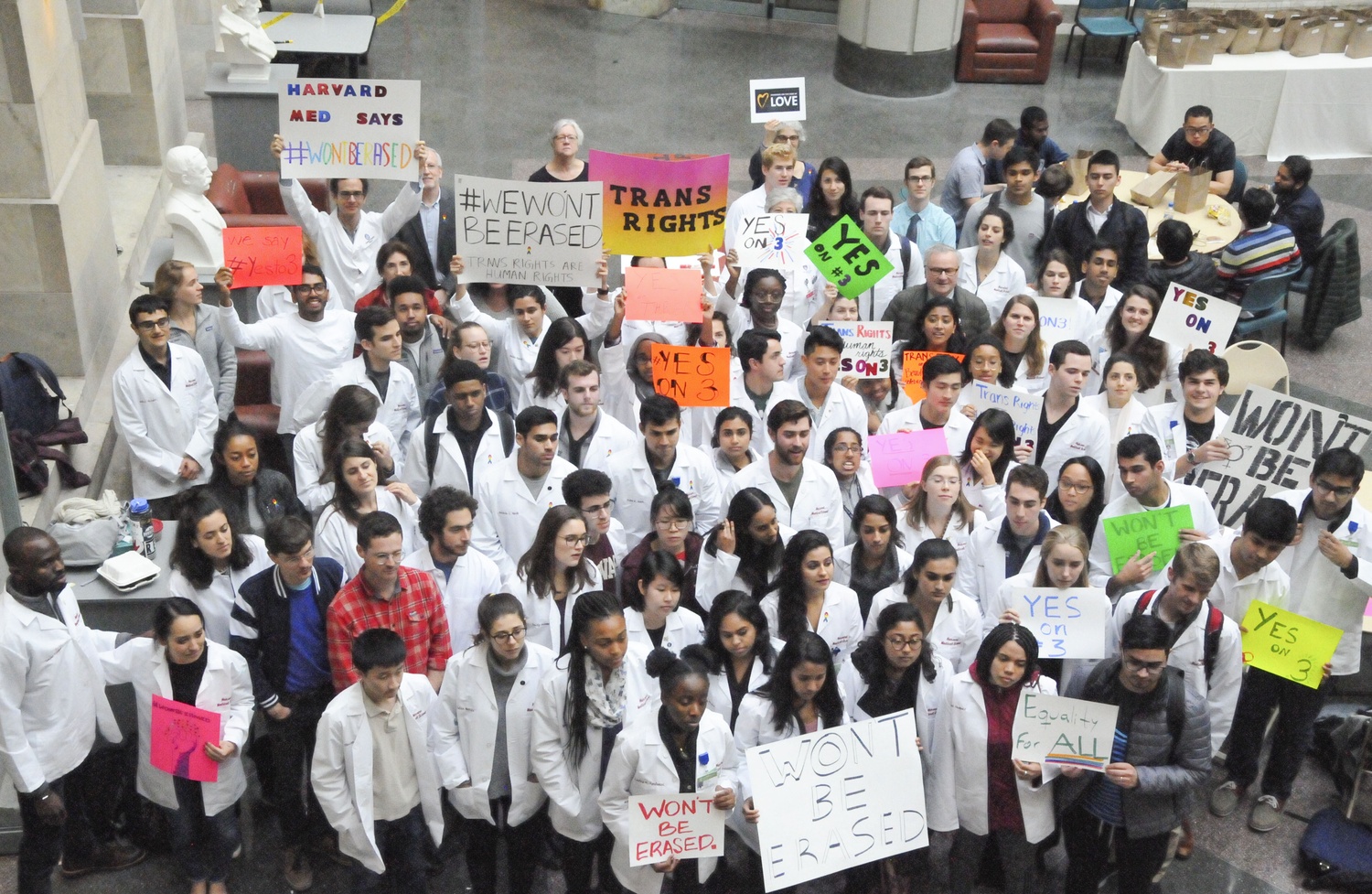 Students at Harvard Medical School demonstrate in support of transgender rights in the Tosteson Medical Center atrium on Thursday. By Mia B. Frothingham
By Sahana G Srinivasan and Luke A. Williams, Contributing Writers

If the Trump administration enacts this new definition, it would eliminate federal recognition of the roughly 1.4 million Americans who identify as a gender that does not match the biological sex with which they were born.

The Department of Health and Human Services could not immediately be reached for comment late Thursday night.

Vild wrote in the statement that the proposal “demonstrates blatant disregard for federal civil law protections of transgender people.” The school vowed to protect the rights of transgender, nonbinary, and gender nonconforming patients throughout the school’s medical system.

“Throughout our community, HMS clinicians provide individualized care to transgender, nonbinary, and gender nonconforming patients with sensitivity and respect. We will continue to do so as we fight to protect the rights of our patients. We will defend our values both as clinicians and as members of a civil society that treats everyone with dignity. We will be unwavering in safeguarding the rights of individuals regardless of sex, gender, gender identity, and sexual orientation,” the statement reads.

The School’s announcement came on the same day that Harvard medical and dental students gathered on campus to protest the proposal. 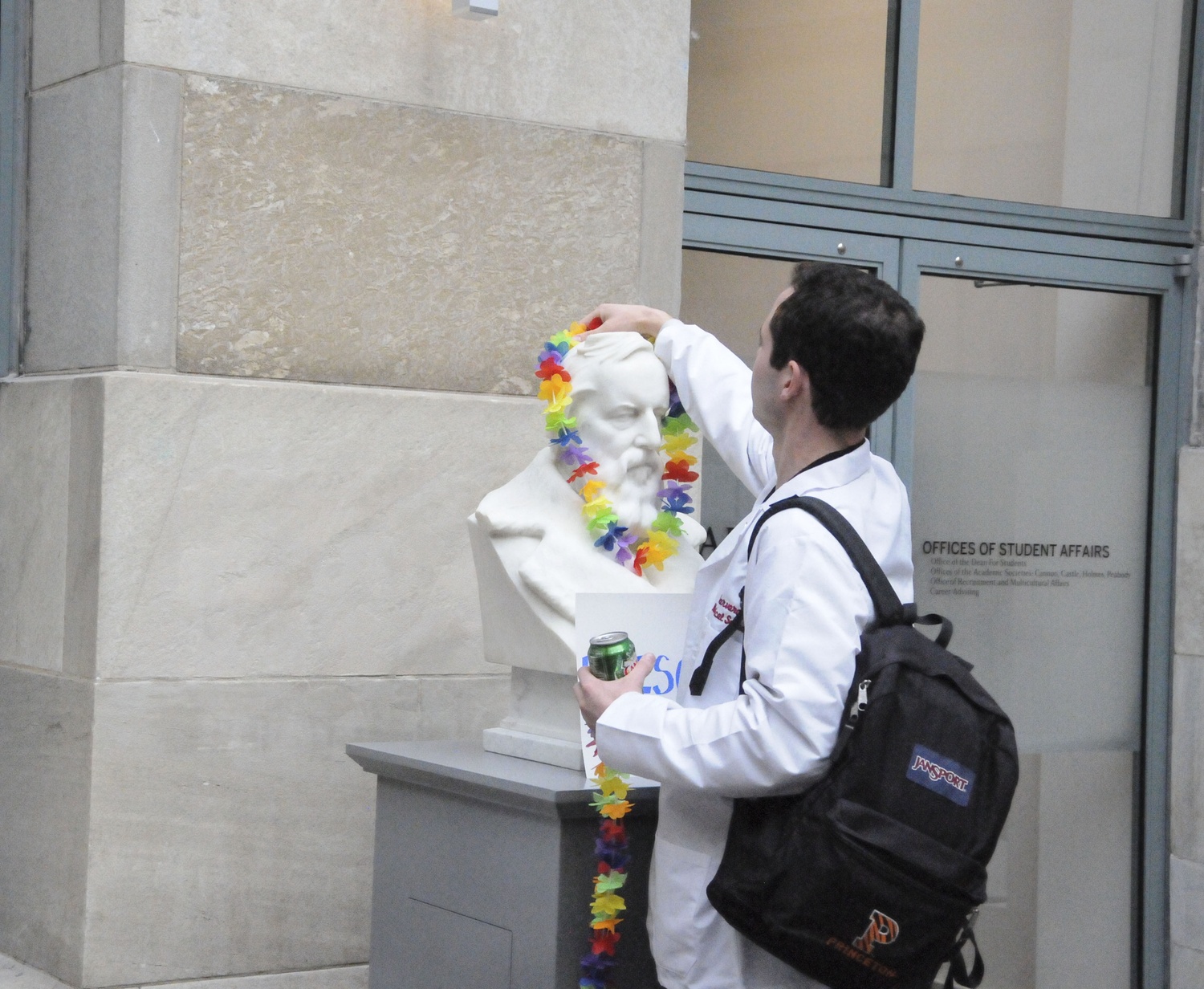 A Harvard Medical School student places a rainbow lei over a bust during a protest advocating for transgender rights at the Medical School on Thursday. By Mia B. Frothingham
Advertisement

The LGBTQ and Allies of Harvard Medical School and Harvard School of Dental Medicine and the Racial Justice Coalition at HMS planned Thursday’s protest as a part of a national movement held in coordination with other medical schools. The Medical Student Pride Alliance — a national BGLTQ medical student initiative — encouraged medical schools across the country to organize on Nov. 1 to demonstrate support for transgender rights.

During the demonstration Thursday, roughly 100 Harvard medical students donned white coats and scrubs in Tosteson Medical Center Atrium and lofted posters reading “Won’t be Erased” and “Equality for All.” The protest culminated in a group photo taken and posted online in support of the national demonstration.

The participating students also chanted “Yes on 3” as they posed for their photo, referencing their support for Question Three on the Massachusetts voting ballot this year. The question asks whether current gender anti-discrimination protections should be retained.

“We don’t want biological science to be misused as a tool for hatred and bigotry,” first-year medical student Alison E. Farrar said.

Some protesters, like first-year medical student Jade A. Connor, saw the protest as particularly pertinent for students of medicine.

“It’s important to acknowledge the reality that biological sex and gender are not the same thing and to deny those things is just not factually correct, but then it’s also going to lead to the detriment of our patients,” Connor said. “We’re just all here to stand with them and to show solidarity as a medical community.”