For the first time, Madison Square Garden will play host to the storied hockey rivalry between the Crimson and the Big Red.
By Stuti R. Telidevara 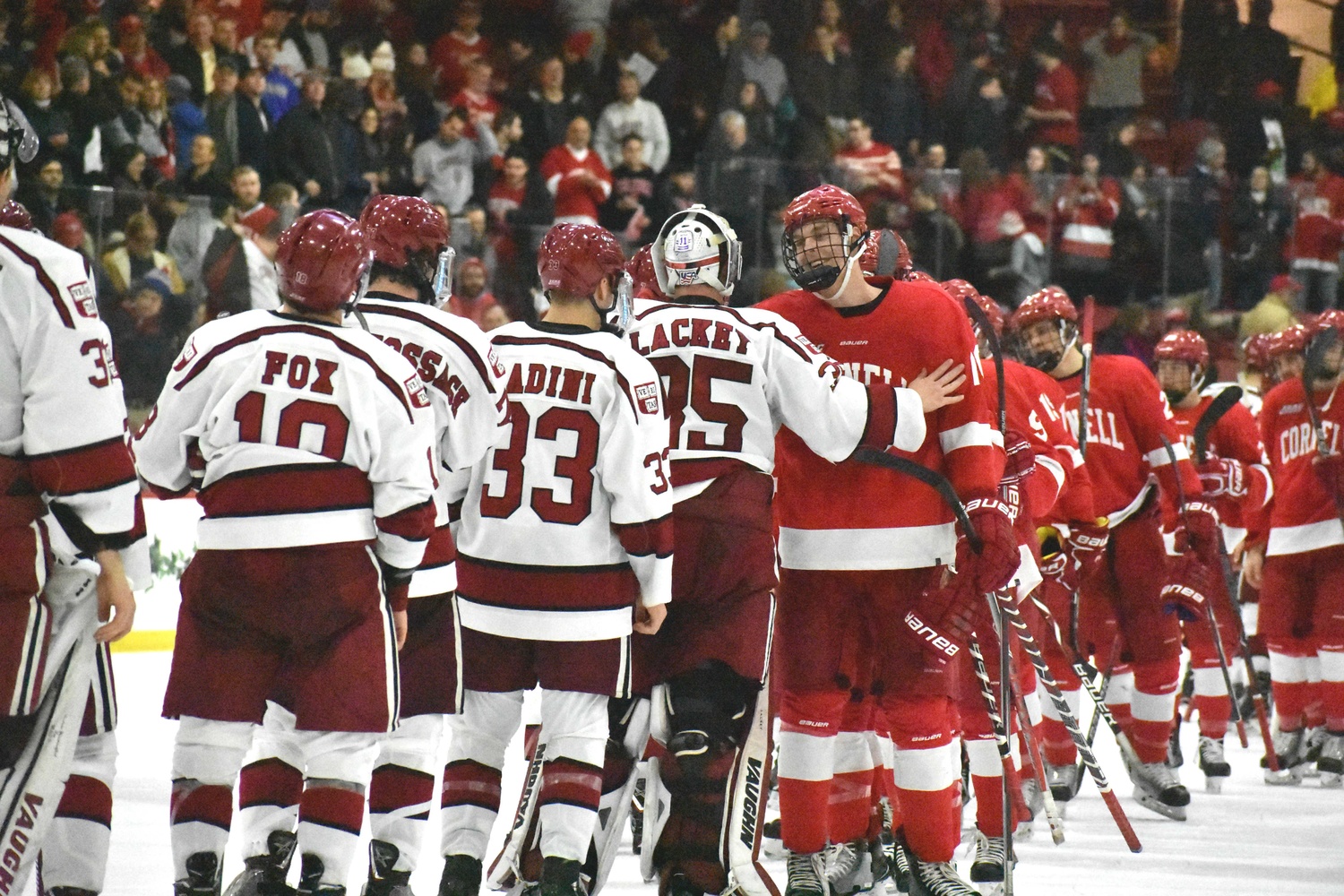 In 2017-18, Cornell swept Harvard in two meetings; in 2016-2017, the Crimson defeated the Big Red in three clashes. This time, the two teams will see each other at least thrice to decide which squad comes on top. By Amanda M. DiMartini

On Saturday, the storied clash between the Harvard men’s hockey team and archrival No. 15 Cornell will add a new chapter to its book — and a new stage. In its first date with the Big Red (5-3-0, 3-1-0 ECAC) and fourth matchup against a ranked team this season, the Crimson (2-3-2, 1-2-2) will skate at Madison Square Garden, the National Hockey League’s oldest arena.

MSG is far from a foreign setting for Harvard’s coaching staff, as the team has played there thrice since the appointment of current head coach Ted Donato ’91 in 2004; neither is it a new venue for Cornell. But this weekend will be the first time the Garden plays host to this particular college hockey rivalry.

“What do they refer to MSG as, the ‘world’s most famous arena’?” said coach Donato with a smile. “In the broadest sense, college is about having great experiences, and exposing yourself to different challenges, and opening your mind to different things. For our guys to have an opportunity to play at Madison Square Garden in [front of] what would most likely be an excellent crowd, I think, is a great life experience.” 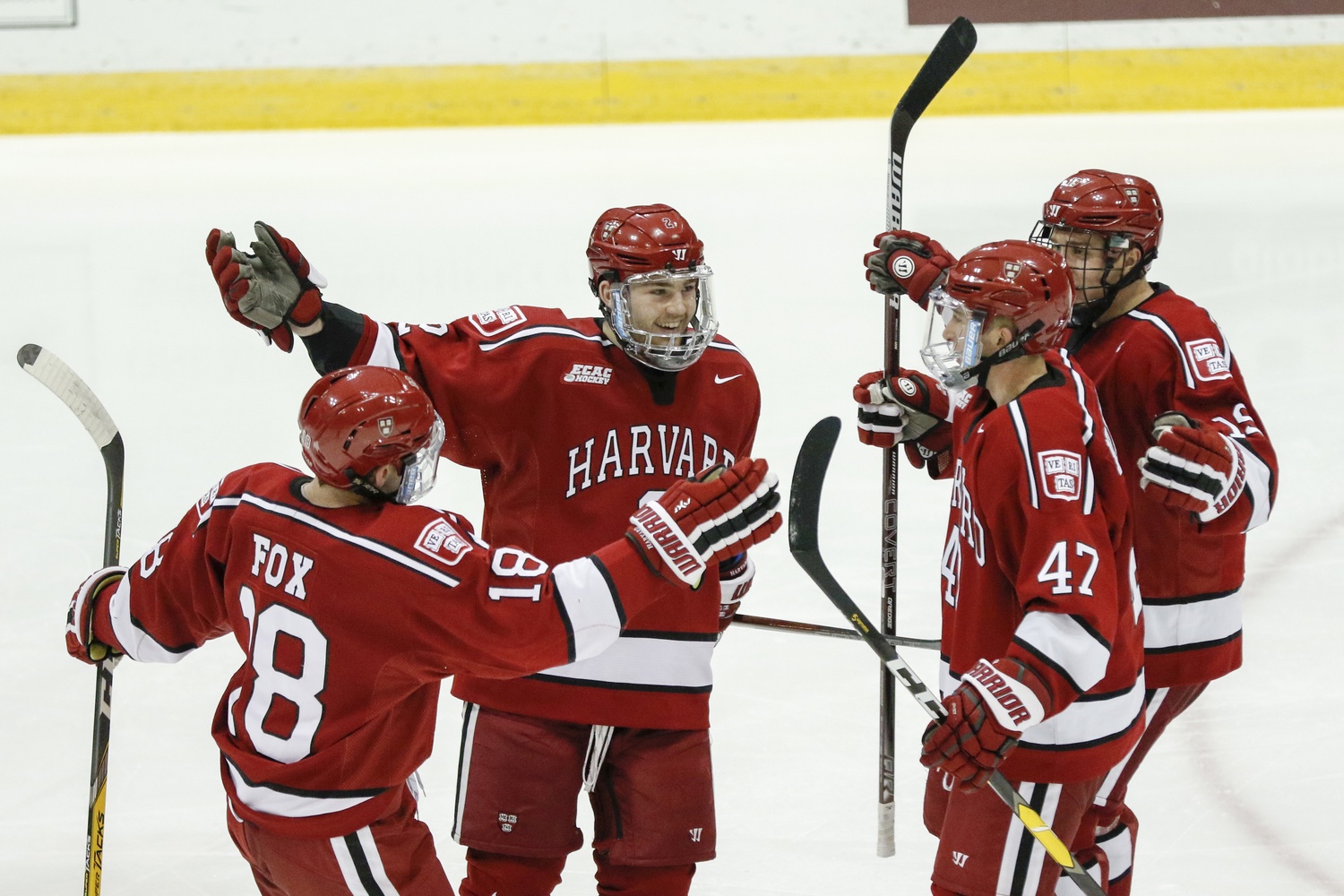 The Crimson and its top-ranked power play will face off against Cornell in its quest to break a three-game losing streak at the NHL's oldest arena. By Timothy R. O'Meara

Experience aside, the Crimson has a significant challenge ahead in its opponent, and will no doubt be looking for revenge. Last season, the Big Red won both contests between the teams, including a thriller in Ithaca, N.Y., that was decided by a Cornell goal 2.6 seconds before the buzzer. This season’s schedule will allow Harvard three chances at payback, as Saturday’s MSG game is a neutral, non-conference one. And whatever its outcome, both squads get a second go the very next week, when the Big Red visits Bright-Landry.

“We don’t really get to do that that often, where you’re playing a team one weekend and then you see them the next,” said co-captain and forward Michael Floodstrand. “It’ll be nice to get them Saturday night and then have a chance to look at the video, then kind of be acclimated where there’s ECAC and Ivy League points on the board.”

Cornell currently sits at third in the ECAC, having just bested No. 18 Princeton, 5-1, in a clash of the conference titans. While the players that put the daggers in last year’s series sweep have graduated, the Big Red still returns several skaters who have made their mark against the Crimson, like junior defenseman Yanni Kaldis and senior forward Mitch Vanderlaan.

Leading scoring for Cornell is Kaldis (4–5—9) himself; pacing the team in goals is sophomore forward Morgan Barron (5–2—7). The biggest threat is in net: sophomore goaltender Matt Galajda, who shut out Harvard in its rink and was the country’s best net-minder last year (21-5-2, 1.51 GAA, .939 SV%). 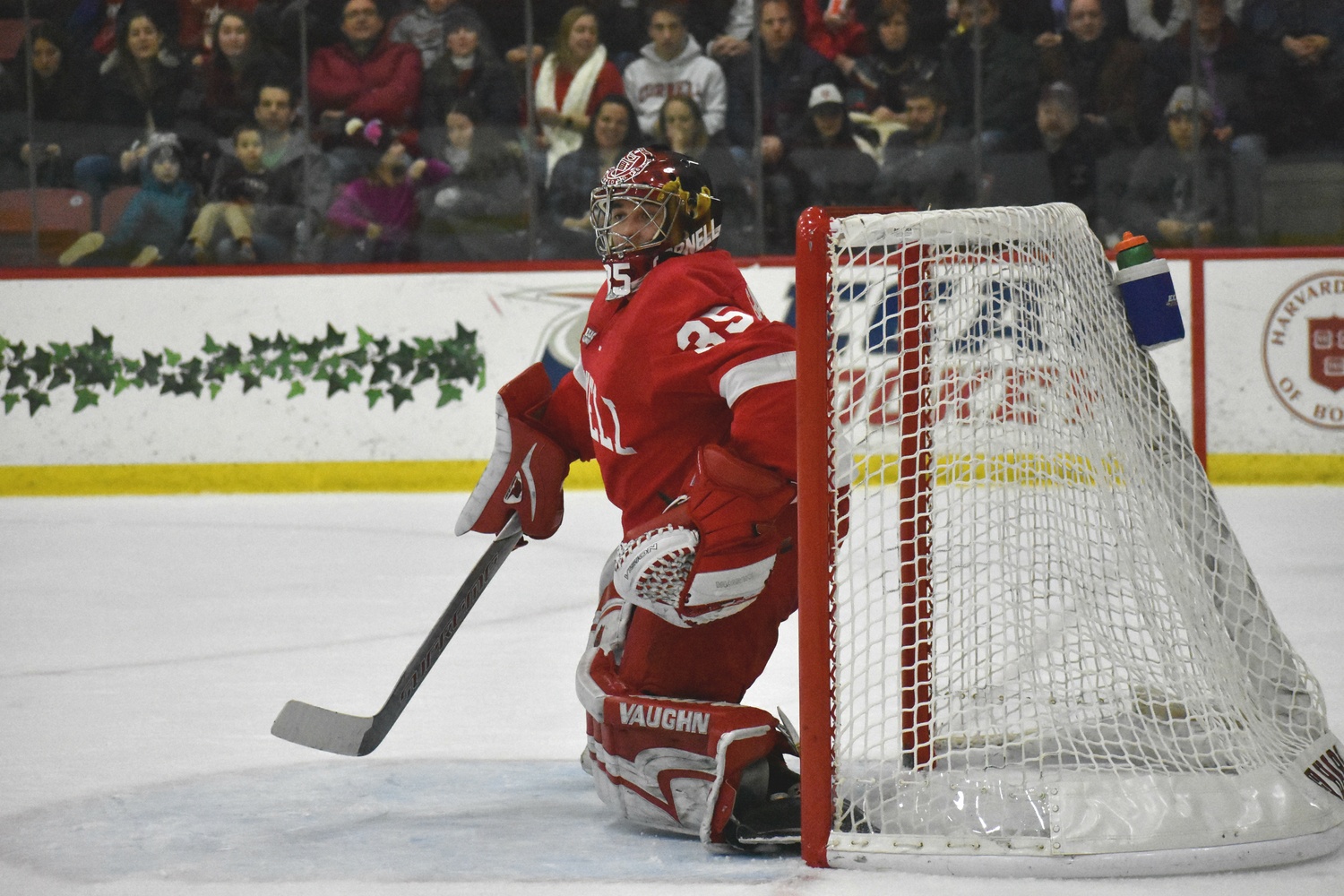 In last season's clash at Bright-Landry, Big Red goalie Matt Galajda, then a rookie, turned away 35 shots to shut out the Crimson. By Amanda M. DiMartini

“They obviously have a really good goalie, and team defense in general is pretty strong,” sophomore defenseman Reilly Walsh said. “I think they play us very hard, as most teams do, but just especially ’cause it’s Harvard-Cornell…. But obviously they’re beatable. I think we’re pretty fired up because of what happened last year, not beating them at all.”

A source of optimism for the Crimson heading into Saturday could be that Galajda’s formidable numbers have fallen (2.52 GAA, .885 SV%). The Big Red’s team goals-against per game has risen (2.62) since last season’s NCAA-best 1.58. In contrast Harvard’s goals-for per game is on the up, and at 3.86 is good for fifth in the nation. Still, the Crimson will need to bring all its speed and scoring skill if it hopes to crack Cornell’s solid defense.

Key to that speed and skill are junior defenseman Adam Fox (3–12—15), who leads the team in scoring and whose 2.14 points per game pace the NCAA, and co-captain and forward Lewis Zerter-Gossage, whose five goals pace the team. His recent four-point weekend earned Zerter-Gossage ECAC Player of the Week accolades; carrying that hot streak forward could prove a short- and long-term reward for Harvard. The Crimson also has a potent offensive weapon in the most efficient power play unit in the country (36.4%). But the team hasn’t had the best record when it comes to striking first this season. 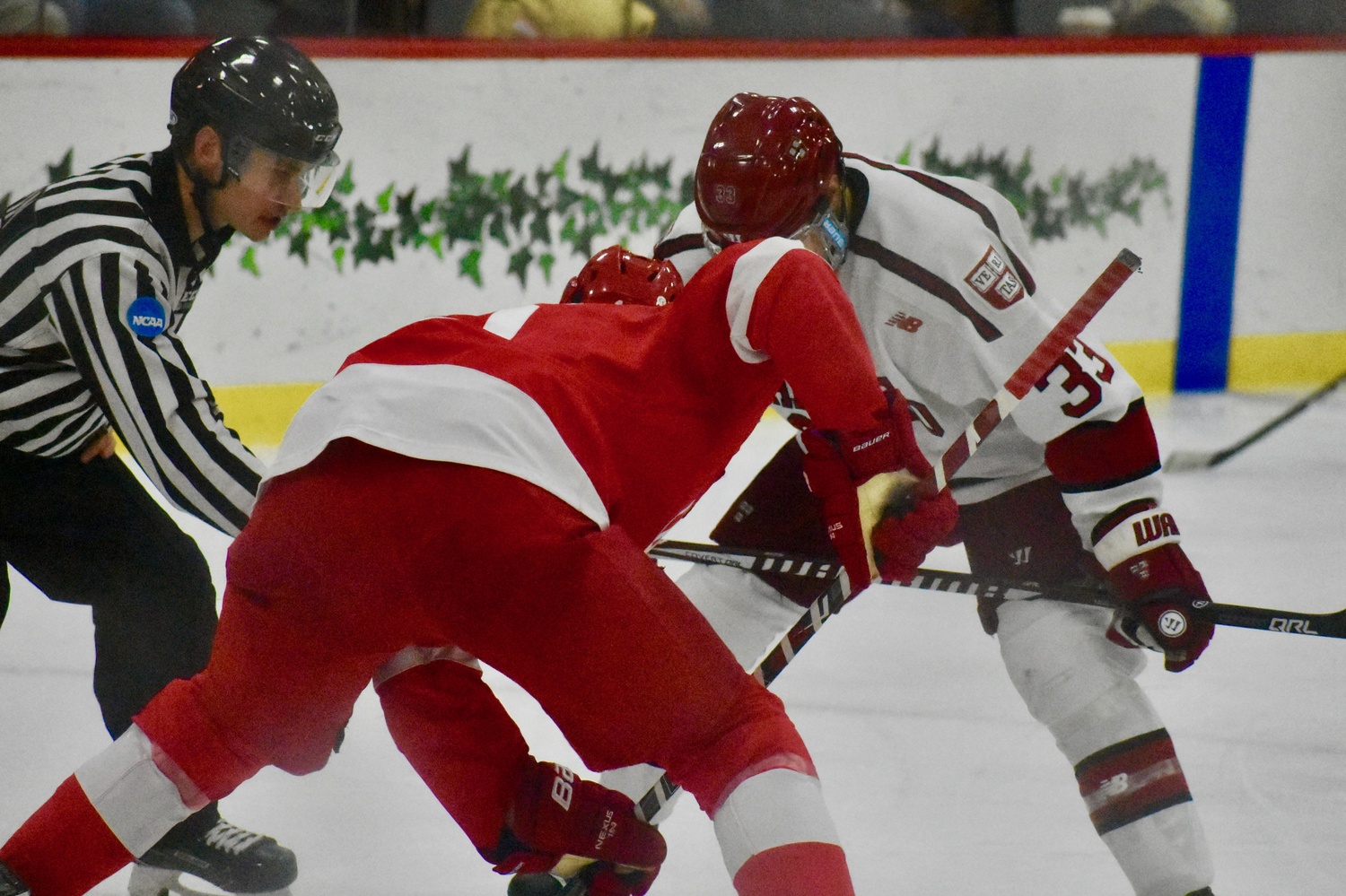 With an efficiency of 74.3%, sophomore forward Jack Badini is the best faceoff man in the NCAA. By Amanda M. DiMartini

“We just have to play our game for a full 60,” Walsh said. “If we play a full 60 I think not a lot of teams in this league can play with us when we’re consistent…. It’s going to be a huge first period on Saturday, to get the first goal and get the lead, and I think with [the Big Red], once they get a lead they rarely give it up.”

Despite its success in team scoring thus far, Harvard is also a bottom-10 squad in terms of goals against. Senior net-minder Michael Lackey has now started five straight games; while his season numbers are less than ideal for the squad (2-2-2, 3.23 GAA, .880 SV%), that stretch did contain strong performances, including a 4-1 win against No. 18 Arizona State (1.01 GAA, .968 SV%). Saturday also won’t be Lackey’s first time lacing ’em up at MSG, as he and some other members of the senior class played in 2016’s Rivalry on Ice clash against Quinnipiac, skating to a 5-4 overtime loss.

In tightening up team defense the Crimson will also look to prepare for the high intensity of a Cornell clash and the big stage of an NHL arena. On Wednesday, the team practiced at Warrior Ice Arena, the practice facility of the Boston Bruins, and will continue its regular practice schedule over Thanksgiving break. After an afternoon off for time with family — for out-of-town students, a meal at a local teammate’s house — the players will get ready to head to New York City on Friday morning. 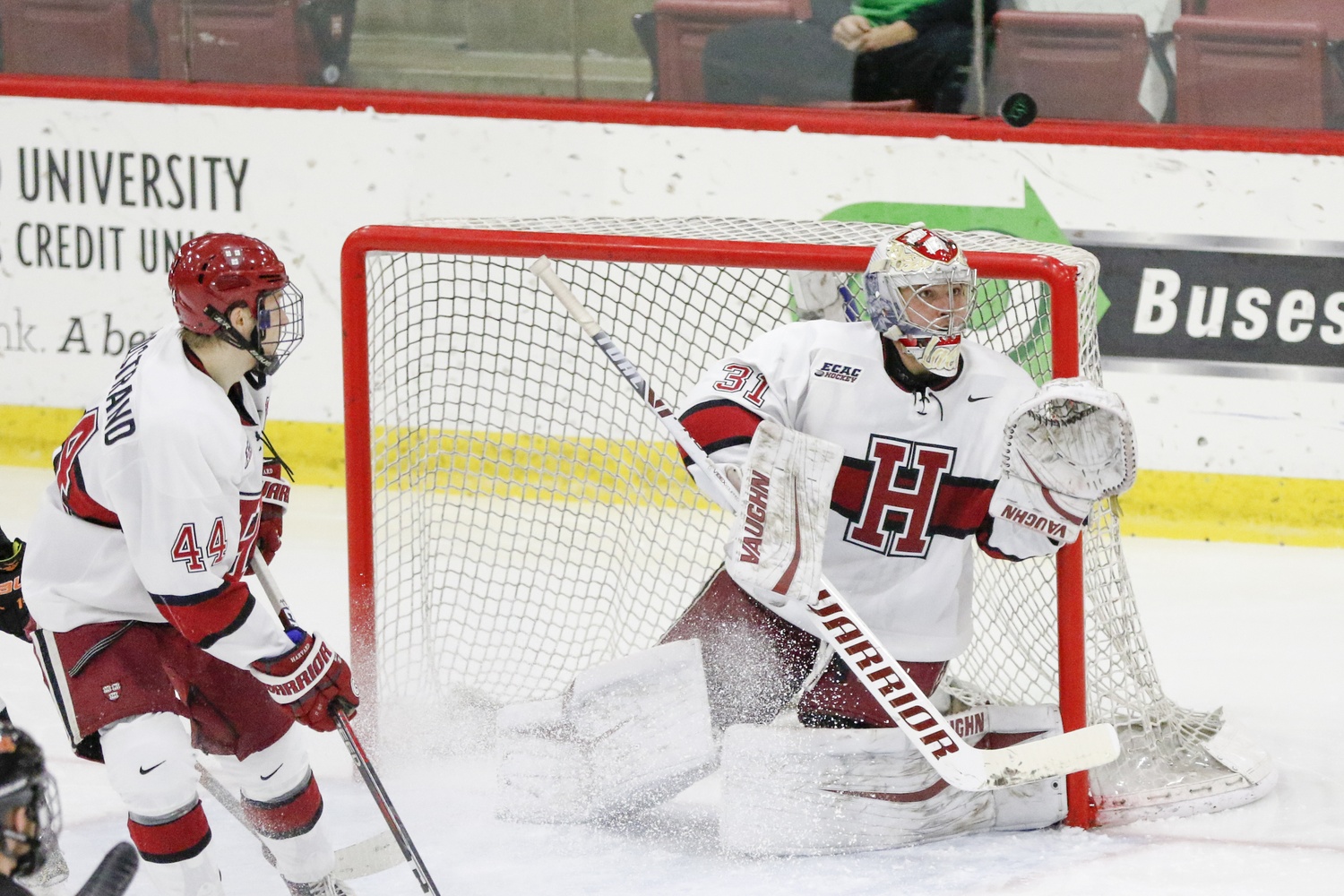 This will not be the first time senior net-minder Michael Lackey tends net at Madison Square Garden. In his freshman year, Lackey was beaten in overtime, 5-4, by Quinnipiac. By Timothy R. O'Meara

The bottom line for Harvard, though, is maintaining an upward trajectory heading into December. Floodstrand believes the team is on its way there already.

“We might have had a rough start numbers-wise, but it’s a long season,” Floodstrand said. “We’re going to be one of those teams, I think, [that] in December, January, February really takes stride and gets hot going into playoffs. I’m happy with the progress we’ve made; we’ve definitely had a few tough games that we wish we could take back but that stuff’s behind you.”

For coach Donato, who spent a season with the New York Rangers towards the end of his professional career, visiting Madison Square Garden is also a bit of a homecoming. In his three trips there as a coach, though, the Crimson has come away with three losses. The Big Red, on the other hand, have been undefeated in its five contests at MSG since 2013. Starting at 8 p.m. on Saturday, Harvard will aim to break both those streaks at once.