The Crimson ousted the Big Red on the backs of its young, speedy forwards and sturdy goaltending from senior Michael Lackey.
By Spencer R. Morris 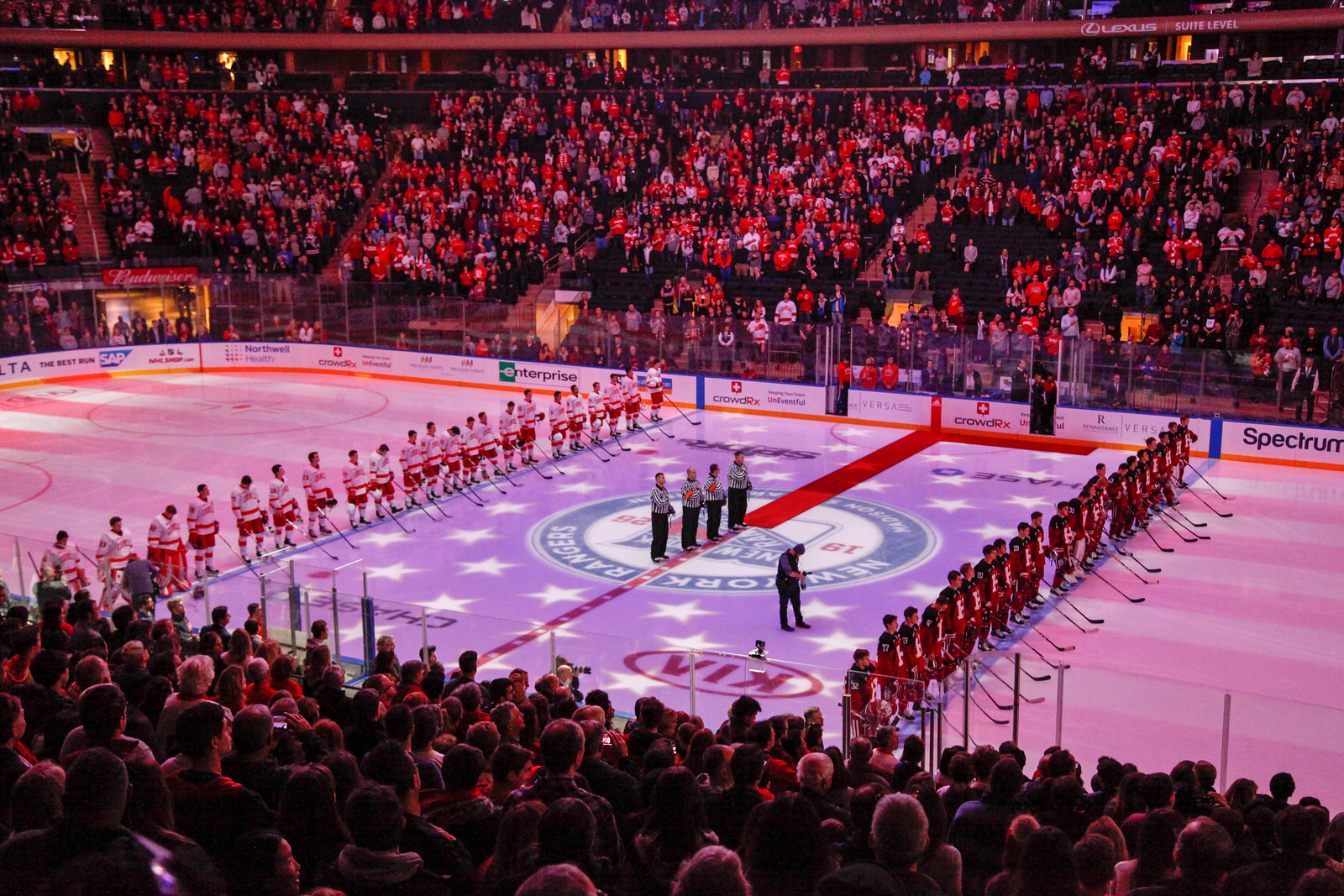 Storied rivals Harvard and Cornell met at Madison Square Garden for the first time in their 153-game history. By Timothy R. O'Meara

NEW YORK — For some, turkey, football, and family were not the only things to look forward to during Thanksgiving break. On Saturday night, the Harvard men’s hockey team dueled its most intense rival, No. 15 Cornell, in the historic setting of Madison Square Garden.

The Crimson (3-3-2, 1-2-2 ECAC) ousted the Big Red (5-4-0, 3-1-0) on the backs of its young, speedy forwards and sturdy goaltending from senior Michael Lackey. Cornell’s defeat marks its first loss at the Garden since 2013, and the Harvard victory reverses losing trends both against Cornell and in tilts at MSG.

“We used our speed to get back to some pucks,” Crimson coach Ted Donato ’91 said. “I thought Michael Lackey did a nice job of getting some stops back there that allowed our [defense] to make one good solid play.”

With six minutes remaining in the bout, Harvard found itself protecting a 2-1 lead. But the Crimson had plans to pad its advantage. 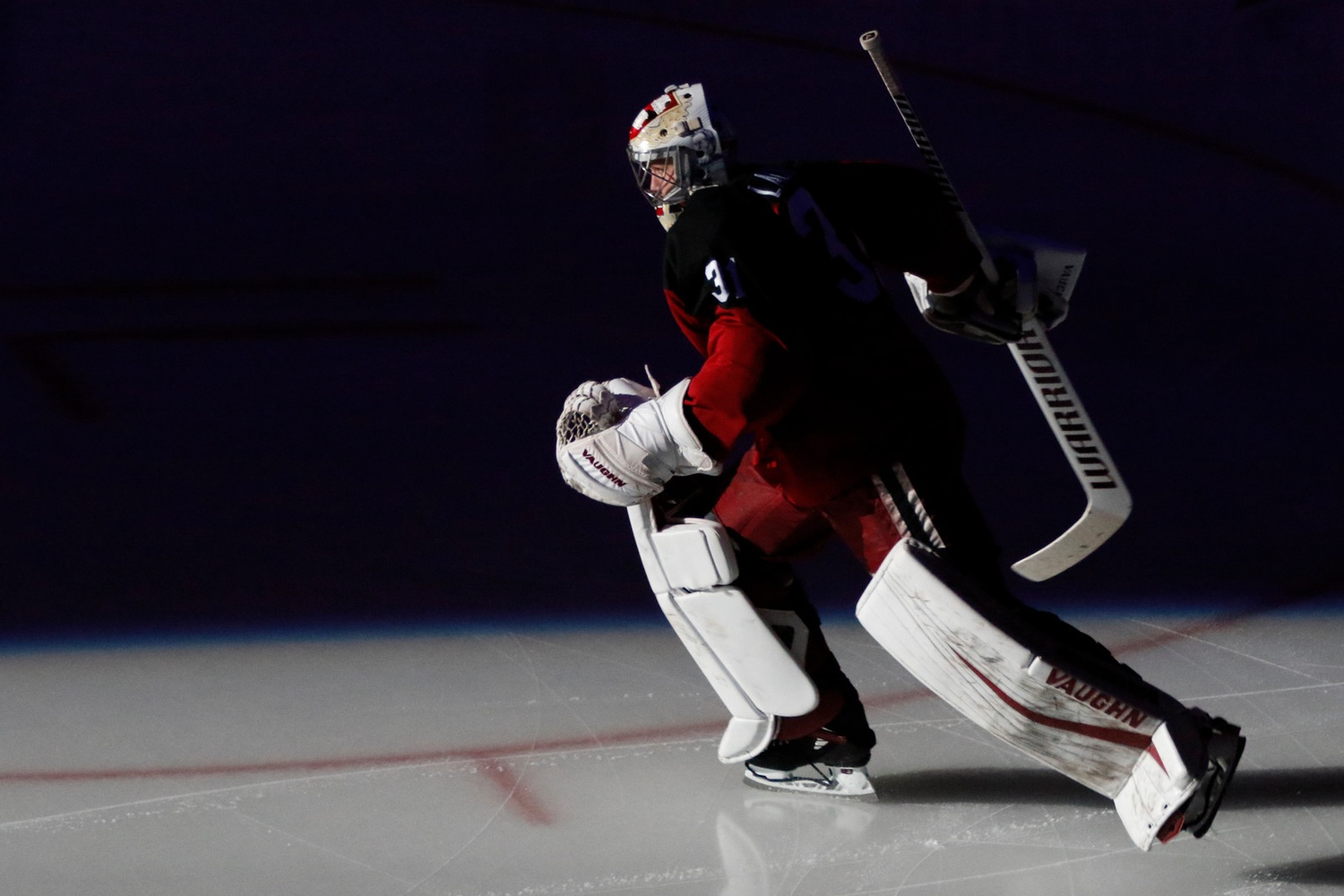 Michael Lackey (1 GA, .968 SV%) stood tall in net for the Crimson, making multiple big-time saves to keep his team in the game. By Timothy R. O'Meara

Sophomore forward Henry Bowlby took off from mid-ice and beat a defenseman to a loose puck. Striding into the zone, he broke in alone on sophomore net-minder Matthew Galajda and slipped a backhand shot through his five-hole, providing his squad with a two-goal security blanket.

With a minute left, an empty-net goal from junior defenseman Adam Fox sealed the win.

“Everyone knew how special it was to play at Madison Square Garden,” Lackey said. “During the game, you’re kind of focused on getting the win. But towards the end, once we got the empty-net goal, just taking a step back and looking around and seeing all the [sad] Cornell fans — it was definitely a sight.”

A slow start to the game left Harvard displeased with its play entering the middle frame. The Crimson needed an injection of energy, and it received it from none other than co-captain Lewis Zerter-Gossage. 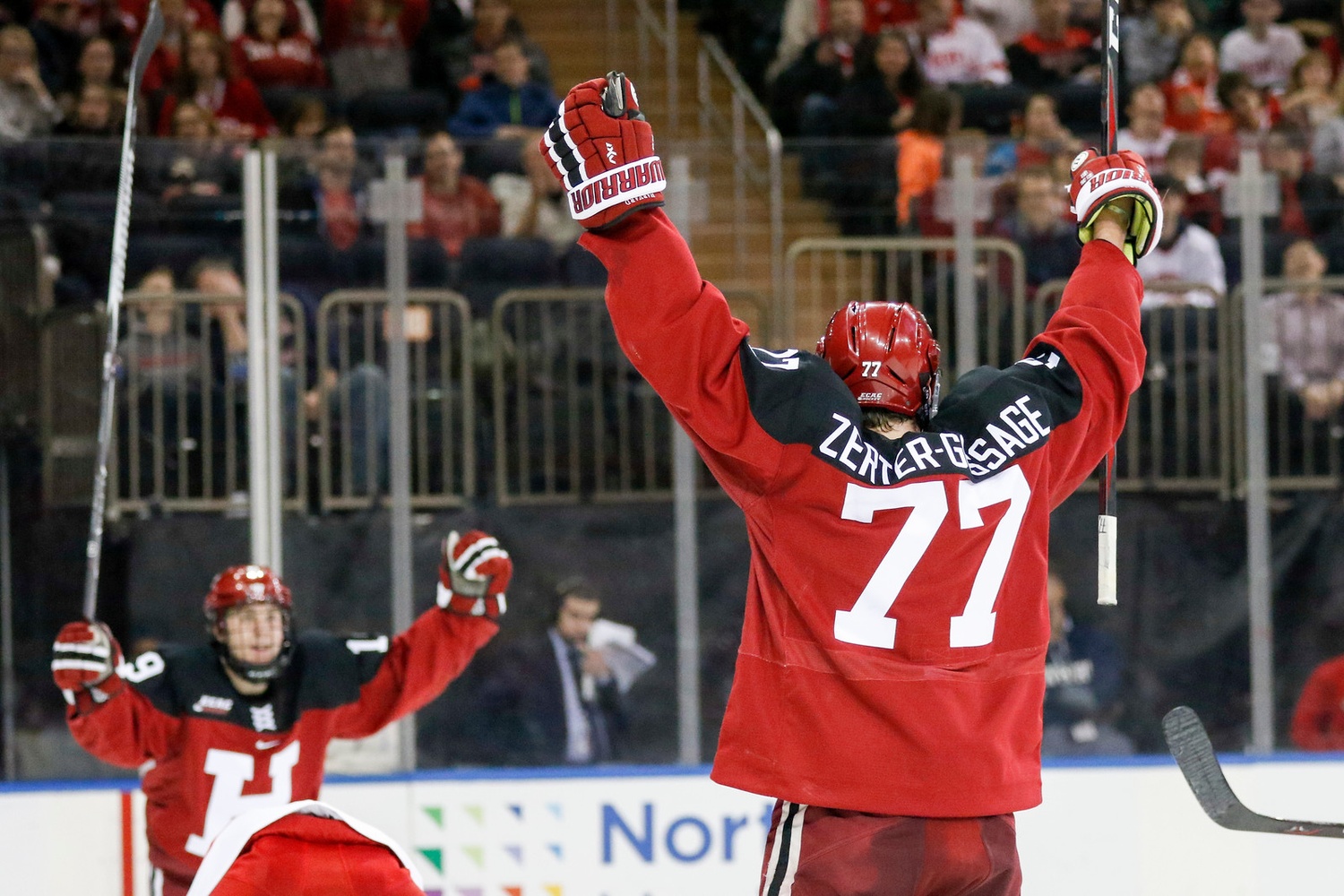 Co-captain Lewis Zerter-Gossage provided the spark that Harvard needed with a powerplay goal in the middle frame, equalizing the tilt at 1-1. By Timothy R. O'Meara

Not even four minutes into the second period, freshman forward Casey Dornbach fired a puck toward the net from the left circle. After Galajda was unable to corral the rebound, Zerter-Gossage found the loose puck and ripped it home under the goalie’s pads.

“It’s always tough going down 1-0, especially early on in the game,” Lackey recalled. “We kept grinding, we kept working, and we got the result. Once [Zerter-Gossage’s goal] happened, everybody really bought in and got behind the momentum.”

The powerplay strike, Zerter-Gossage’s sixth of the season, proved to be the offensive spark that Harvard needed. Less than six minutes after the equalizer, Dornbach earned another apple, this time zipping a cross-crease feed to Bowlby, who buried the open-net chance. 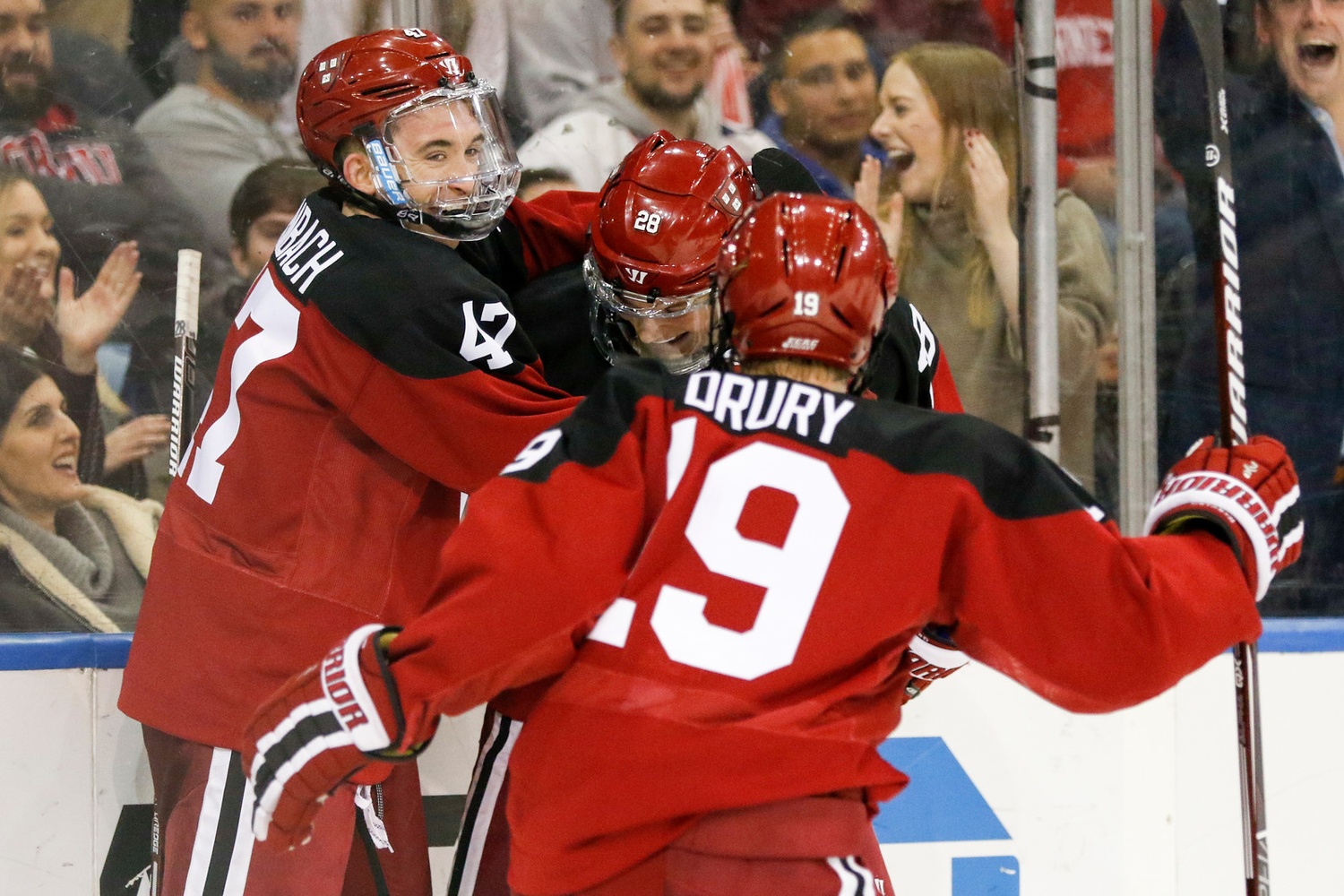 The line combination of Henry Bowlby, Jack Drury, and Casey Dornbach has been the Crimson's most effective in the early portion of this season. By Timothy R. O'Meara

The trio of Bowlby (3–1—4), Dornbach (2–10—12), and freshman center Jack Drury (2–7—9) continues to be the most effective line among the Crimson forwards. Bowlby potted a pair of pucks on Saturday night, and Dornbach finished with three assists. Production from a relatively young attacking unit is paramount to Harvard’s team success this season.

Cornell coach Mike Schafer held his own team accountable for the success of the Crimson’s quick, young forwards.

“They got good speed, but any team — if you’re not playing the right way, not being physical, staying above people — every team is going to look fast,” said the bench boss after the game. 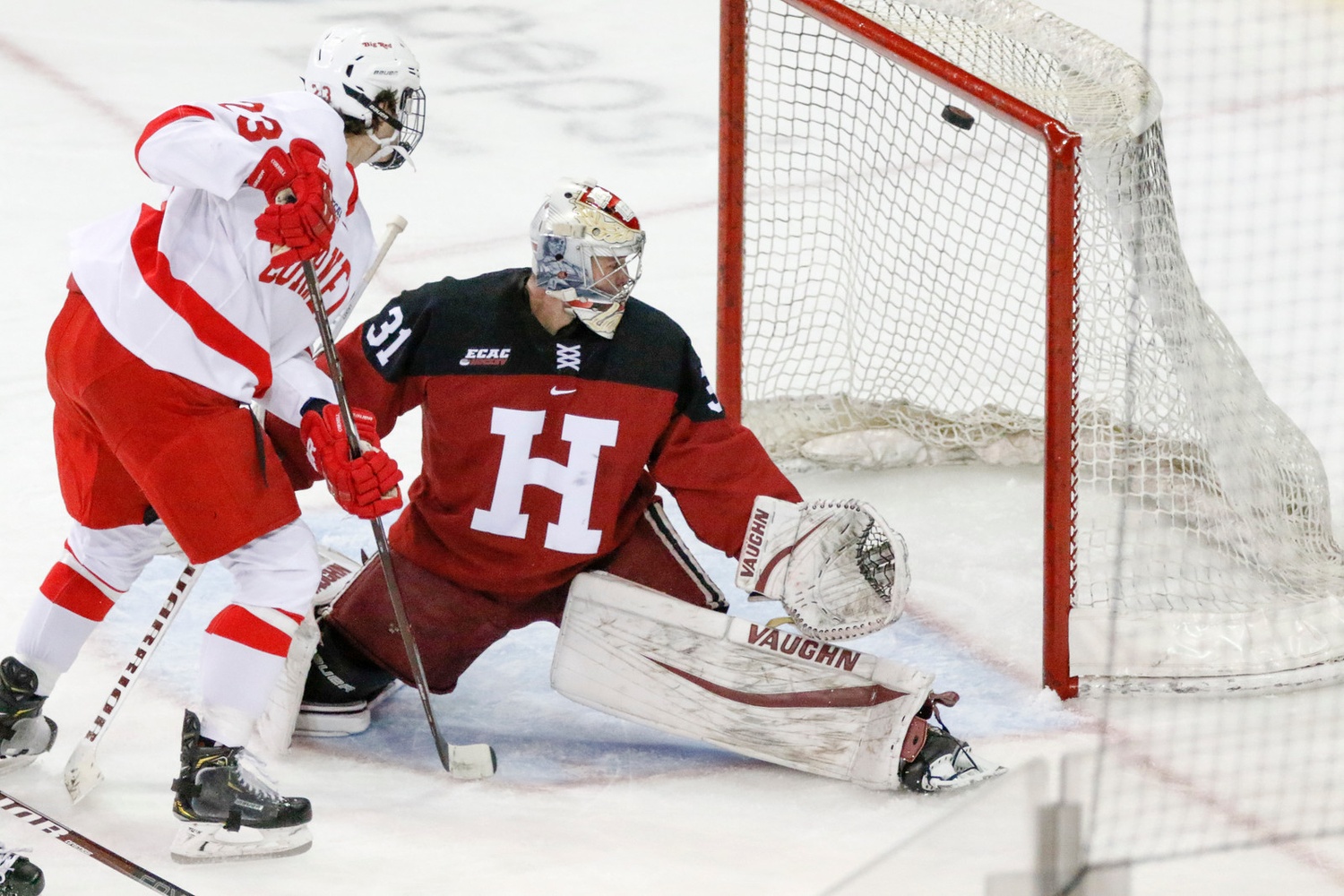 Just as in Harvard’s past three MSG appearances, the opposing team opened the scoring on Saturday night. Big Red blue-liner Alec McCrea fired a wrist shot from the left point, and freshman forward Liam Motley redirected the senior’s shot past Lackey. Motley’s first-career tally ushered in roars from the Cornell-leaning crowd, which grew less enthusiastic as the contest progressed.

Otherwise, Lackey (1 GA, .968 SV%) shone between the pipes. In his strongest performance of the young campaign, the senior made multiple big-time saves to keep his Crimson in the game. His confidence permeated the skaters in front of him.

“Lackey gave us a couple saves at some key times,” coach Donato lauded. “When we scored the first goal, it kind of just settled us in a little bit. As the second wore on, our speed started to show up a little bit.”

On the other end of the ice, Galajda (3 GA, .885 SV%) was more porous, although he had little hope of making the save on both Bowlby tallies. Nevertheless, Lackey thoroughly outdueled his masked counterpart en route to victory. Through nine starts this season, Galajda has failed to attain the impressive numbers he posted in his freshman campaign (20-5-2, 1.51 GAA, .939 SV%). 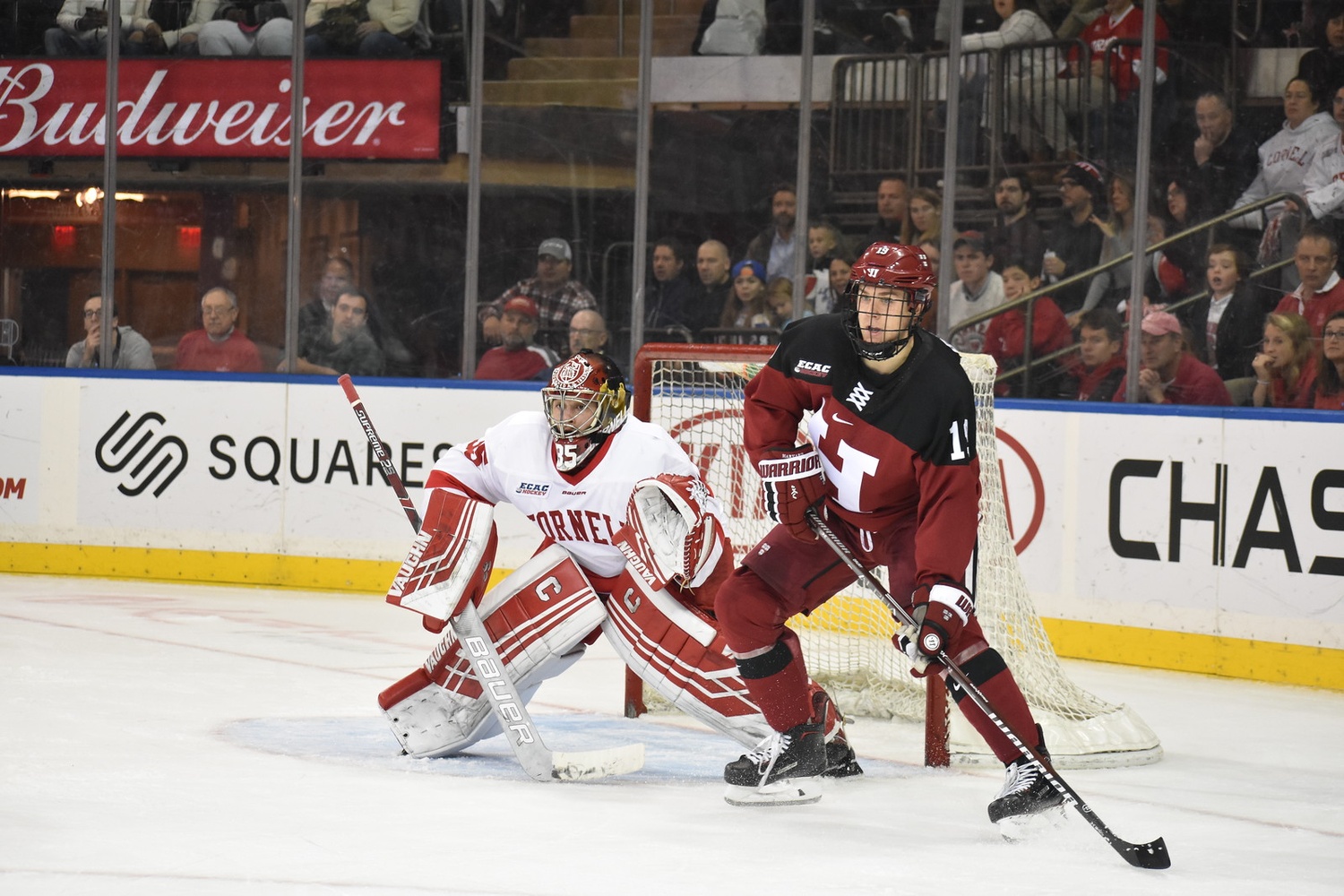 Sophomore Matthew Galajda has emerged as one of the premier backstops in the ECAC. On Saturday, he faced formidable competition across the ice in Michael Lackey. By Amanda M. DiMartini

The two teams will not have to wait long to overwrite the latest chapter in their rivalry. Next Saturday, Cornell will trip to Cambridge for a rematch with its MSG conqueror. This time, however, the game will have conference implications. Fans can also expect the Big Red to reestablish its effective forecheck and usual competitiveness.

Until then, Harvard will enjoy its first victory over Cornell since the 2016-2017 season and will leave New York feeling more confident about its play.

“We dug ourselves into a little bit of a hole with our start,” coach Donato said. “But I think tonight was a great step in the right direction.”