The Crimson has surpassed the .500 mark for the first time this season and appears to be clicking on multiple fronts heading into a campaign-defining game against No. 16 Cornell on Saturday night. 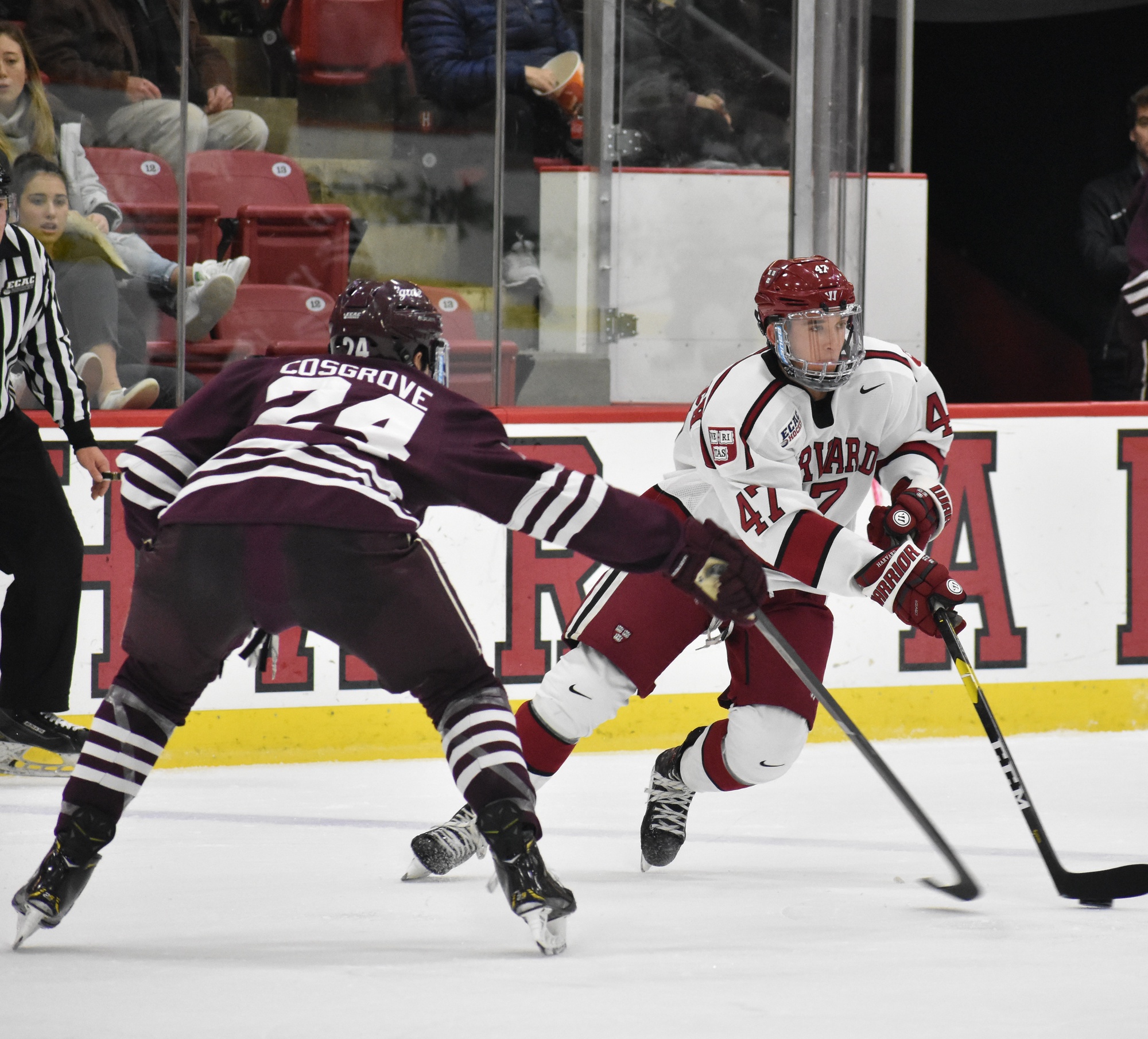 Freshman Casey Dornbach showed off his speed and skill, picking up his second straight three-assist night. He now sits at second in the NCAA in assists per game — right behind Fox. By Amanda M. DiMartini
By Spencer R. Morris, Crimson Staff Writer

For the Harvard men’s hockey team, a 6-1 victory over Colgate on Friday night has many of the same storylines as its win over Cornell last week: co-captain Lewis Zerter-Gossage lit the lamp, defenseman Adam Fox and forward Casey Dornbach were all over the scoresheet, and goaltender Michael Lackey posted a solid outing.

The visiting Raiders (3-8-1, 1-3-1 ECAC) fell victim to a Crimson squad (4-3-2, 2-2-2) that is beginning to fire on multiple cylinders. Harvard sits above the .500 mark for the first time in the young campaign after picking up two valuable conference standings points in the decisive triumph.

“Some of our key guys stepped up and made some plays,” Crimson coach Ted Donato ’91 said. “Zerter-Gossage with two goals and [Adam Fox] with a couple of high-end plays. That was really the difference in the game.”

Harvard entered the middle period with a one-goal lead. The home team’s stars proceeded to take over, putting the game out of reach for Colgate.

Six minutes into the frame, Fox demonstrated his offensive prowess with a silky fake-shot move around a penalty killer before finding twine on a top-corner snipe.

The junior entered Friday’s tilt atop Division I in points per game and assists per game, and his performance against Colgate (1–2—3) only continued his fiery start to the season, bumping these numbers to 2.22 and 1.67, respectively.

A minute later, Zerter-Gossage potted his second goal of the night after his wrist shot from the right circle squeaked through the pads of freshman goaltender Mitch Benson.

The senior is leading by example on the ice, with Friday’s pair of tallies marking the fourth consecutive game in which he has potted the puck. Zerter-Gossage has six scores in those four contests and paces Harvard in goals with eight.

“I’m just getting good bounces and I’ve been in good spots,” Zerter-Gossage said humbly. “Earlier in the season I had some chances, too, that I didn’t capitalize on, and I felt like it was a matter of time. I think putting them in has been good for the confidence and good for getting the team to where we want it to be.”

Raiders coach Don Vaughan replaced Benson (27 min., 4 GA, .800 SV%) with backup Andrew Farrier after the Zerter-Gossage goal, hoping to rally his bench and cut some of the momentum that the Crimson had accrued. 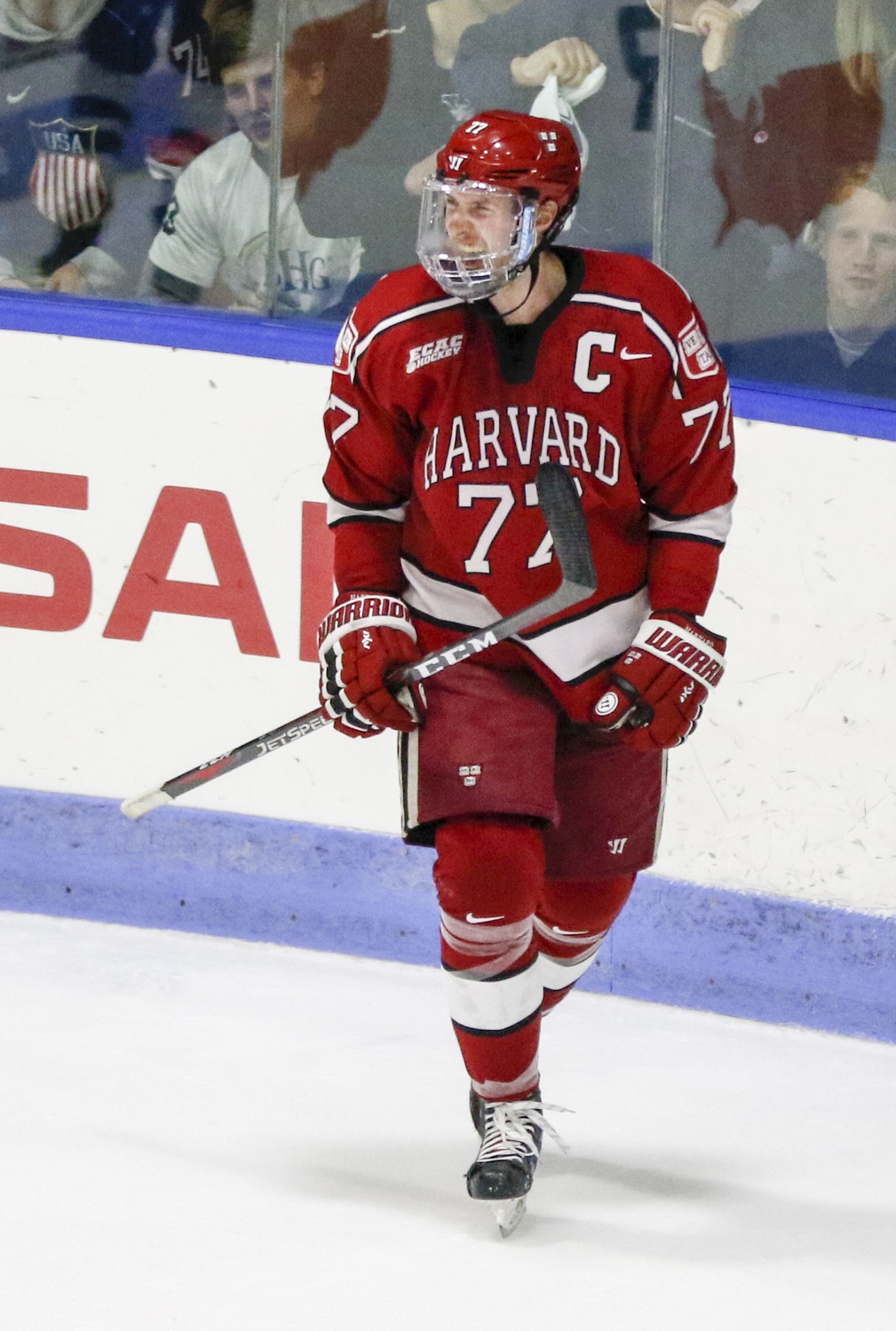 Co-captain Lewis Zerter-Gossage has been on a hot streak, scoring six goals in the past four games. By Timothy R. O'Meara

Despite Colgate competing early in the contest, the Crimson’s high-octane second frame tilted the ice significantly, producing a skewed 31-12 shot disparity after 40 minutes. The Raiders’ 13 third-period shots were too little, too late to make a dent in the Harvard lead.

While Lackey (1 GA, .960 SV%) was not heavily tested on Friday evening, the relatively light workload may prove valuable in Saturday’s clash with No. 16 Cornell, as the senior will need a strong showing for Harvard to emerge victorious.

“There were games earlier in the year where we felt like we dictated the play, and the result didn’t quite end up as expected,” Zerter-Gossage said. “When you control the majority of the game and end up with that score that you think you deserve, it feels a lot better.”

The Crimson drew first blood on Friday night, courtesy of Zerter-Gossage. Sophomore defenseman Reilly Walsh kept the puck in the offensive zone and fired a wrist shot toward the net from the left point. Benson failed to corral the puck, and Zerter-Gossage buried the rebound on his backhand.

Eight minutes after the senior’s strike, Colgate cashed in on the man-advantage. Senior forward Adam Dauda beat Lackey blocker-side on a wrist shot from the high slot.

A Walsh goal with nine seconds remaining in the first frame stole the lead back for the Crimson as it returned to the locker room after 20 minutes. The tally came on the powerplay, extending Harvard’s man-up goal streak to seven games — the majority of the team’s schedule early on this season.

After Harvard’s three goals with the man-advantage on Friday, the squad has potted multiple powerplay scores in four of its nine games so far this season. The Crimson owns the top powerplay percentage in the country (40.0%) thanks to this early success.

“[The powerplay unit is] moving the puck, and [it’s] using all the options,” coach Donato said. “If you look at it tonight, we scored in different ways…. The key to the powerplay is that everybody is utilized.”

The third period saw Harvard put in two more goals — another man-up strike from freshman center Jack Drury and a redirect from co-captain Michael Floodstrand. By that point, however, the Crimson had skated away with the game. 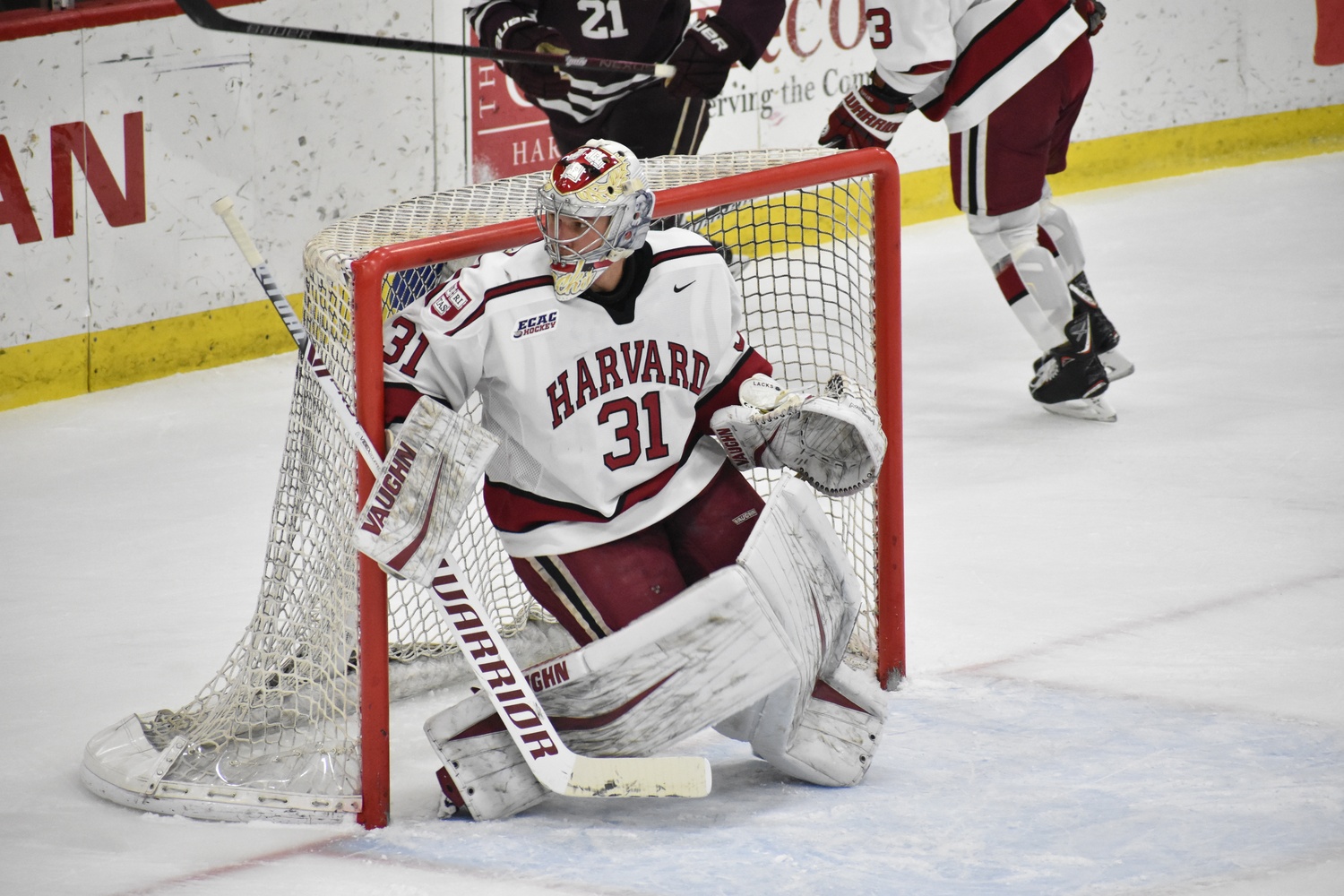 Michael Lackey posted his third over-.960 outing in four games, bolstering Harvard's record and improving upon his own turbulent start to the season. By Amanda M. DiMartini

Harvard freshman forward Casey Dornbach continued to dominate the scoresheet, posting a three-assist game for the second consecutive bout. The Edina, Minn., native now has 15 points (2–13—15) through nine games and sits second in the nation to none other than Fox in assists per game (1.44), while his 1.67 points per game clip is good for third-best in college hockey.

“Casey has been an impact player for us,” Fox lauded. “There were some guys in his class that had a little more hype, but…he’s a pretty smart player, and obviously [has] a lot of skill. It’s good to see him moving the puck.”

The Crimson will skate against the Big Red Saturday night as it attempts to earn its first four-point weekend of the season and likely dethrone Cornell from its ranked status — the Ithaca dwellers dropped their tilt on Friday against Dartmouth.