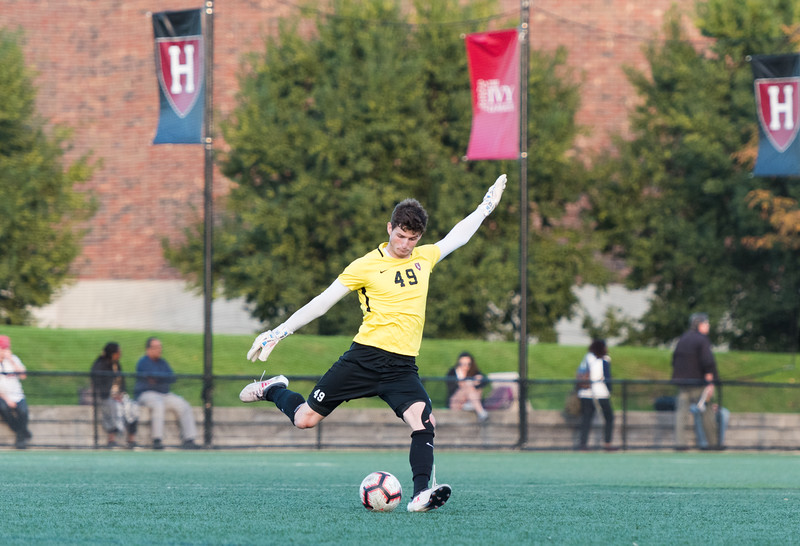 Sophomore Matt Freese will be going pro, as the goalkeeper signed with the Philadelphia Union on Friday. By Justin Chiang
By Ronni Cuccia and Eamon J. McLoughlin, Crimson Staff Writers

Harvard sophomore Matt Freese has chosen to forego his further two years of NCAA eligibility, as he signed for the Philadelphia Union on Friday. Freese spent time in the Union Academy before coming to Harvard, and will now join six other homegrown players on the Union roster. The Wayne, Pennsylvania, native, who played two years for the Crimson, is one of only two goalkeepers currently on the 2019 Union roster.

“This has been in my mind for a bunch of years, playing for the Union,” Freese said in a conference call to reporters. “It obviously means everything to me that I’m starting my career here with the people that raised me and turned me into the person and the soccer player that I am. Like Jim (Curtin) was saying yesterday, back at YSC when it was called Rocket Sports, I was involved in the first Union Juniors training session, literally when the Union were first created. Just the progression through that and the academy and with local clubs makes everything more meaningful and more special.”

Freese also boasts international experience, as he was called up to the U-19 United States Men’s National Team camp in February 2017. This was not the only interest shown last year, as just months later, English super-club Manchester United asked Freese to visit for a trial.

Despite these opportunities, Freese decided to continue his soccer career at Harvard, rather than turning pro immediately. Freese has followed the footsteps of his two older brothers by attending Harvard. While he was playing soccer for the Crimson, he did not lose connections with the Union. During breaks from college and over the summer, Freese would return to train with the Philadelphia Union and Bethlehem Steel FC.

Freese is the 10th soccer player to play for the Crimson who has had an opportunity to play in the MLS. One of the most successful of these players was Mike Fucito, one of the current assistant coaches for the Harvard Men’s Soccer team. Fucito had stints in the MLS with Seattle and Portland before returning to Cambridge as a coach.

Freese had a notable career at Harvard, finishing his collegiate career with 77 saves in 16 games over two seasons. He leaves the Crimson with a 1.82 goals against average and .778 save percentage. During his sophomore season Freese played in 13 games, and was awarded a spot in the All-Ivy League Second team. Freese also averaged 5.28 saves per game last season which led the Ivy League.

Even though there are currently only two goalies on the Union’s roster, it seems that veteran keeper Andre Blake will have the starting spot locked down in the near future. Time in goal with Bethlehem Steel this season is a real possibility for Freese though. The Union’s backup keeper, John McCarthy, as well as Bethlehem Steel FC’s keeper, Jake McGuire, have both been out of contract since the end of the 2018 season, which could mean more opportunities for Freese.

Freese holds a German passport, which would make a move to Europe in the future much more realistic, as work permits can be hard to acquire for non-Europeans. Freese briefly hinted at interest from other clubs besides the Union and Manchester United, but didn’t go into detail. Having a European passport could make it easier for Freese to make the transition into playing for a European team, but for now, Matt is excited about his professional career at the Union.

“I think that period of time is where I really put my mind to it and I kind of decided that everything I’m going to do is going toward being a professional,” Freese said. “Brad really inspired me from the national team camp. He’s such a prominent figure in American soccer history, specifically with goalkeepers. He talked to me about the honor of being able to represent the country, and he inspired me and showed me what it could be if I continue working.”