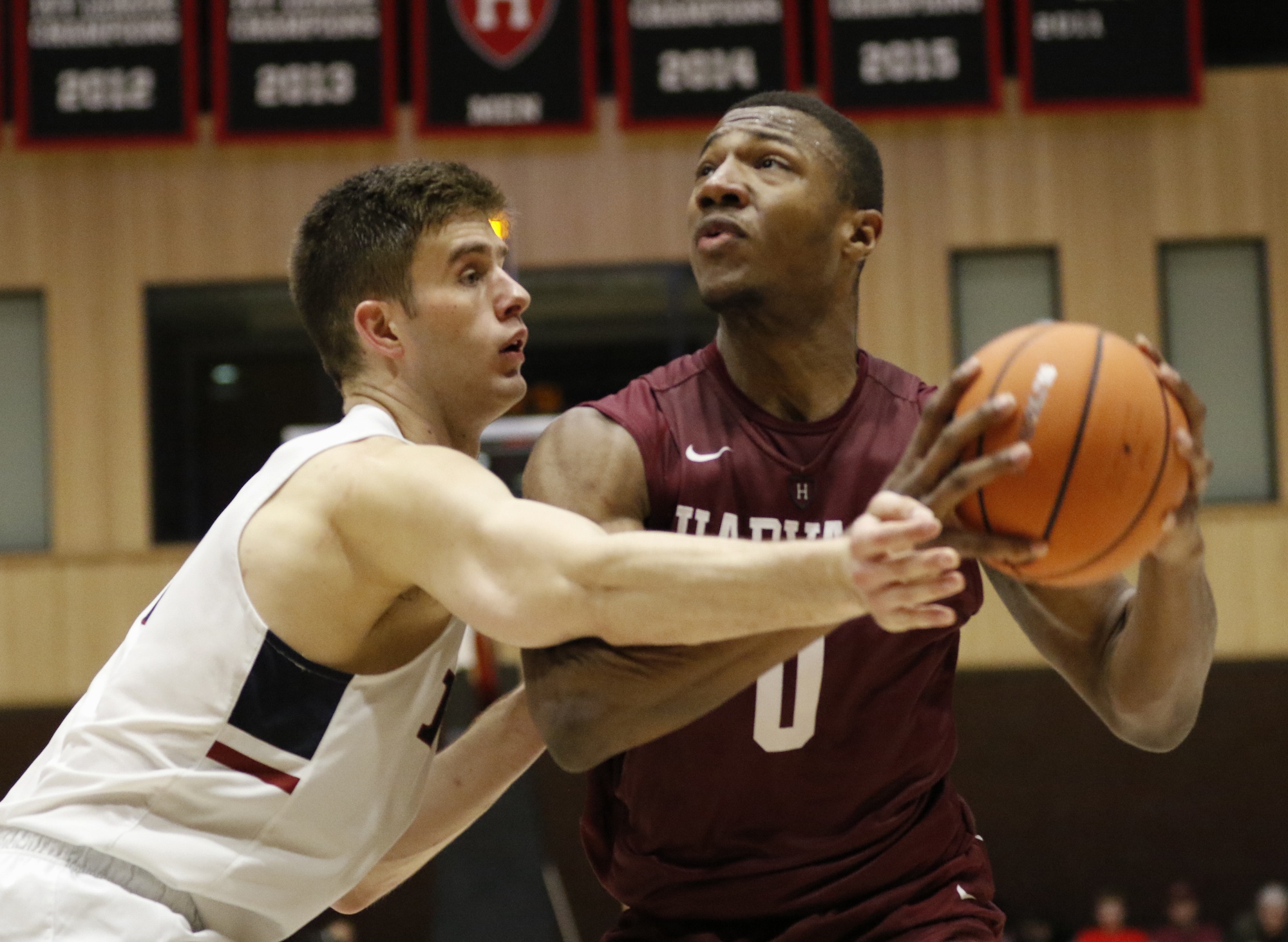 A day after sophomore guard Christian Juzang surpassed a career-high in scoring, sophomore forward Chris Lewis did the same with a 25-point game against Penn. By Timothy R. O'Meara
By Stephen J. Gleason, Crimson Staff Writer

A career day from sophomore forward Chris Lewis propelled the Harvard men’s basketball team to a 76-67 win over Penn on Saturday afternoon at Lavietes Pavilion. The Alpharetta, Ga., native finished the contest with 25 points and five rebounds to cap off a weekend in which the Crimson topped two of the Ivy League’s top teams in less than 24 hours. Harvard (12-11, 7-1 Ivy League) now sits atop the Ancient Eight standings alongside the Quakers (17-7, 7-1), with five teams tied for third place.

“A lot of it comes from the trust my guards have in me,” Lewis said. “They told me they were going to feed it inside from the beginning and, with that faith they had, I knew I’d be able to work the way I wanted to.”

Lewis was a force to be reckoned with all afternoon. Rather than double-teaming the Harvard big man, Penn coach Steve Donahue opted to let Lewis—rather than the Crimson’s perimeter players—beat his team. And beat it he did. The sophomore scored 25 of his team’s first 54 points, all while not committing a single personal foul. Lewis hit hook shots in the lane, beat his defenders with post moves, slammed down easy dunks, cleaned up his teammates’ misses, and got to the free throw line.

“Trying to play through Lewis this weekend was a huge point for us,” Bassey said. “I know for all the guards collectively, [we] thought if we can get it in there, it just makes it easier for us because Chris is such a force down there. If they’re not going to double-team, he’s just going to work one-on-one or if they do, then it makes it easy to kick it out and he’s finding us.”

Harvard showed no ill effects from a tip-off that came just 19 hours after the conclusion of its victory over Princeton. The Crimson made four of its first eight field goal attempts and a 17-3 run in the first half gave Harvard a cushion entering intermission. After the Quakers got 14 of their first 17 points in the paint, the Crimson made it a priority to pressure the visitors into tougher shots. The strategy worked wonders as Harvard forced misses on nine of Penn’s first 10 three-point attempts and an 8-for-23 start overall. On the other end, the Crimson rode Lewis and was able to get good looks at the basket, with 12 of its first 15 points coming in the paint.

“I was very impressed and I wasn’t as concerned about them being up to play and the energy, playing hard,” Amaker said. “When you get in moments like that, you get concerned that you get so fast, want to do it so well and so hard that you get sloppy or you don’t have the execution. That wasn’t the case with us. We took care of the ball, we were pretty sharp and followed the game plan.”

Following a 9-2 run to start the second half, it looked like the Crimson was on the verge of being able to coast to an easy win for the second night in a row. Lewis set his career high with 12:20 to play and the Quakers seemed incapable of stopping him as the Harvard lead grew to 16 with just under 11 minutes to play. However, Penn made it interesting down the stretch and showed flashes of why it entered the contest unbeaten in conference play. A three-pointer by sophomore guard Ryan Betley cut the Crimson’s edge to single digits for the first time since the opening minutes of the second half. A Darnell Foreman jumper made it seven with 2:32 to play.

“Saturdays in our league are always a challenge,” Harvard coach Tommy Amaker said. “Penn playing their third game this week and all three on the road with travel, the toughness and fight they have, they are very good. I was very impressed with that, with them, and even more impressed with the way our kids were able to handle this whole weekend.”

But seven was the closest that the Quakers would get. Just as he did against Cornell a week earlier, sophomore forward Seth Towns delivered a three down the stretch to put the game on ice. Towns finished with 17 points on 6-of-14 shooting. Penn missed three of its final four field goal attempts as sophomores Justin Bassey and Christian Juzang combined to hit free throws at the same clip.

Bassey is often an unsung hero for the Crimson. He is typically tasked with guarding the opposing team’s best perimeter player, with his contributions often going unnoticed in the box score. On Saturday, however, Bassey was especially aggressive on the offensive end, attacking Penn’s defense en route to four assists and six free throw attempts. All told, the sophomore finished with 12 points—his second-most in a game this season—and seven rebounds all while forcing the Quakers’ perimeter players into tough shots.

One of those perimeter players was Penn senior guard Caleb Wood. Harvard was able to hold the Quakers’ top three-point shooting threat to an 0-for-8 mark from long range. As a team, Penn converted on just six of its 24 three-point attempts.

“A lot of it is personnel,” Bassey said. “A lot of it is knowing when you can help and being very aware of when they’re moving. Especially this weekend, Penn and Princeton, they both do a great job of finding their shooters and keeping them moving off a lot of screens. It’s always nice when we practice that as a team and it’s more of a team effort especially when we’re trying to switch a lot of things.”

For its part, the Crimson also did not light it up from distance, making just five three-pointers, well below its average of 9.9 triples in Ivy League contests. However, the hosts made up for the lack of range with Lewis’ presence inside and their ability to get to the charity stripe. After attempting just six free throws in the first half, Harvard took 15 after the break, converting on 13 of them.

For as much as the Crimson benefitted from a bevy of free throw attempts, it was perhaps even more successful when it came to limiting Penn’s trips to the line. While Lewis set the bar by not picking up a single personal, his teammates followed suit by only committing nine all game. The Quakers only shot nine free throws, an impressive stat considering that they got to the line 16 times in last night’s matchup with Dartmouth.

“We weren’t over-extended to where we were always chasing,” Amaker said. “I thought we really played inside-out defensively. We tried to keep people in front of us and we were trying to trust and rely on help.”

Another consequence of Lewis’ dominance down low was that Harvard was able to do a remarkable job of protecting the basketball against Penn. A week after coughing the ball up 13 times at Cornell and two weeks after an 18-turnover performance at Brown, the Crimson had just six giveaways on Saturday. Harvard turned the ball over just twice in the game’s first 31 minutes.

“It’s very refreshing and we talked about it at the half that we did a tremendous job of taking care of the ball and we did it pretty much throughout the whole game,” Amaker said. “It’s exciting to see that our kids are growing. We are getting better. It’s nice to have that happen for these guys because they put a lot of work in to see this happen.”

—Check TheCrimson.com for updates. Full story to come after the game.