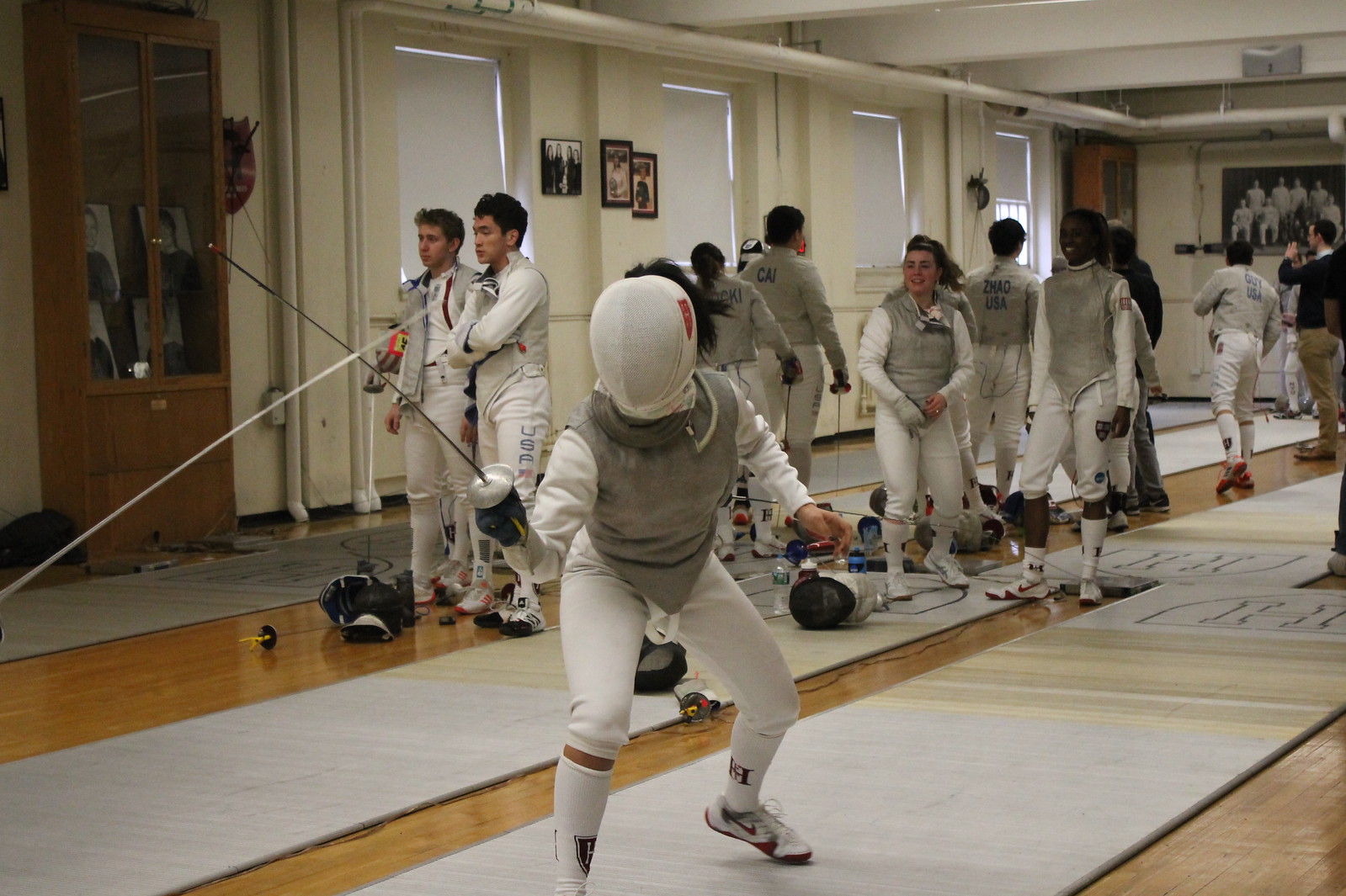 The No. 1 Harvard men’s fencing team continues to dominate the rest of the field, a point proven by its near impeccable record, with only a close loss against New York University in December at the Tradition Tournament. Since that loss, the Crimson has only continued to grow and clear away all teams that cross its path, registering two major wins at the Beanpot and at the Ivy League Championship.

“We try to have a trajectory of intensity,” junior Milo Davidson said. “In practice, that prepares us most effectively, so we spend the month before Ivies ramping up until we reach peak intensity the week before we leave.”

The hard work all paid off during the Ivy League Championships on Feb. 10 and 11, where Harvard finished with a 4-1 record over the two day tournament and shared the title with Columbia University and the University of Pennsylvania. The win was the men’s team’s 10th title, and the first since 2015. The championship finish secured the Crimson its best record in multiple years, with a 14-1 overall record and a 4-1 record in the Ivy League.

“Ivies definitely is a very draining competition both physically and mentally, and our team did an amazing job preparing for it,” co-captain Eric Zhao said. “We had a really solid few weeks of practice, so that everyone was in peak physical shape before the tournament and mentally, we were focused on the goal at hand, keeping a positive attitude through the tournament's inevitable ups and downs. In addition, for the upperclassmen on the team, everyone remembered our disappointment at Ivies last year and we used that feeling to keep us hungry throughout the entirety of the weekend.”

The team also secured two individual titles, with freshman Geoffrey Tourette sweeping the field for an untarnished 15-0 record and a plus-46 touch differential, taking an individual title in the foil category. Junior co-captain Eli Dershwitz secured an individual win in the sabre category, where he secured a 14-1 record and a plus-47 touch differential. Dershwitz will chase his second consecutive NCAA Championships individual title in March. Sophomores Duncan Rheingans-Yoo and Erwin Cai both secured top three finishes as well, with Rheingans-Yoo securing a 10-5 record and a plus-15 touch variance in the foil category and Cai ending with a 13-2 and plus-36 for second place in the sabre category.

Saturday’s tournament started with a emphatic 23-4 win over Brown University, including 7-1 wins in the foil and sabre categories. However, Harvard was unable to power past Penn, losing 15-12, for its only defeat in the entire Ivy tournament.

“During the tournament itself,” said Zhao, “especially at a competition like Ivies that is full of ups and downs, as a captain I envision myself as the mental backbone of the team. What that entails is always being and keeping the team positive, no matter how the day is going, making sure the overall team energy is high, and looking out to see that everyone is focused and channeling their effort in the correct manner.”

Refusing to let the close defeat discourage it, the Crimson pushed forward and secured a 19-8 win over Yale, featuring the team’s sabre category’s 8-1 record. On Sunday, the last day of the Ivies, Harvard faced No. 4 Columbia in a hard-fought battle, with the Crimson pushing past the Lions in a 16-11 win. The Ivies ended in a share of the Ivy League Championship for Harvard after defeating No. 6 Princeton in a 18-9 victory.

The Crimson brought the championship energy to MIT on February 14, where it faced off against the hosts, Boston College and Brandeis University, in the Beanpot Tournament. At the end of the night, the team won its 11th consecutive Beanpot championship title, the only team to ever win the trophy since its inception in 2007.

“We had a lot of freshmen this year,” Davidson said, “and the hardest part of that is always getting them adjusted to college fencing from what they’re used to. It can sometimes take a few events for them to be able to shift over to a much more team-oriented version of the sport.”

The successful transition to collegiate fencing was more than evident in freshman epee fencer Adrian Thein-Sandler and freshman foil fencer Tourette. Thein-Sandler left the Beanpot with the best record of the entire team, recording a flawless 9-0 match total, and a plus-35 touch differential, a career high. Tourette left the tournament with an equally impeccable 7-0 record in the foil category.

From a team perspective, the tournament kicked off for Harvard with a 19-8 win against Boston College, with a 8-1 record in the foil category, 6-3 in the epee category, and 5-4 in the sabre category. The margins of victory only widened as the Beanpot continued, with the Crimson emerging victorious against MIT in a 20-7 win, featuring a full 9-0 sweep in the foil category. Harvard sealed its Beanpot title with a dominant 21-6 win against Brandeis.

On the other hand, the No. 6 Harvard women’s fencing team has been on the rise since a tumultuous performance at the St. John’s Invitational in January. Following a thorough 21-6 win against NYU on February 4, the team continued to excel at the Ivy League Championships and the Beanpot Tournament. At the Ivies, the Crimson secured a third place finish with a 4-2 record over February 10-11, for an overall season record of 13-6.

The championships opened with a decisive 19-8 win over Brown, featuring a 6-3 win in the sabre category and a complete 9-0 shutout in the epee category led by freshmen Cindy Gao and Saanchi Kukadia. The wins continued with a 14-13 defeat of Yale. However, Harvard was unable to battle past No. 2 Columbia in a 19-8 loss. Despite suffering a loss, the team refused to relent, securing a 17-10 victory against Cornell featuring a 8-1 epee category record. The Ivies closed for the Crimson in a 18-9 loss to No. 5 Princeton.

Harvard left the Ivies with a third place finish and two All-Ivy individual honors. Gao and junior epee fencer Shawn Wallace were both named All-Ivy first team, a first-time honor for both fencers. Gao, the Toronto, Ontario, native, finished third in the Ivy epee category at the tournament with a 15-3 record, and new season-high plus-42 touch differential. Wallace finished the Ivies in second place in the epee category, with a 16-2 record and a season-high plus-42 touch differential. He leads the Crimson’s team in wins, with 51 total victories this year.

The title run was led by junior sabre fencer Gabrielle Tartakovsky, who earned a 6-0 record. The rest of the Harvard squad was not far behind, with six records secured with only one loss each. The Beanpot began against Boston College in a 21-6 win before a thrilling 19-8 victory against host team MIT, featuring an 9-0 sweep in the foil category. The Crimson’s energy seemed limitless as it closed out the tournament and title run with an emphatic 20-7 triumph over Brandeis, featuring a 8-1 record in the epee category.

“Looking at our record, we have maintained the strong, solid performances we had in previous years at our NYU meet, Wellesley & Tufts meet, Sacred Heart, and Beanpot," senior co-captain MacKenzie Lawrence said. “We also saw a lot of amazing individual performances at Penn State and at Ivies [where two members of the team won first team All-Ivy recognition for their stellar records]. While we didn’t quite achieve the Ivy League title this year, we, as a team, have been consistent in pushing ourselves at practices, supporting one another on and off the strip, and giving it our all at each and every competition.”