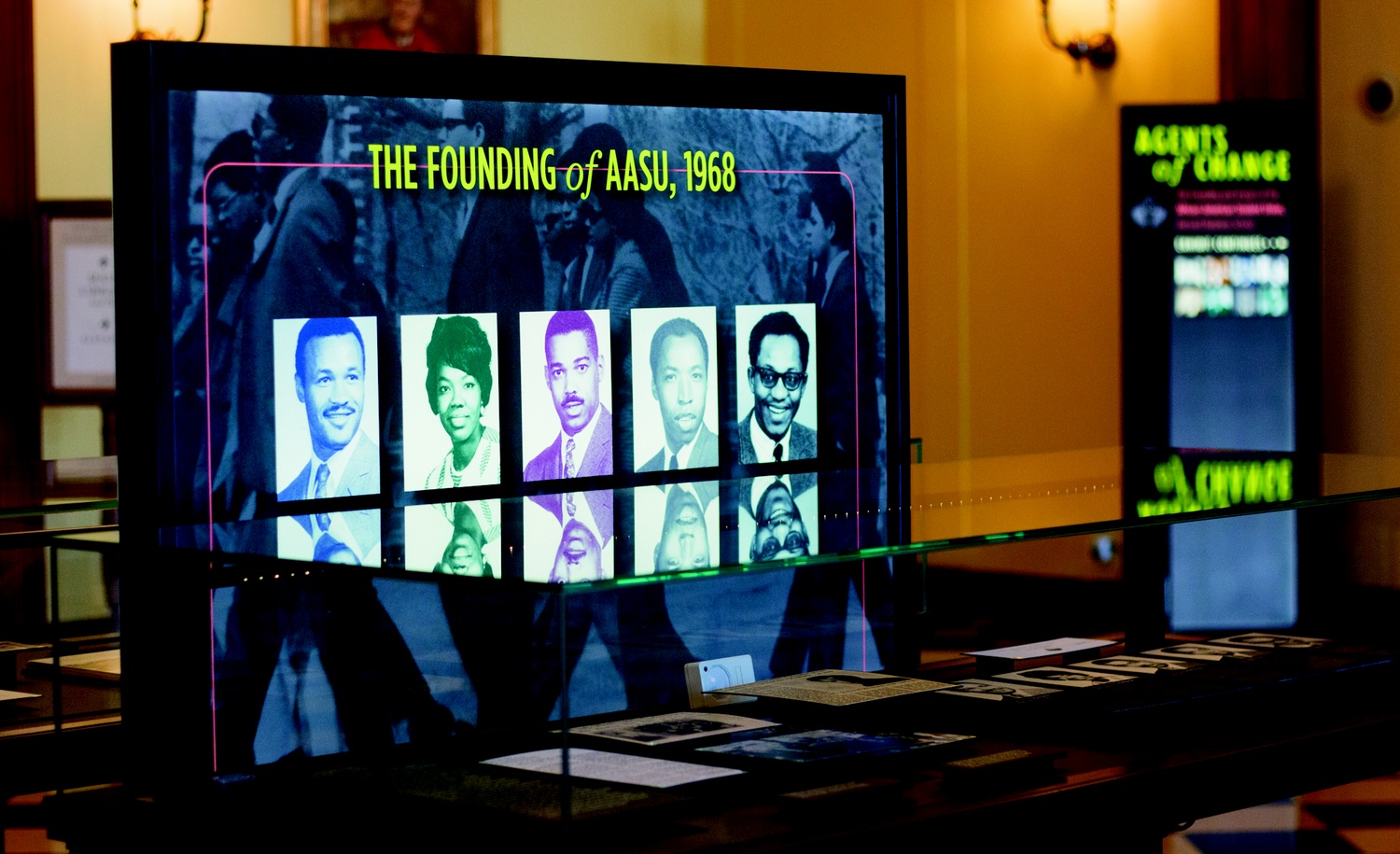 An exhibit at the Business School's Baker Library commemorates the 50th anniversary of the HBS African-American Student Union. By Caleb D. Schwartz
By Grace A. Greason and Anna M. Kuritzkes, Crimson Staff Writers

Harvard Business School will honor the accomplishments of black alumni this spring to celebrate the 50th anniversary of the founding of the school's African-American Student Union.

The AASU50 celebration—a joint effort between the AASU and the HBS Leadership Initiative—kicked off with the opening of an exhibit showcasing experiences and achievements of black alumni at Baker Library Friday. It will culminate with a conference in mid-April.

AASU50 Project Director Taran Swan said members of the Leadership Initiative have spent two and a half years planning the celebration, which will include an academic symposium on African American leadership in March.

Though AASU was founded in 1968, the legacy of African-Americans at HBS extends back more than a century, according to Anthony Mayo, the Director of the Leadership Initiative.

Wendell Thomas Cunningham, the school’s first black student, graduated in 1915, but minority enrollment remained low for the next few decades. The lack of diversity was among the primary concerns of the five HBS students who coalesced to form AASU.

The founders also worked to recruit black college students to HBS themselves. Their efforts resulted in more than a fourfold increase in enrollment of black students at HBS between 1968 and 1969, according to Mayo.

Their experiences and the history of AASU are chronicled in cases at the Baker Library exhibit. It also includes an interactive display that showcases other notable alumni and panels featuring three black professors at HBS.

The two-day conference in April will open with an alumni dinner and the premiere of a documentary that chronicles the experiences of black students at HBS. The following day will feature small-group discussions with prominent black executives and entrepreneurs as well as AASU founding members Lewis, Lambert, and Willis.

AASU has been focused on these issues since its inception. Swan, who was a member of the group in the early 1990s, said the organization has consistently reacted to topical political and social movements while simultaneously providing a community for black HBS students.

“I think a lot of what makes [AASU] different from year to year is what’s going on in society,” Swan said, adding that the group has taken part in activism involving movements such as Black Lives Matter.

While the conference is primarily “alumni-focused,” Mayo said he estimates about 90 current HBS students will attend. He said the Leadership Initiative issued a formal invitation to all black students at HBS, but the event is open to students of all racial backgrounds.

Diamond M. Richardson, a first-year student at HBS and co-founder of Thrive, an online platform that supports women of color in business and tech industries, said she is excited to attend the conference, and hopes to see non-black students there as well.

“You really do have to have not just black people working on this, but you have to have allies who feel invested in the black community as well,” Richards said. “So I really hope there are students from across the ethnic perspective at HBS who come to the conference.”