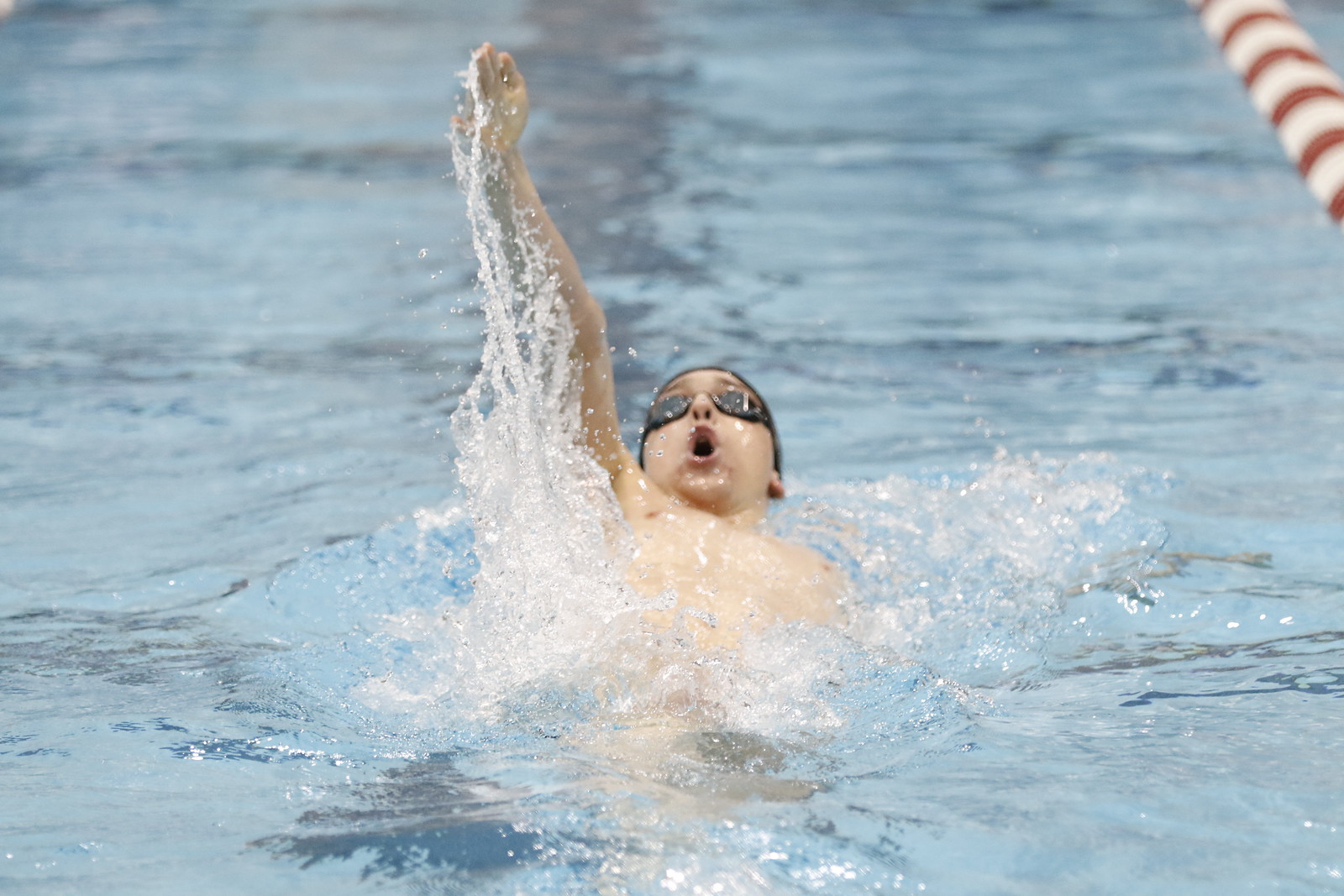 The men’s swimming and diving team has not lost in a home meet since 2012. By Timothy R. O'Meara
By Sam O.M. Christenfeld, Crimson Staff Writer

The last time the No. 21 Harvard men’s swimming and diving team faced Princeton and Yale, the Crimson fell to the Tigers by nearly 100 points, snapping Harvard’s 21-meet undefeated streak. The results couldn’t have been more different this time around.

The Crimson entered Saturday’s HYP meet with a similar run of victories, boasting 17 consecutive wins in dual competition. The stakes were the same: beat Princeton and walk away with the Ivy League dual championship, lose to the Tigers or the Bulldogs and give up an undefeated season.

“Although we don't stress too much about our dual meet record, it was pretty exhilarating to win the meet by such a huge margin,” sophomore Raphael Marcoux said.

Harvard took top honors in 14 of 19 events en route to the victory, sweeping the first three spots in four events, and placing at least one athlete on the podium in every contest.

Although the win came from a team-wide effort, the Crimson was led by a handful of standout performances.

Senior Koya Osada delivered one such performance, finishing on the podium in every race he contested and collecting a pair of first-place results. The Chapel Hill, N.C. native won the 200-yard backstroke, leading a pack of Harvard swimmers to the wall. Junior Daniel Tran took second place in the event, with the first-year duo of Eric Whisenant and Miles McAllister in third and fourth, respectively.

Osada also contributed to the Crimson’s winning effort in the 200-yard medley relay. The senior was joined by junior Sebastian Lutz and fellow seniors Steven Tan and Paul O’Hara. Lutz and Osada would team up again in the 400-yard medley relay, taking third place along with senior Ed Kim and freshman Mahlon Reihman. The race was won by the Harvard A lineup of Tan, Marcoux, and sophomores Dean Farris and Daniel Chang.

To add to an already impressive collection of results, Osada also finished third in the 200-yard IM and second in the 100 backstroke, seven-tenths of a second ahead of Tran and nearly a full second behind Farris.

Farris’ victory in the 100 back was just one in a string of commanding performances throughout the meet. The standout sophomore won every event he competed in, racking up three solo wins and a pair of relay victories. Farris’ first gold-medal finish came in the 200-yard freestyle, with junior Brennan Novak taking second and freshman Corban Rawls close behind in third. Immediately after winning the 200 free, Farris returned to the pool to take top marks in the 100 back.

The Atlanta, Ga., native would also touch the wall first in the 100-yard freestyle, obliterating his previous-best time in the event this season by nearly a second and finishing with the second-fastest mark in program history, second only to his own record in the event. Farris’ final win came in the last event of the weekend, as he joined up with Marcoux, Reihman, and Kim to capture first place in the 400-yard freestyle relay.

The Crimson’s dominant relay squad also opened the meet with a win, as Marcoux, Kim, O’Hara, and Tan beat Princeton’s second-place lineup to the wall by more than a second in the 200 freestyle relay.

“It was cool to see the win in the very first relay and to start off so strong,” co-captain Luke Morgan-Scott said. “Steven Tan’s performance in the 200 free relay was an incredible way to start off the meet. It was awesome to watch.”

Tan’s contribution to the 200 free relay was merely the first in a series of impressive swims by the senior. In an effort to rival Farris’, Tan won every event that he contested. The Aurora, Ill., native followed up the opening relay win by touching the wall first in the 50-yard freestyle with a time of 19.85. Kim collected a third-place result in the event with a mark of 20.01.

Tan also swam in the winning 200 and 400-yard medley relay lineups and picked up a second solo victory in the 100-yard butterfly. Marcoux finished one tenth of a second behind in the silver-medal position.

Marcoux also faced an unusual opponent, as his younger brother, Philippe, swims for Yale. The brothers faced off in four events, with Raphael coming away with the win in each of them.

“We've been swimming together for about ten years now, so it felt really strange competing against him on another team,” Marcoux said.

Though a fraternal connection was lacking, Harvard also dominated in the distance events. In the 1650-yard freestyle, junior Logan Houck came tantalizingly close to breaking the Blodgett record of 14:47.1, touching the wall in 14:47.39. The mark was still easily good for the win, and the junior outpaced teammate Brennan Novak in second by nearly 30 seconds. Senior Kent Haeffner and sophomore Zach Snyder ended up in third and fourth, respectively, to seal the sweep.

Novak would have a record-setting swim of his own in the second day of the meet, as he toppled the previous-best mark for the pool in the 500 freestyle. The junior’s time of 4:16.56 was more than a tenth of second faster than the existing record, set by Yale senior Kei Hyogo. Hyogo finished in third on the day, a second behind Houck and four seconds back from Novak.

Hyogo was also bested by a Crimson swimmer in the 400-yard IM, as freshman Michael Zarian took the top spot. The rookie also ended up second in the 200-yard butterfly, with fellow first-year Eric Whisenant in third.

“The freshmen did incredibly this weekend,” Chang said. “They really contributed to the excitement and momentum we held throughout the entire meet.”

The rookies’ podium results in the 200-yard fly highlighted Harvard’s success even in the events it didn’t win. Chang took third in the 100-yard breaststroke, one such event, and finished second in the 200-yard iteration.

Co-captain Bobby Ross also secured a top-three result in the one-meter dive, scoring 306.90 points to end up in second. The Crimson had more success in the three-meter event, with senior David Pfeifer taking top marks and sophomore Austin Fields finishing in third.

With a second consecutive dual meet championship wrapped up, Harvard will turn its attention to attaining outright Ivy League supremacy at the Ancient Eight Championship Meet in March.

“We’re feeling good for Ivies, but it’s a whole different event.” Morgan-Scott said. “We’re definitely excited and definitely more confident than we were, but it’s important not to be complacent, and we still have work to do.”