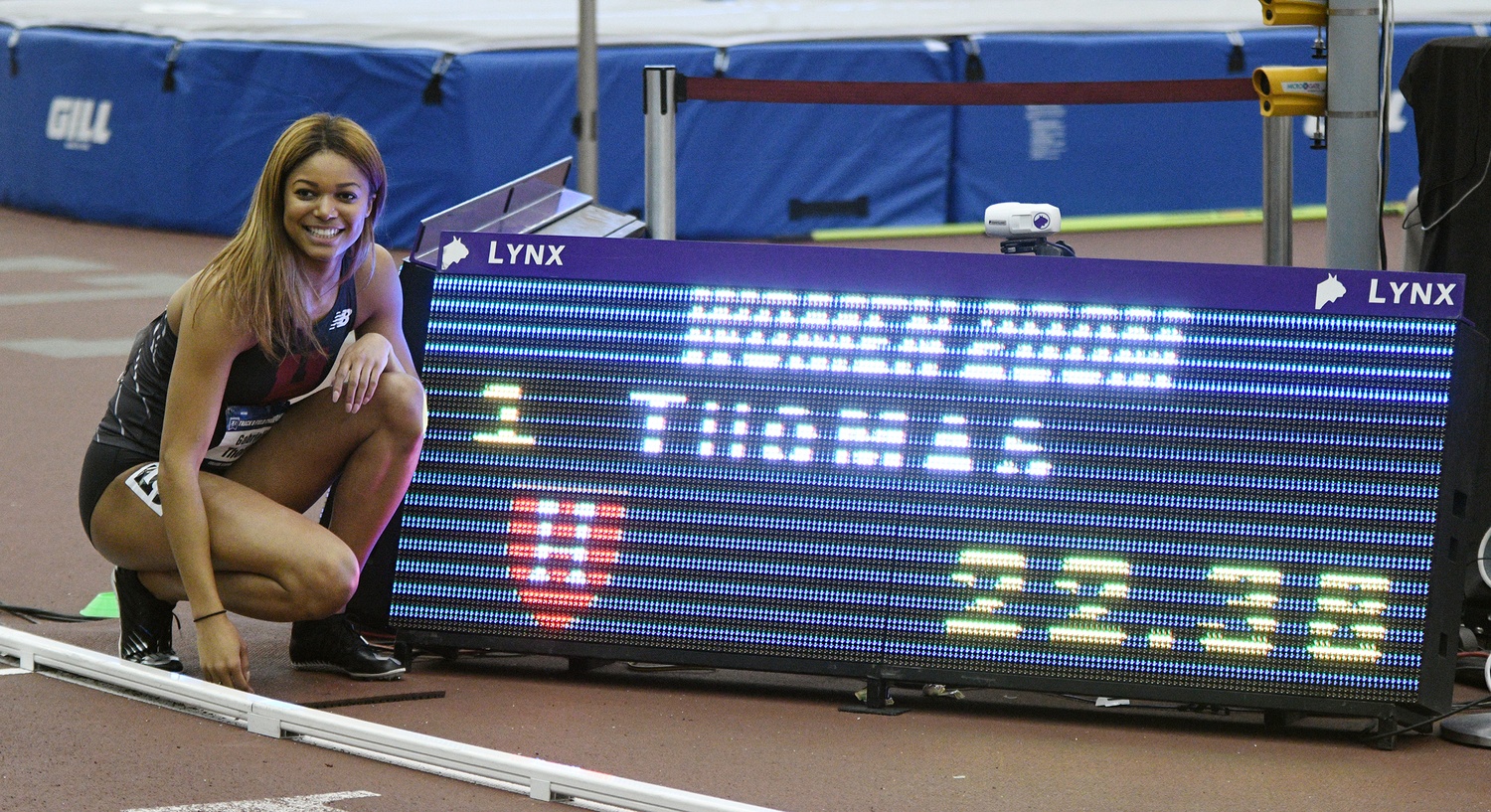 Some records stand for 10 years, others for hardly 10 hours.

The previous best time in the nation—22.40—stood for exactly a decade, originally inked into the record books by Bianca Knight, a Texas Longhorn turned Olympic athlete. The same Knight who donned a gold medal at the 2012 London Olympic games as a member of the US 4x100-meter relay team.

Thomas also dropped the school and division records, though these had only been set the prior day—by Thomas. In the preliminary heats at the Texas A&M; Gilliam Indoor Track Stadium on Friday, the Florence, Mass., native sprinted a 22.66 second race to claim her spot in the final on Saturday. Thomas’ time represented the top preliminary mark of the meet, outpacing Georgia’s Lynna Irby by seven thousandths of a second.

With the finals race separated into two heats, Thomas’ victory on Friday earned her the coveted fifth lane of the second heat, with the number one NCAA ranked Irby to her right in lane six.

In the first heat, senior Ashley Henderson of San Diego State set a facility record and just missed the collegiate best in a dash that clocked 22.41 seconds. Reaping the benefits of running in the second heat, Thomas knew as she lined up that she had to either beat, or get very close to beating, the collegiate record in order to leave Texas with a gold.

“I was thinking ‘I'm going to have to break a collegiate record if I want to win this race,’” Thomas said. “At that point all I could was take a risk and focus on my own race plan.”

So that’s what she did. Thomas jumped out to a quick lead and simply had to hold on to win her heat. As the quartet rounded the final stretch, Irby—a notoriously strong finisher—unhooked the trailer. Passing first LSU’s Kortnei Johnson, Georgia’s best gained on Thomas. However, the co-captain’s jump had been too great and Irby simply ran out of track.

As Thomas slowed after the race, she threw a sideways glance at the clock. Seeing her time, the junior erupted into smiles.

“Last year I came in dead last in this final with a really bad race,” said Thomas in the interview. “So I spent all year mentally preparing and focusing on the discipline and then I came out with the record. It’s amazing. It’s really amazing.”

Thomas is the first Ivy League sprinter to qualify for the 200-meter dash final two years in a row and the fourth women’s national indoor champion to don Harvard’s crimson and white. The first women’s sprinter to accomplish the feat, she joins the ranks of high jumpers Kart Siilats (2001) and Dora Gyorffy (2000) in addition to Meredith Rainey (1990) in the 800-meter.

“It is an amazing feeling. Surreal,” Thomas said. “People don't see the hard work and sacrifices beforehand. So it's amazing to see it all pay off. And for the world to see that you can go to Harvard and do this. You can be an underdog and overcome.”

For the second consecutive season, Thomas also earned the USTFCCCA First Team All-America honors in the race—a first for the program and the Ancient Eight.

On Friday, Thomas ran in more than just the 200-meter. The Florence Flash placed 12th in the 60-meter dash after setting the Harvard and Ivy League record in the event at the Ivy League Heptagonal Championships two weeks ago. This time, crossing the line in 7.26 seconds—.01 from her best—Thomas earned USTFCCCA Second Team All-America honors.

Thomas was not alone in College Station over the weekend. Men’s junior co-captain Myles Marshall earned a spot at the national meet in the 800-meter. Making his NCAA debut on Friday night, the junior also finished 12th in 1:48.58, a mere .41 seconds from a finals appearance. For his efforts Marshall earned USTFCCCA Second-Team All-American honors, the first member of the Harvard men’s team to do so since 2014.